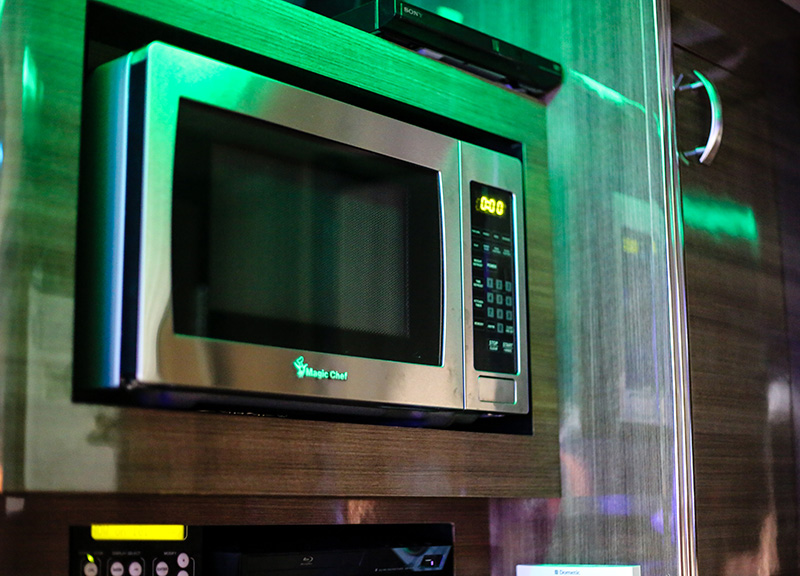 Taking Back Sunday Is Right At Home On The Road.

Behind every great band is a great van. And when these former church vans, daycare buses and plumber's work vehicles have racked up enough miles on the road, they eventually start being thought of by the band as another member of the team. Hey, we get it: It's hard to spend so many hours with band mates (both human and machine) without a few things getting broken, a few good fights taking place and lots of great memories being made. We hope that, by exploring these stories, we might get to know some bands from both North Texas and beyond on a more personal level. Check out this feature's archives here.

Taking Back Sunday has made it through that awkward post-emo, early-2000s Warped Tour era.

But while most bands of that genre and era have either disbanded or are rolling through the country playing club shows, Taking Back Sunday has moved forward by letting bygones be bygones and reforming its classic Tell All Your Friends and Where You Want To Be-era lineup for the last four years. It's a plan that's worked, too. In 2014, this lineup released new music for the first time in ten years, putting out a new album called Happiness Is. And, now, the band is touring in support of that album.

Better yet: When the Taking Back Sunday rolled through town a couple weeks back , its members were kind enough to let us behind the scenes so we could speak with them about the tour life of a band that's been around for over 15 years.

In short: These guys are used to the road. They estimate that a good seven of its past 15 years have been spent completely on the road. Lucky for them, though, the band's long since graduated from the horrors of touring vans to the comfort of riding from city to city on a legit tour bus.

Because hey, after all, these guys are still the stars of their show.

Is this one of the better buses you guys have toured on? What makes a good bus?
Shaun: “This is the best bus we've ever been on. A lot of the buses we've been have the slide-out [type]. This one doesn't, but it's way roomier. Like, somehow it just works. The thing that sucks about the slide-outs is that when you're on a long drive, and we have to leave early, everyone's still up and the front lounge gets so much smaller. You're just sitting here knee-to-knee with each other and that's really annoying. It's just having space that's nice. The bunks are nice. The TVs work well. DVR is nice to have.”

Mark O'Connell (Drums): “This is the first bus that we have USB chargers in.”
Shaun: “Yeah, because we all need to stay in touch with family back home. So, having your phone charged up all the time is very easy and convenient.”
John: “What you really want is some colorful lighting above you. And some nice glasswork…”
Shaun: ” …to marvel at.”

It's more about the creative details for you, John, isn't it?
Shaun: “It sets the mood.”
John: “Yeah, I like the flair.”
Shaun: “I'm about the functionality; John's about the flair.”

Is this bus is basically a mobile hotel for you guys?
John: “It's our house, really.”
Shaun: “Yeah, you just can't poop in this house.”
Mark & John: “That's true.”

Is it hard to make the adjustment from your real home to your tour home?
John: “You just do it because you have to — but we've been doing it so long at this point. I was actually just talking about it with Adam Morgan last night. So, we've been in bands for about a solid 13 or 14 years and, about half that time, we've been on tour. So, we've kind of lived like this for a solid seven years.”
Mark: “Yeah, to me, at this point, it's so normal. This is what we do. You're constantly packing and unpacking your bag. Bringing it into clubs so you can shower in there. Then you come back. It's just second nature. That's how life is. We don't even think about it anymore.”

How do you guys pass your time between cities?
Shaun: “Well, you drink some coffee and make fun of each other.”
Mark: “We wake up in the morning and we have this thing called 'morning talk,' where everybody drinks coffee and everybody gets rip-roaringly high on caffeine and starts yelling at each other.”
John: “I like to avoid morning talk at all costs.”
Shaun: “I stay in my bunk for an extra half hour after I wake up just to ease into the day.”
Mark: “I enjoy morning talk. It's a lot of fun.”

Sounds like it's just you, Eddie and Adam.
Mark: “And Andy. And Ray. Ray is a big filler on morning talk.”
John: “He likes to get ripped up on caffeine.”

So, after morning talk, is it just preparations for the show?
Shaun: “Then it's time for the crew to load in our stuff. Then we just sit on our asses because we are the stars of the show after all. [Laughs.]”
John: “Then we usually do soundcheck, then some interviews like this in the afternoon.”
Mark: “Gotta get a good half hour in with the wife. Gotta call home.”
John: “Maybe a FaceTime or two.”
Mark: “Yeah, y'know, look at the kid.”
Shaun: “Yeah, gotta look at the kids and say, 'Hello! Daddy will see you in six weeks! Don't forget me…'”

During that seven years of touring, you guys weren't always in buses. What's the biggest difference between these days and the van days — other than the comfort?
Shaun: “All the work you have to do in driving to the next city. That is the most exhausting part of that. Sometimes, you'll have to drive like eight hours to the next show. After the show, you're maybe loading out at midnight — if you're lucky — on an early night then driving four or eight hours after that to a hotel. Then sleeping for five, six hours and then getting back on the van. That grind is brutal.”
John: “When we had the van, I would always take the 3 a.m. to, like, 6 a.m. shift. And that was a pain.”

Back in those days, did guys have any big van breakdowns?
Shaun: “No, with Taking Back Sunday, we were very lucky. We did a whole lot of touring in a short amount of time. We bought a van new when we signed our contract with Victory Records, so we never had any problems. Knock on wood.”

Then you haven't had any breakdowns on the buses, either?
Shaun: “Well, we went through four buses in four weeks in Europe. That was a nightmare.”
Andy Sprague (Tour Manager): “The first problem was that we were given a bus from a company that we didn't order from. So then we switched out that bus, and, two days later, that bus had a broken steering column and it was stuck in an alley. Then we got Prince's bus.”
John: “That's right!”
Shaun: “It was unreal. It was beautiful.”
Andy: “First-world problems!”
Shaun: “That bus didn't breakdown or anything, but we just weren't allowed to keep it.”

Whoa. You guys had a bus immediately after Prince did?
Shaun: “Yeah. He had used it, like, maybe once, for like half an hour.”
Mark: “And it was probably just his drum tech in there or something.”
John: “He probably used it to go from the hotel to the venue one time.”
Shaun: “That string of incidents was really annoying.”

I'm sure you guys can't make too many changes, but do you guys make any modifications to the buses?
Shaun: “No. But John and Adam did build a loft in our original touring van to have a futon mattress in the back so you could sleep in that.”

What are some of your best or worst memories on tour?
Mark: “A lot of laughs, y'know, over time. We're always here hanging out, so there are a lot good times, and everybody who works with us is a family.”

Anything else you guys would like to add about bus life or tour life?
Shaun: “It's not for everybody.”
Mark: “This ain't no joke, man! This ain't everybody's game.”

“It was just a guy who was drooling on the wall, is all!”
Mark: “Yep. Something else is going on here.”
Shaun: “He was eating a lot of glazed donuts. It's just sugar.”
Andy: “And that's what leads to getting this nice bus.” 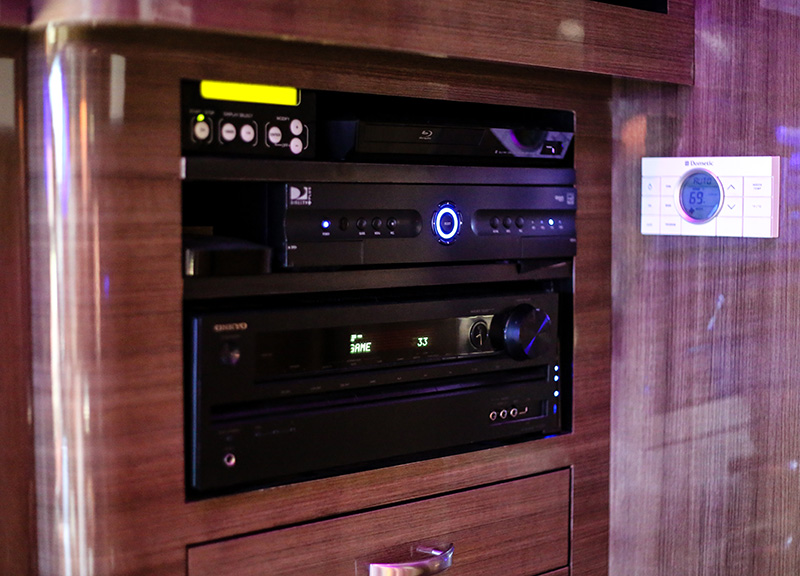 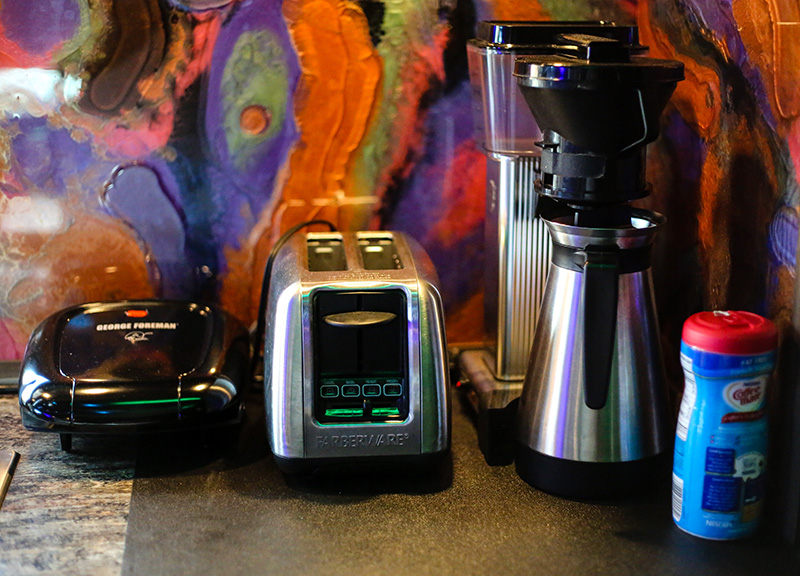 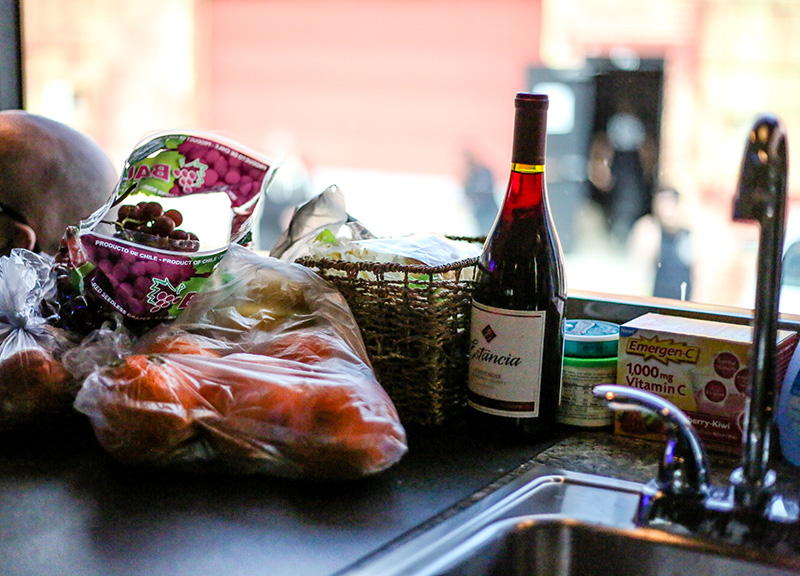 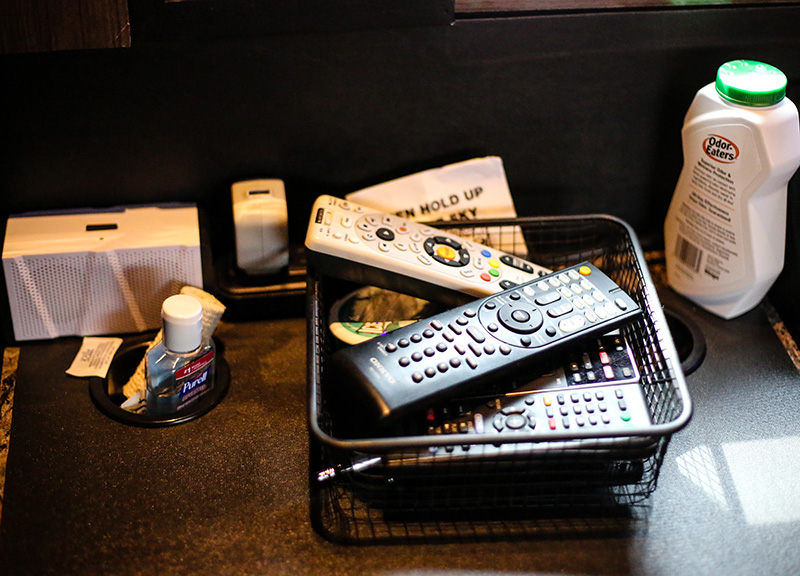 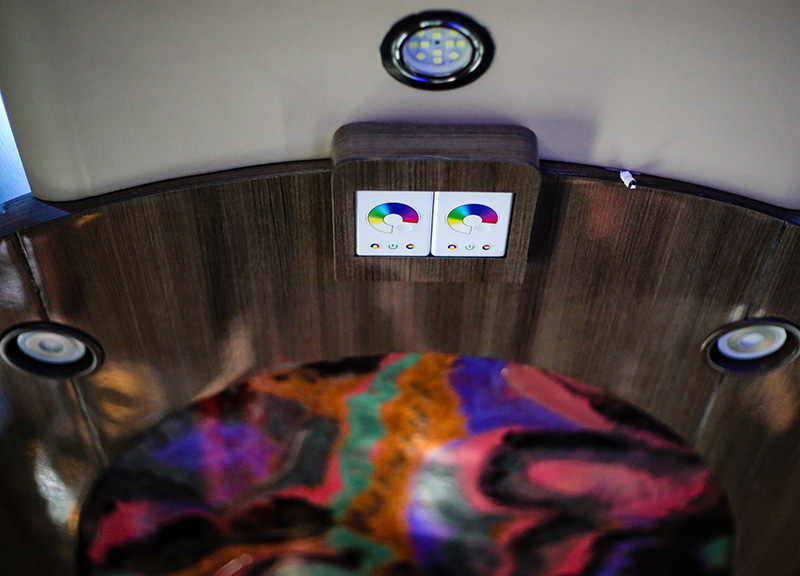 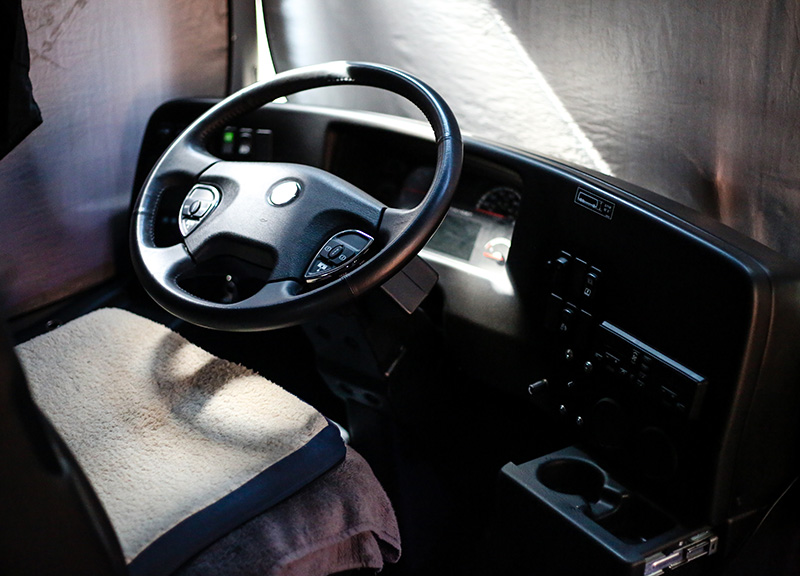 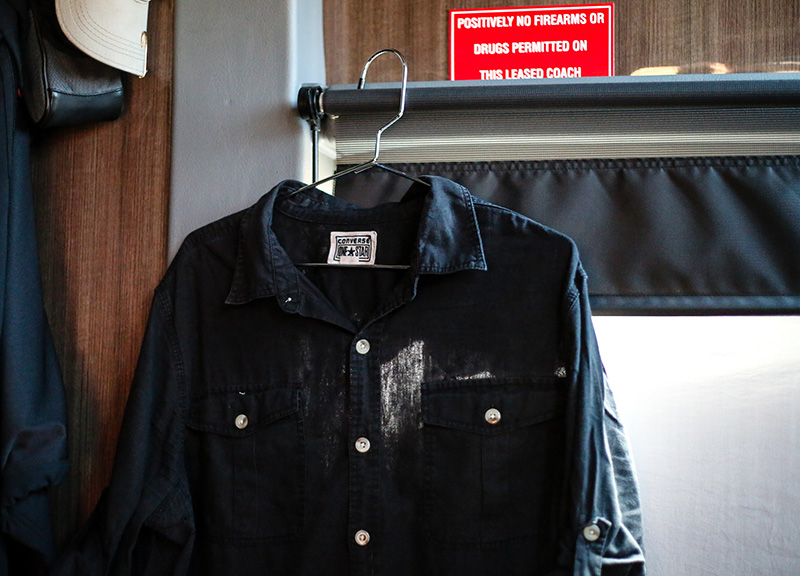 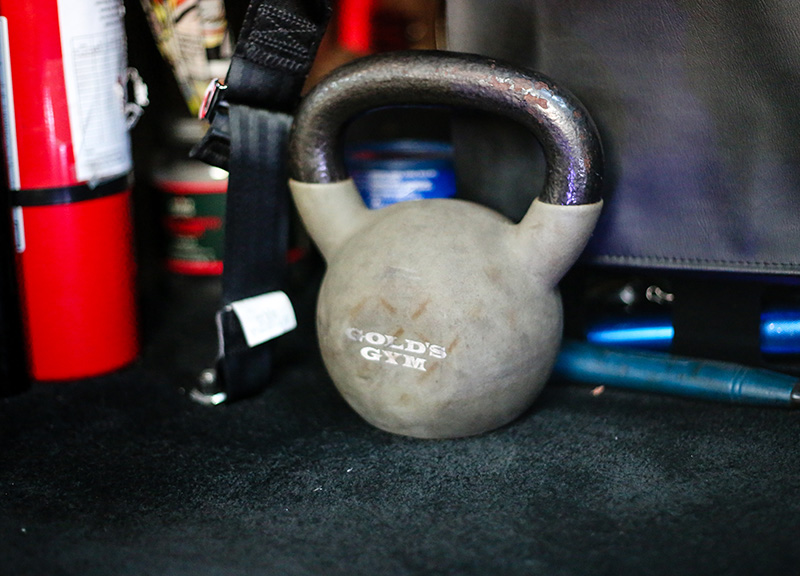 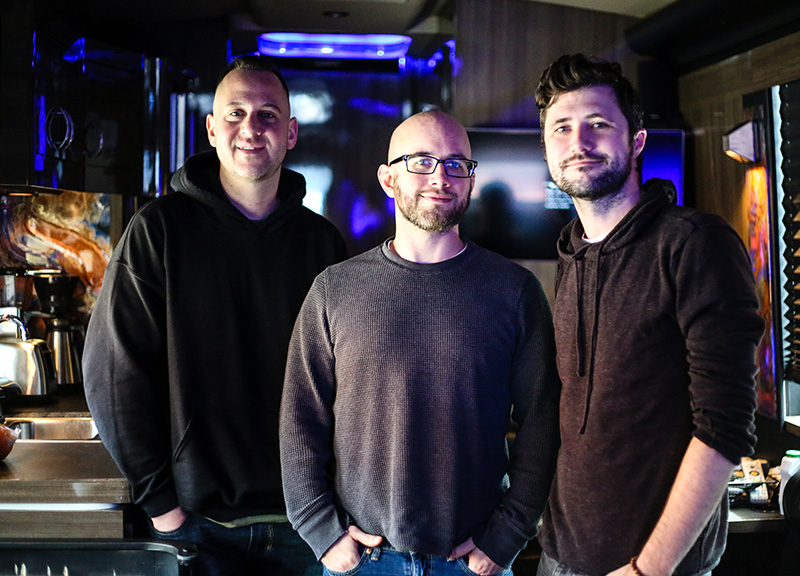 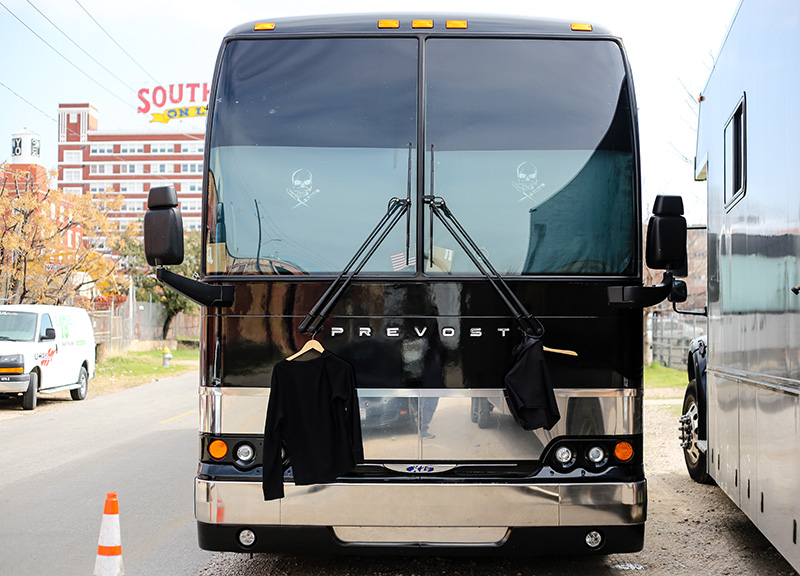 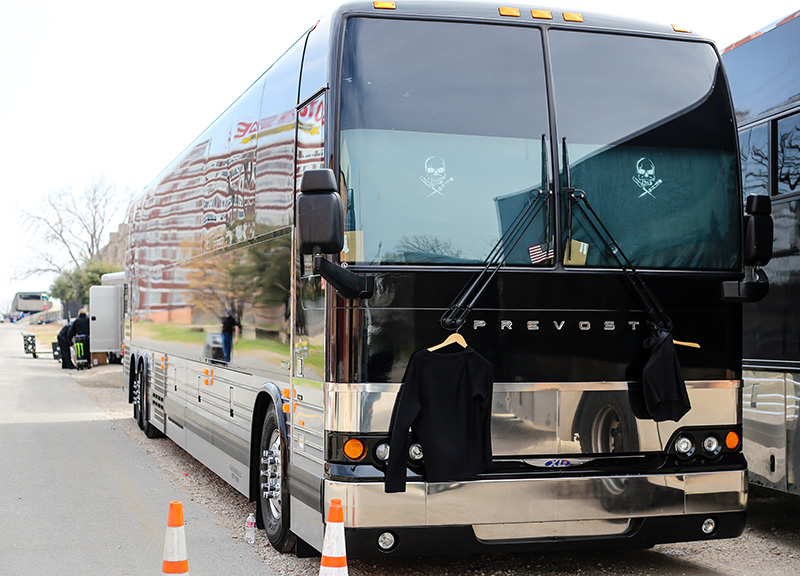 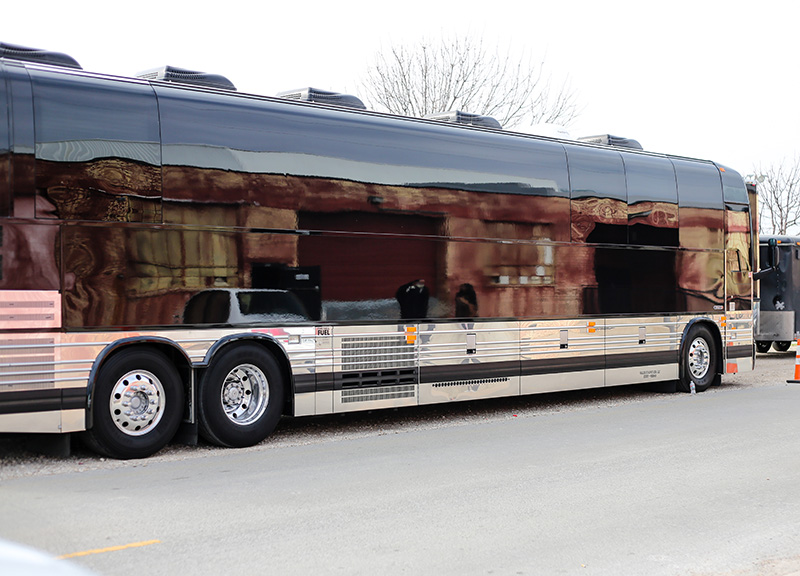 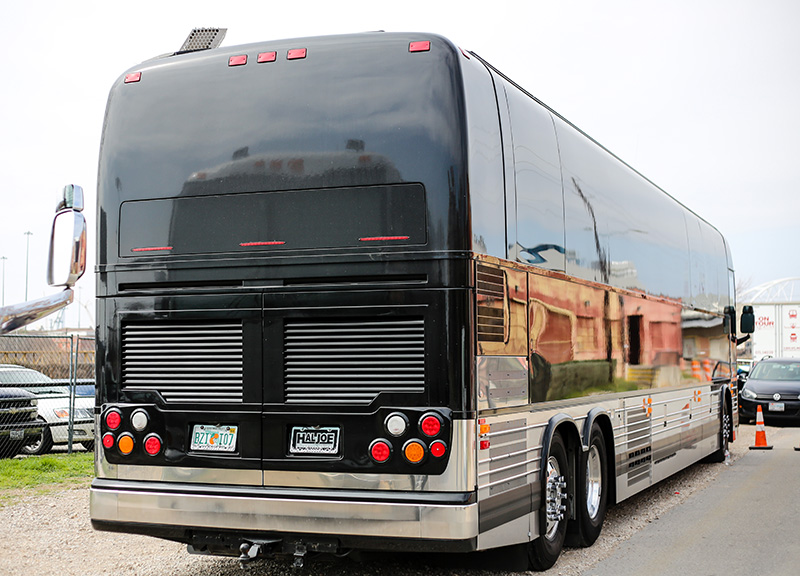 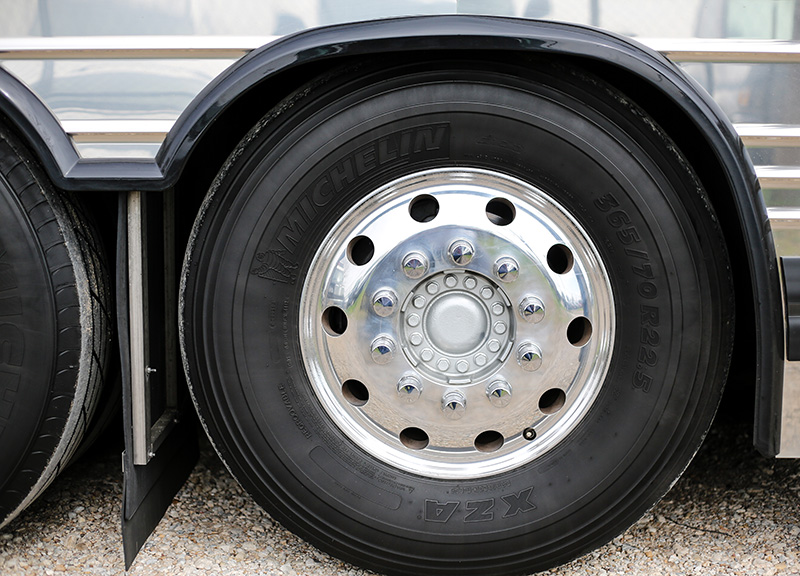