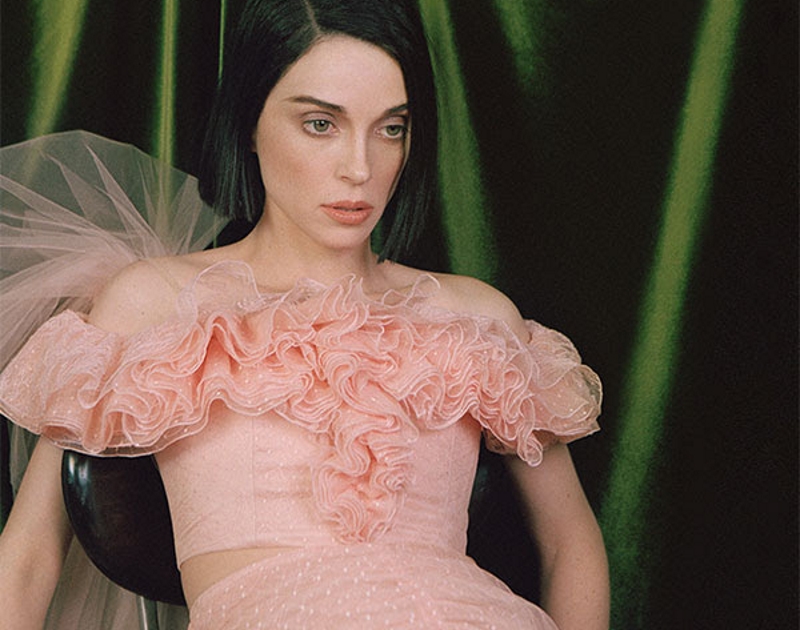 St. Vincent – “Slow Slow Disco”
RIYL: The third time being the charm.
What else you should know: “Songs are living things,” says St. Vincent in a press release her team sent out earlier today. “They grow, they evolve, they change their moods and personalities over time.” That’s true for this song, which earns its third version (and release) here. First included on last year’s Masseduction, the single was disco’d up for May’s uptempo “Fast Slow Disco.” Now, it’s reversed course again, slowed down and stripped all the way back to a solo piano and vocal thing.

Ryan Tharp – “Angeline”
RIYL: Silver bullet bands.
What else you should know: I’m having trouble pinpointing what decade this sounds reminiscent of. Is it the ‘70s, a la Seger’s “Turn the Page”? The ‘90s a la Metallica’s cover version of said tune? The ‘80s a la Loggins riding into the danger zone? I’m a fan of all those things, tbh, so in the end I guess it doesn’t really matter. Not sure if it is tied to a larger upcoming release, but I do know Clint Kirby and Jacob Furr handled drum and bass duties here, while Ryan Bingham/Red Shahan engineer Grant Jackson Wilborn mixed and mastered it.

Becky Middleton – “Storms All Over Me”
RIYL: The long game.
What else you should know: I’ve been getting press releases for Middleton’s forthcoming record for over a year now, and now it looks like Break the Fever is finally due out in November. Produced by Beau Bedford at Modern Electric, the acoustic break-up song above is a bit more stripped down and subtle than the powerhouse R&B singles she put out before this one, allowing her always-on-point vocals to do the heavy lifting.

Larry g(EE) – “Losing You”
RIYL: Getting back to work.
What else you should know: Another long-time-coming album is the next one from Larry g(EE), whose last one came out seven years ago. Co-written with Esteban Flores of Feeves, the track is about when you stop making excuses and letting your past prevent you from moving on. Here, Larry does just that, releasing the second single from his Love Things EP. There’ll be a release party for the thing on November 9 at Scout at The Statler.

Jesse Gage — 5 pm on Anna St.
RIYL: Keeping it stupid, simple.
What else you should know: The 817 scene vet (Movie The Band, Big Heaven and Bitch Bricks) and current War Party drummer just put out an album full of simple, bare bones garage rockers. He held a release show for it out in the Fort last weekend. The straight-ahead approach works here, amping up its poppy nature.

Norah Jones – “A Song With No Name (feat. Jeff Tweedy)”  & Doyle Bramhall II – “Searching For Love (feat. Norah Jones)”
RIYL: Helping hands.
What else you should know: Jones is all about the collabs of late, having released a pair of ’em in the last week. The first comes from her upcoming album and features Jeff Tweedy playing some gentle guitars. The second finds her returning the favor on a sultry new duet for Austin bluesman Doyle Bramhall II’s upcoming LP, which finds her providing harmony vox and piano twinkling.

Ronan Delisle — Fig Music
RIYL: All that jazz.
What else you should know: Since moving to Seattle with the Senor Fin boys, Ronan’s released a handful of these side project jazz records. They’ve all been really good so far. He wrote, arranged and played guitar on this one, and recruited top-notch a drummer, plus double-bass, saxophone and piano players. They recorded at the studio of Seattle multi-instrumentalist (and one half of Cock & Swan) Johnny Goss.

Tera Melos – “Lemon Grove (feat. Rob Crow)”
RIYL: New additions.
What else you should know: The Cali math rock trio (with a DFW-based drummer) has a seven-inch out on Sargent House in November. The A-side is “Treasures and Trolls,” which they’ve been playing on tour all summer. Digitally, its B-side came out this week on all streaming platforms. The cool thing, aside from its top-notch math-y goodness, is that it features guest singer Rob Crow from Pinback doing all the lead vocals.

Edie Brickell & New Bohemians – “Tell Me”
RIYL: Calling it a comeback.
What else you should know: After a 12-year gap, the New Bos recently premiered this one from their new album over at Billboard. That release, due out in two weeks, was born from the rehearsals for a reunion/benefit show last year for non-profit Dallas art school La Rondalla. “We don’t really rehearse because we improvise so much,” guitarist Kenny Withrow told Billboard.”[But those rehearsals yielded] a little group of songs, and there was something about them that told us to go into the studio and record them. There was just something there. It was very emotional for us, right from the beginning.”

coolboy3000 – “CHOP SHOP”
RIYL: Having Ferrari posters above your bed.
What else you should know: I think we’ve said it every time we’ve featured one of his tracks, but damned if the best part about CB Three Stacks is his Windows 95 mimicking website. It’s a real gem. This smooth little electronic number about stealing cars is pretty good, too.