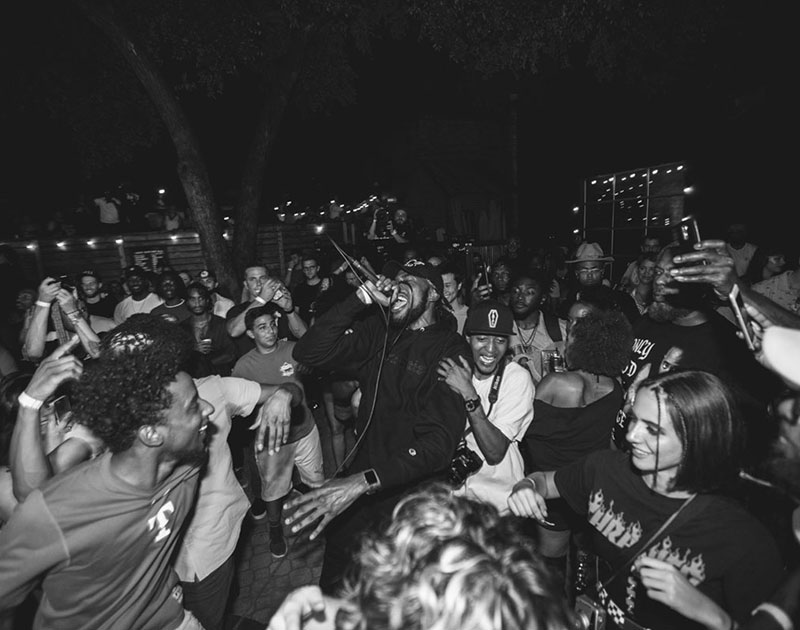 
Rikki Blu – YOU CAN’T MAKE ME
RIYL: Going through war and making it out
What else you should know: There is a lot to unpack from this debut album by Pleasant Grove’s Rikki Blu, and we probably won’t be able to do it solid justice in this little blurb here. Just know that this 14-track album deserves a solid listen. Why? Because Blu is one of the more passionate lyricists you’ll ever come across, and his music here is an interesting and introspective look at his childhood and coming of age in one of the roughest sectors of the city. Sonically, we’re blown away by the versatility Blu is able to deliver on his tracks. Listnening to this, you’ll continuously re-read the track list looking for features. You won’t find much there, though. This is all Blu.

Kaela Sinclair – “Don’t Follow”
RIYL: Leaving and moving on.
What else you should know: The last 18 months have been a whirlwind time for Sinclair. After being selected as the newest addition to M83, the Denton singer has toured the world, performed at triumphant homecomings and even made some late-night TV appearances. But she hasn’t lost sight of her solo work. “Don’t Follow” is a hometown production through and through, as she produced the stellar track with McKenzie Smith of Midlake, recorded the tune at Redwood Studios in Denton and called up Daniel Hart of Dark Rooms for the strings arrangements. The track comes from a three-track mini album titled We Watched The Lights Go Out that Sinclair promises is just the first of three to come. It is currently streaming on all music platforms.

Diego Money – Go Diego
RIYL: Going state to state switching timezones.
What else you should know: We’re pretty sure this is Diego Money’s 1,000th project of 2017. Sure feels that way, anyway. But, more than just a prolific rapper, Diego’s efforts manage to genuinely compel, too. This effort is no different. Only five songs deep, Go Diego is a quick listen, but it offers up a lot more variety than we’ve heard on some of his earlier releases. “Timezone” feels like the first time we’ve heard some vulnerability from the artist, and we’re really digging it. If that’s not your style, don’t fret; “Blitz” and “Legendary Swag” will satisfy your braggadocio thirst.

Tre Savage817 – “Right Amount”
RIYL: Running it up so they can’t even count it.
What else you should know: On this “Right Amount” track, Tre Savage817 seamlessly switches from a tempered, confident delivery to a melodic delivery that eventually picks up pace into a rapid flow that will really hook your attention. It’s pretty fucking impressive. It’s even more impactful when you go back and listen to his lyrics and hear that his emotions are driving the change. “Right Amount” has us looking forward to Tre Savage817’s next track, for sure.

Ian Olney – “Atlantic”
RIYL: Experimental solos.
What else you should know: If we’re being honest, there are moments on Herrick & Hooley tracks where frontman Ian Olney comes off a little too sharp, if not outright whiny in his delivery. It’s one of the very few criticisms we have with the trio’s jazz-infused R&B tunes, though. And on “Atlantic,” a solo track from Olney, he delivers a wonderful vocal performance that teeters between unreachable falsetto and plain whispers. Either way, it’s superbly endearing, and the overall smoothness of the track makes this an immediate favorite of ours from the Herrick & Hooley gang.

Luna Luna – “80’s Tune”
RIYL: VH1’s I Love The ‘80s.
What else you should know: Luna Luna has been dancing around the elephant in the room for a while now, and this track finds them beating any critic to the punch on calling out their aesthetic. While we don’t love the grammar on display — the apostrophe should be before the decade, symbolizing the replacement of the “19” from the equation, unless we’re wrong and this song is weirdly possessive — “80’s Tune” is very much an ’80s tune, much like all their previous releases that we’ve loved. The quintet isn’t reinventing the wheel with their retro affinity for this era, no. But they deliver these songs with such a sincerity and fun energy that we’re not growing tired of these callbacks.

Mega Drive – “Visceral Grit ’92”
RIYL: Acting like you were into the Stranger Things sound before its sounds came out.
What else you should know: The genre may be getting a little saturated now, but the mysterious, ’80s-influenced Dallas synth composer Mega Drive has more than a few skins on the wall. The anonymous producer has been slinging dark, ominous synth-heavy tracks for some years now and we’re happy to report he’s still evolving. “Visceral Grit ’92” features a lot of elements we’ve heard from his releases in the past, but it works in a lot of progressions and complementing layered sonics that haven’t always been in his songs (and maybe made them a little monotonous). Here’s to growth!

Gaston Light – This Side of the Truth
RIYL: The National, if they were from the South.
What else you should know: Jason Corcoran delivers his lyrics with an intensity that reminds us of The National’s Matt Berninger. But the guitar work on display in his new album shores up his southern roots real quick. “This Side of the Truth” comes from Gaston Light’s new EP, Newport Drive, which released today and reveal’s the singer’s depth. Find it on the streaming platform of your choice.

Home Eviction – Home Eviction EP
RIYL: Bummer Vacation.
What else you should know: We really don’t know too much about this new trio, whose first collection of demos was just recently uploaded to Bandcamp, which is where we stumbled across it, rather fortuitously. Filled with post-punk angst and killer guitar tones, this project reminds us a lot of the efforts of Bummer Vacation, another North Texas act with similar qualities, but that can’t seem to decide if it’s still together or broken up. Well, if it’s the latter, Home Eviction sounds ready to move into their void.