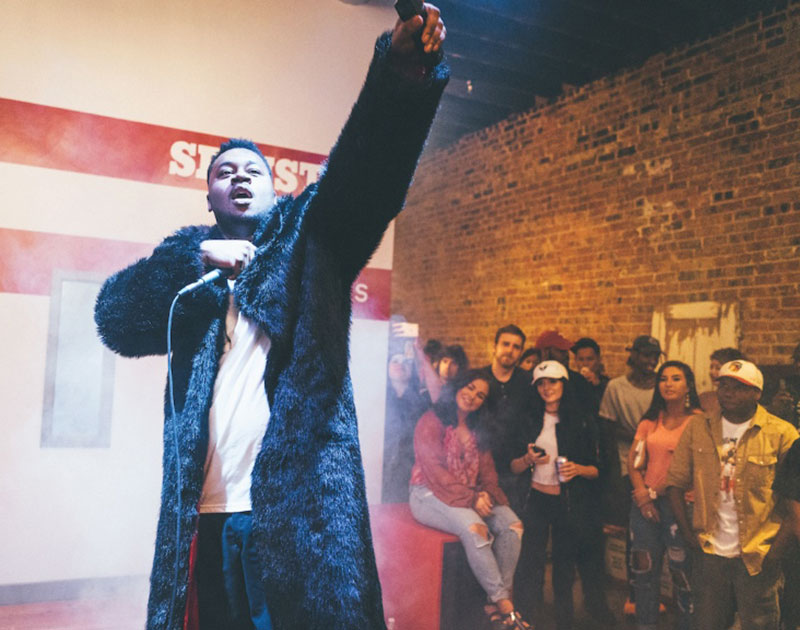 Buffalo Black – “American Colors”
RIYL: Collectivism.
What else you should know: “American Colors” is one of the more beautifully shot all-local music videos you’ll ever see. Directed and shot by Cinderblock Studio, the slow-panning shots of the closed-down, now-vandalized, Pearl C. Anderson Middle School serves as a poignant complement to Buffalo Black’s stinging commentary on education and civil rights in America.

88 Killa – “Cruz Control”
RIYL: Gettin it in and moving it out.
What else you should know: New 88 Killa is always a good time. Even if we know the rapper is dead serious about his claims of being undefeated as he raps at the beginning of this song, there’s always an underlying nature to Killa’s work that always makes it extra fun.

Monique Renee – “Funk You”
RIYL: Dancing to Janelle Monae and Bruno Mars.
What else you should know: Monique Renee’s latest single is a funk dream. From the opening claps and horns the song instantly gets you moving. Then Renee piles on with an energetic and soulful voice, but it’s not until the very end that the artists truly shows off the capabilities of her voice.

jACQ – “Waiting For You”
RIYL: Not waiting on anyone.
What else you should know: jACQ swung for the fences on this one. Her new single “Waiting For You” was produced by super producer Mantra, who recently produced Rihanna and Future’s “Selfish.” So it shouldn’t be any surprise that the song is already receiving attention from over 20 markets across the country and feels like it’s on the brink breaking out.

Charcuterey – “Take A Hint”
RIYL: Playing a sad, sad song.
What else you should know: Trey Johnson may be best known from his work in Sorta, but this latest solo work is a down-tempo, simple acoustic tune that’s rife with beautiful songwriting. Get lost in this poetic work and the accompanying video that feels just as trance-inducing.

KoolQuise – Love Lost In [Translation]
RIYL: Not knowing how to feel.
What else you should know: KoolQuise is one of the city’s more underrated contributors to the hip-hop scene. For years, he’s been a part of the TeamFromNowhere alongside -topic, Donny Domino and more, but on his own, his music doesn’t seem to get the attention it deserves. On this seven-track project, Quise shows off his laid-back soulful brand of hip-hop with fantastic wordplay, cadence and lyricism.

Milo Velour – SUPER SAIYAN
RIYL: Thinking no one is better than you.
What else you should know: Dallas by way of Philadelphia rapper Milo Velour isn’t going to blow you away with his tight rap skills, but the confrontational spirit of his words and unorthodox beat selection that makes SUPER SAIYAN an interesting listen. There’s a definite chip on his shoulder that’ll have listeners relating to his style.

7eventhirty – Jentleman Jack
RIYL: Being busy, stressing, grinding and yawning.
What else you should know: 7eventhirty has so much credibility that we won’t even give him shit for naming one of his tracks “Cash Me Outside How Bout Dat.” Since moving to Dallas from Jackson, Mississippim several years agom he’s released some of our favorite projects (like Heaven’s Computer) and contributed to the works of some of our favorites, like Gensu Dean and Rob Viktum. Someone of his caliber can quote Bhad Bhabie as much as he’d like, because Jentleman Jack is another great release.

Dead Flowers – “Let Me Be”
RIYL: Being you.
What else you should know: Dead Flowers’ new song and video premiered earlier this week via the Dallas Observer, and along with that premiere came news of plans for the band to release their third album of the same name. According to the Observer’s Eric Grubbs, the new album is a mix of blues, folk and punk rock (as heard on the title track), combined with vocalist Corey Howe’s whiskey-soaked rasp.