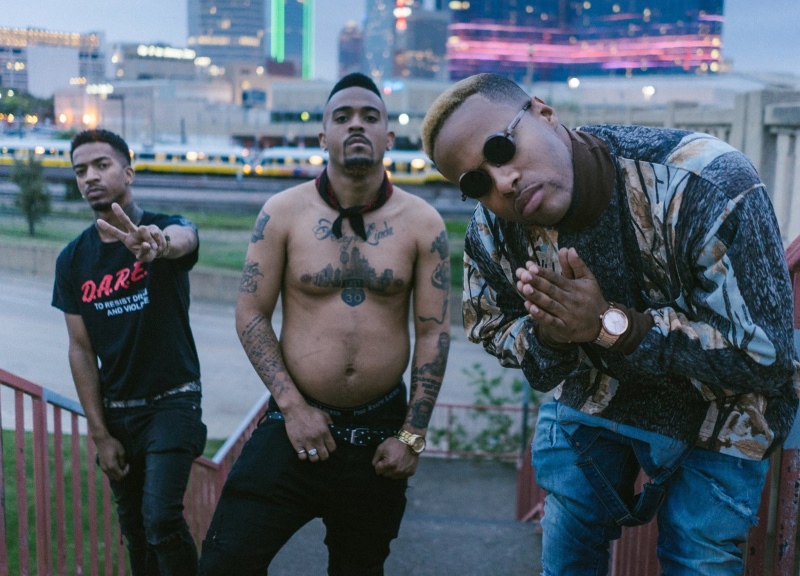 Xiu Xiu — “Just Lay Still.”
RIYL: Unsweet dreams.
What else you should know: Fresh off its Twin Peaks soundtrack tribute album, the California art rockers put their twisted spin on a cut from local darling John Congleton & the Nighty Nite's recent debut LP. The twisting, electronic take isn't so much a cover or remix as it is a complete, dark and eerie reworking. But we're guessing Congleton wouldn't have it any other way.

Danny L. Harle — “Can't Sleep Love.”
RIYL: Glee: The Remix.
What else you should know: Here, PC Music's Danny L. Harle gives Arlington acapella group Pentatonix the remix treatment. (On an unrelated note, he also released a Chairlift remix this week.) And, actually, the blank canvas an a capella group provides makes it the perfect remix territory, with Harle pitching up their clean vocals, and pairing it with semi-abrasive, dancefloor-ready beats. Says the producer himself: “I love the world of Pentatonix, it is so extreme and absurd. Who could have guessed that a vocal group could become such a chart smash phenomenon? It is exactly the kind of bonkers thing that hits just the right chord with the present day mainstream. I am very interested in this grey area between experimental (bonkers) and popular music. I also love nice melodies, and the fact that all of the music of Pentatonix is so clearly crafted by people who have a real passion for vocal arranging and melody was another reason why this remix was appealing to me.”

Erykah Badu — “Come and See Badu — the official BADU PARTY NEXT DOOR DUET REMIX.”
RIYL: Slow jamz.
What else you should know: Last month, Erykah posted some social media messages about her and Andre 3000's son Seven graduating from high school and getting accepted to all four colleges he applied to. Oh, the places he'll go! This duet with Drake protige PartyNextDoor, she says, is dedicated to the Class of 2016. And, to think, all we got was a mound of student loan debt when we graduated. Maybe she'll adopt us.

Siberian Traps — “New Friend in Town.”
RIYL: The quote-unquote Fort Worth sound.
What else you should know: These guys may have hailed from Nashville once upon a time, but after moving to the 817 a few years ago, they've assimilated mightily into the local music scene. The band's latest LP, Stray Dogs comes out June 17, and it couldn't possibly sound any more Fort Worth-y. Recorded by Fort Worth's Britt Robisheaux, mixed by the band's drummer Peter Wierenga (who also plays with Fort Worth's Jake Paleschic) and mastered by the progenitor of the modern Fort Worth sound, one Jordan Richardson, they've certainly followed the template. Regardless, it's a steady and capable pop rock album that no fans of Oil Boom, Son of Stan, Kevin Aldridge, VVOES, et al, will be able to deny.

Maren Morris — “Rich.”
RIYL: Steve Miller's “The Joker” and/or Weezer's “Beverly Hills.”
What else you should know: This song's supposed to be country, no? And isn't Morris supposed to be, like, that genre's next big thing? Then why bite a so-so classic rock number that's already been stolen countless times over the years? Ah, fuck us. She's going to be a huge star when her Hero LP debuts on June 3. She's already well on her way in that regard. And deservedly so. For whatever shortcomings this particular tune has, she's a monster pop country writer and performer.

Daniel Zeigler — BirdHouse.
RIYL: The intro theme songs to talk radio segments.
What else you should know: We've oft heard Grandaddy's output referred to as “music for sad robots.” By that token, the new record from ex-Endless Thoughts and Teenage Cool Kids member Daniel Zeigler might be just what the doctor ordered — a digital Prosaic, if you will, to really brighten those robots' outlooks. It's a perfectly poppy and lighthearted lo-fi affair that crowd is likely to really dig.

The Outfit, TX — “Bear Necessities” (feat. Diego Money).
RIYL: Dollar dollar bills, y'all.
What else you should know: It really is money over everything in TOTX's latest single. “I don't need no bitch, all I need is cash,” they boast in the chorus. Elsewhere, they talk about the high-end jewelry their success has afforded them. These guys are going to really explode sooner or later. Already something of a known commodity the country over, it's only a matter of time before TOTX really emerges as the South's next big rap outfit. They grind too hard not to. Rarely do two weeks go by without us getting another new single from them to post in this column — and, real talk, this is one of our favorites yet.

Post Malone — August 26th.
RIYL: Talking about practice.
What else you should know: Though he scored an opening slot on Bieber's tour with only a handful of released tracks, Yung Posty's been having to open and close those shows with “White Iverson” — hey, just like he did that one time at Trees! — mostly because he hasn't the material for a longer set. But now, with the ballsy move of releasing this new mixtape within a day of Chance the Rapper's first mixtape in three years, Post simultaneously proves he's no one-hit wonder and, furthermore, that he might be one of the best doing what he's doing right now.

Cover image via The Outfit's Facebook page.
No more articles