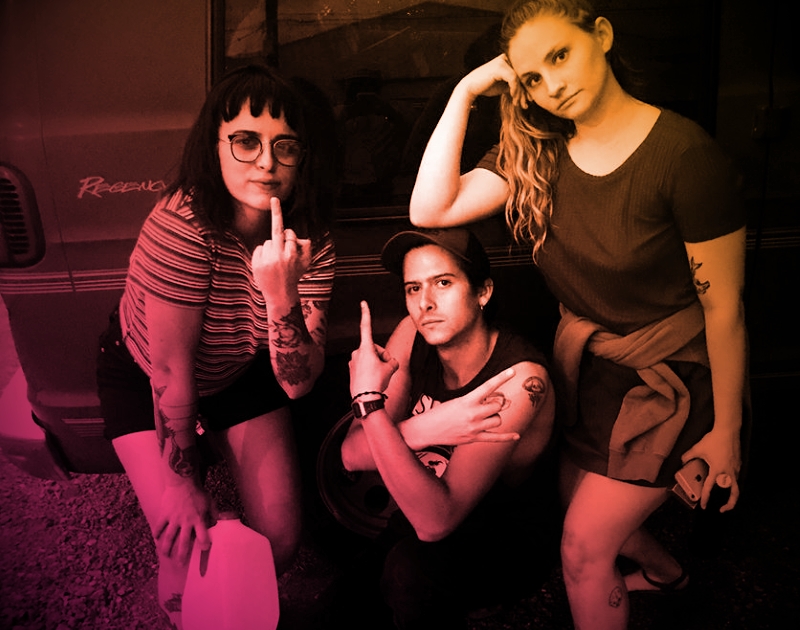 Thin Skin – “Go To Hell (Bohemian Raphsody).”
RIYL: Stoning me and spitting in my eye.
What else you should know: Healthwise, thin skin is a condition where skin tears, bruises or breaks quite easily. It’s most noticeable in older folks and, in its most extreme, tissue paper-like cases, it’s called crepey skin.

With regard to this noisy AF Denton power trio, it’s most assuredly a misnomer. Because in most cases, you don’t dish it out as pointedly as these ladies do if you can’t, in turn, take it. And boy can they spew out the venom.

In some cases, like 2016’s delightfully indignant ”Trump is a Pig,” they rightfully string together an eloquent string of curses at our Commander in Chump, calling him a “racist fuck, mother fucker, misogynist shit, greedy bastard, cock sucker.”

The band’s latest LP, I Stole This Off The Internet, is full of a similar brand of snark, inside jokes, obscure references and plenty of snarl. Take the – we’re guessing intentionally misspelled for reasons we wouldn’t get — “Go To Hell (Bohemian Raphsody)” which spits out a pettiness we haven’t heard on record since Be Your Own Pet’s “Becky” — and that one was initially nixed by the band’s record label.

Anyhow, they really let some “bald bitch” have it on this one, yelling “Jen told me that she doesn’t like you / Cry to your buds that we don’t wanna play with you” over a blast of instrumentation that somehow sounds both louder but more straight forward than the now-defunct Party Static.