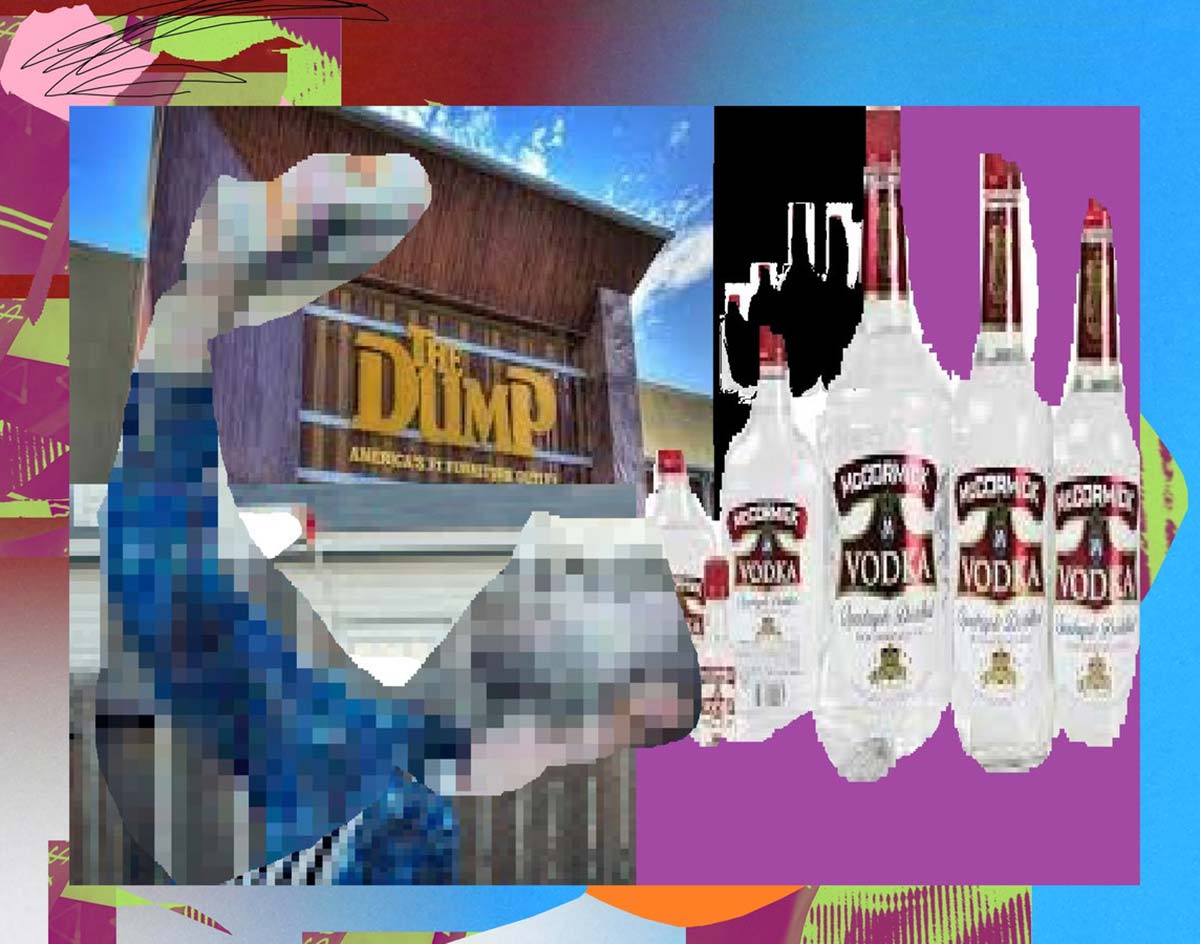 Cig Oasis — “Parachuting”
RIYL: Drinking a $6 bottle of McCormick Vodka at a furniture liquidation sales event
What else you should know: Denton experimental musician Matt Burgess (Eat Avery’s Bones, Flesh Narc, Problem Dogg) has somewhat deviated from the cacophonous noise rock of his other projects and drifted off into the electronic music frontier with his new solo project, Cig Oasis.

If you know anything about Burgess at all, however, you will know that everything he does is aberrant by default — and this project is no exception. You might also know just how prolific of an artist he is: This month alone, Cig Oasis has released three EPs.

The first EP released by Cig Oasis in April was Wasted At The Dump! Its cover portrays an intentionally pixelated picture of the namesake furniture outlet’s storefront next to some bottles of the notoriously dirt-cheap McCormick Vodka which, unsurprisingly, are also intentionally pixelated. This ethos of surrealism is perhaps best captured by the EP-closing cut “Parachuting,” which is among the release’s longer cuts at a staggering one minute and 39 seconds long.

Right at the song’s introduction, Burgess engages in some absurd and profane lyricism: “Cool, cool, asshole / cool, cool, balls / cool, cool, shit / cool, cool, piss.” He sings these lyrics in auto-tune and over a beat that combines a drum machine and synth instrumental.

Of course, that’s only the first six seconds of the song.

After the “Cool, cool…” lyrical passage, Burgess offers up the following lyrics: “Can’t believe the pool of piss was covered in a pool of shit.” He does so in a manner that’s a little similar to Daft Punk, only — again — far more soaked in auto-tune. When this vocal effect reaches its culmination, an intentionally excessive use of hi-hats comes into the picture.

Then, at the 38-second point, Burgess screams out of nowhere and returns to the aforementioned “Cool, cool…” refrain. He repeats this again at the 1:07 mark.

As juvenile and irreverent as the lyrics to “Parachuting” are, the song adheres cohesively to a B-A-B-A-B structure, and the instrumentals are actually better than those of most electronic acts that take on more serious demeanors.

If the late Wesley Willis played the Kraft Punk character on The Eric Andre Show, it would probably sound just like this track, which would indeed provide the perfect soundtrack to buying a $600 Tempur-Pedic mattress on President’s Day while drinking a fifth of McCormick Vodka at… [cue the quaint, nasally voice] The Dump!