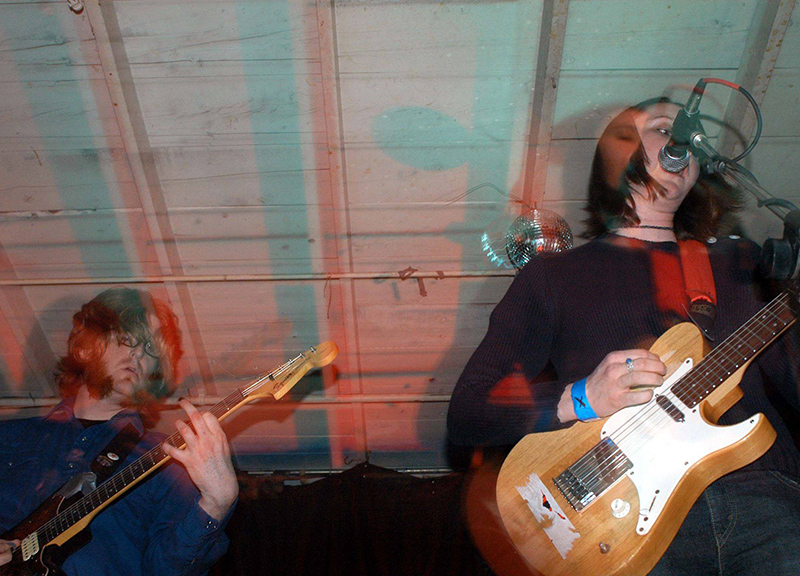 On Its Final Weekend, Record Hop’s Scott Porter Reflects On The Legacy of Rubber Gloves.

Over the years, Scott Porter has served in various capacities at Rubber Gloves, taking on every role from bartender to booker to door guy to performer to regular. This weekend, his band Record Hop will play a reunion show at the revered Denton venue/dive bar/rehearsal space — its first in four years. Then, one day later, the venue will close its doors for good. Few know and love the space more than Porter. And that’s why we asked him to pen a love letter in Gloves’ memory. It will be missed.

No matter your age or how long you’ve lived in Denton, you get into the habit of measuring time in semesters. After all, the city has two universities right in the heart of its downtown, so the population swells and shrinks with the school year.

At the beginning of every fall semester, you can count on a few near-miss head-on collisions as kids figure out the one-way streets surrounding the campuses and the square. After the end of the spring semester in May, you can count on getting a beer faster at the bar.

Because of Denton’s in-and-out nature, and its existence as a place where there’s an influx of new citizens every six months, the memory of the city is short. Every year, new kids show up and make their own fun. Eventually, they make their own scenes. It’s a beautiful thing, and it is to be supported.

Yeah, the townies sure love to talk about the good old days. But they’re all good old days. Everyone gets to run Denton for 10 minutes. And then you get to move on.

You move on to a new life at 25 and offer touring Denton bands a place to crash in Portland. Or you move to East Dallas at 30 because there are no jobs in Denton for your graphic design degree and you’ve finally become defeated by the commute. Or you buy a house on the other side of University Drive at 40 and form opinions about which Kroger is Denton’s best Kroger.

But no matter where you land, the kids keep coming back every semester. And it’s hard to stomach the thought that next semester’s crop of wide-eyed, fringe-minded artistic movers and shakers won’t have a Rubber Gloves Rehearsal Studios to call home. Again, they’ll make their own scene. But it’ll be a little trickier moving forward.

Things I’ve been at Rubber Gloves Rehearsal Studios: a poseur, a fan, young, a rock star, a failure, a talk show host, a roadie, stoned, old, a bar-back, wasted, a door person, in love, a shitty booking agent, heartbroken, motivated, an OK happy hour bartender, someone else, myself.

I’ll forever be thankful to owner Josh Baish and the entire Rubber Gloves crew for all of that. I know I’ll see them around, but I’ll miss seeing them in the beautiful dark space they shared with us for so long.

It’s going to be a total bummer/fucking killer weekend.

P.S. If anyone has any idea where my bands can rehearse now, please let me know.