[Q&A] Ron Bultongez Is Ready To Be Googled. 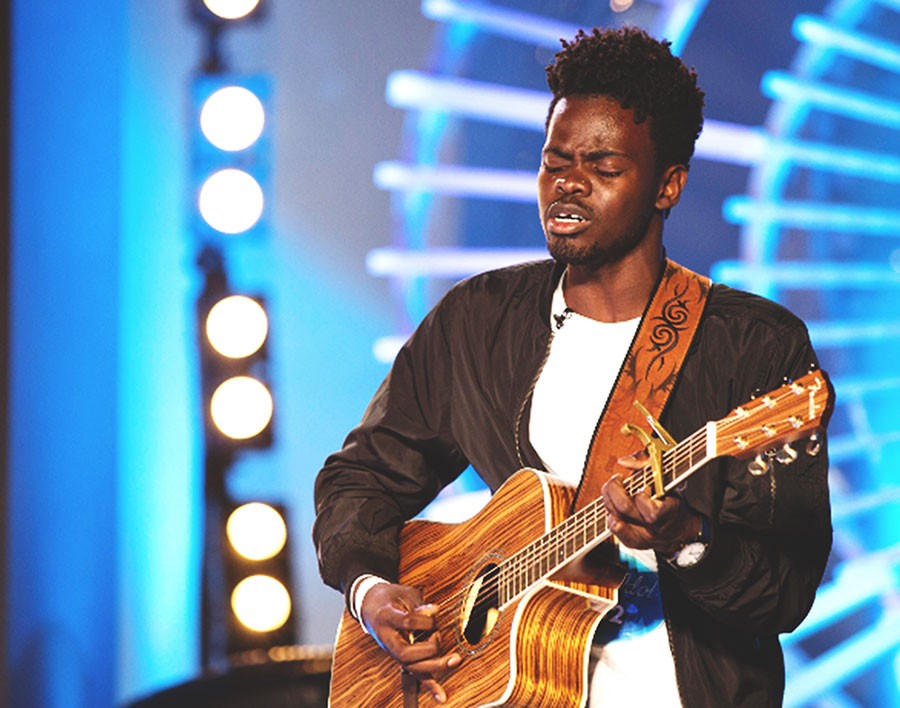 Following His Dramatic Audition On The 16th Season Premiere Of American Idol, Plano’s Ron Bultongez Is Ready For The Internet’s (And Chipotle’s) Attention.

Just as expected, it didn’t take long at all for a North Texan to show up in the premiere of the 16th season of American Idol. Only two auditions into the new season, audiences got a look at Plano’s own Ron Bultongez.

Singing James Bay’s “Let It Go,” Bultongez got a mostly positive response from the judges — and from Luke Bryan, especially, who described himself as “excited” by Bultongez’s talents. Unfortunately, Bryan’s fellow judges were less convinced: Katy Perry wasn’t thoroughly convinced that Ron had discovered his identity as a performer yet, thinking he needed some more work before heading to Hollywood — a sentiment with which Lionel Richie, who appeared to be visibly struggling with his decision, eventually agreed.

Hearing that news, Bultongez just looked super defeated. And, as the show broke to a commercial, the mood inside of The Brixton at Plano’s Shops at Legacy immediately soured. It was a packed house at the venue on Sunday night as friends, family and fans gathered to watch as two confirmed area Idol contestants — Bultongez and McKinney’s Harper Grace — make their television debuts. But with that commercial break, the celebratory din that had filled the room to that point suddenly gave way to near silence.

Before long, though, that silence would be replaced with elation. As the show returned, the judges continued their debate over their decision about Bultongez, with Bryan repeatedly saying, “I should have fought harder for him.” After a short back-and-forth, Richie finally got up and asked Bultongez to return to the stage — at which point a confused Bultongez was told that Richie had overturned his vote.

The whole place erupted in applause. It was a cool moment, for sure.

Also cool? Just a few auditions later, Grace was up to the plate. Before her time in front of the judges, the show shared a 2012 clip she performed the “The Star-Spangled Banner” at an FC Dallas soccer game as an 11-year-old — only to be lambasted far and wide for being one of the worst renditions ever heard. After that day, Grace explained before her audition, she made a dream board of the things she wanted to accomplish in her future career in music — among them auditioning for Idol. But on Sunday night’s season premiere, she did more than just that: By singing an original song along with a rendition of “Young, Dumb and Broke” by Khalid, she won over the judges and confirmed her place alongside Bultongez in Hollywood.

First, though, the two joined one another on stage in Plano. After the show ended, Grace and Bultongez put on a surprise performance for the crowd on hand at The Brixton. First, Grace opened with a few original songs, then the two sang a duet together and, finally, Bultongez and his band closed out the night.

Somewhere amidst all that, we got the chance to chat up Bultongez about how his life was about to change.

So I know you’ve been traveling a lot because of the show. How does it feel to be back home?
It’s amazing to be back home! The support that I have from the City of Plano and surrounding places is amazing, so it’s good to be back in that environment.

And you get to watch the premiere with your friends and family. How would you describe what you’re feeling right now?
Super weird! I actually just saw my commercial for the first time yesterday, and it’s been running for a while. People were sending me videos of it, and that was the first time I ever saw it, so it was really weird. I think it’s special to have so many friends and family and fans gather in a one place and watch because I will only ever premiere on American Idol once for the first time, so it’s really special to share that with all of them.

I heard that a flight attendant recognized you on the way here based on that commercial. Is that true?
Yeah, she was in L.A. and we were flying to Dallas, and she was like, “Oh, you’re on American Idol!” and she told me how she was going to be voting for me and wishing me luck, so it was pretty cool.

Look at you making fans before even being on the show! Obviously, Harper Grace is here hosting this party with you as well. What’s it like to be representing North Texas with such talented competition?
It’s awesome! Harper and I, ever since first meeting, we just really clicked. We’ve become good friends. So, while she is also a contestant, I see her more as a friend. She’s really talented.

Speaking of other performers, can you tells us a song that you’re listening to on repeat right now?
The song that I’ve been jamming to a lot lately is the new John Mayer, “Still Feel Like Your Man” — I think it’s because there is something going on with John Mayer and Katy Perry, and it’s, like, really weird to have met Katy Perry and also be a huge fan of John Mayer. I feel like I’m almost involved in the whole thing.

How about a message to share with people who might be discovering you and your music through the show?
I think that to go from a guy who was just playing football and had dreams and hopes to play professional football one day then transitioned to music? The support I have already received from the North Texas area was outstanding, and they basically helped me get to where I am. So just a huge thank you and, regardless of how I do on the show, I hope that they can keep listening to the music. I have a lot of cool things in the works. I’ve been writing a lot of stuff that I’ve been inspired by lately. And, also, if anyone wants to hook me up with a Chipotle card…

OK, well, if someone wants to do that, how can they reach out to you?
If they want to stay updated with what I’m doing, they can follow me. My Snapchat, Instagram, Facebook and Twitter are all the same: @RonBultongez. And if they want to listen to the music, Spotify, YouTube, Apple Music, all that, it’s just “Ron Bultongez.”

So, just Google you, then?
[Laughs] The cool thing about Google is, even if you just spell it close enough, it will find it.