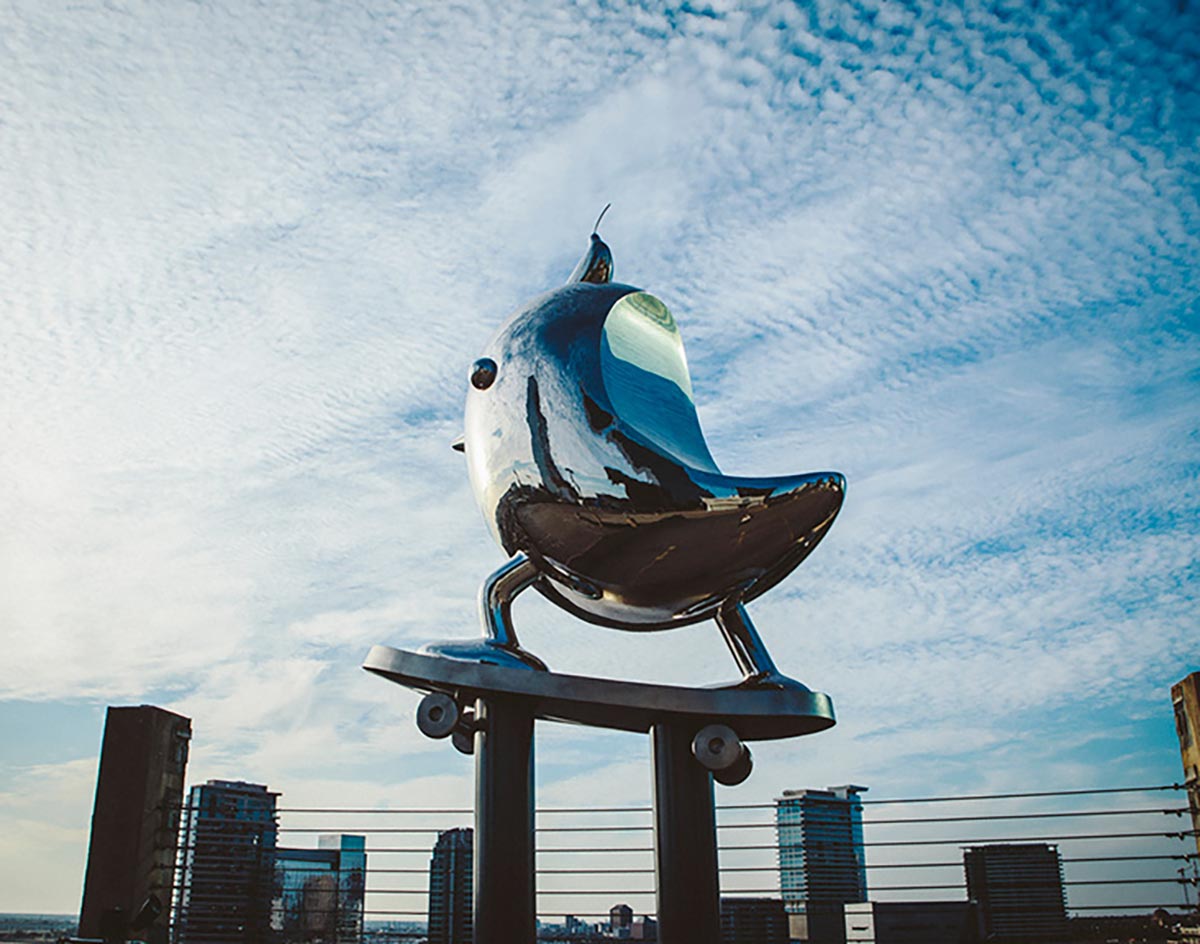 As Dallas’ First Modern Public Skatepark Hits Its Design Phase, We Catch Up With Dr. Clinton Haley Of Skate Parks For Dallas About The Plans And What Comes Next.

Back in 2017, Dallas voters approved a $261.81 million parks bond that would allocate $4 million of its funds toward building Dallas’ first public, poured-in skatepark.

That bond’s passage was a major deal, as Dallas remains one of the only major cities in the U.S. without a free modern skatepark for action sports enthusiasts to use. But, even four years later, Dallas skaters still haven’t seen any parks pop up.

The city’s design-bid-build contract for the park was won out by the Florida skatepark building company Team Pain, which recently set up a virtual meeting along with a survey to discuss with the community what is possible at the new park and what Dallasites want out of it.

Currently estimated to be anywhere between at 30,000 and 75,000 square feet, the park is tentatively slate for a late 2022 opening near DART’s Bachman Station at Bachman Lake, providing an ease of accessibility for skateboarders around the city.

There’s an important symbolic significance in Dallas’ first modern public skatepark going up at Bachman Lake, too: In the ’80s, there was actually a skate shop at Bachman called Skate Time that sold one of Dallas’ most influential skateboarders his very first skateboard. That skater, Mike Crum, went on to become one of the best in the world while providing aid to charitable institutions. (He also opened up his own 4DWN skatepark, which has become a home for all kinds of skaters in the city — including ones focused on sober living.) Bachman Lake was also back then the home of Dallas’ famous clown ramp, which gave vertical rise to the careers of Dallas’ greatest skateboarding legends.

But, even with this city’s rich skateboarding history, Dallasites looking to propel their skillsets on their favorite wooden toys were forced to do so at a private skatepark or in the streets — which can be dangerous and, at times, illegal.

That’s why Haley and Nick DiCarlo founded the nonprofit Skate Parks For Dallas and started to work with the nonprofit Dallas Parks Foundation to start lobbying for the skatepark that voters approved four years ago in the first place.

In the wake of recent progress in the park’s development, we reached out to Haley to discuss his work with Skate Parks For Dallas and the next phase of construction now that the bond roll-out has finally in motion. He was more than happy to indulge us, saying, “Anything that will further skateparks in Dallas, I’m all for.”

For starters, what’s your position at Skate Parks For Dallas, and what do you do there?
I’m one of two co-founders of Skate Parks For Dallas. We felt that getting a nonprofit organization status would be important as far as representing an organized voice for skateboarders and action sports enthusiasts in Dallas. We lobby the City of Dallas to build public skateparks for us. We are grateful to the Dallas Parks Foundation, who let us be under their umbrella. We are a kind of a subsidiary of the Dallas Parks Foundation.

I think you’re right that the city needs that voice in the conversation. But what’s the story on how it all got started?
I leaned heavily on people who had done this before. Carter Dennis and Barry Blumenthal from San Antonio and Houston, respectively, helped guide me. The Dallas Parks and Recreation board is very busy with so many other issues within the city, so I think it was Barry who said we should talk to the parks foundation. They help the parks and rec department follow through with projects that the city is interested in, but doesn’t necessarily have time or funding for. I called the director of the Dallas Parks Foundation and told him we needed a skatepark in Dallas. He said, “When do you want to talk and where?” They were very amenable to hearing our needs, and Nick DiCarlo — currently the treasurer of the foundation — really took an interest and has been integral in idea forming along with the social media aspect of everything. They have proven an amazing resource for the last several years on this project.

Can you talk a little more about why you see a need for this kind of movement?
So, I love places like Guapo and 4DWN, but we started to see that — sometimes, and despite best efforts — private skateparks can have unforeseen problems. We realized there was a need for a public skatepark just like other major cities have, where kids aren’t at risk of losing their park and they can access it any day, at any time — just like you can a playground or tennis court — and for free. I think that was an important piece in the puzzle. Plus, almost every major city in the United States has a modern poured-in concrete skatepark. Dallas is an awesome city, and we need to keep up with the needs of its citizens.

And this all came to a head in 2017 when they actually passed a $4 million dollar bond for the project?
Right. Dallas Parks Foundation helps connect us with the Dallas Parks and Rec board. We had some conversations with them and Dallas City Council members Omar Narvaez and Adam Medrano, who saw what a public skatepark could do not only for their district constituents but also the city as a whole. So, they decided to use money from their discretionary funds in that 2017 bond program, which was $2 million each to come to that $4 million total represented on the bond. We are definitely in debt to those council members, and Jesse Moreno, now the new council member in District 2, as well. He had already been an advocate for skateboarding as Adam Medrano’s Dallas Parks Board appointee during that whole process.

It’s 2021 now. What’s taken this project so long to come to fruition?
In a big city, I don’t think anything happens terribly fast. The 2017 bond program had a pledge to have all the projects approved in the bond underway within five years. We’re in the fourth year now, going into the fifth. I think they prioritized Downtown Dallas parks like Pacific Plaza and Carpenter Park. There was also an issue out at Bachman Lake; there was a question of whether or not the footprint of the lake was going to shrink, and there were going to be issues reinforcing the dam. Based on the neighborhood and citizen input, the city had to rectify those issues before anything around the lake could get under way. Currently, the Bachman Aquatic Center is under construction, and the skatepark will follow that.

Can you tell me about the bidding process for actually building the skatepark?
There are only a certain number of projects the city can do a design-build on. That quota was already filled. This project is a design-bid-build. There are two different processes. One, skatepark builders can bid for the design phase, which is what we are currently doing. Then, once the design phase is complete, they will send out another request for qualifications on the construction phase. That’s more of a city rule. Right now, since Team Pain has won the bid for the design phase, they’ve conducted a virtual meeting that described to the community what to expect from a modern skatepark and to answer any questions and concerns. The forum was open to skateboarders, BMX riders, inline skaters and scooter riders to give them ample opportunity to provide any ideas or suggestions on what they would like to see in a skatepark at Bachman Lake. From what I understand, there will also be an online survey where people who couldn’t make the meeting can also provide input.

One cool thing about this whole deal is that Bachman Lake is actually semi-historic for Texas skateboarding, I’d say.
Yeah! In the late ’80s, Jeff Phillips and some of the top national skaters had a ramp there called the clown ramp that was used by local skaters. It was also a stopping place nationally for pro skaters from around the country. You can look on YouTube and see Tony Hawk and Steve Caballero skating the clown ramp at Bachman Lake. I’ve gotten the impression from skateboarders who skated at Bachman back then that this is an important and symbolic coincidence that the first modern skatepark is going back to where the origins of Dallas skateboarding began. Team Pain has some preliminary ideas about incorporating some of the clown ramp’s color patterns into the park. There may even be some artistic tributes to Jeff Phillips and other skateboarding greats that set the tone for Dallas skateboarding greats for decades to come.

That’s super cool!
Also, with all the bond projects, there is a percentage of the money that goes to a design — like a separate artist piece as part of the project. We’ve reached out to try and work on that simultaneously as the park gets built, so we can work on that together. I think they will be separate entities, but we need to try and coordinate that so it can be ready for the grand opening.

What do you mean?
Any art that Team Pain puts up will be a part of the skatepark. But, at the same time, the new Aquatic Center will have art commissions attached to it, too. We want to open a dialogue with the artist commissioned to that project to potentially incorporate some of the skating history at Bachman Lake to lend some history to their piece as well.

So, what does a $4 million skatepark look like? Will it compete with some of the surrounding parks?
Yeah, I think it will be really competitive with the other parks in the metroplex. It will be as big or bigger than Frisco’s, which is one of the larger parks in the metroplex. Out of the $4 million, they have to allocate funds for unforeseen engineering needs, and other things that go along with the process. When it comes down to it, I think we have at least $2.6 million for the skatepark itself, and there are reserved funds that could be added to that as well if not for unforeseen difficulties. So: At least $2.6 million maybe more, and it will be the size of Frisco or bigger.

And it should be skate-ready shortly after that?
Right.