Mike Crum Doesn’t Care That He’s Not In A Video Game. 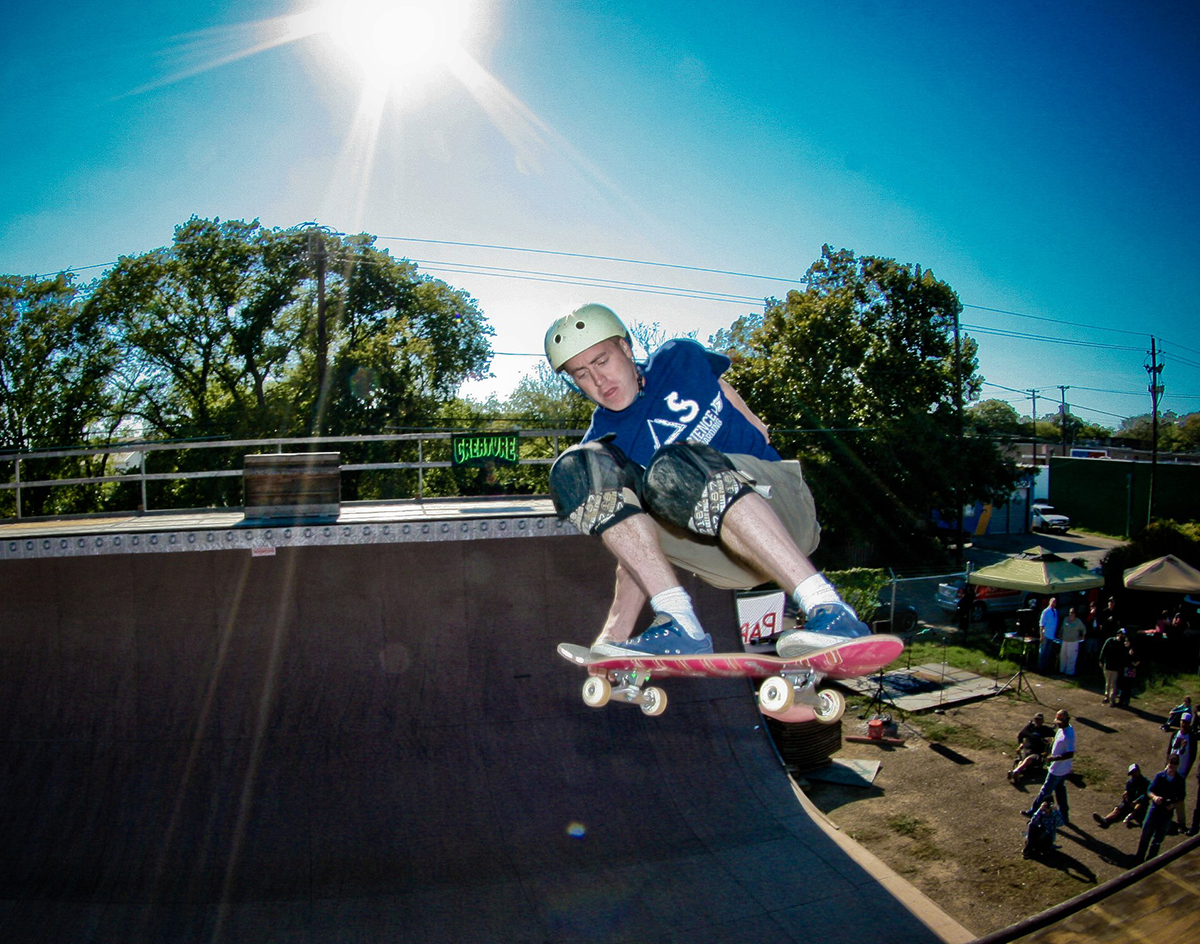 Wouldn’t It Be Fun To Play Tony Hawk’s Pro Skater As Legendary Dallasite Mike Crum? Sure, But He’s Plenty Busy Building His Nonprofit 4DWN Community As Is.

All photos courtesy of Mike Crum.

One of the world’s all-time greatest skateboarders calls Dallas home.

An X-Games medalist, Mike Crum was even there in 1999 when Tony Hawk historically landed the first-ever 900. In fact, right after Hawk successfully landed, he was one of forerunners in the crowd that swept Hawks up in dogpile of congratulations.

It was a night Crum still describes as a magical moment in skateboarding. Hawk, for his part, remembers it as the best day of his life.

So: How did Tony Hawk repay Dallas’ golden-boy pro for that kind of support? By indignantly sidelining him in every “Tony Hawk’s Pro Skater” game ever — including, of course, the critically acclaimed best-selling new remake.

SEE ALSO: SPEEDEALER FRONTMAN ON TONY HAWK’S PRO SKATER REISSUE. // Speedealer’s Music Is Back In The Spotlight Thanks To The Skateboarding Video Game’s Re-Release Alongside Its Original Soundtrack. But Is Anyone Listening?

But who doesn’t wish they could play “Tony Hawk’s Pro Skater” as Dallas’ own philanthropic ex-pro?

Crum’s professional career began 16 years old when he went pro with a sponsorship from the iconic Vision Skateboards brand. From there, he travelled the world and made a living off skateboarding for several years. Even as very skating flatlined in the early ‘90s, he was able to transition to skating street until vert reemerged in prominence with the birth of the X-Games.

With that resurgence, Crum became one of the original X-Games heavyweights, and a four-time vert doubles medalist with partner Rune Glifberg — who, by the way, can be used by players of “Tony Hawk’s Pro Skater”.

Crum, for his part, doesn’t sweat the lack of recognition Dallas receives in the video game skateboarding world. Instead, when the 46-year-old looks back at his career of skating, he chooses to look fondly upon his roots in the sport.

He remembers first picking up the board after Back to the Future came out in 1985, right as skateboarding was witnessing a new peak. Crum says Marty McFly’s skating scene birthed a whole new generation of skateboarders just like him — similar to the affect that a certain late ‘90s video game had, really. Around the same time, he remembers his mother taking him to buy his brother a skateboard from Skate Time at Bachman Lake, which was then home to the infamous Texas Clown Ramp — and how quickly he became entranced with what he saw.

“I was 11, and it was Friday night,” Crum recalls. “The lights were on and everyone was skating vert.”

“I was watching them like, ‘What the hell is going on?!’” Crum says. “They blew me away, and I begged my mom to get me a board too.”

She acquiesced, and his parents then further supported his young passion by having an architect friend build a small vert ramp in their backyard. Before long, a young Crum was ripping through the Crown Ramp alongside his heroes.

“I was doing airs and inverts and I was only, like, 12 years old,” he says. “Back then, there weren’t a lot of kids that could do that stuff, so I got [signed to] Zorlac, which is the best company ever from Texas.” 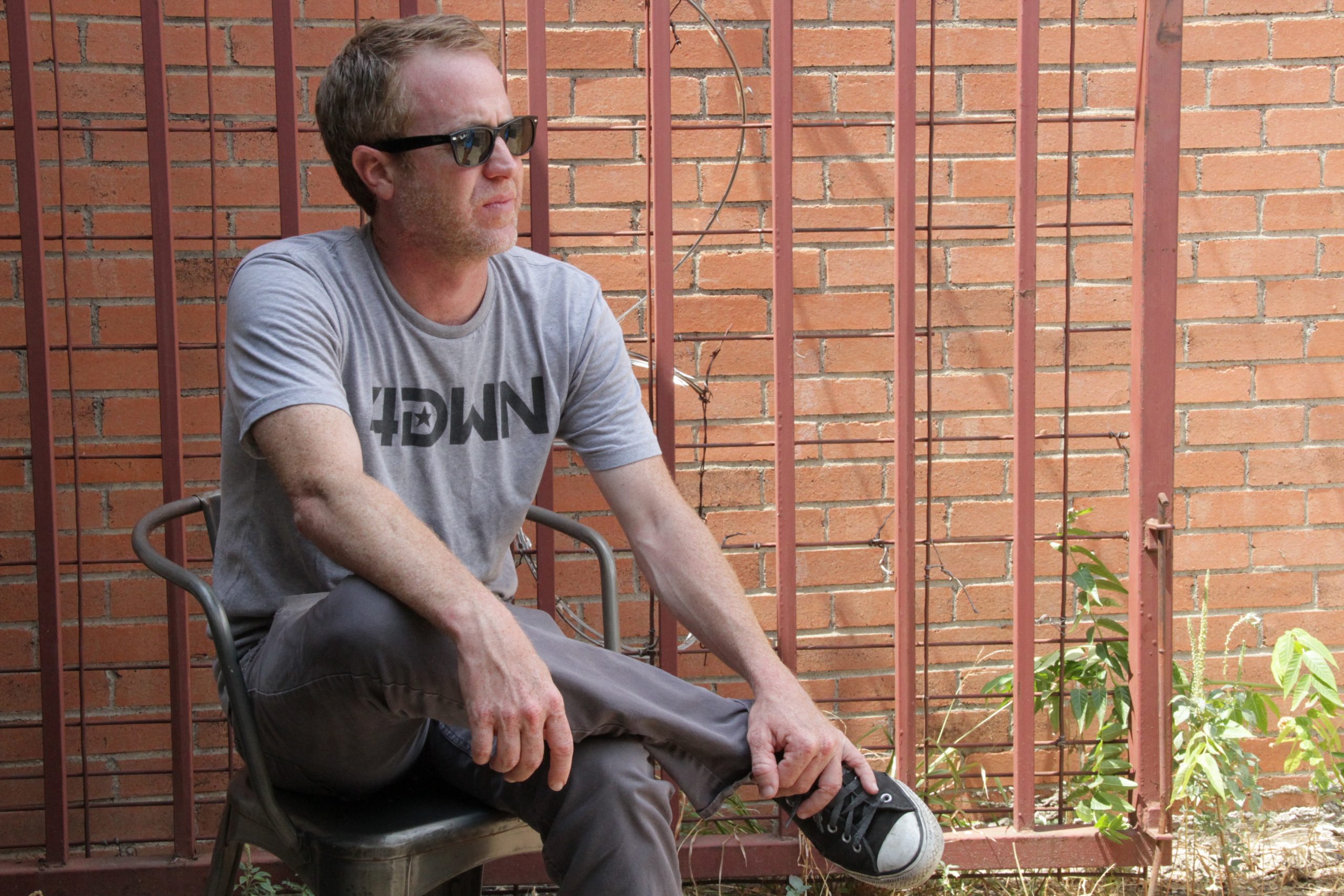 Now retired from the professional circuit, Crum spends his days dealing with the usual suspects at his 4DWN skatepark in the heart of South Dallas, which was originally developed out of an older skatepark concept. Back then, Crum was charging kids $5 a day to skate and kids were showing up and pulling change from their socks. Realizing Dallas proper boasted no free skatepark beyond spartan Saint Frances, he turned 4DWN into youth-focused nonprofit with a mission of allowing kids to skate for free.

But once the still-ongoing coronavirus pandemic first hit, Crum and his business partner Rob Cahill found their priorities shifting dramatically to the much-needed satiation of a hunger-ravaged community. Now, 4DWN’s mission statement has evolved to beyond kids athletics. It now encompasses a goal of fostering growth and opportunity for the whole community.

“We partnered up with some really great organizations,” Crum says. “When Restorative Farms lost their spot and needed a place to build grow boxes for South Dallas residents, we donated our space and Restorative Farms built around 400 of them here.”

Beyond its partnership with Restorative Farms, which offers self-sustaining vegetable grow boxes and education to underserved communities, 4DWN has also teamed up with the Oak Cliff Veggie Project and Drew Delmer of Big Tex Urban Farms to develop a new Dickie’s-sponsored vert ramp that features a vertical garden utilizing stacked hydroponic farming methods along the underside of the two-story structure.

“Basically, we are enclosing the ramp where you can see through, and it will be done with LED lights called hydroponic towers that grow microgreens,” Crum says. “They can do seedlings and we can have a huge outdoor grow area.”

4DWN has also opened its doors to Harvest Project, a nonprofit food rescue initiative led by Danae Gutierrez, a DREAMER inspired by her young life in Mexico where she recalls being poor yet never hungry. In the U.S., it can be considered more challenging for some to access food regularly with a lower income, and Harvest Project has been working tirelessly to change that. Along with smaller pop-up deliveries, the organization hosts a large-scale free food distribution event at 4DWN on the last Saturday of every month, where volunteers can pick up food baskets for DISD families and housebound veterans. 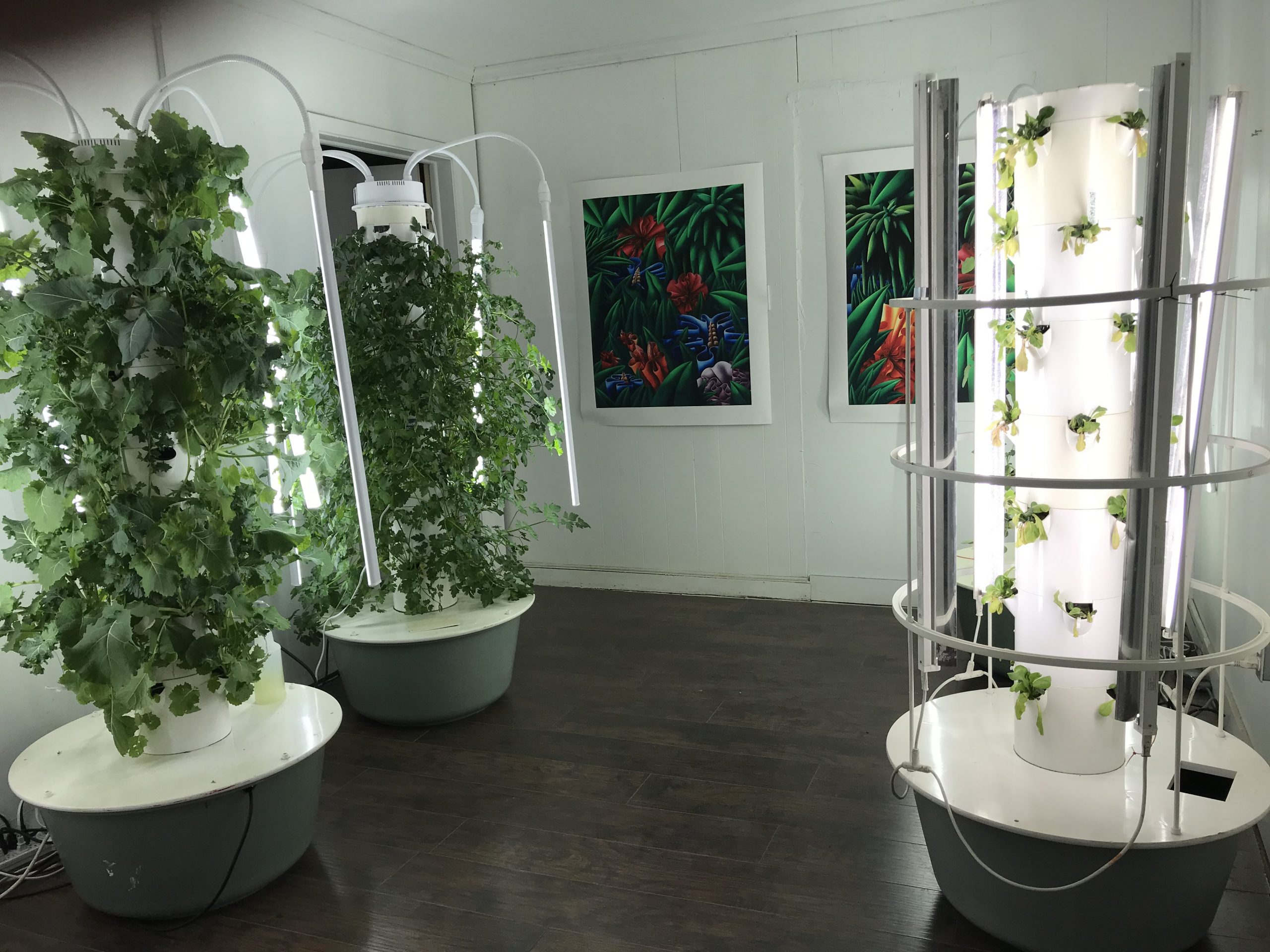 Some of 4DWNs hydroponic towers of micro-greens.

“They are constantly going,” Crum says of Harvest Project. “They feed thousands of people a week. It’s unbelievable — and all volunteer-based. We just do as much as we can to make their life easier.”

Harvest Project is also zero-waste nonprofit. Any food unfit to give away is composted. All boxes are recycled, so Cahill and Crum plan to build a small recycling area at 4DWN to help better manage their time.

“They were having to do the event, knock down the boxes, put them in a box truck and drive to the recycle place,” Crum says. “All [this] while they are still doing these distributions and working around the clock. So we [have made it] that they can just come here and recycle their stuff.”

4DWN also soon plans to add to its grounds a 40-foot storage refrigerator where each of these organizations can store food and further minimize waste.

“We are trying to be kind of a center point and outlet for these amazing organizations that really give back to the community,” Crum says. “They have access to our networks, our database, our volunteers and our sweat and hard work as well. It’s been a beautiful thing to see all these organizations work together.”

So, yeah, Crum has bigger fish to fry these days than harping about not being a playable character in Tony Hawk’s video game.

Pressed on the matter, he suggests that his would-be character’s go-to moves would be Crooked Grinds, Nollie Heelflip Indy Grabs and Hurricanes, among others. As for his special trick, Crum says it would decidedly be a Full Cab Flip.

As for his other stats?

He’d rather keep his focus on helping his South Dallas neighbors at 4DWN, though.

“It’s cool when people work together,” Crum says. “You get so much more done.”