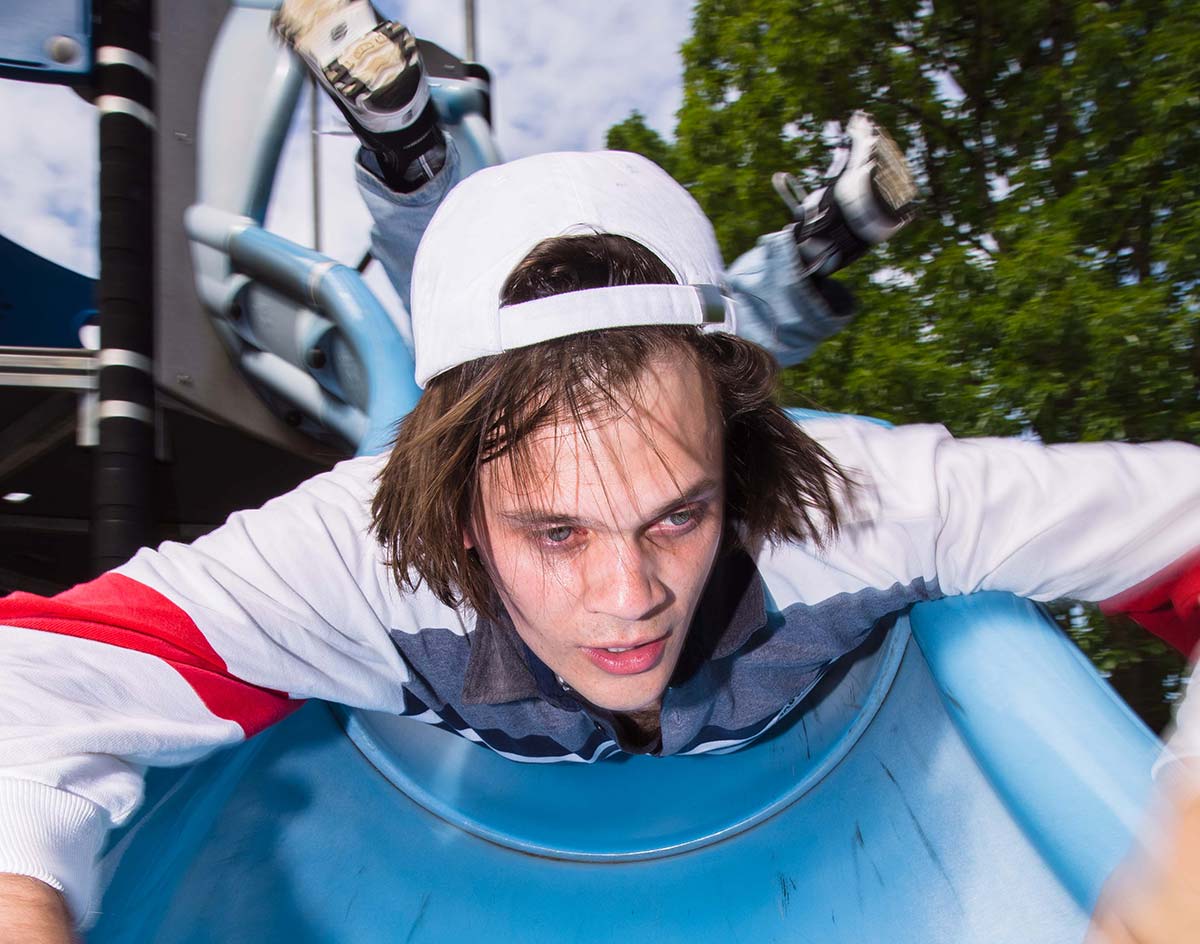 Before He Slides Though Texas For A Quick Tour, We Discuss Chillwave, Name Changes And The Difficulties Of Running A Label With The Electronic Musician.

You’d be hard-pressed to find someone with a work ethic as strong as George Clanton’s.

Between running his 100% Electronica record label with his significant other Lindsey French (aka Negative Gemini) and touring on a tireless basis, the New York electronic artist who made his name in the “vaporwave” scene manages to stay occupied at all times.

That’s why we were stoked to find out that Clanton was able to carve out some time to have a back-and-forth email exchange with us this week in advance of his quick tour through Texas this weekend. In support of August’s Slide, the three-city jaunt kicks off with a free performance at the Nasher Sculpture Center alongside Chulita Vinyl Club on Friday, November 16, as part of the museum’s recurring ’til Midnight at the Nasher events.

Over the course of our exchange with the Internet culture-indebted performer, we discuss the difficulties of running a record label, at least one effective to free oneself from the burdens of external expectations and the importance (or lack thereof) of performance monikers.

What unique challenges have you encountered in running your own label?
The label is definitely a challenge. I’ve been working all day on packaging and shipping orders. It’s midnight now, and I have to fly from LA to Boston at 4 a.m. to open for John Maus at a private event tomorrow night. Work-life-music balance is the most significant challenge in my life right now — but it’s good to be busy, and better than it was when I had nothing to do at all. I’m not sure [those challenges with it are] unique. A unique challenge that most people probably don’t realize is that I’m constantly bombarded by unsolicited demos — and it’s always from fans. So I’m in a unfortunate position where previous fans turn salty as a result of me not responding to their demos or requests to “review” their music. I didn’t see that coming when I started this, and it’s a difficult one to manage. The official position of the label is that we are not taking on new artists at this time.

Was taking on artists besides yourself and Negative Gemini something that was expected at the label’s earliest stages, or did that come later?
Absolutely. I [also] wanted to work with Surfing immediately from the get go, and take on others as we went along.

I was curious as to how the act of changing your alias from Mirror Kisses to George Clanton helped you venture into a new creative frontier.
It’s all in my head. It was a symbolic act that freed me from feeling that my music has to be all synthesizers, or ’80s influenced, or disingenuous to a degree. Now that it’s my name, it’s like I’m not playing a character anymore.

Even with the name change, do you ever feel shackled by your old material? Not to insinuate that your old material was a burden, but chillwave and vaporwave can be restrictive genres.
I don’t feel any pressure to appeal to expectation anymore. I was very surprised to hear people call my latest album chillwave. It doesn’t sound very chill to me! You’ve seen me play live; it’s not super chill. [Genre] labels don’t bother me at all, but I don’t let them direct me. If it sounds like chillwave, it’s just in my blood now!

I definitely hear some chillwave in your newer material, and I definitely heard it the time I saw you perform. Speaking of which, it turns out a couple people came to that show thinking you were George Clinton.
I’m sure they left disappointed!

I wanted to ask you about the lyrical content in your newest album, Slide. There seems to be a melancholic thread tying all of the songs together — ones that seem to come from real experiences. But Anthony Fantano said of the album’s lyrics, “The lyrics mostly feel like an emotional placeholder just to kind of fill space.” Were there particular experiences in your life that inspired lyrics to songs such as “Livin’ Loose” and “Monster”?
I think his criticism is fair in some places. “Livin’ Loose” isn’t a song that has a lot of meaning. I’m trying to use the words to evoke an emotion, in the same way I think My Bloody Valentine does. But it’s maybe harsh to call it “filling space.” The songs aren’t the same without the vocals. Others, like “Monster,” “Dumb” or “You Lost Me There,” are really strong lyrically and are more based on specific feelings I’ve had. But at the same time, I want to keep the lyrics vague enough for people to directly relate to. Ultimately, Fantano is just one man with an opinion. It’s not to his taste, and that’s fine. For me, I’m extremely proud of the lyrics on this album and how they give the album feeling. No regrets!

Cover photo of George Clanton by Brian Hamelman. George Clanton is playing the Til Midnight showcase at the Nasher Sculpture Center on Friday, November 16. Head here for more information.