[Q&A] Catching Up With Grubes, Who Likes His Gig. 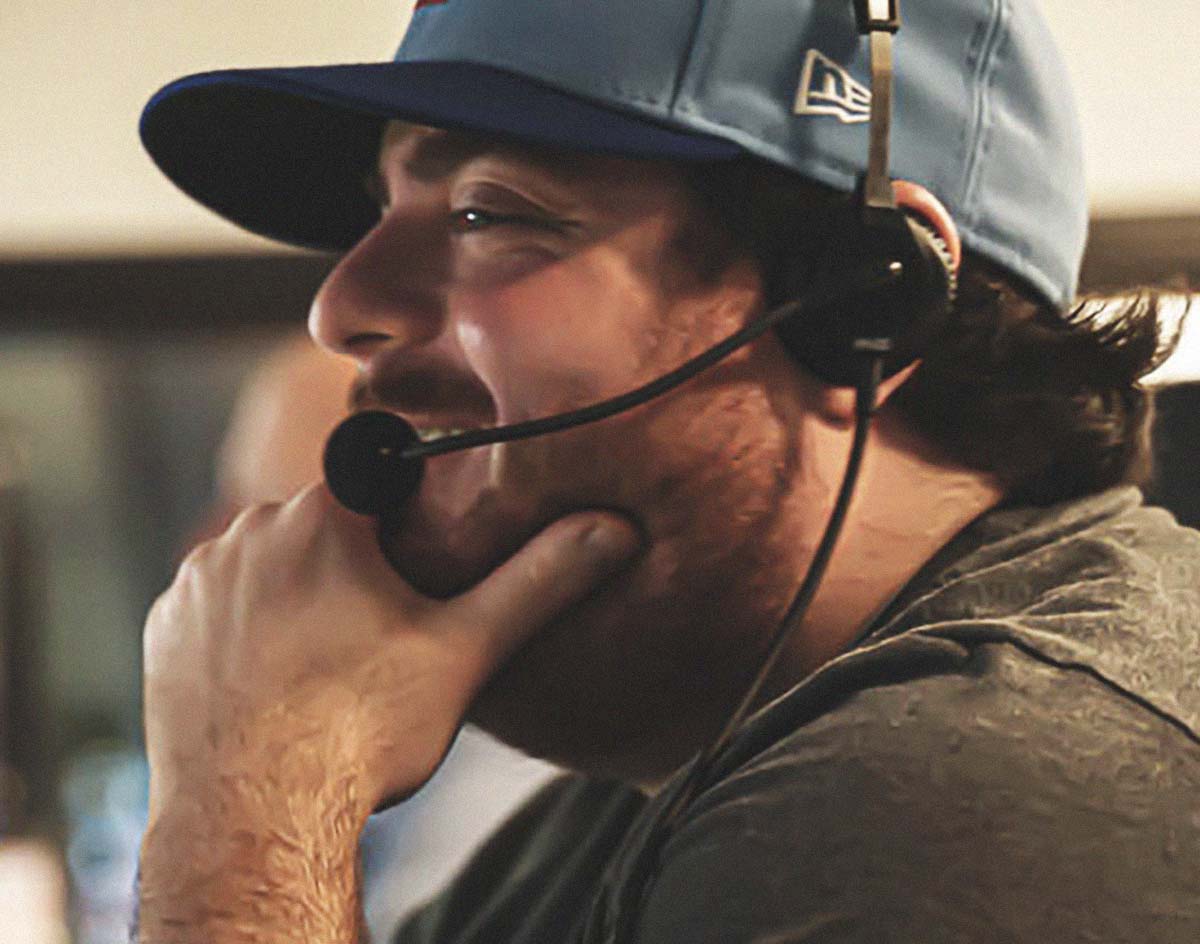 He Can’t Even Fix A Horse’s Bones, But If You Want Someone To Curate An Arena’s Sonic Identity, Texas Rangers DJ Michael Gruber Is The Man For The Job.

A lot of people know and love what Michael Gruber does.

Known more so just as Grubes, the Texas Rangers ballpark DJ is both Twitter famous and a legend from his time working at the beloved Dallas sports talk radio station, 1310 AM/96.7 FM The Ticket.

Originally an intern for Texas Radio Hall of Fame member Norm Hitzges, Grubes worked his way into the board operator position on afternoon drivetime show “The Hardline” and stayed there for several years. Taking cues from his predecessors, his timing of playing drops (and various other funny bits) helped set the standard for what you hear on the station today.

After he left the station in hopes of finishing school, though, he found himself on a new career path, getting hired to work as the minor league baseball team the Frisco RoughRiders’ “Ambassador of Fun” and then as the in-arena DJ for the Dallas Stars — a role that perfectly suited the talents he’d honed at The Ticket.

Beyond just playing music during play stoppages, Grubes helped shaped the hockey team’s affable identity with goofy bits like devoting an entire period to Nickelback songs to playing “I Believe I Can Fly” after a player fell into his team’s bench. It made for an experience that was funny and special; even if the game was disastrous for the home side, you came away happy with the music choices.

These days, though, the lifelong baseball fan has a new role, working the sound system at the newly-opened Globe Life Field for Texas Rangers games. With home games now open to fans in the stands, thousands get to hear his audio wizardry in person.

That in mind, we figured it time to catch up with him and talk about the new gig — which, yes, he likes.

(Oh, and to prove this is not Dallas nepotism at its best, Grubes and I are not related. My family’s name was originally Gruber prior to Ellis Island. Far as we know, though, we aren’t cousins. And, for the time being, 23andme is a little out of our budget right now.)

You know how to balance Ticket in-jokes/bits with those in the know and those who aren’t. Do you want to do more of the same, or test the waters some (within reason) this season with the Rangers?
I think that whatever happens will evolve naturally. Chuck Morgan’s only requests of me when I took over were: continue to use the theme from The Natural for home runs and “Cotton Eyed Joe” for the seventh inning stretch, and to otherwise just make sure Rangers games continue to sound like Rangers games.

Over Chuck’s 38 years of playing music at games, the position evolved a ton, and I hope that the same happens with me. He was able to work in-jokes from time to time, and I figure to do the same. After CJ Wilson signed with the Angels, Chuck would play “Ants Marching” by Dave Matthews when he came back to Arlington, which was the Chris Chris The Sales Guy music played on [The Ticket’s morning show] the Musers.

I’ll definitely work in Ticket references when I can. The Musers recently played a bunch of Rangers songs from the mid-’80s, and I was able to get the mp3s from Sean Bass. I played a snippet of the “Roll On Rangers” song when a rally was happening. I’ve also got the “trumpet” part of “Mambo No. 5” ready to play in honor of Julie Dobbs’ Opening Day song, so hopefully that will have been played by the time this interview publishes!

As I get more comfortable, I’m sure the bits will evolve and I’ll maybe get more “out there” — but I don’t want to force it.

How valuable was your experience in being the “Ambassador of Fun” with the RoughRiders as far as what you’re doing with the Rangers?
I loved my time with the RoughRiders! I still can’t believe Chuck Greenberg made six bobbleheads of me — plus a life-sized version! He’s a baseball marketing genius.

As the Ambassador of Fun, I got to visit with lots of fans and see baseball from another perspective. I also got a more in-depth experience of how the “show” of a baseball game is run. Then getting to DJ for the Riders during the 2019 season really helped me step up my knowledge of working a baseball game before I trained with Chuck Morgan near the end of that season. I got to be the second-to-last person to play music at Globe Life Park!

Honestly, I never really paid much attention before to what was played on the PA at a Rangers game save for a few seconds of walk-up music and the theme from The Natural. Do you want to give people an experience unlike any other ballpark in the country?
I think that’s the hope for any sports game presentation team, and especially the DJ, because they have the most opportunities to really shape the “personality” of the ballpark or arena. Before the Rangers, I was the Stars’ DJ for seven seasons, and I filled in for the Mavericks pretty regularly after my only season with them. Some songs will overlap, but I believe that each team has always had a truly unique feel to their presentation since each team arrived in town. Poizon Ivy with the Mavs and Jonathon “Shippy” Shipman with the Stars continue that today, and my buddy DJ EJ with the Cowboys does it as well. DFW is in a really good place with sports DJs, in my humble opinion!

Would it be too meta if you played a drop with you on it during a game? I’m thinking “We can’t even fix a horse’s bones?”, “Am I wrong, guys?” and “Exactly.”
[Laughs.] Drops don’t really fit with Rangers games in my experience, but maybe I can work in a note or two from my horrendous attempt at “Under the Bridge.” [Laughs].

Any chance we could hear some Sahara Rain, the hard rock band Danny Balis played in the 1980s and 1990s, through the speakers someday?
It’s always a possibility! In the meantime, I do make sure Danny’s awesome band the Bastards of Soul is well-represented. He’s still my leader after all!

How much preparation do you do for music prior to a game, and how much is improvised on the spot?
I get a script a couple hours before the game that details any promotions or games we might be doing between innings, which I usually need specific tracks for. But, otherwise I pretty much improvise. During games, I usually work ahead by only a half-inning or so. I tend to work best when I’m in the moment, so I like the flexibility of not totally having a dedicated plan. There are just too many swings — pun mostly intended — in a game to plan too much ahead of time. Plus, I’m lazy.

Do you still welcome suggestions from people about music?
Of course! My job is to enhance the fan’s experience, so I always work in suggestions as best as I can! I’ve been incredibly lucky throughout my time at The Ticket, the Stars and now the Rangers to have awesome communication with P1s and fans. They are the reason I’ve gotten to do all this fun stuff. They’re always welcome to email me at [email protected] or just tweet me at @tweetgrubes.

Would you ever consider a full inning devoted to another highly-derided artist? As someone who was in the AAC when you pulled the Nickelback period during a Stars game, I know some people got the joke while others some seated near us clearly did not get it.
Unfortunately, I doubt it — just because baseball isn’t really set up for something like that. Hockey is pretty perfect for it because there are so many stoppages in a relatively short amount of time. But who knows? I’ve learned it’s pretty silly to say things will never happen. There’s always a chance!

So all tweets and texts can stop because of this Q&A, where can people find you for a selfie or hug?
The best time is between doors opening and about 45 minutes before the game — so between 5 and 6:15 for a 7 p.m. start. My set-up is in the press box on the fourth level between sections 311-313. Tweet me at @tweetgrubes and I’ll do my best to get out there as quickly as possible!