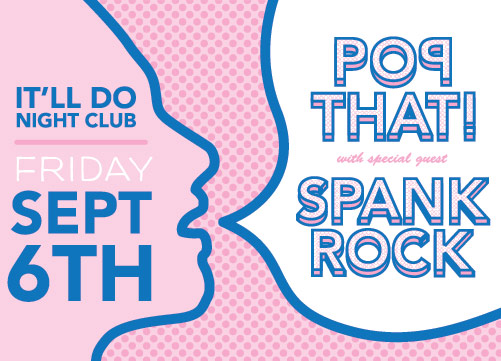 Introducing Pop That, A New Monthly Throwdown at the It'll Do. Our First Guest? Spank Rock.

OK, so this is really exciting: For the past couple of months, we've been quietly working behind the scenes with DJ Sober and the It'll Do Club on a super top-secret project aimed at giving Friday nights in Dallas a much-needed pick-me-up in the wake of Thursdays' recent dominance. If nothing else, we figured we could give at least one Friday night a month some help. But, more than that, we wanted to do something great.

And we're now ready to announce what we've been scheming up: On the first Friday of every month and starting on this coming September 6, we're taking over the It'll Do Club for an epic, no-holds-barred throwdown of most-likely-sloppy proportions. Sober's in the mix every time, but so, too, will be an outside headliner — a name aimed at turning this party completely on its head.

It will be crazy. It will be baller. It might be too much fun, actually.

The party? It's called Pop That. And, first up, we're bringing Spank Rock in to turn things up and turn you out. The progressive Baltimore-based rapper born Naeem Juwan and known for his raunchy performances will let loose a full, live set at this bash, backed by his pal and ours, Shuttle. Brain Gang's Killa MC will host.

Tickets are $10. Drinks are cheap. The party will go late.

We're taking Fridays back, y'all. It's going to be huge.

Get your tickets here or in the embed below.