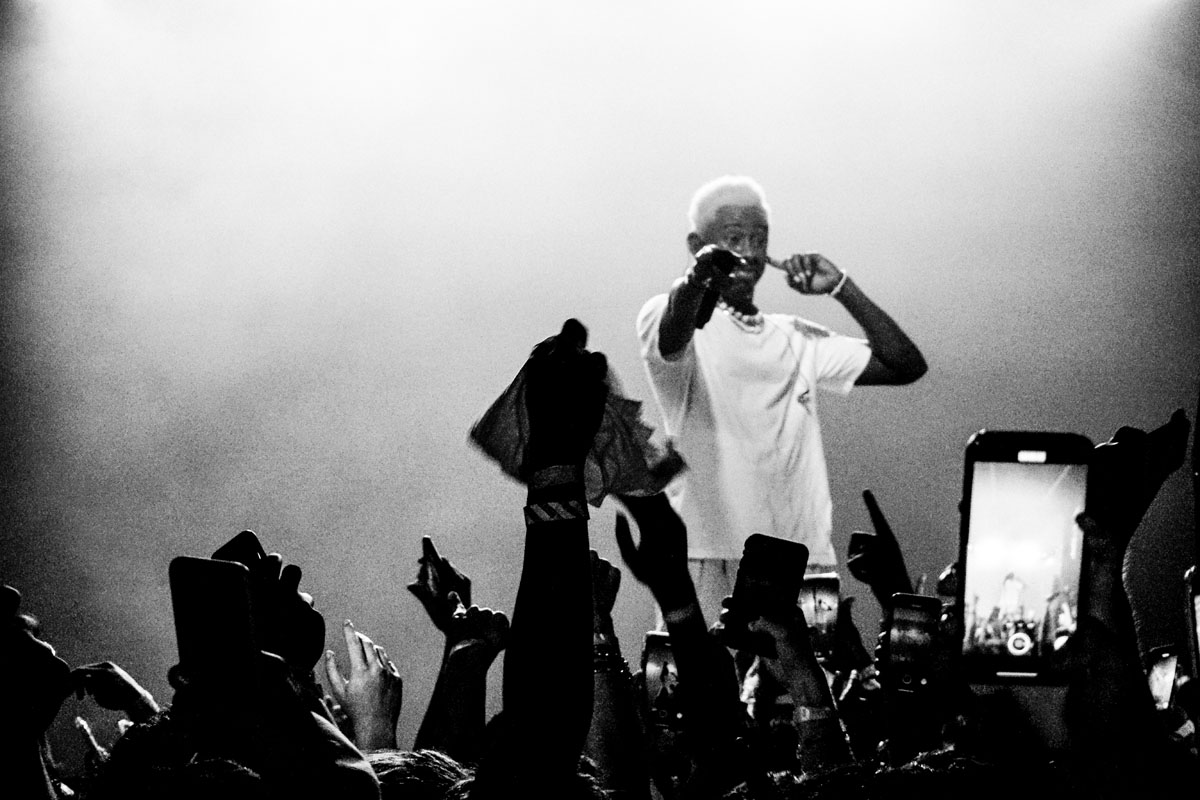 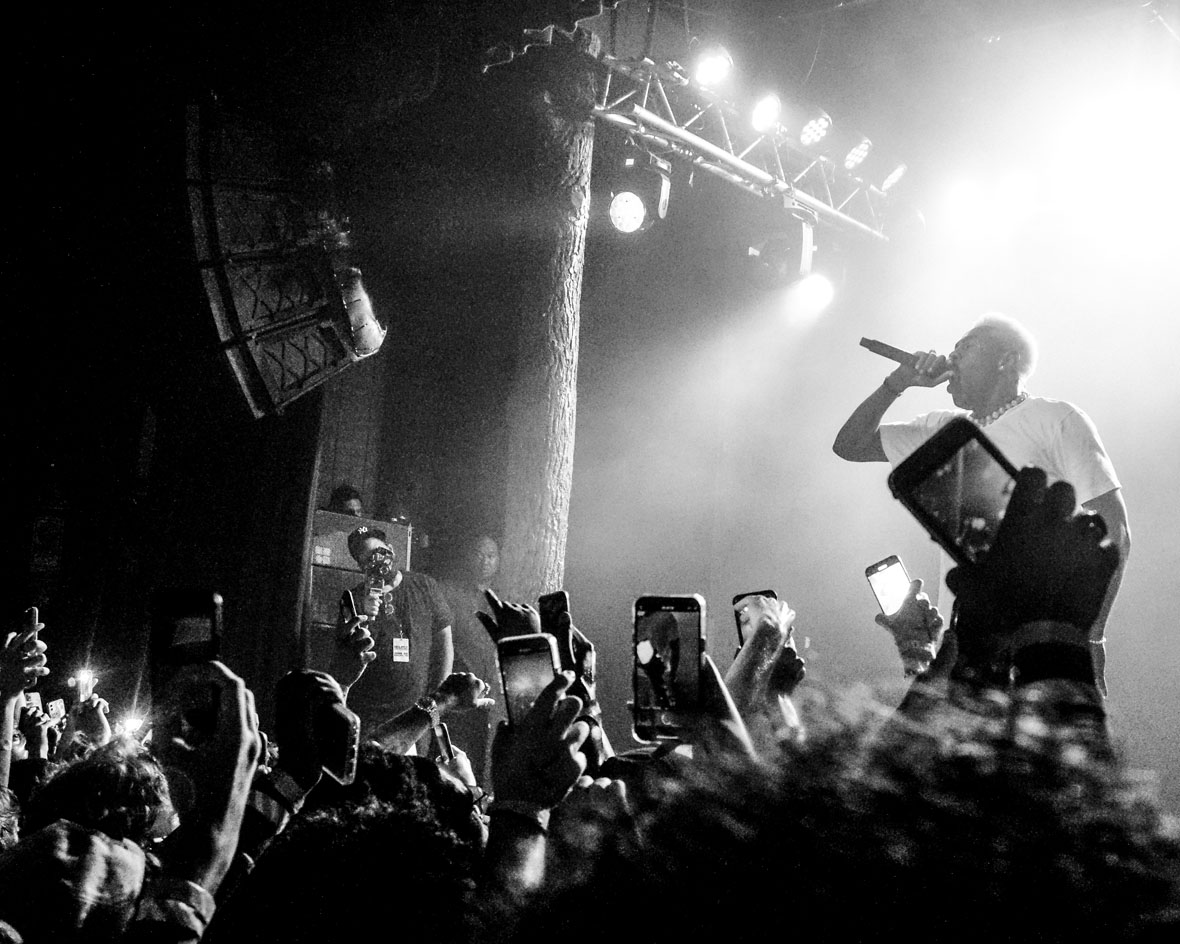 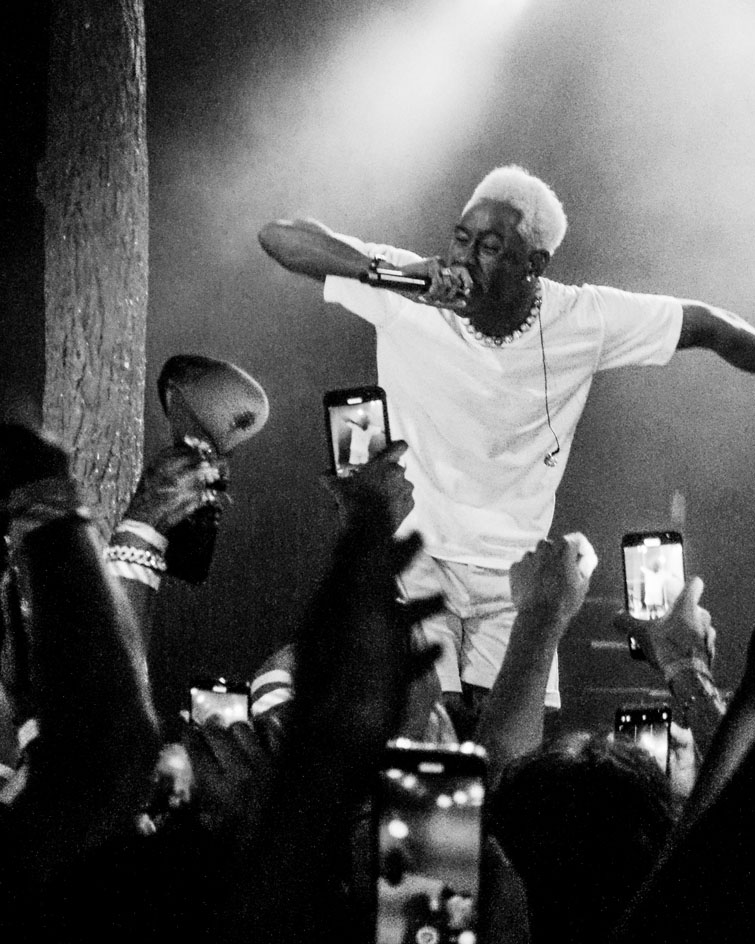 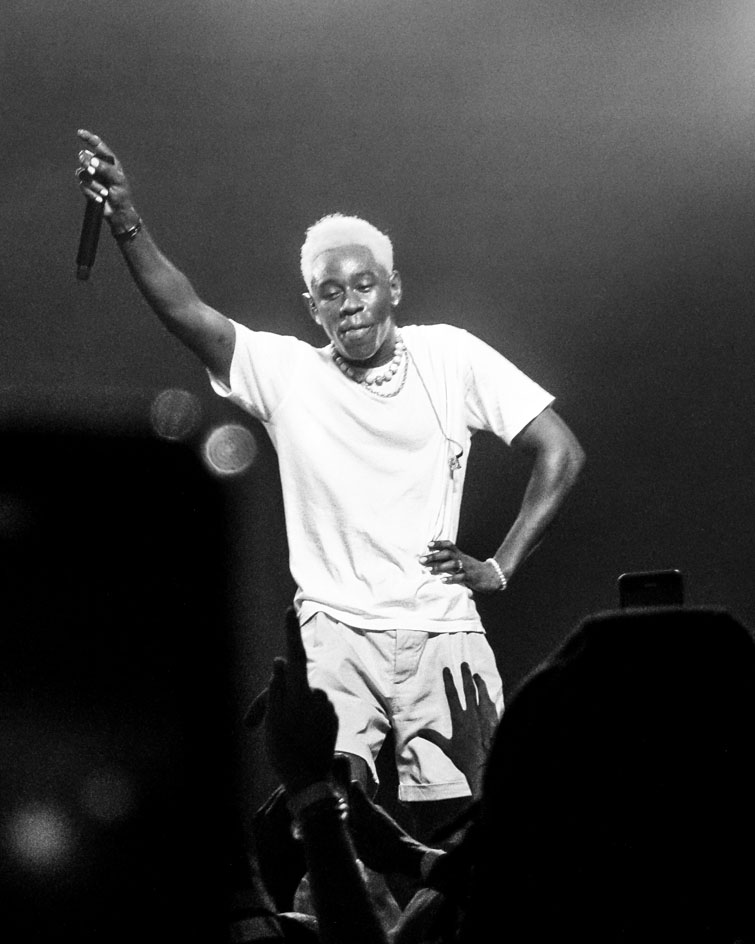 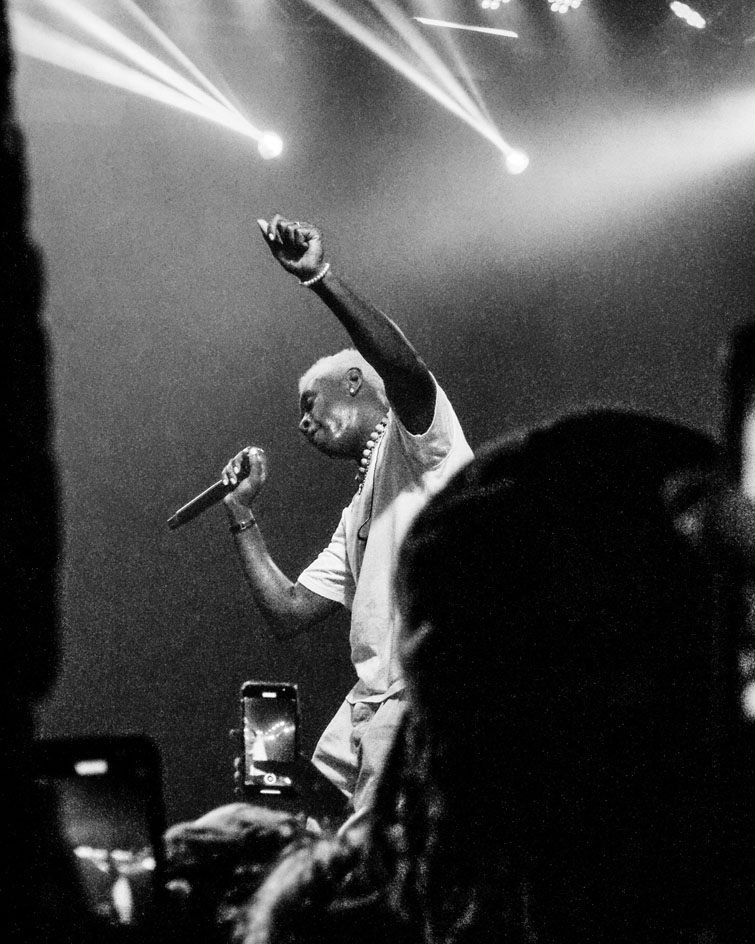 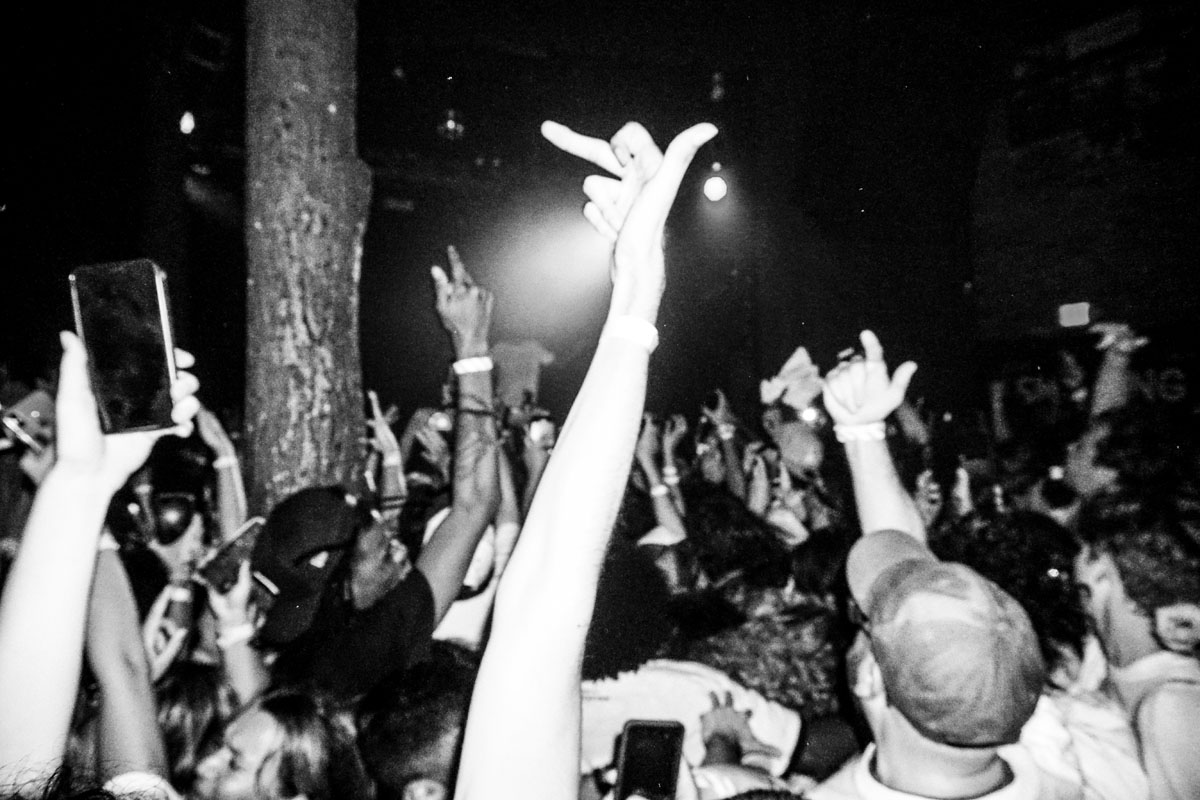 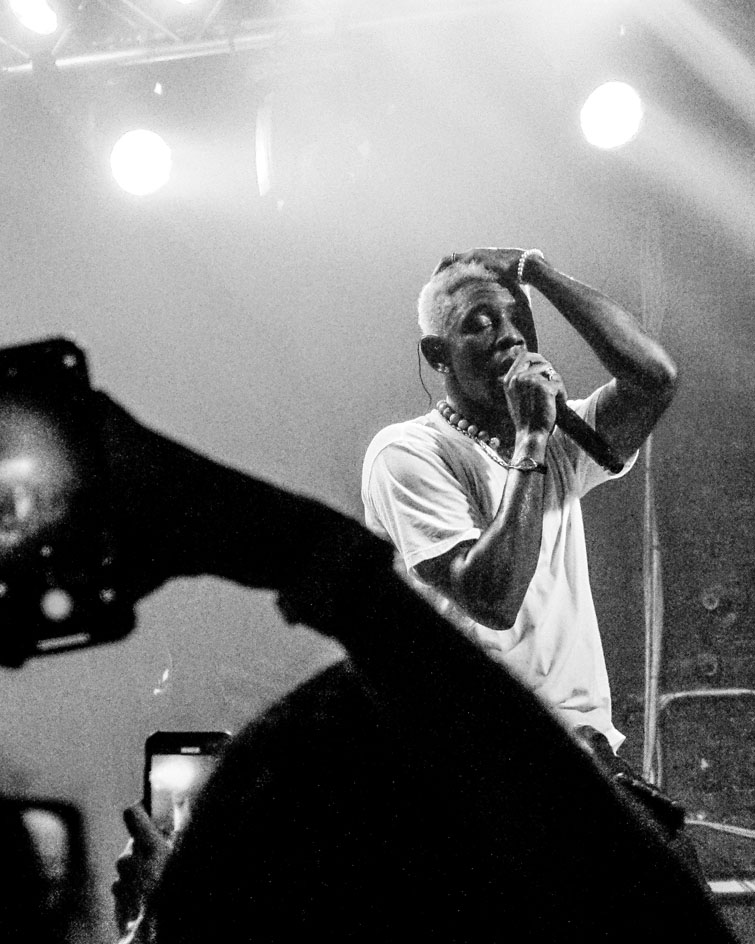 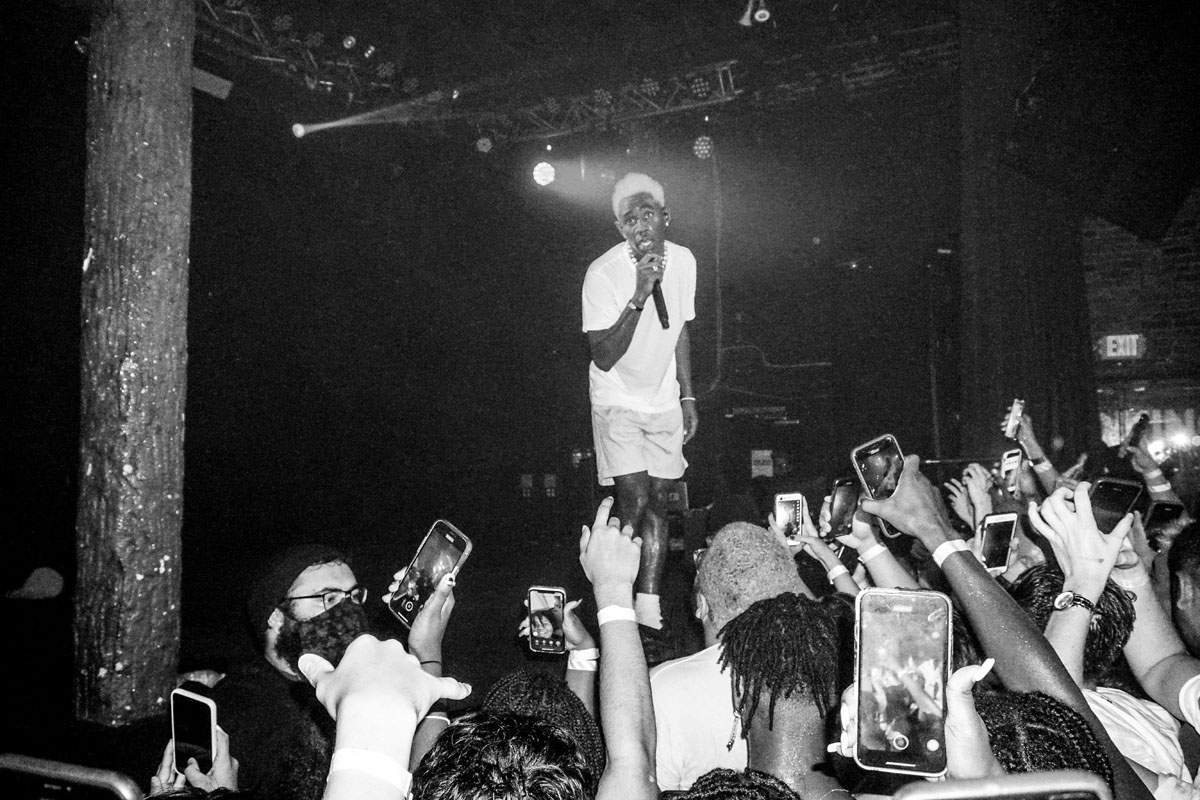 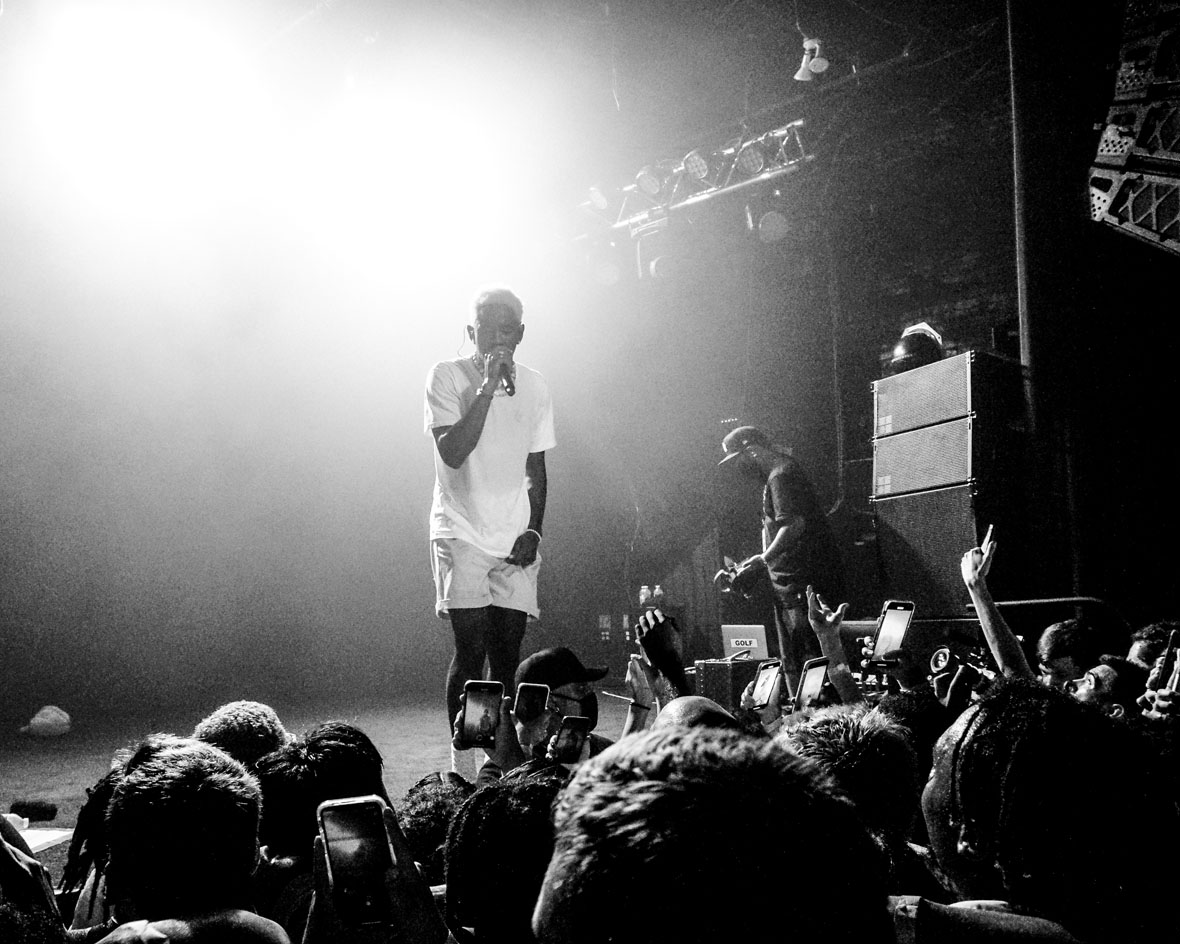 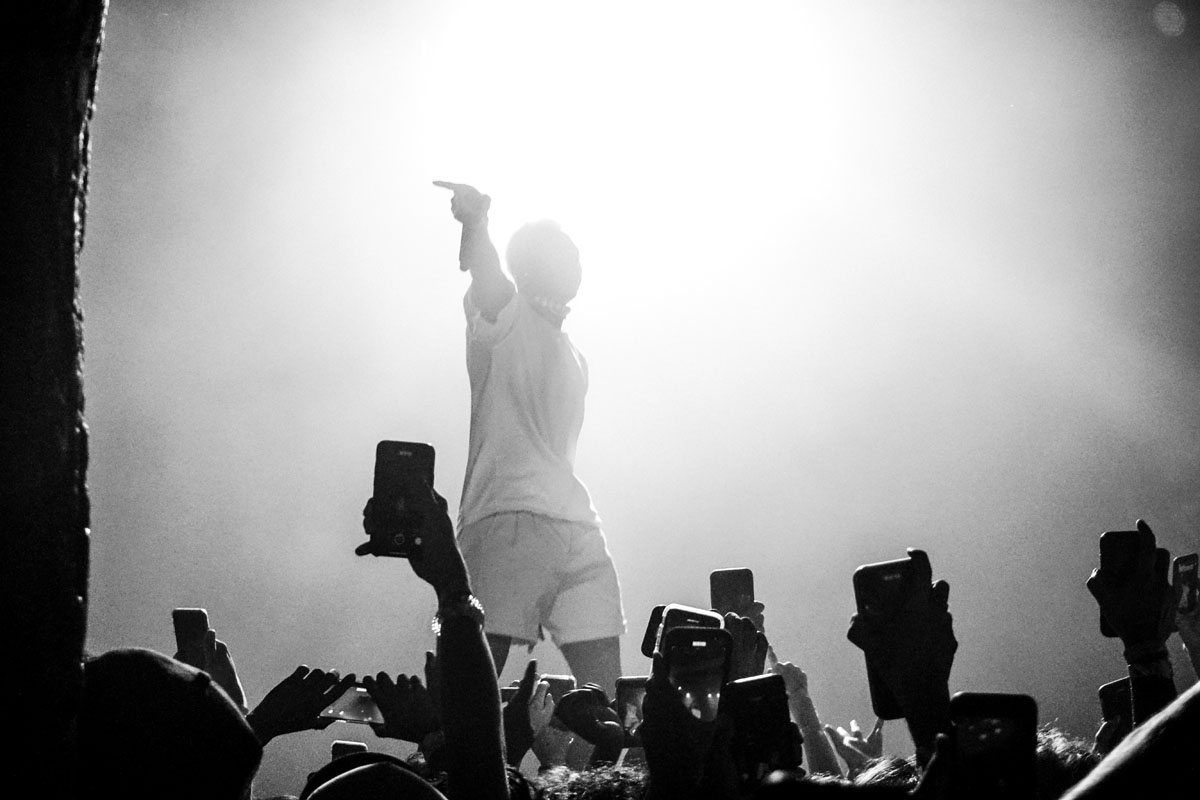 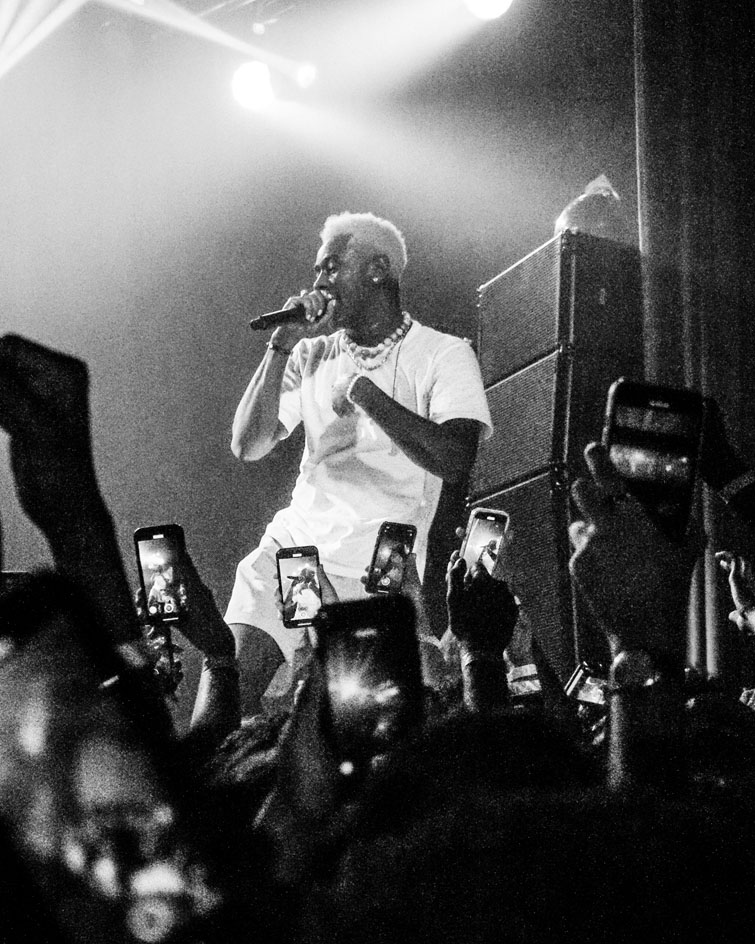 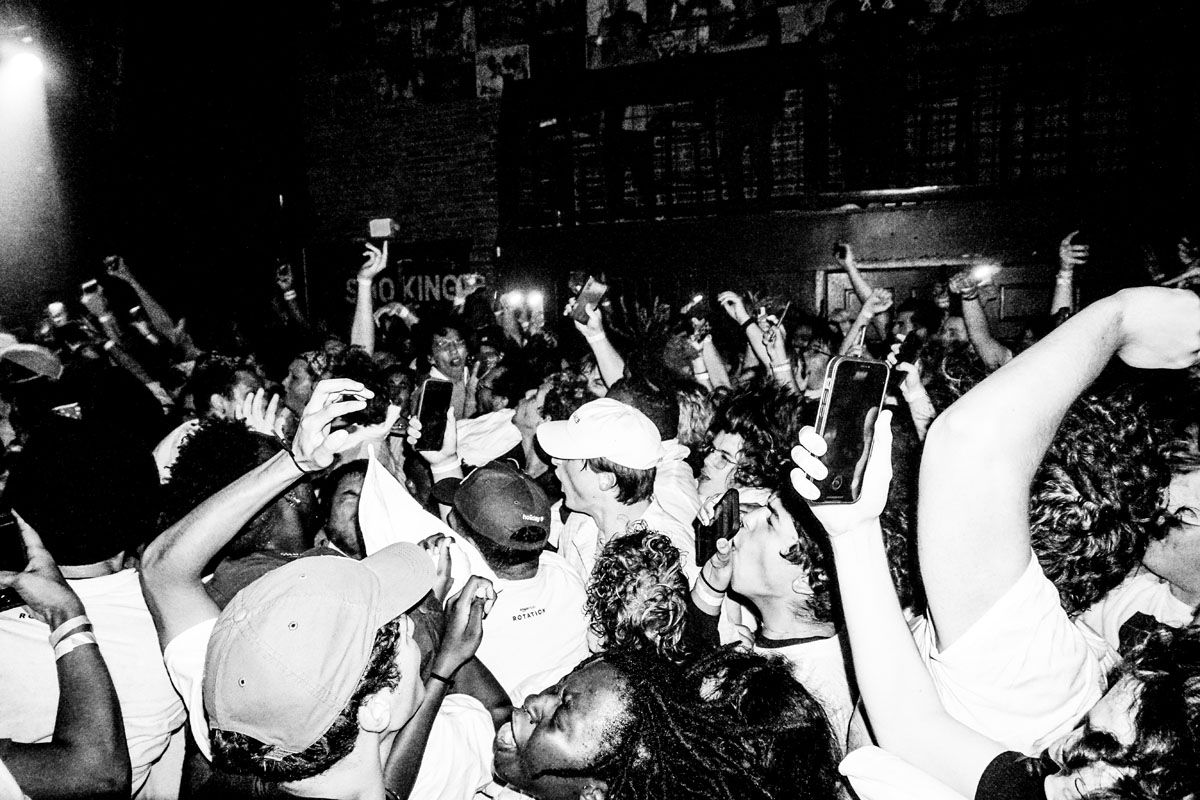 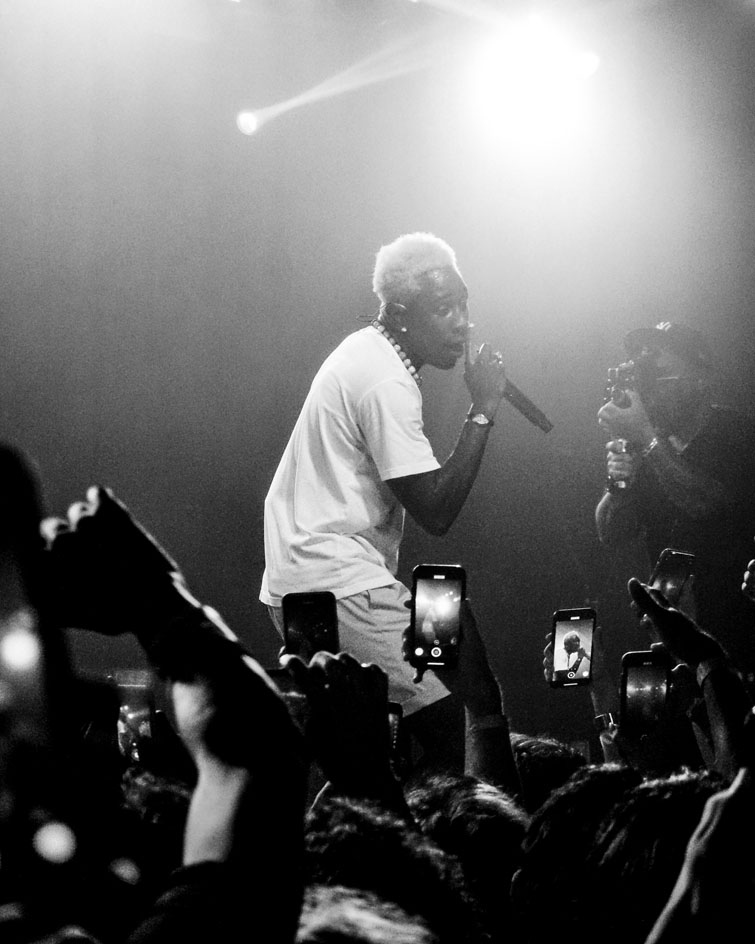 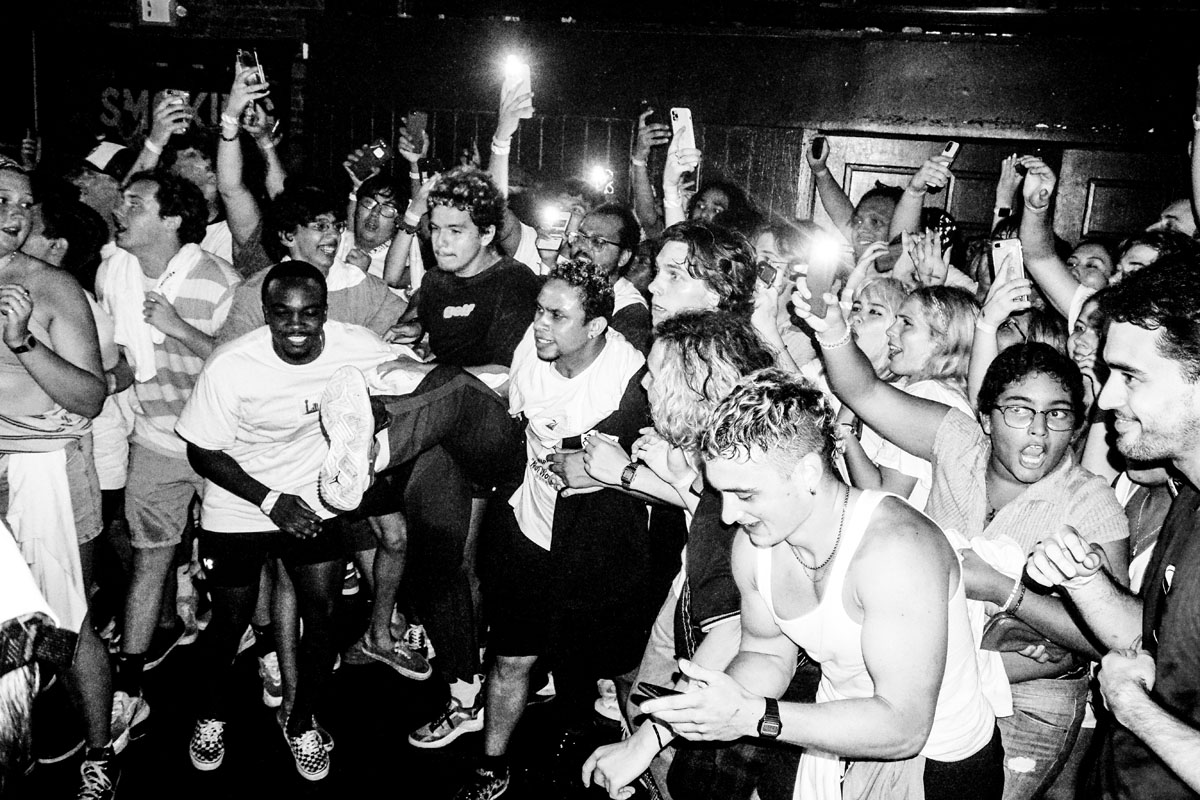 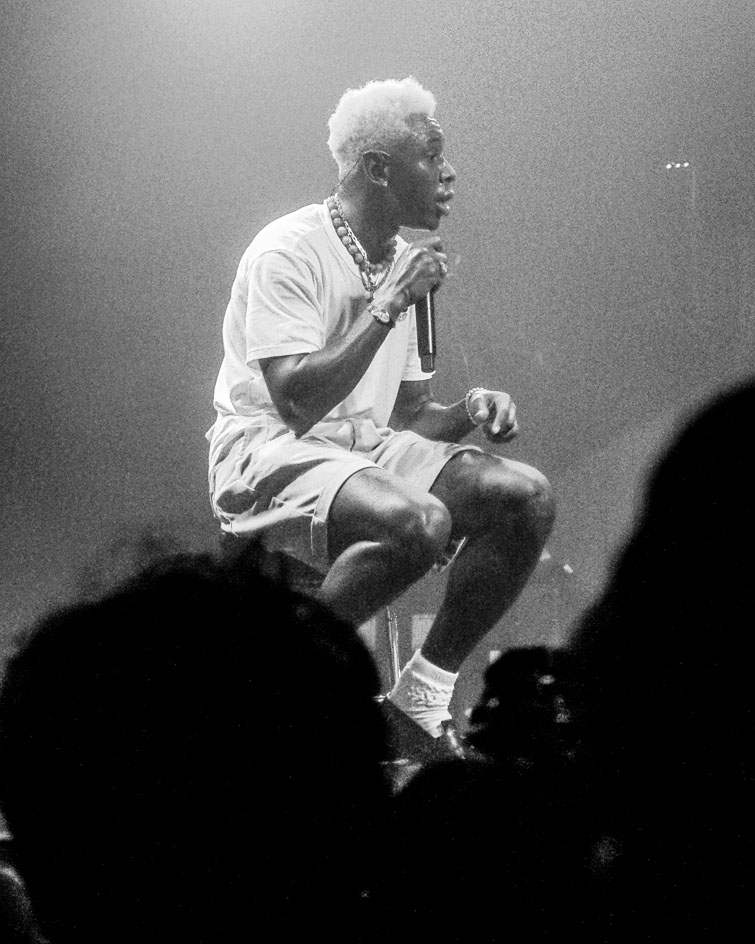 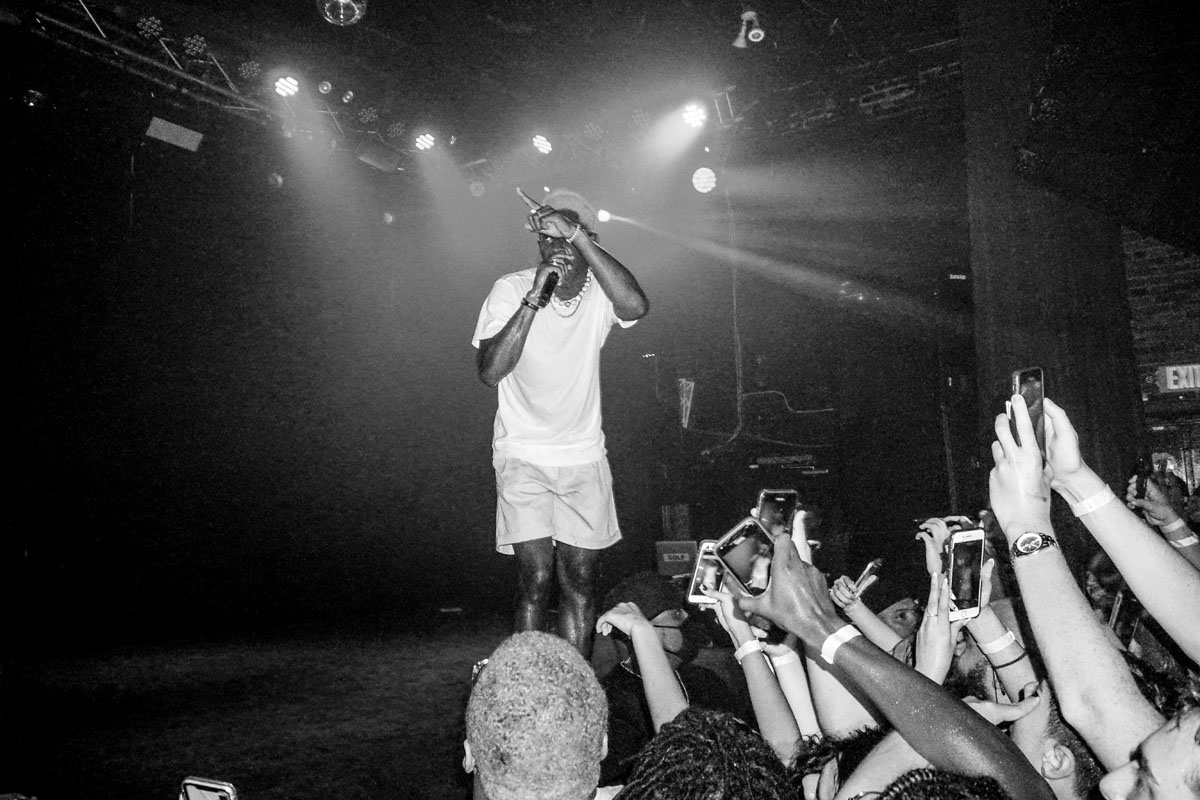 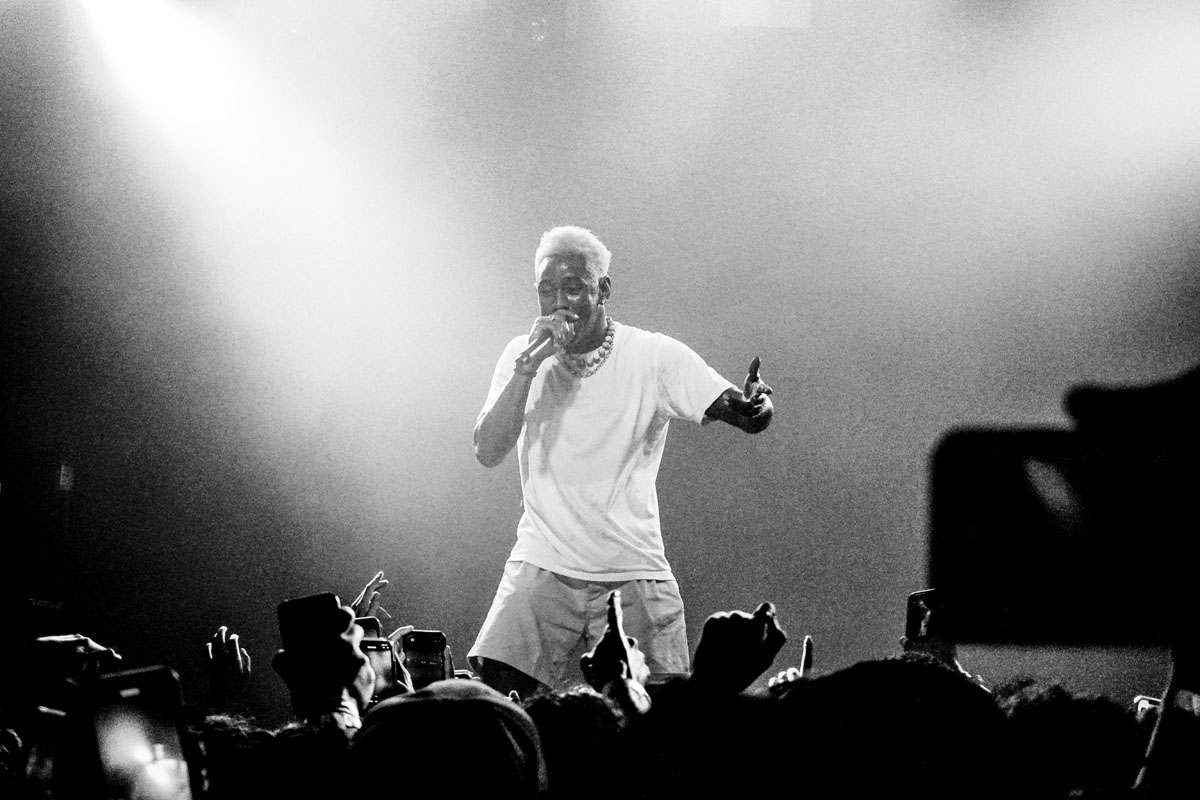 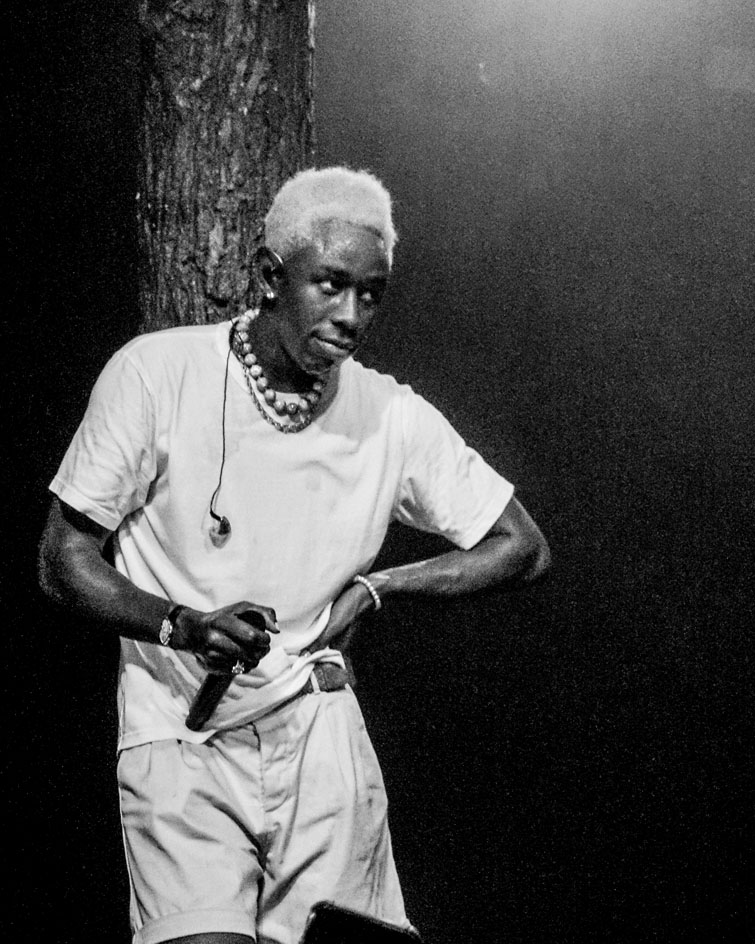 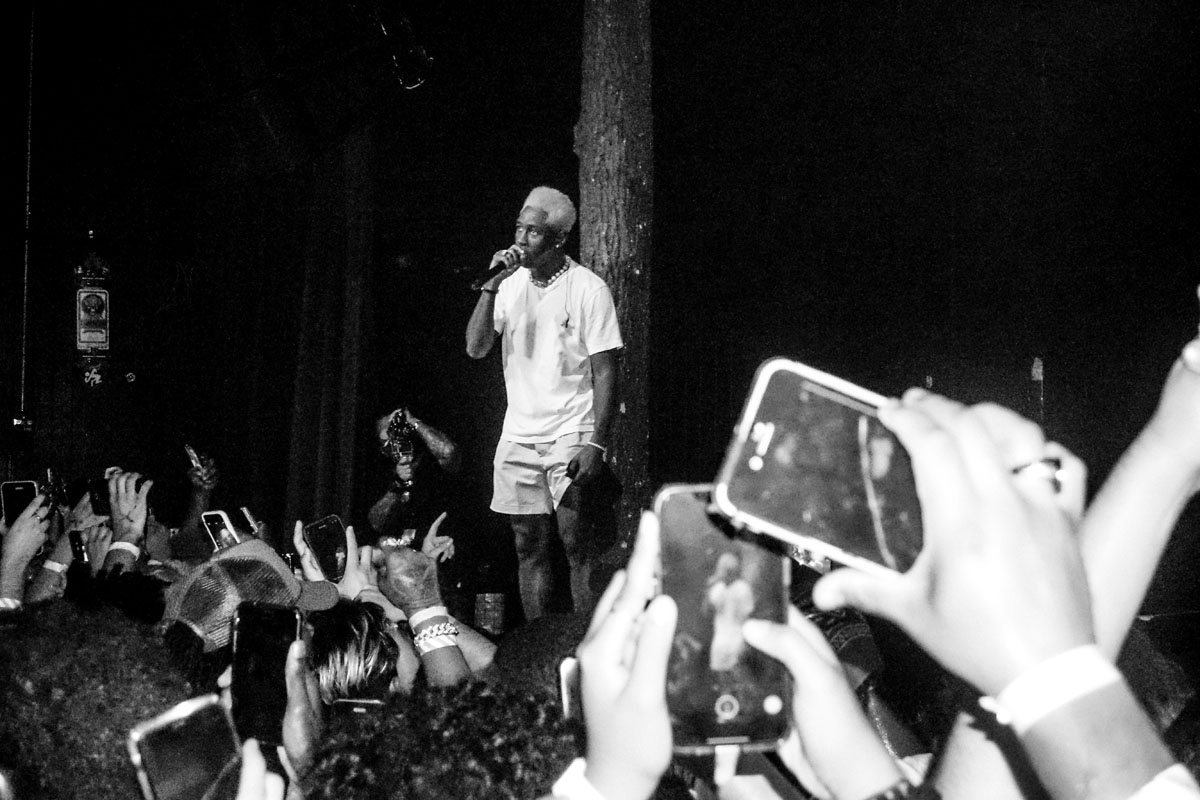 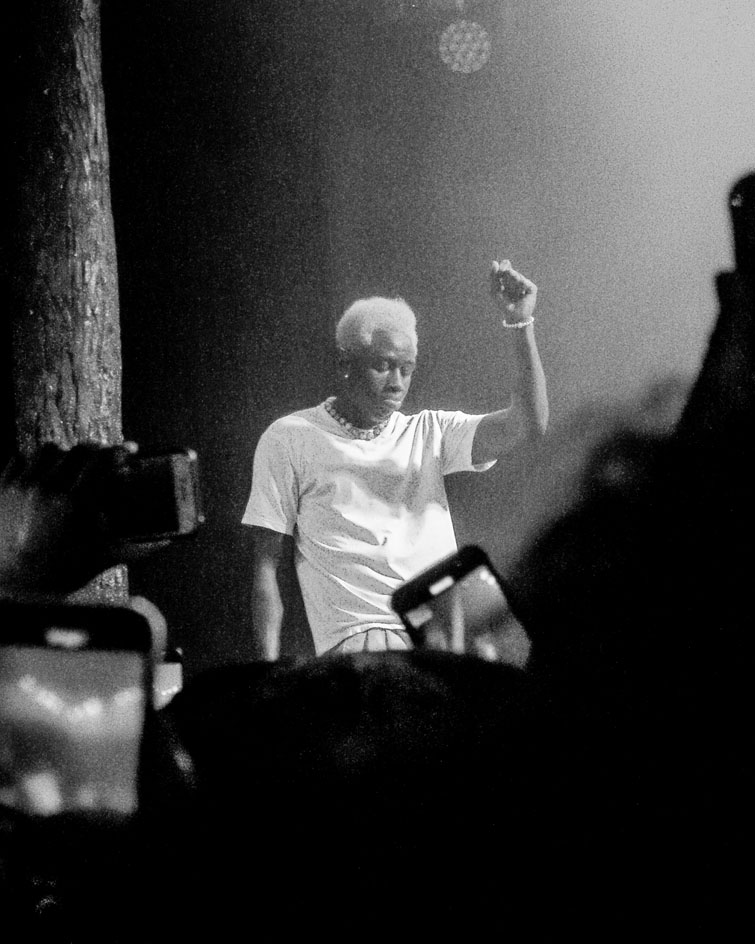 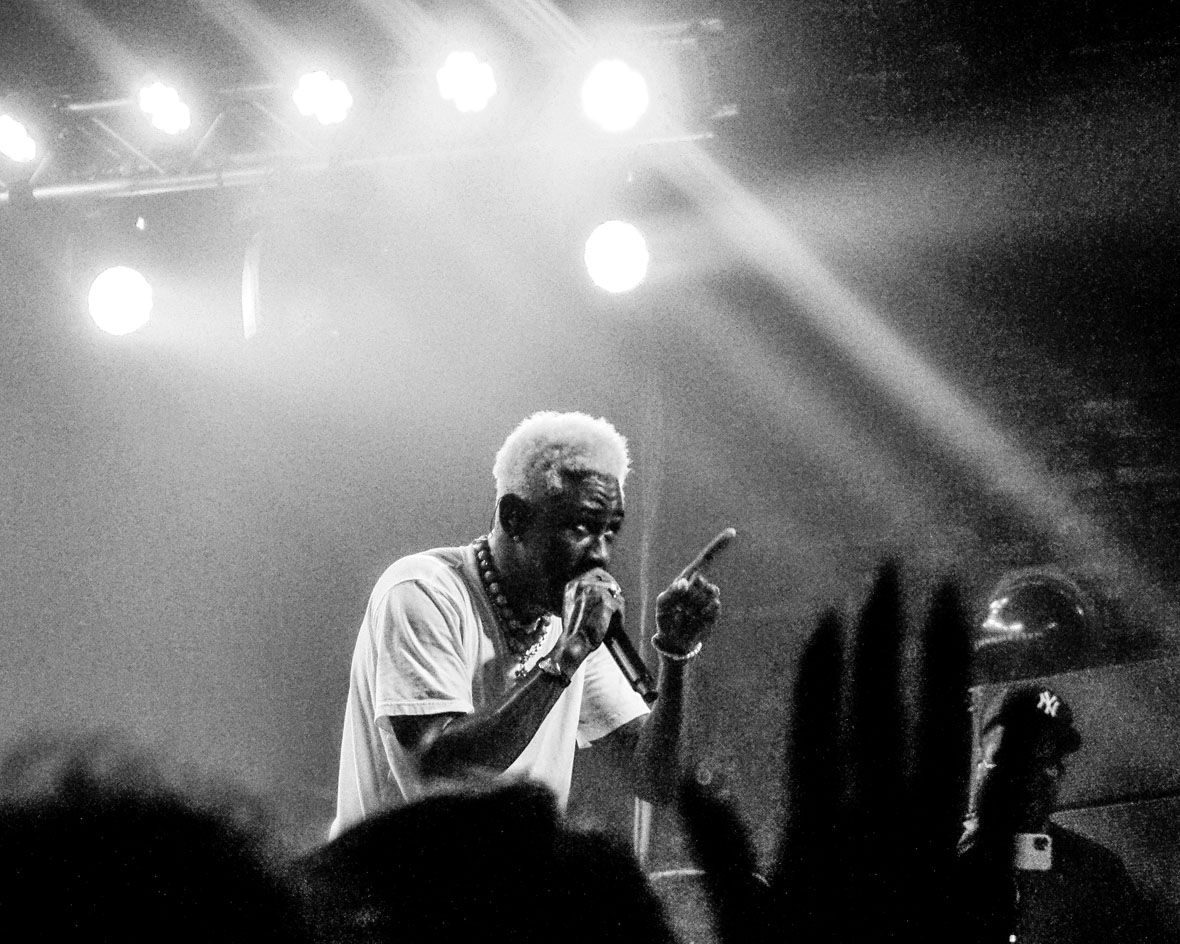 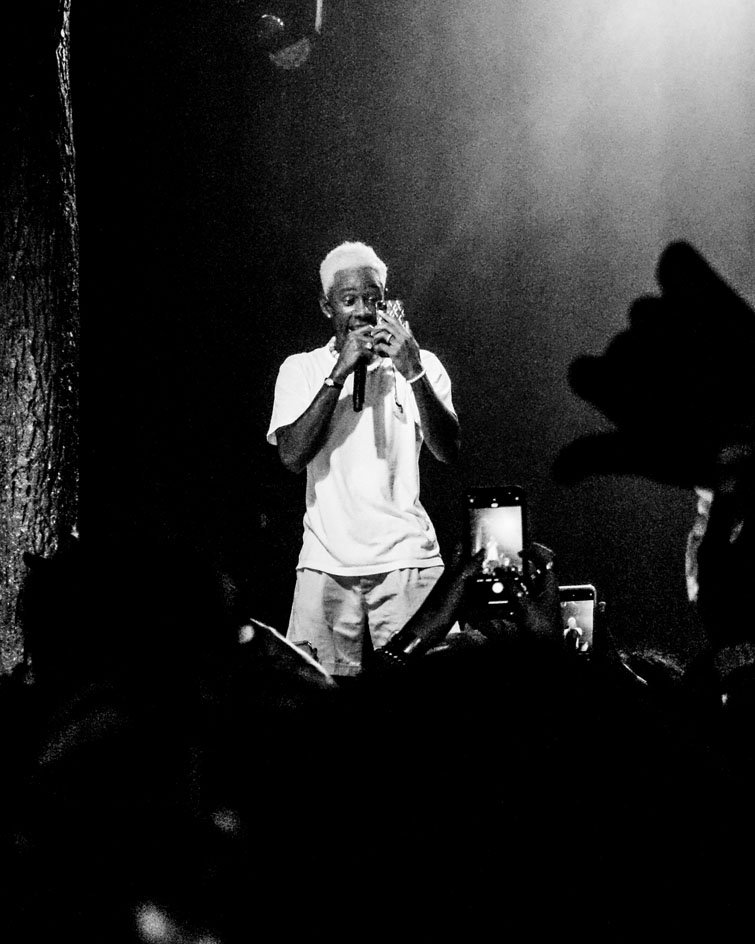 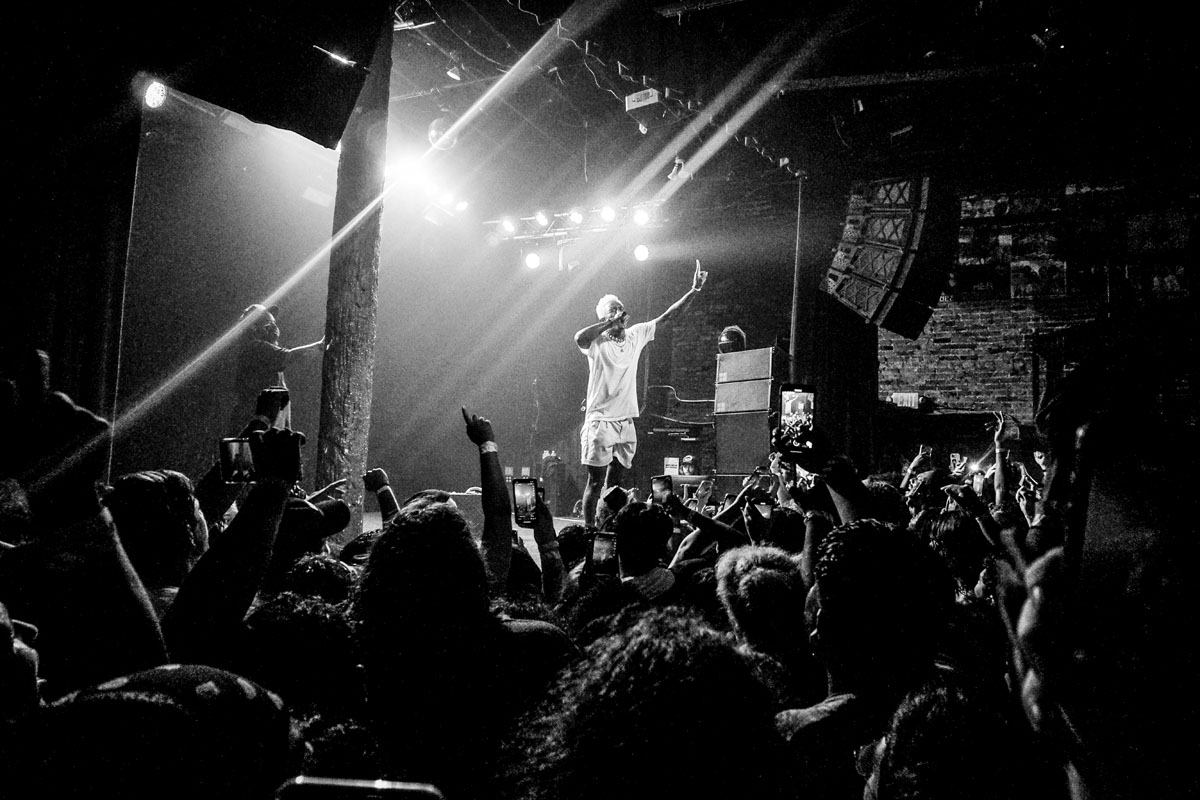 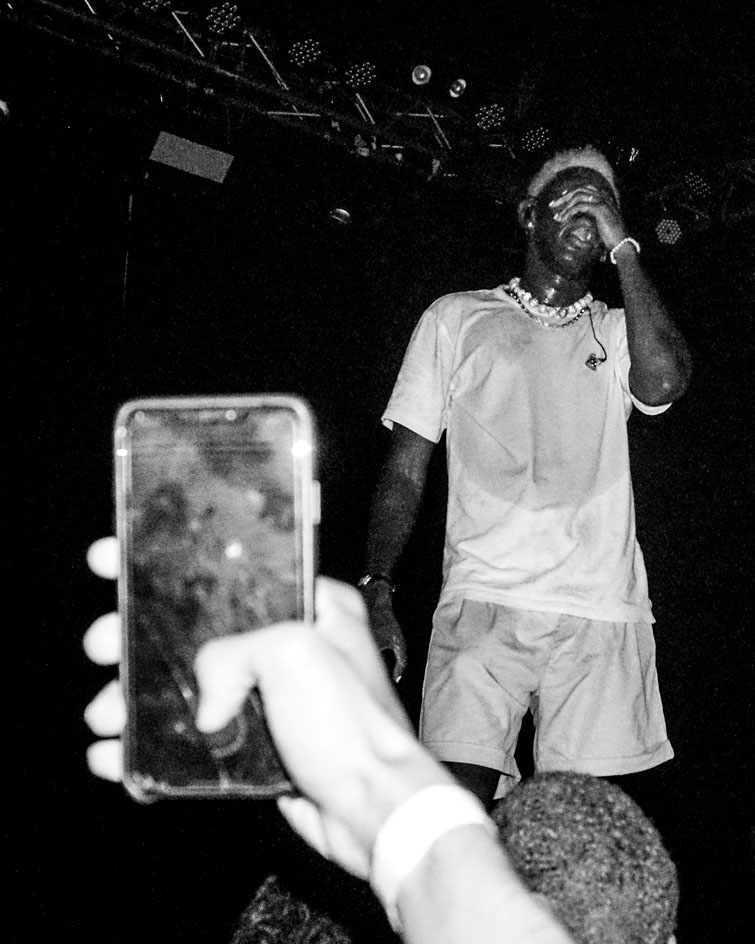 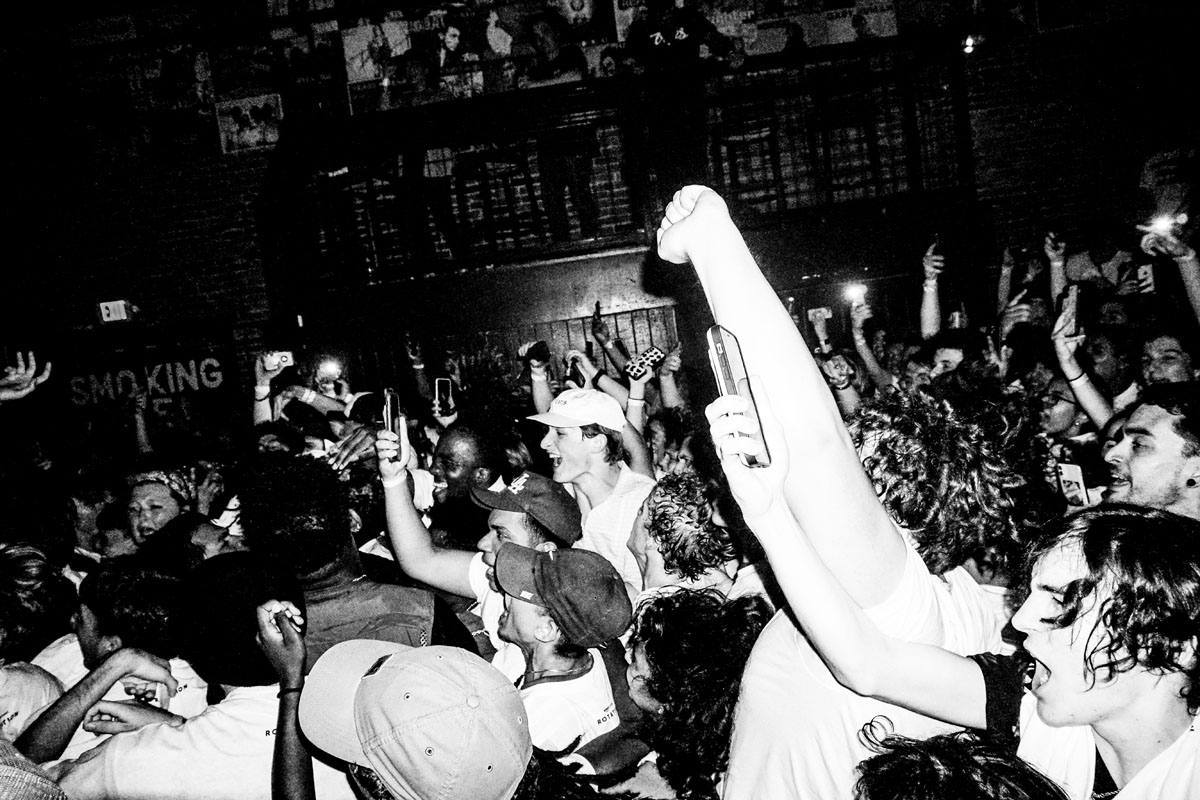 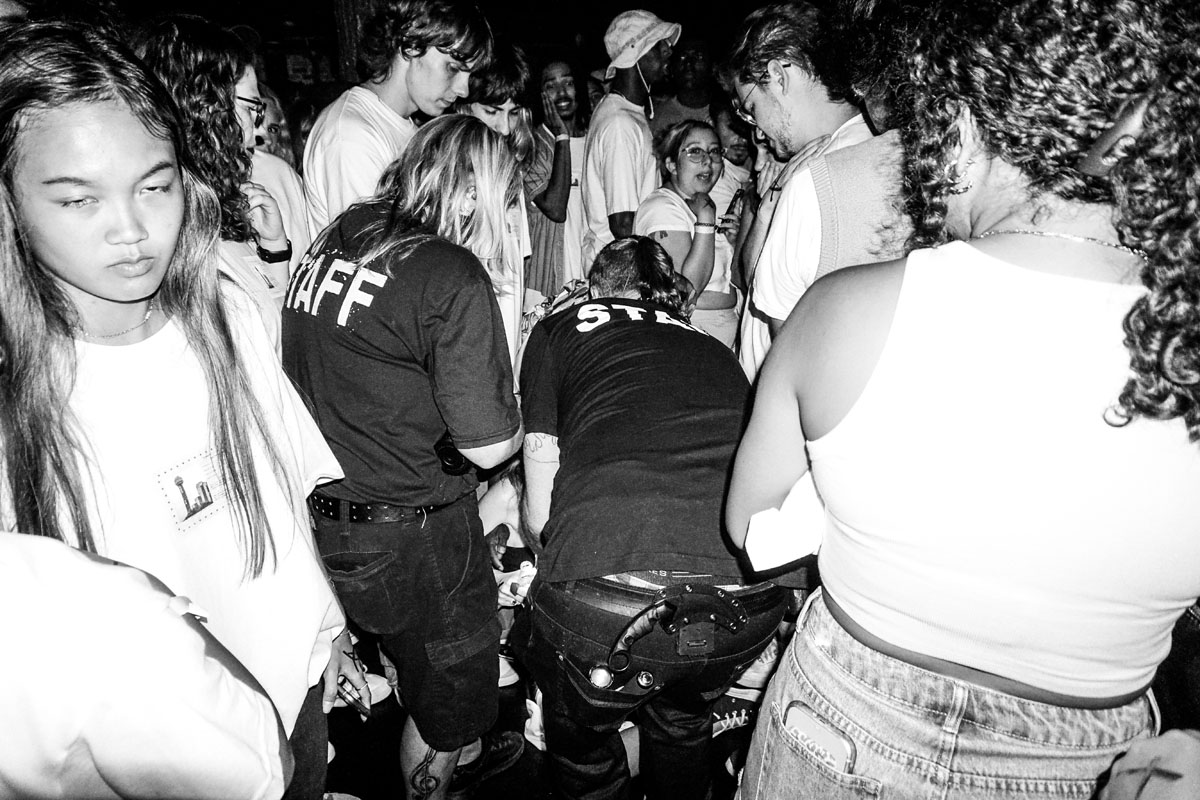 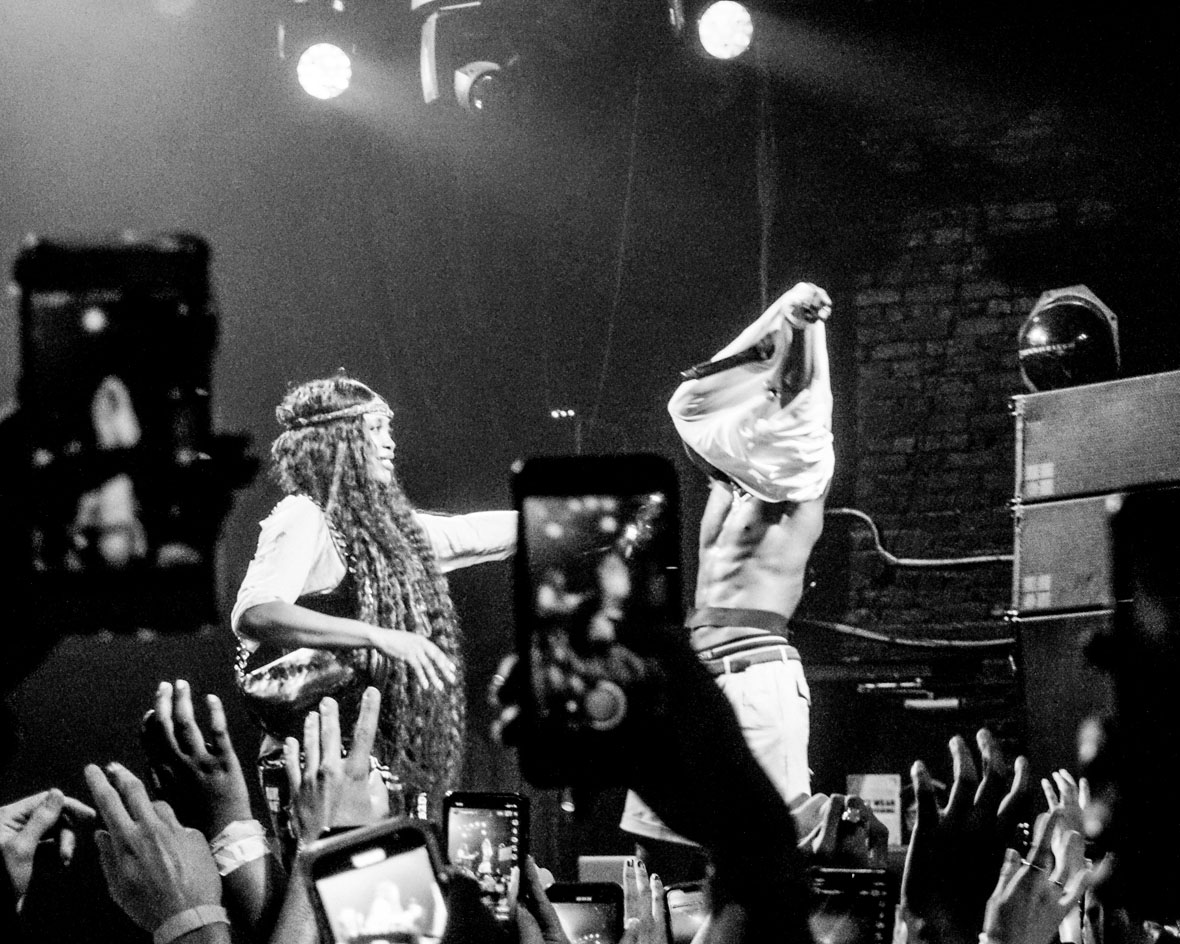 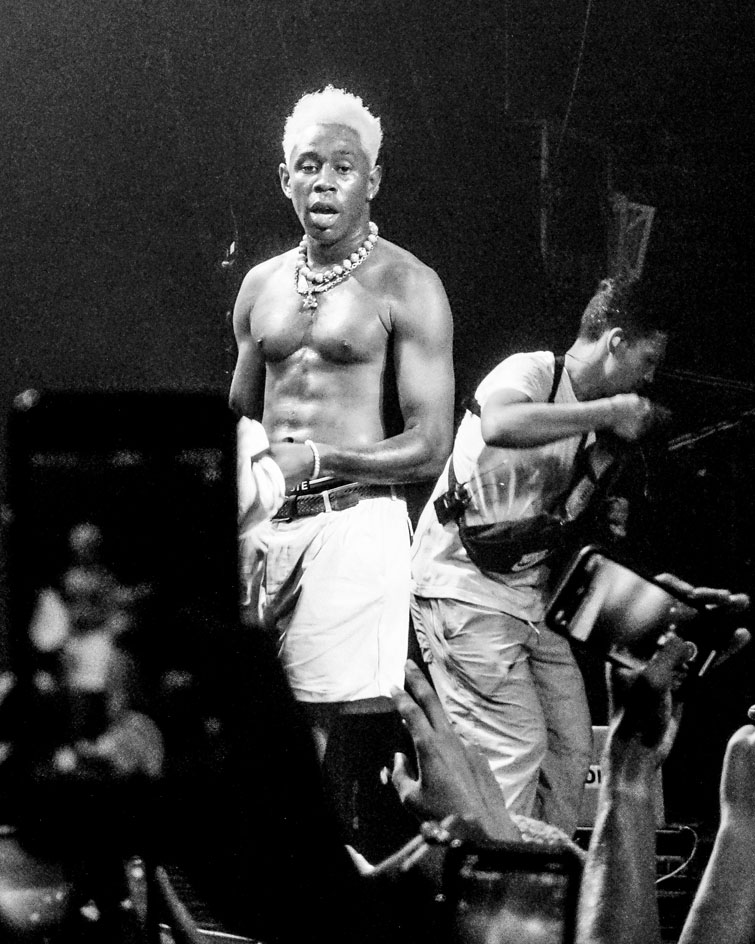 Celebrating His Just-Released ‘Call Me If You Get Lost’ LP, The Subversive Rapper Played A Pop-Up Concert At The Deep Ellum Venue Trees On Wednesday Night.

A few days removed from his stellar, Broadway-level performance of new single “LUMBERJACK” at the BET Awards and the morning after having performed a surprise, pop-up show at The Roxy in Los Angeles, Tyler the Creator fans in North Texas — or those who had signed up for messages from his promotional team, anyway — awoke to a pleasant surprise on their phones at 9 a.m. on Wednesday morning.

It was a text message teasing the distribution of… well, something for fans of the performer who were available and able to line up outside of the Deep Ellum venue Three Links beginning just a few hours later a noon.

Even without any details available, plenty did just that, lining up under the heat of the Texas sun for almost an entire city block’s length down the Elm Street.

The current scene at Three Links in Deep Ellum, where @tylerthecreator fans were told via a fan club text to line up at 12 for limited quantities of… something.

And what’d these superfans get for their trouble? Free tickets to another “secret” and surprise show — Tyler’s second in as many nights — set to go down at the 600-person capacity venue Trees just across the street a few hours later on Wednesday night.

Saying that this youthful group was stoked about securing such a score — a chance to see Tyler performing songs off his rightly acclaimed and just-released sixth studio LP, Call Me If You Get Lost and for free? — is an understatement. Some fans didn’t even bother leaving the block after waiting in that first line; they just crossed the street and queued up in another one in advance of doors opening at 7 p.m.

To be fair, their excitement was justified: It’s been a decade now since Tyler could be seen in Dallas rooms this size. During his most recent tours through town, he’s been playing rooms some eight times as large as Trees.

So, once the show finally kicked off shortly before 9 p.m., the crowd was more than primed for a cathartic, explosive celebration of their exclusive admission into Tyler’s intimate offering.

Soon as the venue’s red curtains opened to reveal an equally hyped Tyler on stage — igniting a mad dash to the front of the room in the process — the crowd just went off. Just as impressively, they kept that energy up for the hour-long showcase that followed.

For his part, Tyler seemed to understand how special an event like this was to the young fans who’d crowded into the room to see him. Near the start of his set, he explained (somewhat) how this show came to be, and how unique he knew it was: “I love playing small shows. I love feeling y’all sweat. Y’all who got in here are lucky as fuck!”

Of course, its fun fan service notwithstanding, Tyler came to this gig with the agenda of championing the latest song catalog additions — and he mostly kept his focus squarely there on this night.

“Let’s do some songs,” he said matter-of-factly before launching into his second song of the night, a lively performance of his new “CORSO” single.

Of course, looking around the room on this night, it was clear there were some larger, additional plays also in the works.

For one thing, every guest was handed a T-shirt commemorating this one-off date upon entry into the venue — a freebie underwritten, as a screen-printed logo on its backside notes, by Amazon Music. 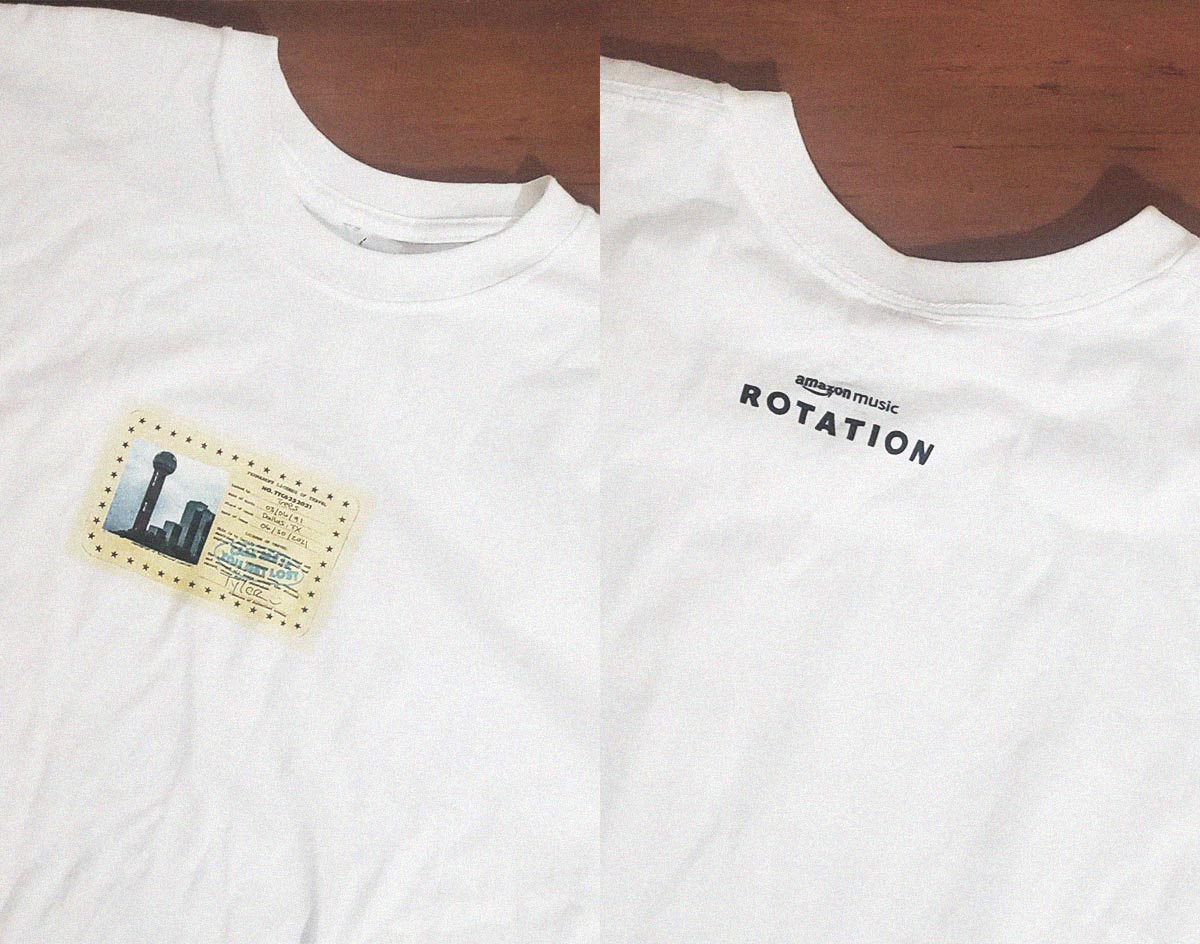 Near the sound booth, meanwhile, a massive camera rig was pointed at Tyler, its captures no doubt being abetted by footage grabbed by the videographers who lurked in the shadows on stage behind Tyler as he rapped over the screams of his adoring fans.

What was this footage for? An upcoming music video? An upcoming documentary, perhaps? Maybe just run-throughs to prepare the crew for the Twitch broadcast of a third pop-up show Tyler just announced he’s performing on Thursday night in Brooklyn?

For his part, Tyler seemed intent on putting on a show that felt not just vibrant, but also professional. His set’s timing, it has to be said, was rather impeccable: Perhaps as a means of preparing himself for a summer filled with festival dates that require strict schedule adherence, his performance on Wednesday lasted exactly an hour long — down to the second, pretty much, as it kicked off at 8:52 p.m. and ended right at 9:52 p.m.

Speaking of that ending: It came with something of a cherry on top. Right before exiting the stage, Tyler welcome his Dallas-based collaborator Erykah Badu to the stage — not to sing or anything, just to say hi. It was a blur of a cameo (for what it’s worth, the Dallas-launched and quickly skyrocketing Marc Rebillet, a Badu collaborator in his own right, was also in the building), that served as a fitting closing note on a memorable, day-long blur of a surprise gift for area Tyler fans.

The performer’s new LP may be called Call Me If You Get Lost, but if there’s one thing this 13-hour-long saga on Wednesday showed, it’s that there’s a whole gang of North Texas ready to drop whatever they’ve got on deck as soon as they receive a text from him.