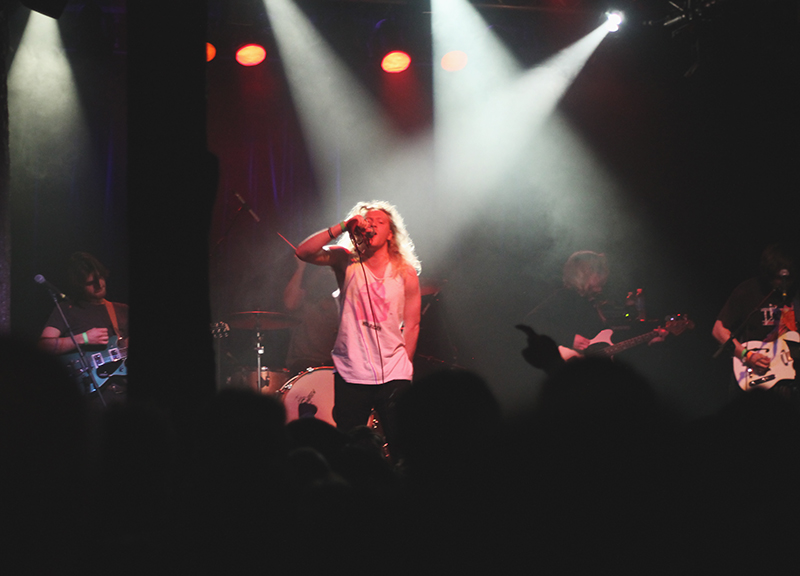 Things Got Ugly At The Orwells’ Headlining Spillover Music Festival Set at Trees on Saturday.

Seems most people around Dallas are at least passingly familiar with the story of what happened at Deep Ellum venue Trees a quarter-century ago this year: Long story short, on October 19, 1991, and just as Nirvana was reaching its height in fame, Kurt Cobain got into a fight with the security staff. It is truly the stuff of legend.

As for the scene at Trees last night when Chicago snot rockers The Orwells headlined the second of Spillover Music Festival’s three nights? Well, it was probably not quite on that level.

But it sure shared a lot of the same elements.

Here’s what went down:

• All set long, Orwells frontman Mario Cuomo repeatedly spiked his microphone onto the stage between songs, leading to loud pops reverberating through the venue’s PA system and damaging the equipment some in the process.
• The Orwells also repeatedly allowed crowd members on stage for stage dives.
• At one point, Cuomo ranted on the Nirvana-at-Trees story and described the venue as the only place where Cobain was punched out.
• About 45 minutes into the set, Cuomo warned that he wasn’t feeling well, threatened that he was about to puke on stage and pleaded with staff to bring him a trash can that he could vomit into. Trees staff complied.
• Shortly following that, and after a final mic spike, Trees staff cut off the band’s sound, turned on house music and started to close the stage curtains on the band’s performance.
• In protest of being cut off, the band and its fans then lunged at and tore down parts of the stage curtains.
• Amid the confusion, a fan hopped on stage, grabbed the garbage can that the staff had brought Cuomo to vomit into, and then violently slammed the trash can into the crowd below.
• The situation just got uglier from there as fans, band members and security staff alike tussled with and threw punches at one another on stage.
• Eventually, the band was ushered off stage to the green room upstairs, and venue staff started to kick everyone out of the building, closing things down for the night.

We have compiled some video clips of the above, courtesy of some audience members who were filming during the melee. The first half comes courtesy of Bella Aguilar. The second part is from Jennie Ross.

A third audience member sent us the below clip, too. This one comes from Zach Longobardi and recaps snippets from the whole show. The meltdown begins at 3:49. Says Longobardi about that part of his video: “This is right after [Cuomo] threw the mic down at the stage and they cut his mic off.”

Shortly after the incident, we reached out to the band, the venue and the festival for comment on what happened. Here are their statements.

John Iskander (owner of Parade of Flesh, the main promoter behind Spillover): “Shit happens at shows, and there’s two sides to every story. There are multiple angles — and hopefully video that surfaces — that can be looked at. I think we should view all of those.”

The Orwells: “Seems like history is made once again at Trees.”

Spillover continues today at Trees, Dada and Three Links. Head here for tickets and info. Cover photo of The Orwells by Pete Freedman.
No more articles