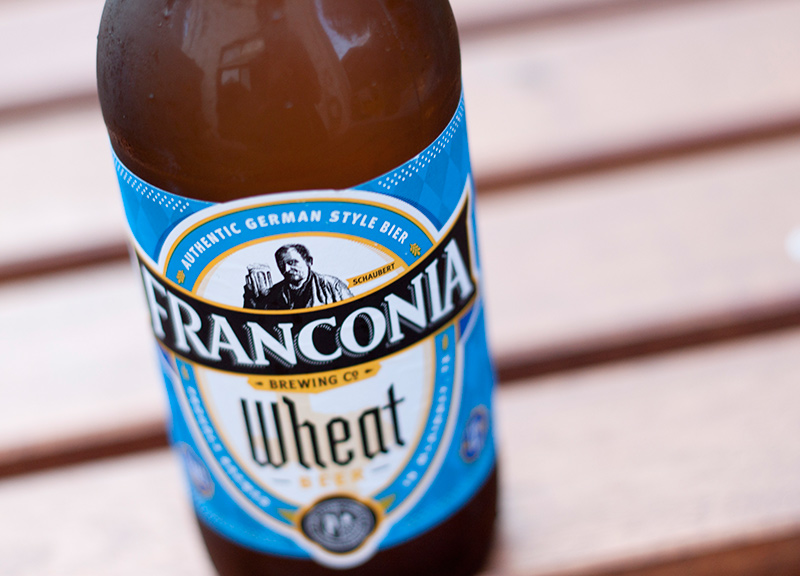 Franconia Wheat Can’t Keep Up With The Better, Newer Wheat Beers In The Region.

This week, we sipped on Franconia Brewing Company‘s Franconia Wheat.

Background.
You could make a strong case for Franconia Brewing Company being at the extreme forefront of the microbrew trend that’s currently sweeping the Metroplex. Franconia’s certainly one of the veterans of the scene, if nothing else: The company has been satisfying DFW palettes with German-inspired brews since 2008, making them the second-oldest currently operating craft brewery in the region — behind only Fort Worth’s Rahr & Sons Brewing Company. And, for years now, the Franconia Wheat has been one of the brewery’s flagship beers. There was a time (before they started branching out to the likes of Double IPAs) when my sole association with Franconia was its Wheat offering. So it’s safe to say that this is a core beer in the company’s repertoire. There’s a new twist, however: Recently, Franconia began bottling their brews. And that gives me the opportunity to sit down with a Franconia Wheat at home for this overdue review.

A Primer on German Weizens.
According to the Beer Judge Certification Program (BJCP) style guidelines, a true German Weizen (German Wheat beer) should have a moderate aroma of clove (phenols), fruity esters (banana) and wheat. German Weizens are pale straw to very dark gold in color with a long-lasting head. When drinking, you should notice balanced flavors of banana and clove, bready malt and some yeast characteristics with low levels of hop aroma and bitterness. These beers have a medium body and are generally highly carbonated.

Appearance.
Franconia Wheat pours from the bottle with a one-finger creamy white head that fades to just a thin covering across the top of the beer within but a few minutes. The beer is a cloudy gold amber, which is accentuated by the small amount of yeast at the bottom of the bottle. Given the style, though, the visual appearance is rather disappointing. Part of the fun of drinking a German Wheat is in admiring the beer’s massive and long-lasting head as you drink — and that experience is decidedly missing here.

Aroma.
This is where Franconia Wheat excels the most, but that”s not saying much. You’ll notice some fruity banana, yeast and bready malts on the nose. These are all classic Wheat aromas, but they’re a little muted in comparison to beers that may be a closer match to the style.

Flavor.
Here’s where Franconia completely loses it. There’s something very off about this beer, which is entirely unpleasant. It has a certain slick, almost oily mouthfeel — and a completely surprising utter lack of a finish. Instead of a bit of carbonation, hop bitterness or really anything at all there to invite the drinker to take another sip, this beer offers nothing. It’s almost as if it were watered down like a cheap well drink at a local dive bar. This is in stark contrast, too, to what is actually a decent initial impression: On first sip, there’s some moderate hop bitterness, mild yeast flavors and a touch of malt sweetness. There’s not a lot of flavor depth here, no. But that still doesn’t suggest a product that would finish so poorly.

Mouthfeel.
As stated above, this one’s got low to moderate levels of carbonation with a slick, oily mouthfeel.

Overall Impression.
I wish I could chalk this experience up to a bad batch. Brewmaster Dennis Wehrmann has too strong of a pedigree and reputation in this town to be producing a product this unenjoyable. But a quick search of beer-review site Ratebeer reveals similar comments over the last several years. Not all of these takes are bad, but terms like watery, odd aftertaste, light body, boring, and bland all occur with too much frequency to completely dismiss. At the end of the day, there are far better Wheat beers being produced in North Texas at the moment (Blood & Honey is an obvious example). Don’t go out of your way to seek this one out.