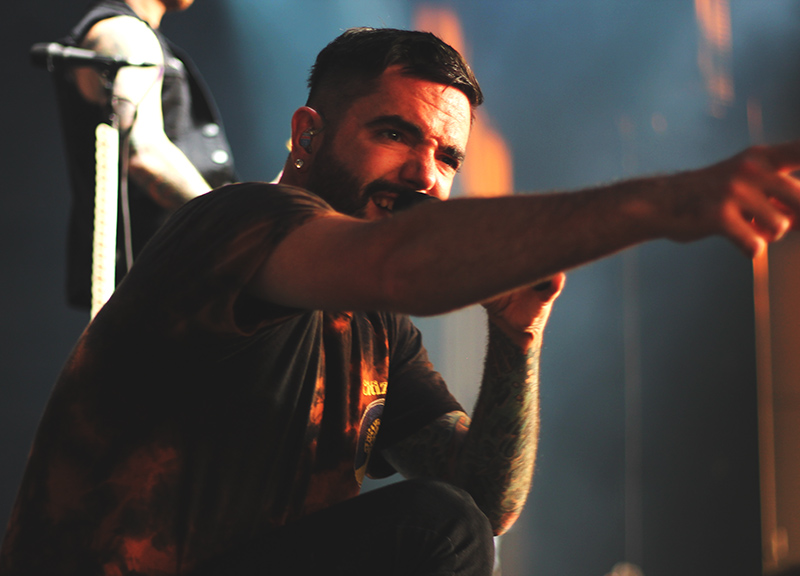 On Friday Night At Gexa Energy Pavilion, Blink-182 Mixed In A Few New Tricks With The Old.

It was about five songs into Friday night’s Blink-182 show at Gexa Energy Pavilion in Dallas when the first dick joke of the night came. And, honestly, even by Blink’s historically sophomoric standards, this crack was pretty damn lackluster, with bassist Mark Hoppus announcing to the crowd that he’s always enjoyed Dallas because he and the city share the same nickname: The Big D.

Cue many an audible groan across the sweltering amphitheater.

Listen, Hoppus is 44 years old at this point. An actual father too. So dad jokes masquerading as dick jokes were probably the biggest given heading into Friday night’s show. Less immediately clear was how the band would actually look and sound while performing and interacting with one another at this point, now that the expatriation of guitarist Tom DeLonge is wholly complete and now that Alkaline Trio’s Matt Skiba has been fully integrated into DeLonge’s old position to Hoppus’ left.

Fortunately, there were reasons heading into Friday to be hopeful about this change. For one, DeLonge isn’t the first band member that Blink’s ousted; firebrand drummer Travis Barker didn’t join up until 1998, when he replaced founding member Scott Raynor just in time for 1999’s Enema of the State and served, rather objectively, as a massive upgrade. For another, this year’s California LP, the band’s seventh studio LP and its first with Skiba on guitar, is every bit as strong, cohesive and catchy a release as 2011’s Neighborhoods was a weak creative mess.

Still, there were reasons too to be doubtful about how well the band could pull its new look off — namely, that Skiba’s vocals sound a bit too similar to Hoppus’ and that they’re a far cry from the ever-distinctive DeLonge’s, whose efforts Skiba would essentially be covering for the better part of this set.

An easy solution there? Stack the setlist with new tracks, which the band happily did, with six songs from the 80 or so minutes that the band played coming from California. On those songs, Skiba sounded pretty darn great — confident, secure, even comfortable. On other songs, a few issues came to the forefront. Most specifically, there seemed a bit of a sound issue: Either Skiba was a bit timid singing DeLonge’s parts or his vocals just don’t cut through like DeLonge’s used to or the mix was just off; regardless, his voice was often unfortunately muddied when compared to Hoppus’ crystal clear takes.

No matter, really. The California cuts were where Skiba needed to sound strong, and did; on the other songs, the Gexa crowd mostly just clamored for singalongs, which it received in spades with the cuts from across the band’s now 24-year run (!) that were present in the set list.

The band could maybe have been a bit tighter, though. It needed a few seconds to gel on some songs — most notably on the encore-closing “Dammit,” which started off disappointingly sloppily. It was an observation made more obvious, perhaps, following the remarkably tight effort from main support act A Day To Remember, which sounded studio while its members sprinted from stage left to stage right all damn performance long.

But for a band this resilient, this shockingly still relevant and important, and this surprisingly “classic” for its younger generations of fans, Blink-182 still hit the euphoric high points it needed to hit. And it even threw it a few surprises — like during the short jaunt “Blow Job,” during which Hoppus played guitar, Skiba played drums and, according to Hoppus, Barker made his live show debut on bass.

“See?” Hoppus said after that quick trick. “We’re not bad at our instruments. We’re not even bad at each other‘s instruments.”

Nope, not bad at all — even if that moment stood in contrast to what the rest of the performance seemed to showcase. Whereas previous Blink shows often delved into games of crass joke one-upmanship between Hoppus and DeLonge, neither of whom could ever fully be called the group’s sole front, this show was remarkable with how clearly defined the band’s roles are now — and how happy this seemed to make all parties involved.

Perhaps in the future, Skiba will get more comfortable, more vocal. For now, though, Blink seems like it’s fine letting Hoppus, its lone remaining founding member, drive the ship. How that will play out in the long run is anyone’s guess.

But, at this point, the important thing is that the ride hasn’t yet ended and that, against all odds, it’s still a great time. 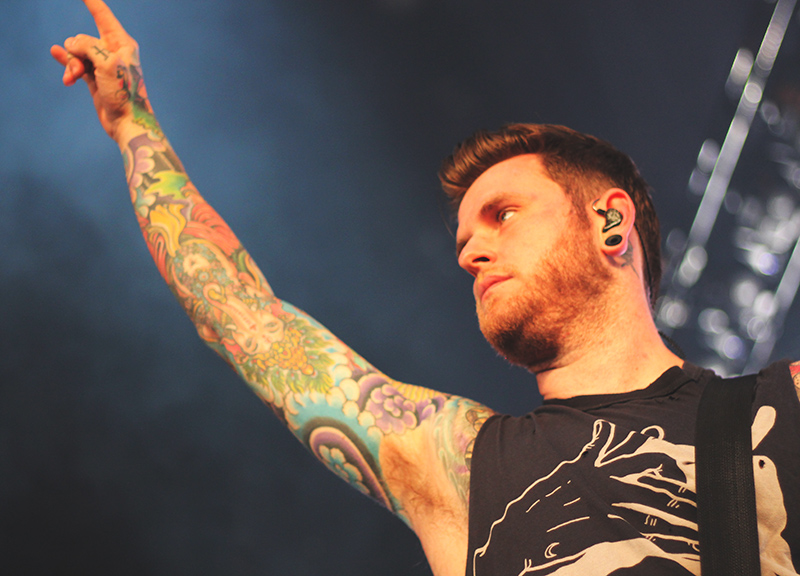 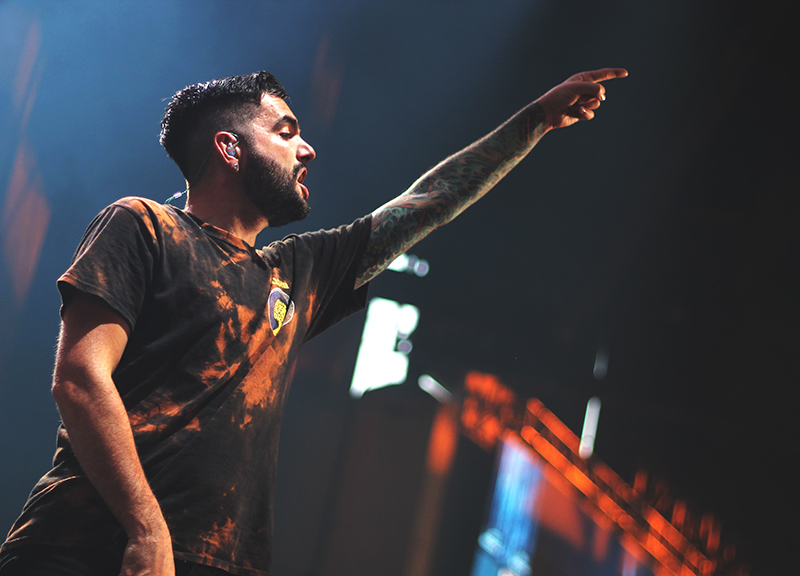 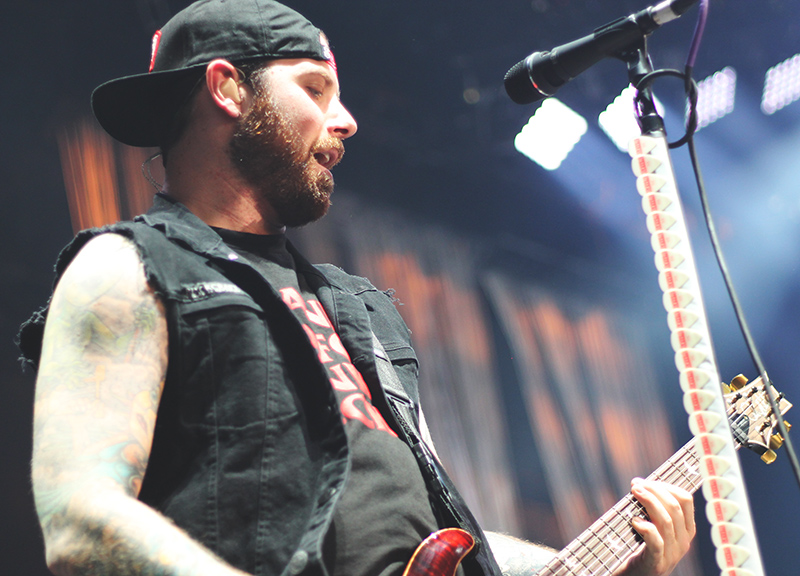 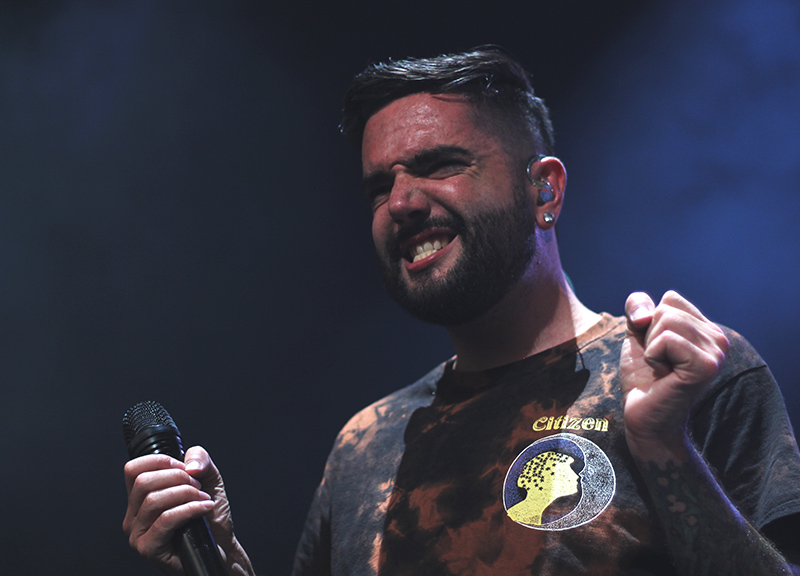 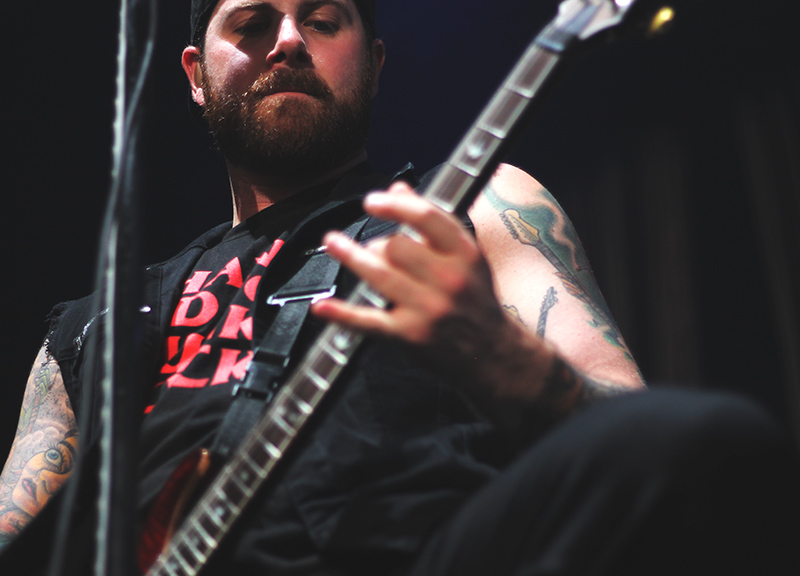 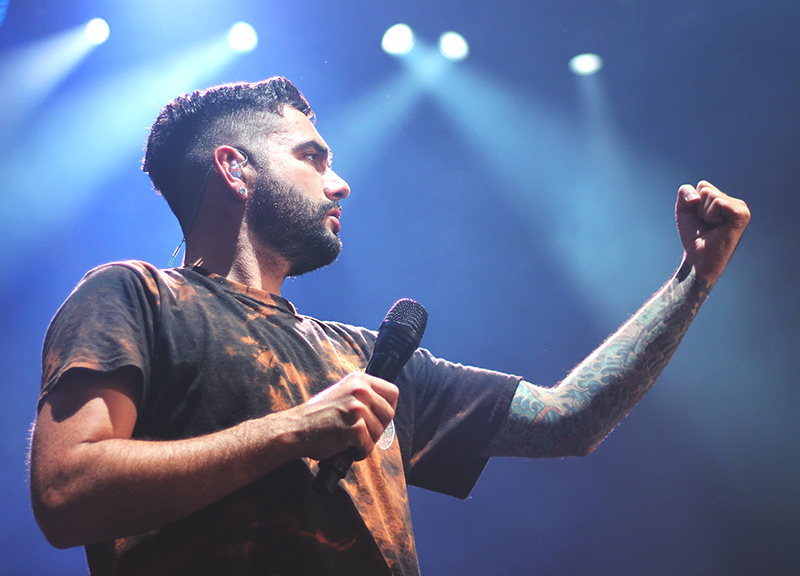 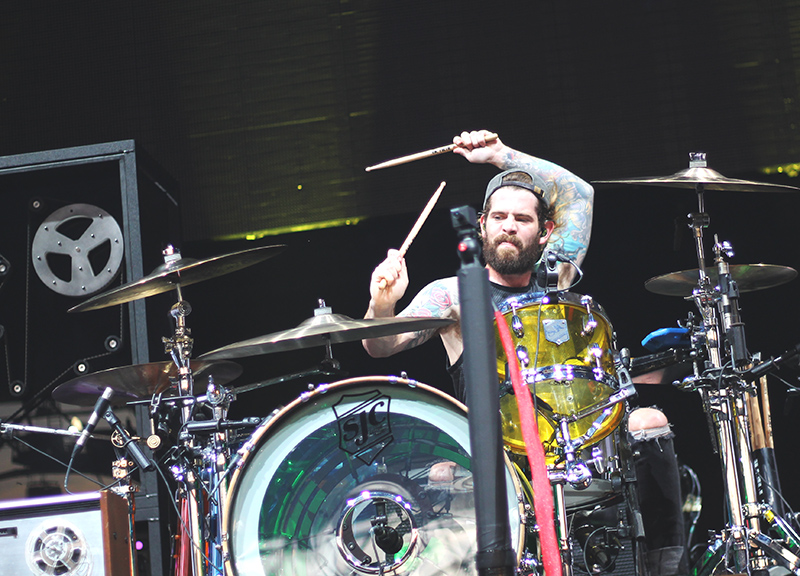 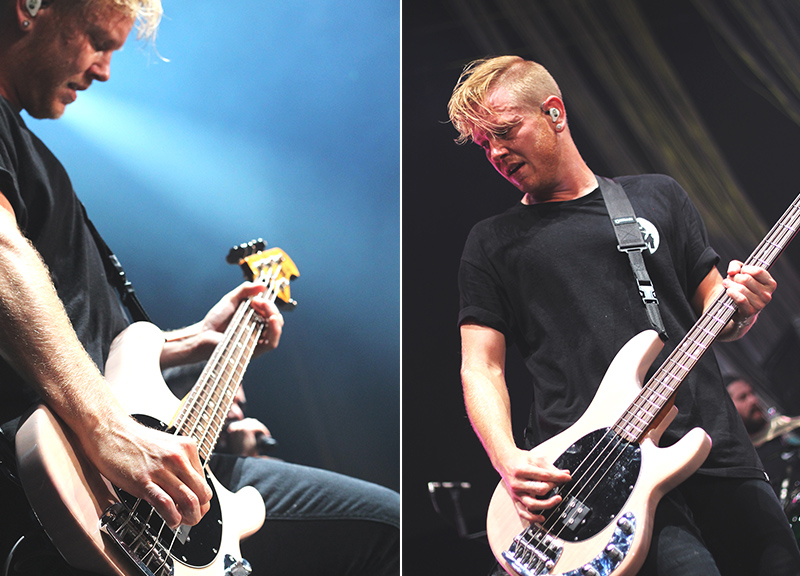 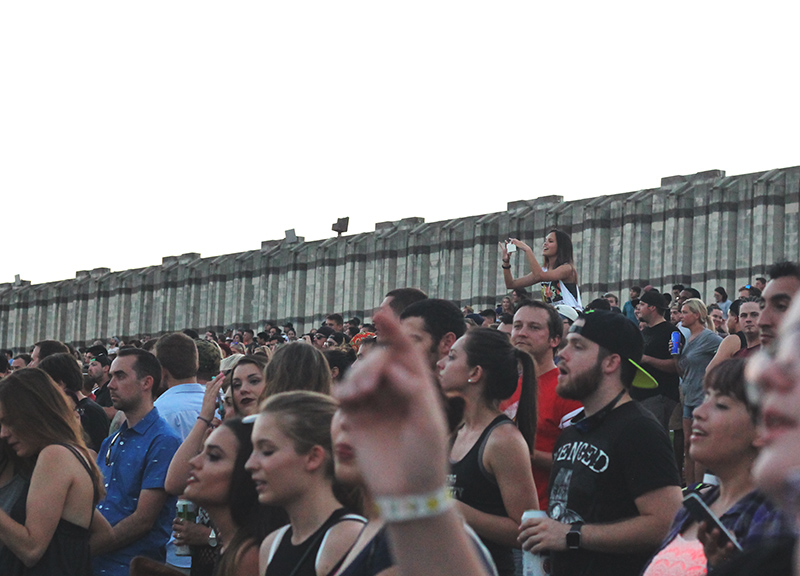 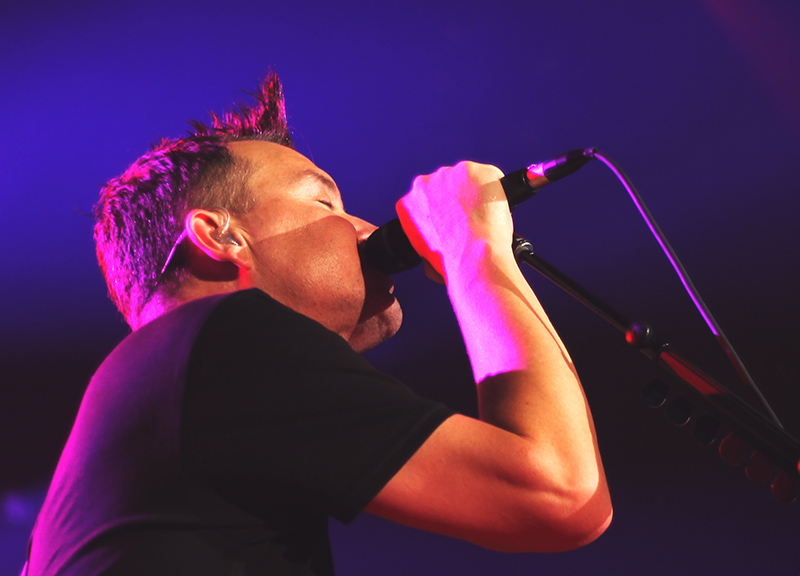 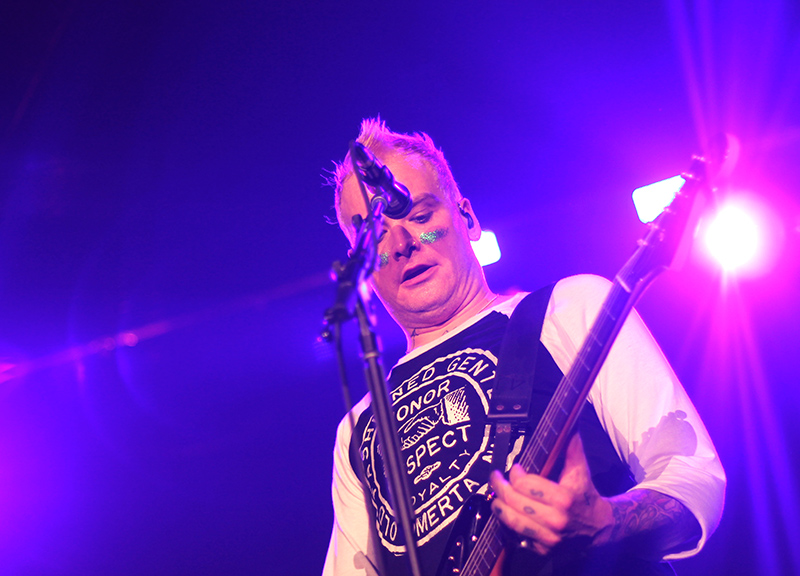 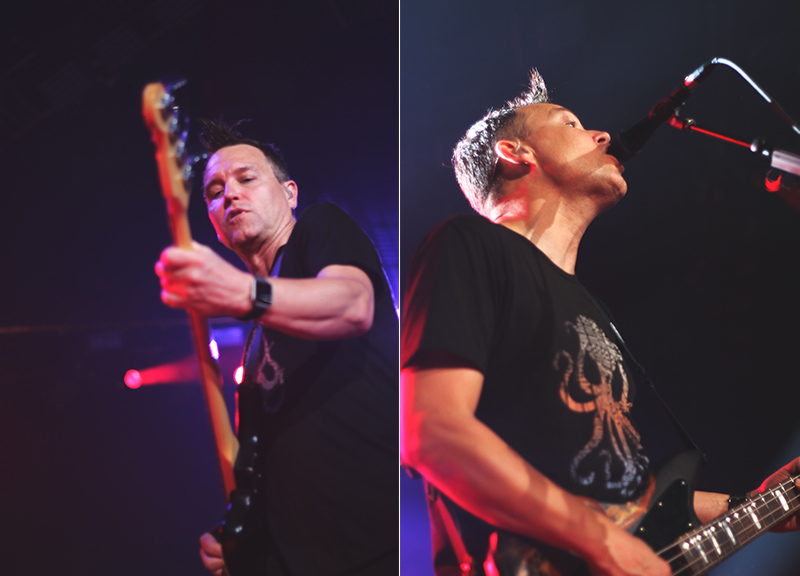 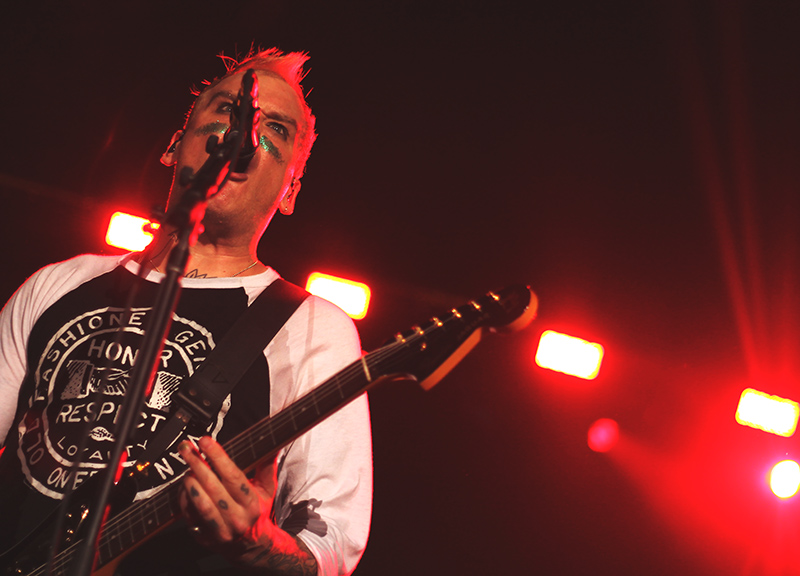 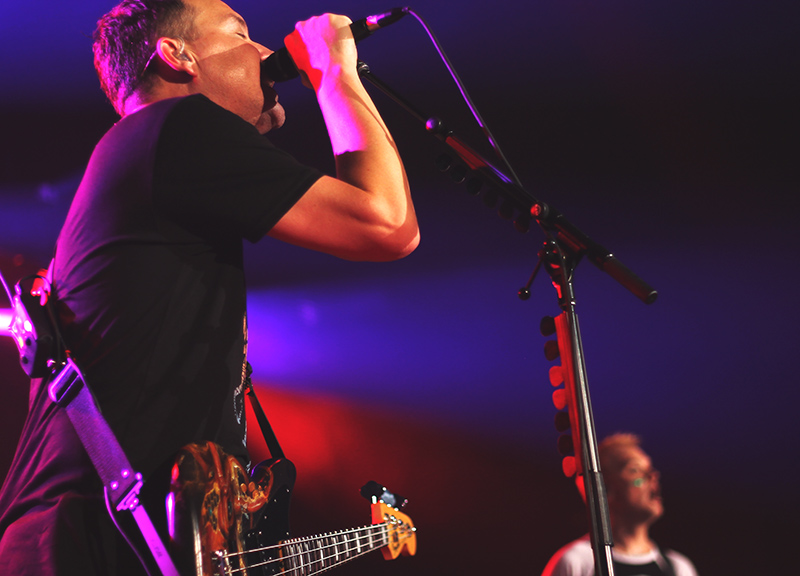 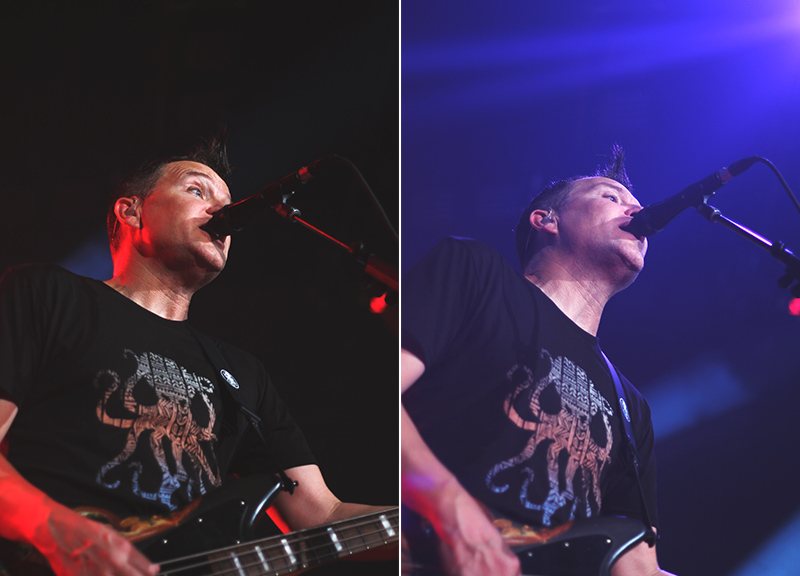 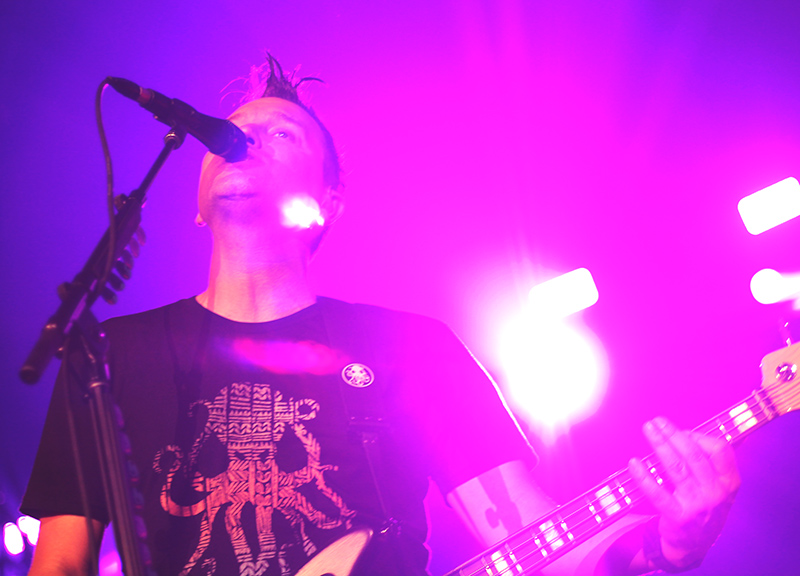 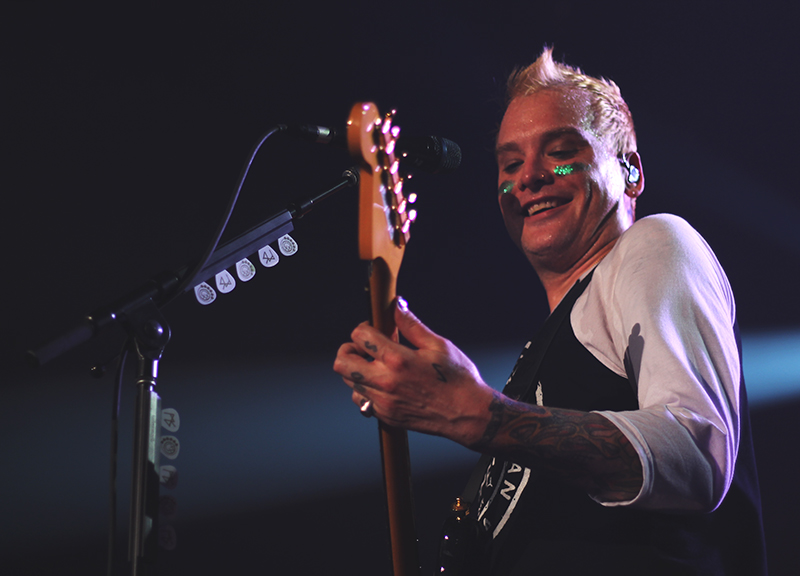 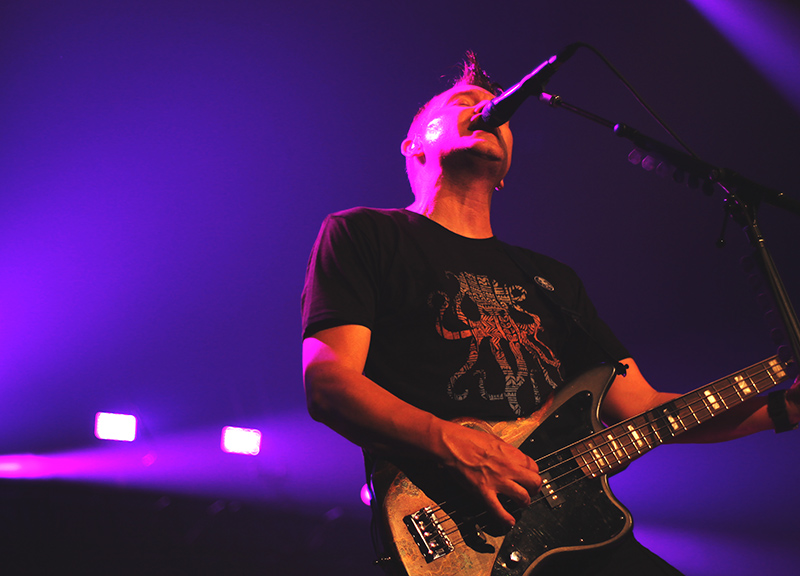 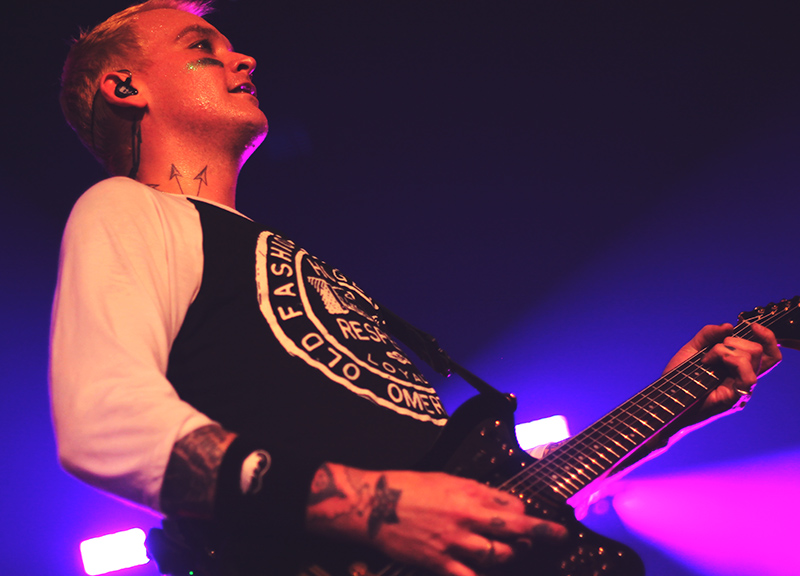 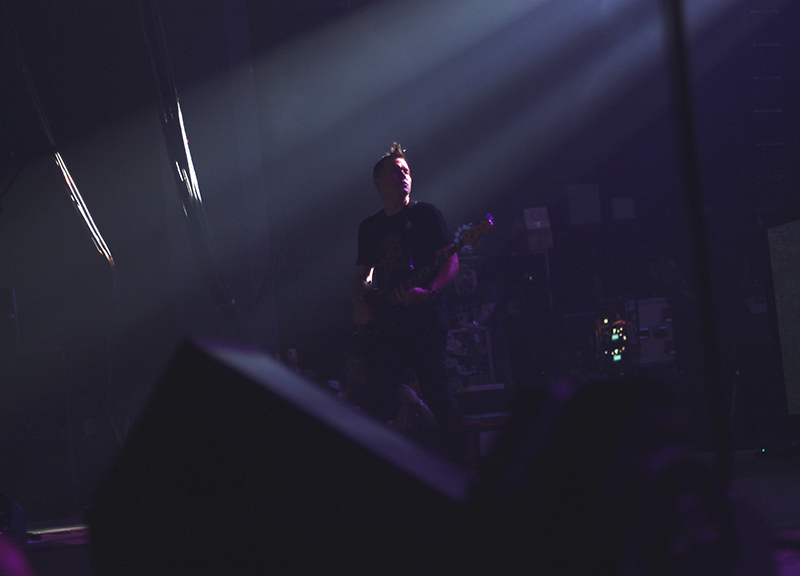 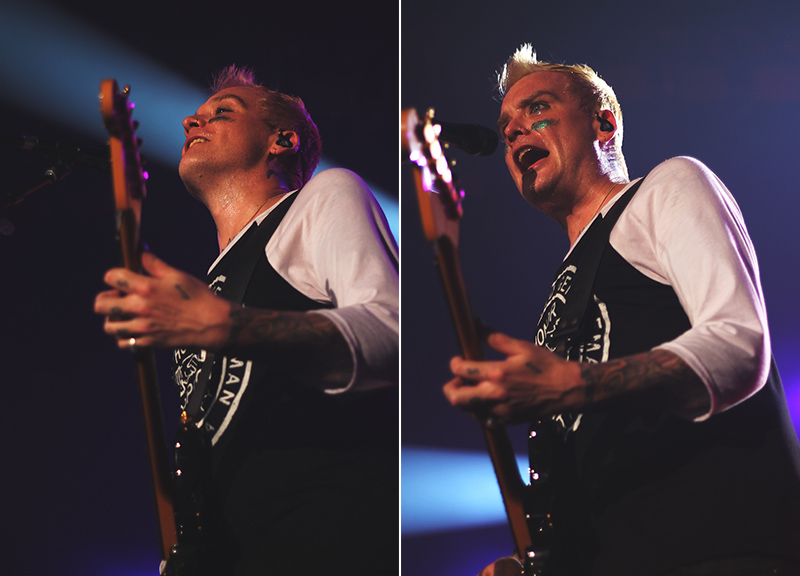 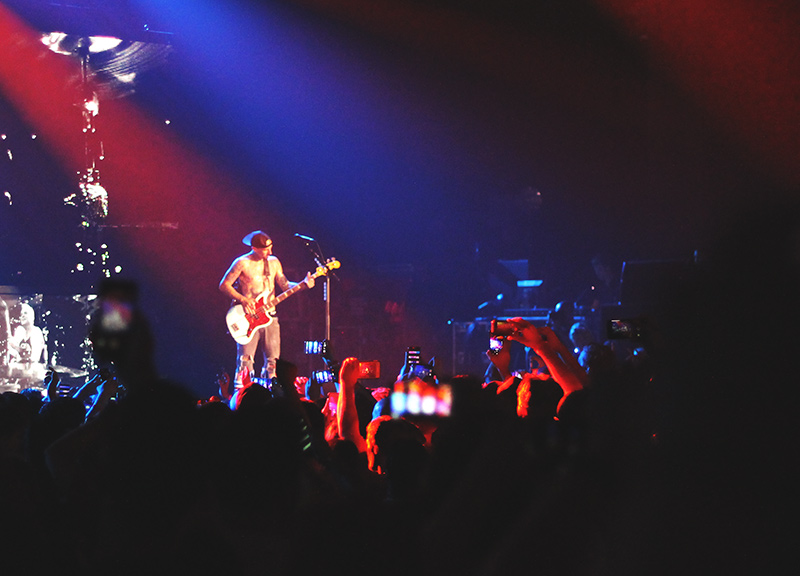 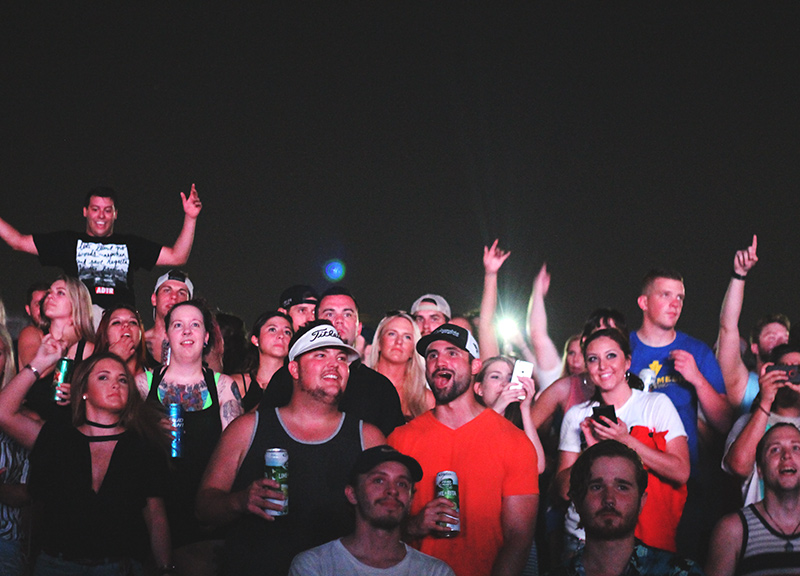 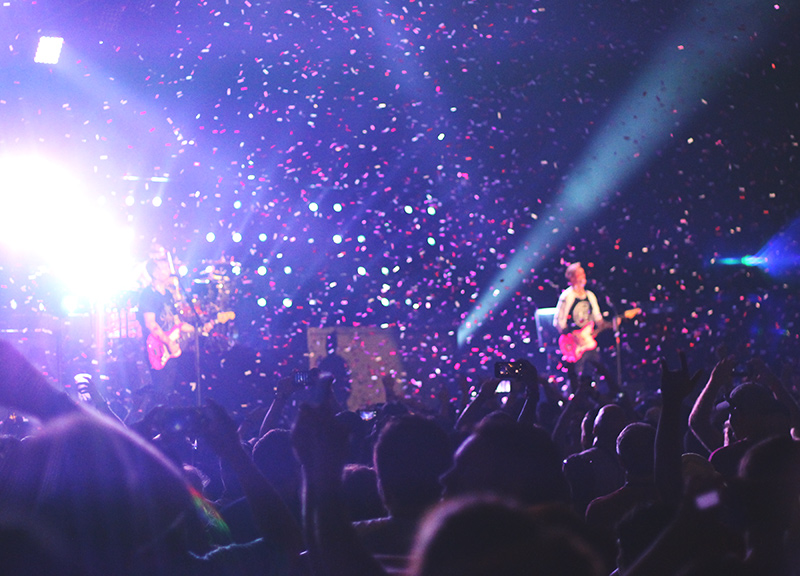