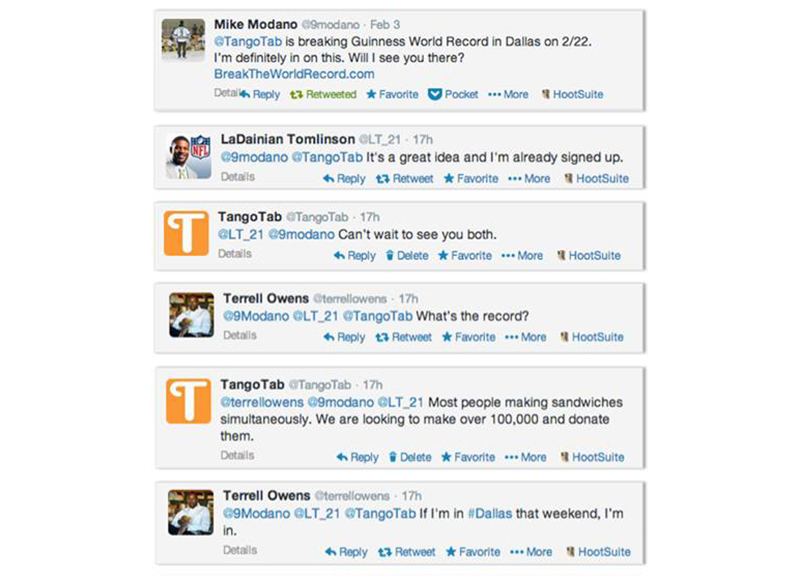 OK, it's not as weird as that headline suggests. There is indeed a reason why the best-ever Horned Frog, the NFL's tops all-time touchdown celebrator and the single-greatest American-born hockey player in history are joining forces to ask folks to join them in breaking the world record for the most people simultaneously making sandwiches together: They're doing so for charity, as was explained to T.O. over Twitter yesterday:

They're also doing so in celebration of the locally based Tango Tab app's two-year anniversary. Which is, of course, the method behind all this madness: Tango Tab's whole mission is charitable, you see; the app offers diners deals on their meals at restaurants around town, then in turn promises to make a donation to local food banks when those deals are redeemed. So it's doubly good in that regard. And, according to Tango Tab's site, the company has fed more than 250,000 to date.

This event, which will go down at the Hilton Anatole on Saturday, February 22, aims to add a significant number to that total: The company is trying to get 1,000 people together to bring the necessary supplies and build 10 sandwiches each. If that happens, this absurdly specific Guinness record is all Tango Tab's — and potentially yours, too.

You can sign up to join in on the action here. Either way, all the sandwiches made will be donated to people in need.

Cover photo via via MikeModano.com.