Moving Panoramas Is Based In Austin, Shaped By Dallas. 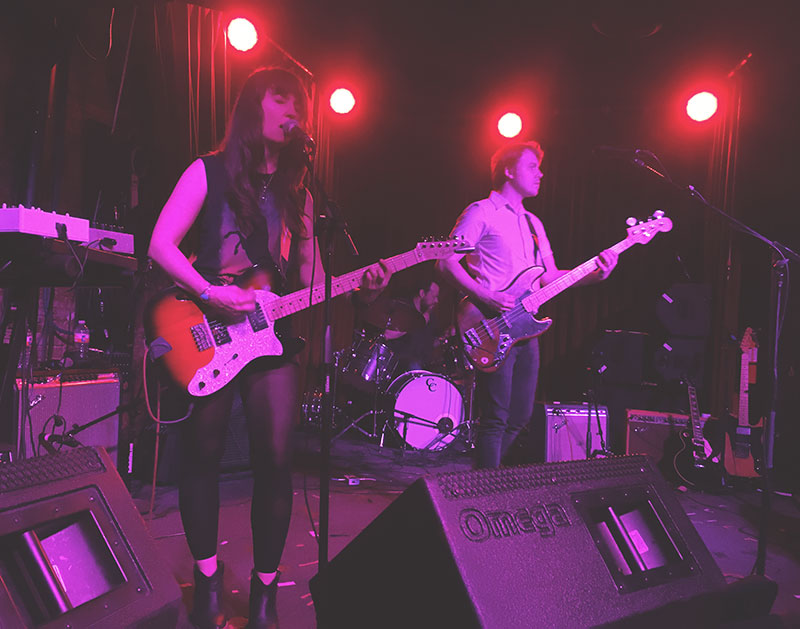 Duncanville Native Leslie Sisson On How Catching A Random Bedhead Show At The Galaxy Club In The ’90s Helped Shape Her Austin-Based Band, Moving Panoramas.

On Friday night at Club Dada, Pavement co-founder Scott Kannberg serenaded a crowd while performing at Club Dada under his Sprial Stairs moniker.

It was a smaller audience than he and his band had seen the night before when his band rocked a full house at 3ten in Austin, but you wouldn’t have known that from the energy put out by Kannberg and crew onstage. Friday’s was a captivating performance: As the set progressed, Kannberg’s melodies pulled in a good amount of curious onlookers who were finagling their way along Elm Street, and showcased to those in attendance why he is considered such an integral part of the ’90s rock scene.

Earlier in the night, the band supporting Spiral Stairs on the Texas leg of its tour was Moving Panoramas, a group led by Duncanville native Leslie Sisson. That band too impressed at this Dada show, soothing the crowd with the spacey melodies from its 2015 debut LP, One.

That was an exciting thing to see, to be sure. Moving Panoramas has a loyal following in Austin, where the band is currently based, but Sisson clearly relished the chance to showcase her art in her hometown on this night.

She said as much when I caught up with her after her band’s set to discuss the latest with her band.

What first got you into the scene in Deep Ellum?
While I was in high school, I was in a band with some older people that went to Cedar Valley College. They were in the recording school there, and they pulled me to shows. They brought me to Deep Ellum. I didn’t know anything about it at the time. My bandmate took me to a show at the Galaxy Club to see Bedhead. The show was attended by maybe 20 people. They had a couple records out, though, and he said it would change my life. And it did! They played and I had to actually sit down because I was so floored. They played a song called “Bedside Table” that changed everything for me. That was my first time in Deep Ellum, the first time I saw a show here. They didn’t even check my ID — but I was definitely too young to get into a show. That show changed me. All the music that I had prior was MTV — 120 minutes — and that kind of stuff was the only reach I had to the rest of the world. So coming down here was life-changing. Then I was here every weekend. Back then, it was so easy to be a kid and get into shows. Nobody really cared. It was like New Orleans in a way. I can say now that Bedhead got me out of Duncanville.

Did you have any other Dallas influences growing up?
Will Johnson, for sure. Centro-matic was huge for me. I grew up with Armin DeLaughter, who is Tim’s younger brother. So my parents know their parents. Tim DeLaughter’s wife babysat me. It was just by proximity that I was pulled into that. I remember Tim’s brother gave me a demo tape for Tripping Daisy, and I was like, “Oh, cool. That’s a funny name.” It was inspirational since they were from the same area — so within reach. I left pretty quickly because I wanted to get out of Duncanville, so I moved to Denton, then I moved to Austin. Then I moved to New York and back to Austin. When I went to UNT, I wanted to study music. Then I ended up wanting to do films. Even in New York, music was always there.

Where did you play your first show?
Ironically enough, the first show I ever played was at this exact place [Club Dada]. It was an open mic night. My family was there, and I was in a really bad band. We sounded as if The Sundays didn’t know how to play their instruments. It was terrible. I played in Dallas for a good while after that before moving to Denton for school. I left pretty quickly because I wanted to get out of Duncanville.

What venues have you played in Dallas so far?
We’ve played at The Armoury, and The Cavern which has rotated into a couple of different names. We played Lola’s in Fort Worth. But my absolute favorite place to play in Dallas is the Granada Theater. We were opening for Nada Surf there. It was always a huge dream of mine to play there. When I was a kid, we would go and watch movies. We would sit in the smoking section — the movie would play and you would see that layer of smoke — and it was so gross. When I was a teenager, we would go and sneak alcohol obviously. I could have died after that [Nada Surf] night because that was a dream come true. My whole family was there.

Do you have any thoughts on modern-day Deep Ellum? It’s been through a lot of changes over the years.
When I was in high school, it was very different than it is now. It was where the artists came, where different crowds came to get away from Downtown. It was very special. Our high school hangout was Café Brazil. Once all the people with money saw how cool this place was, it turned more into a less artsy kind of place to be. I hope I am not offending anybody by saying this, but Deep Ellum became Douche Ellum, and then it became a ghost Town. I remember coming back and wanting to drive down several years back, and I think I literally saw tumbleweeds. So I have seen the art phase, the douche phase, the tumbleweed phase. Now it seems to be back to the art phase, and that’s great because the city needs this area.

How did you end up in Denton and in Austin?
I wanted to get out of Duncanville, so moving to Denton changed me exponentially. I was surrounded by music. I lived across the street from The Argo, I helped build the stage at Rubber Gloves. I was a part of this blossoming scene. A lot of my friends had bands that never saw the light of day outside of Denton, but it was awesome. Like I said, when I went to UNT, I wanted to study music, but then I ended up wanting to do films. I moved to New York after I got my masters to continue that dream. So, I moved to Denton, then I moved to Austin, then I moved to New York and then back to Austin. When I moved back to Austin, it was to work for SXSW in their film department.

At what point in all there did Moving Panoramas begin?
I had moved back from New York and had been teaching at the School of Rock in Austin, and I invited my student to work on a record. I wanted her to experience everything that goes into making music, and it kind of snowballed into Moving Panoramas.

How’s life as a musician in Austin working out for you?
Well, we don’t have a manager, so most of my mornings are responding to e-mails — show offers and such. For the past three years, we were playing shows every other week. I had somebody say, “Don’t do that” But it helped us a lot in the beginning since nobody knew us. Everyone in the band has day jobs, and I don’t; I freelance. So my work depends on what’s available. I have a solid background in my field, and I will make it through the interview process, but when people google me, the band comes up. So it is really hard to find a job that allows flexibility for musicians. So I do what I can so I can invest my time in Moving Panoramas. Sometimes my life is a 12-hour day job at a TV show. Sometimes it is walking dogs. Sometimes its babysitting, or odd jobs at a venue. I am not going to lie: I made just $16,000 last year, and that’s OK. When I was working in TV, I was making four times that much. I’m not complaining that I’m not making money as a musician, I have been doing this for a long time, and I know it is not a lucrative field. When I decided to go with this wave and ride it, I knew what I was getting myself into. I’ve been in bands with musicians over and over again, and I’ve watched them collapse financially. It’s why I am working on a project to help musicians in Austin find employers willing to hire them and be flexible with touring musicians. For me, I knew it was a gamble, but I am riding that wave and trying to find balance so I can swim back out and ride it again. But I want to take other surfers with me, and I want to make sure we keep surfing.

What keeps you surfing like that?
I’ve spent half of my life doing this. There are a lot of things that have happened in my life where I am wiser, calmer, and at ease. Now is the time that I have stories to tell. If these stories are going to be heard at some point in my life, I am glad it is now. I have been telling stories all along, but the significance of being an older musician is huge. I feel like I have so much more wisdom to offer. It’s why I am so in love with the honky-tonk musicians who literally play until their last breath. And that’s why I love playing on tour with bands like Spiral Stairs, and with talented people that have being doing this a long time. Their bass player Matt Harris and I go way back. We played with Spiral Stairs at SXSW, and we talked about touring together. So we hooked up for the Texas portion. It’s wonderful because usually I am the one asking other bands if they need support on their tours, and they asked us. Touring is very hard, and Spiral Stairs is about to go to Europe. So it was awesome getting to support them in the Texas portion.

I know some of what you described earlier is rough, but it also sounds like you’re in a good place.
The one thing that I have learned throughout all of this, and it’s so true, was my grandmother’s dying wish: “Don’t sweat the small shit.” Don’t let stress, depression or anxiety bring you down and take you down in that dark place. Find something that makes you happy, and use that as your gateway. Music is that medium for me, and it has saved my life.

Head here to stay up on Moving Panoramas. The band’s 2015 debut LP, One, is available on iTunes.