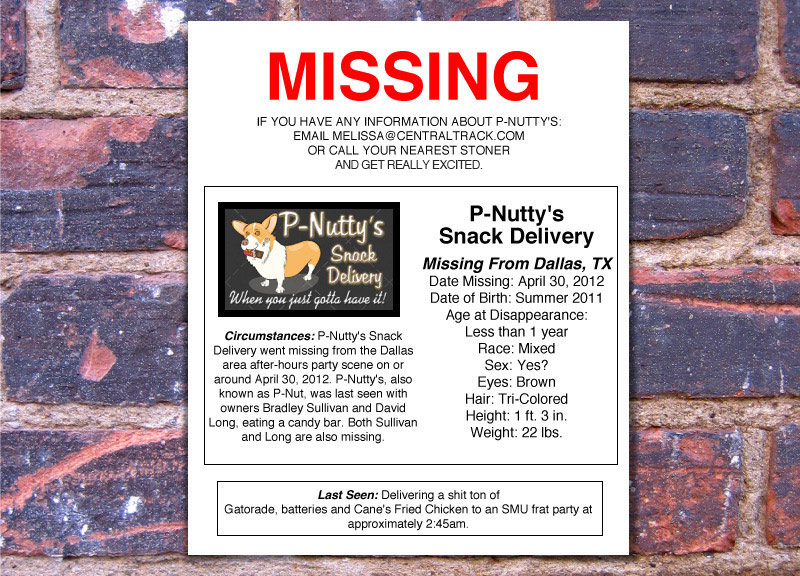 Where Has P-Nutty's Snack Delivery Gone?

Dallas, this is a real problem: P-Nutty's Snack Delivery has gone missing.

Disappeared. Vanished. Fallen off the face of the Earth.

Maybe you remember these guys — the two local dudes who were sitting around on their couch, neither of them wanting to get up and make the cigarette and snack run, so instead they just developed an entire company to do it for you. Kind of awesome, right?

For the past year, P-Nutty's would deliver just about anything to anywhere in Dallas until 4 a.m. — Red Bull, Diet Coke, batteries, tampons, condoms and pretty much anything else, so long as it wasn't illegal.

They were doing exactly what we wanted them to do. So what happened?

Upon visiting their site while in need of a late night Whataburger delivery a few weeks ago, we were hit with the shocking news: “We apologize to all of our customers and fans, but we have stopped doing deliveries. But we thank and appreciate you all!”

Their phone number? It's no longer in service. Their email address? It's null and void. Their Facebook page? It no longer exists. And their Twitter account? It too has vanished.

We've tried reaching out to P-Nutty's owners Bradley Sullivan and David Long through various social media outfits to find out what happened. Our efforts have yet to yield any results.

Gotta say, though, we're pretty disappointed to see P-Nutty's go. It was such a great idea, such an awesome service. I'm pretty sure us Dallasites were taking full advantage of it.

So, if we could say just one thing to P-Nutty's, I guess it would just be this: We miss you. We love you. If we made you feel neglected or unappreciated, we apologize. It was never our intent. Please come back. Things will be different this time. We promise.

You know where we are.