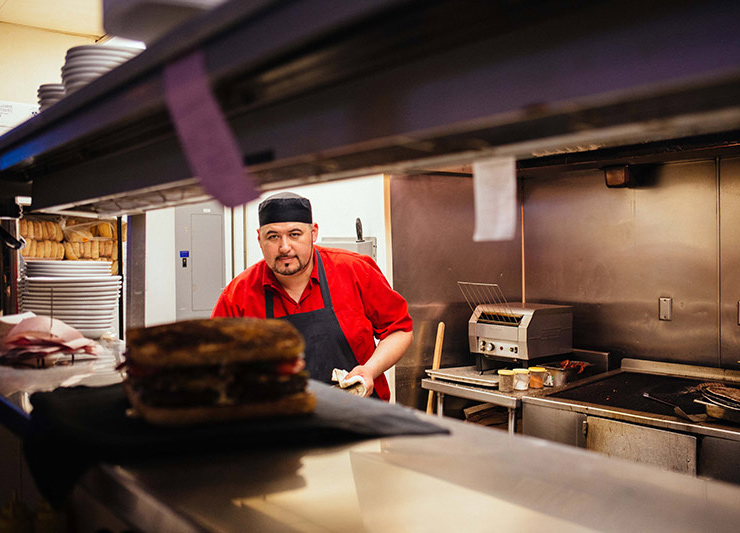 Deep in the northern recesses of Frisco, there exists a meaty monstrosity created with the sole purpose of destroying the digestive tracts of any diner that dreams of having a hastily taken photo of themselves placed onto a wall of victors.

The engineer behind this consumer of gluttonous souls? Kenny Bowers, a man renowned for the string of restaurants that bear his name.

The restaurant that plays host to dish? Kenny's Burger Joint.

The name of the dish? El Jefe Grande.

The Jefe is everything that strikes fear into the hearts of burger lovers. The sight of it alone could induce a pulmonary embolism. Even simply attempting to consume it is sure to bring on a sudden upshot in cholesterol that will take six months of dieting, exercise and a prescription to shed.

The seven pound burger — yes, seven pounds — consists of a gigantic beef patty drenched with a mixture of French fries, chili, queso, bacon and jalapenos. On top of that ridiculous, soon-to-be-a-soggy mess is lettuce, onions and tomatoes. The whole sloppy concoction is “contained” between two gigantic slices of Texas toast, each about 14 inches across and lathered with a cup of mayonnaise. Yes, a cup.

I hope you enjoy copious amounts of mayo.

The burger is then served with a sizable steak knife stuck vertically into it (so that the challenger can carve it up into more manageable bites) and it arrives at the dining table on what appears to be a massive spatula.

Also? It may be the one burger in town that requires you to sign a waiver before you can eat it. Y'know, just in case you die choking on this thing.

Allegedly, the whole burger comes in at around 7,000 calories. So it's best to have a solid four days of intense exercising at the ready if you want to work this beast off.

Obviously, no normal group of diners looking for a simple burger would order this. And, luckily, it wasn't created for that purpose.

The Jefe is very much a tourist attraction. It's a competition burger — a meal meant to generate interest more than sales.

And, so, it follows the same rules as many other dining challenges: If you finish the dish in one hour, the $50 burger is on the house. You also get a T-shirt, a photo of you on a wall and a $100 gift card to Kenny's.

If you fail, you pay up.

Doesn't sound worth the trouble? Well, somehow, in the three years since Kenny's Burger Joint opened, 151 people have attempted to eat this gastrointestinal-mutilating hamburger. Of those 151, three have succeeded.

The most recent conquistador of the El Jefe? University of Missouri student Ramsey Hilton, who, much like his fellow champions, looks in his picture to be something of a skinny fella. Further proof, perhaps, that skinny people can achieve singularity in their stomachs.

Perhaps the most surprising thing about this frankenburger, though, is that it actually tastes pretty good once you get past the shame of eating it.

Which brings up a whole slew of other questions. Fortunately, Kenny Bowers himself was willing to defend to us his epic destroyer of souls.

OK, first thing's first. What made you want to put Kenny's Burger Joint all the way out here in Frisco?
Frisco is obviously a great community, and it's growing. We had an opportunity. The landlords called and there was a restaurant that had closed. We came and looked at the location, and we thought it would be perfect to put a burger joint. We had been looking at Frisco anyways because there are a lot of families and a lot of people my age that could identify with some of the humor that my business partners and I brought here.

Why put something as huge and as daunting as the El Jefe on the menu?
I'm a big Adam Richman fan, no secret there. I wanted to do something fun that was a legitimate challenge. And we weren't sure what we were going to do. We thought, “Oh, should we make a giant nacho or a giant cheese fry or whatever?” Then we started kicking around ideas about a giant burger. We thought about how we could make it Texas. So that's where the name El Jefe Grande came, which means “the big boss.” So we decided we were going to put chili on the burger — and queso and jalapenos to sort of Tex-ify it. It was something fun that people could come in and talk about. But it wasn't easy. It's a big deal. And it really kind of took on a life of its own.

Despite its size, what separates the Jefe from other burgers on your menu?
Well, La Spiga Bakery bakes all of our buns. They make this giant Texas toast, which is sourdough Texas toast, and they make that special for us. The meat for the burger is about three and a half pounds, and what we do is we cook that on our flat grill instead of our wood grill. We kind of sear it, and it keeps it from falling apart. And all the ingredients — from the fries, the cheese, the queso, the chili, y'know all of it — kind of comes together. Even though it's a big giant burger challenge, it actually tastes good together.

When was the challenge first beaten?
I would say roughly two and a half years ago. It's kind of come out to about one person per 50 people.

Whichever you eat better in.
I think, if I was lit, if I went to the dark side, I could maybe do it. It's possible. I wonder if we could set a movie camera up in my house. I couldn't do it with a lot of people around. I've got to have the quiet in my house, in my comfortable environment. Man, we could probably get a lot of press off of that! 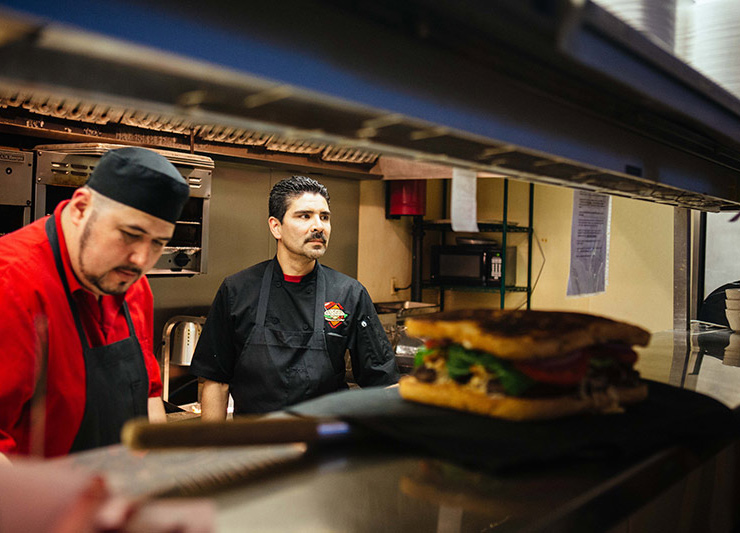 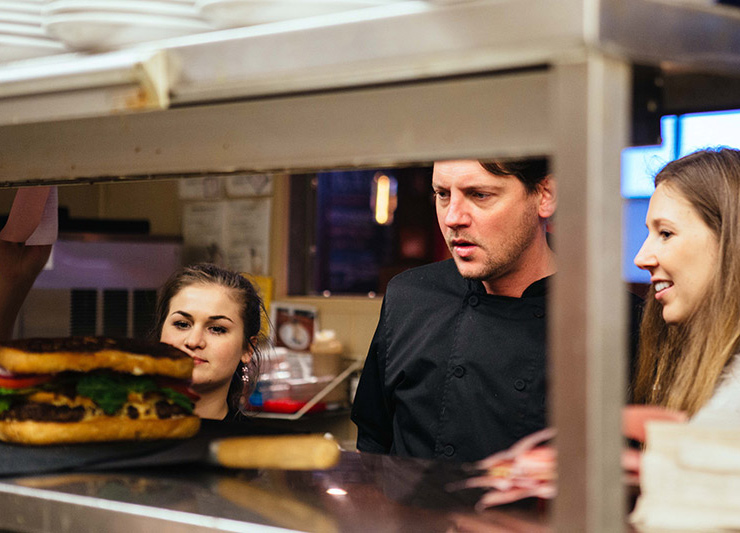 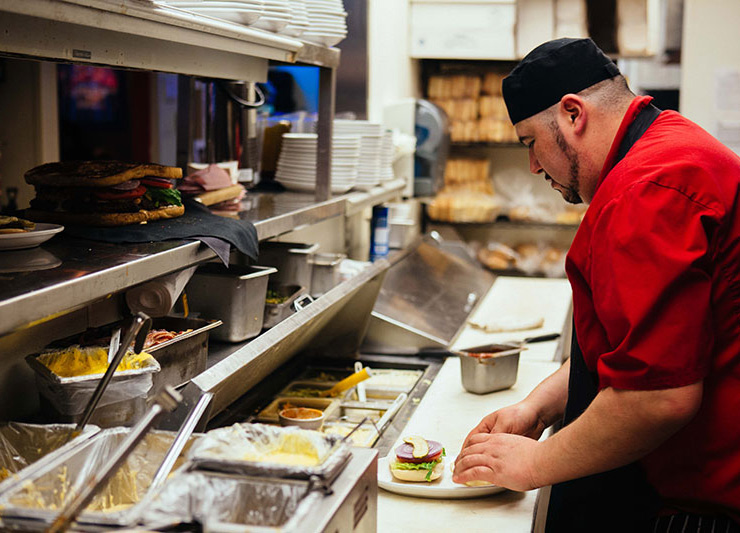 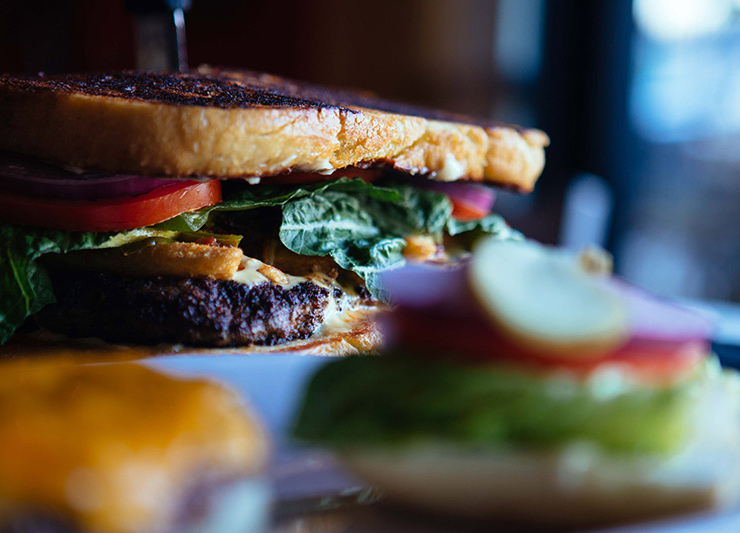 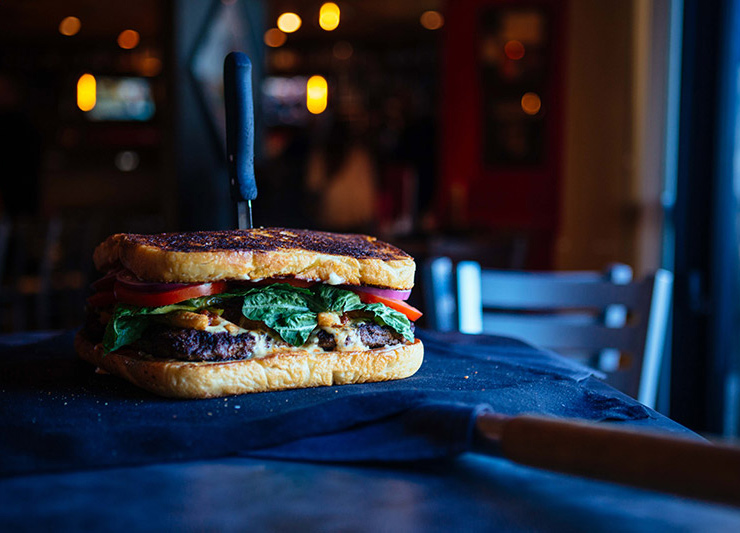 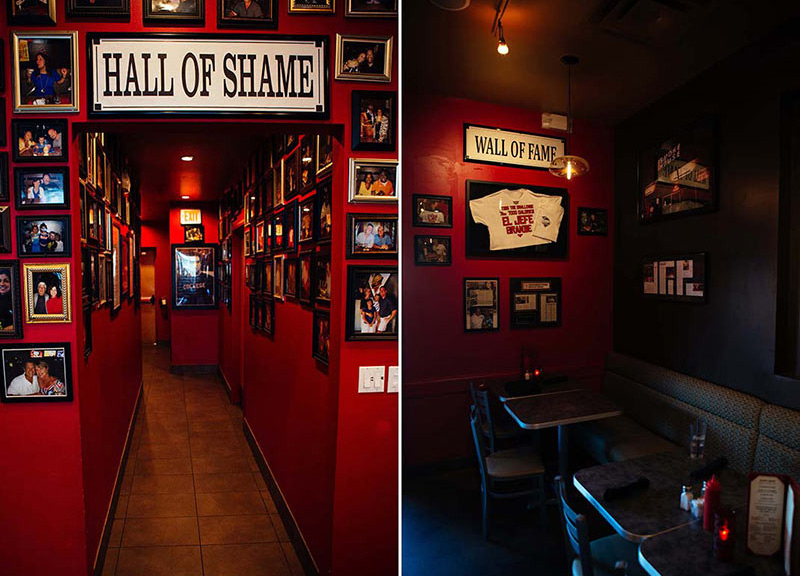 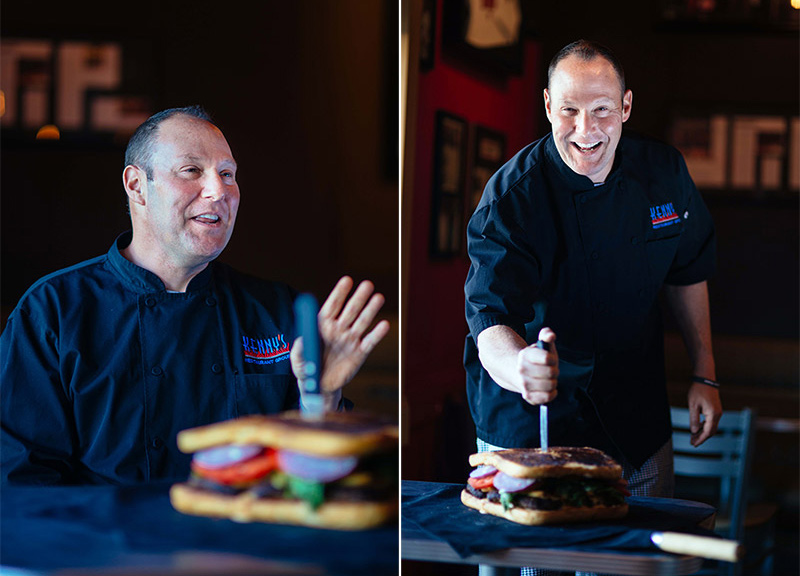 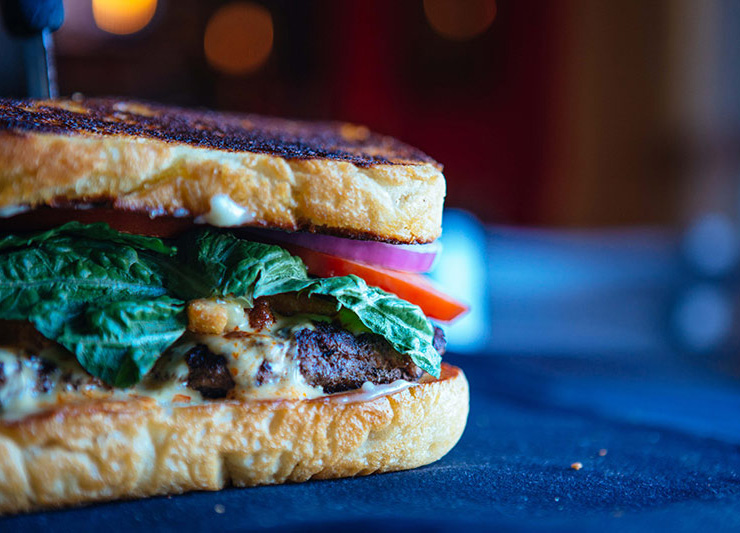 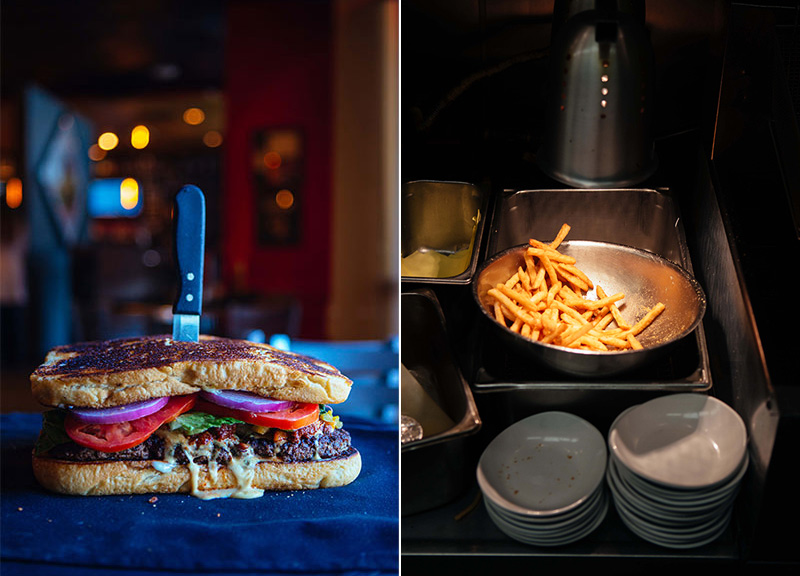 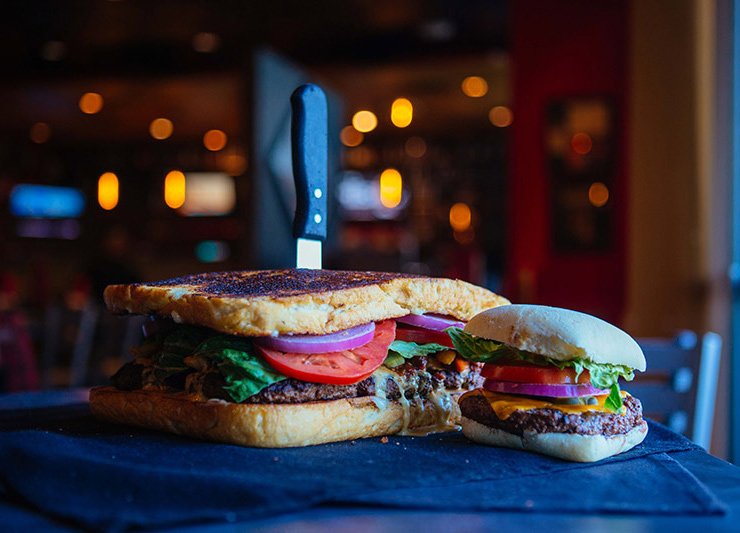 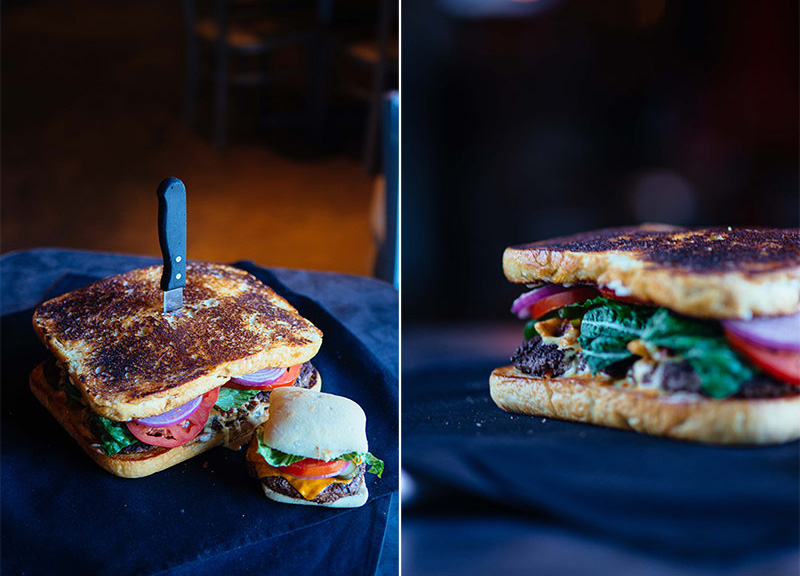 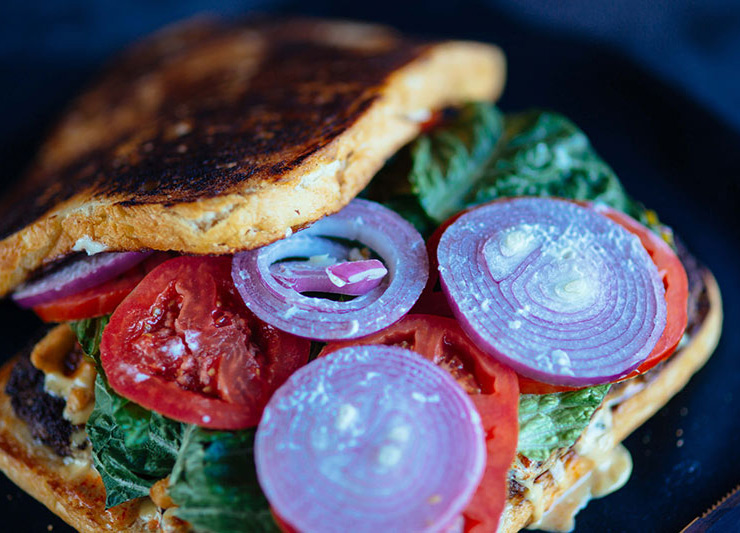