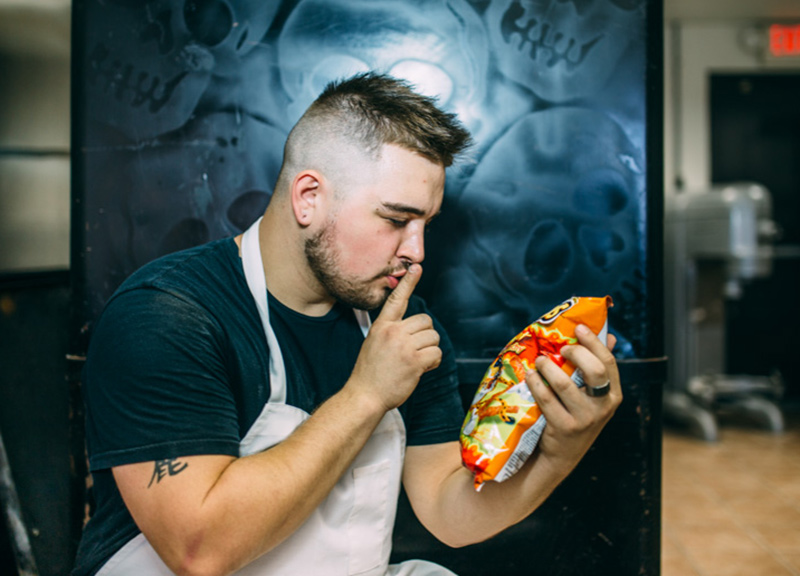 Hot Cheetos On A Pizza? Yes, The Team Behind Pizzariachi Came Up With That One While Blazed. Really.

Nestled in the southern reaches of Farmers Branch, just past Walnut Lane, a simple building rests inside of a painted-white iron security fence. The only indication as to what this little business does is denoted by a luminescent, sans-serif sign above the entrance: “Pizza,” it beckons its would-be customers.

Out on the fence, there actual is an honest-to-goodness sign hanging and denoting that this place does have a real name — it's called Pizzariachi — but it's easy to miss, and if you're driving around looking for this place in particular, you may end up circling the block a few times, silently cursing yourself.

Inside, the place's identity is further revealed: It's a grab-and-go pizza shop, and though David Turner, the owner and main man in the kitchen, says the outside seating area can get crowded at times, the interior is just plain tiny.

Still it's got spunk: Painted around the take-out window is a massive, character donning a sombrero, with his mouth stretched out to inhuman proportions so as to fit the entire size of the window within it. Why a sombrero? Pizzariachi is supposed to be some sort of mixture of pizza and mariachi, which, we admit, makes very little sense.

Well, not until you see how Turner makes his pizzas. There's a definite flair to his process. And there's style, too: His crust lies somewhere between the crunchiness of a Neapolitan and the inner-softness of a New York style slice. But that's pretty much the only normal thing about this place: Instead of a tomato sauce base, Turner uses a corn-base sauce resembling creamed corn. From there, he'll top that sucker with some cheese and a variety of wild ingredient options. Chorizo? Pineapple? A whole egg? No problem here at Pizzariachi.

But the topping that most piqued our interest? Hot Cheetos.

We know: It sounds gross. Corn sauce, some cheese and then a half-bag of Hot Cheetos thrown on top? If you're not drunk or stoned, you wouldn't give this thing a second glance.

We did the unthinkable, though. We ate it. While sober. And y'know what? It was actually pretty darn good!

It's not necessarily that the Cheetos elevate the pizza to some new height, however. In fact, the only thing the Cheetos really offer is a nice, air-puff crunch to compliment the dough. The real all-star of the pizza is the special sauce that Turner drizzles over the top of this pie. It's a mixture of mayo and Valentina hot sauce and it's spectacularly unexpected on a pizza, packing enough of a kick to override that horrendous Hot Cheetos flavor and providing a nice creaminess, too.

You've have this sauce before, probably. Essentially, it's the same sauce used as a dressing in elotes. And now that it's been added to the pizza thanks to the clever special-state-of-mind thinking of Turner, we're kind of having a hard time imagining a pizza without it.

S, naturally, we caught up with Turner and asked him how the hell he came up with this stuff.

What are the specific ingredients to this pizza?
It has as cross between a Neapolitan- and New York_style crust — slightly crispy with a soft interior. We have a roasted corn sauce as the base, which is basically roasted corn pureed with a couple of seasonings we have in house. We have a low-moisture mozzarella cheese and then, on top of that, we finish with crushed Hot Cheetos. Then we drizzle a mix of lime, mayonnaise, Valentina and a couple of other choice ingredients.

Where did you get the idea for the Hot Cheetos pizza?
We bought the place before we even knew what we were making. We got the restaurant and we were like, “Man, we can't just sell pizza! We're going to get wrecked!” My father-in-law suggested that he always wanted a pizza with chorizo and elotes on it, and I said, “Well, fuck it!” And we just tried it out one day during our recipe runs. I thought, “Man, Mexican pizzas: We can probably do some cool stuff with that.” Then it kicked off. And we got high one night and made a Hot Cheetos on top of elotes. When we smoked, we used to get the Hot Cheetos with the corn and shit and we'd just put that on the pizza. All the other recipes are pretty well thought-out. This one is pretty much a fluke.

Does it sell well?
It's one of our top sellers!

What demographic buys it the most? Just red-eyed stoners?
That's the odd part: A wide range of people buy it! But I'd still say the target market is the younger crowd. A lot of drunk people. Definitely stoners. Stoners will come in and chill on the couch, take a walk around the block and come back and eat some pizza. 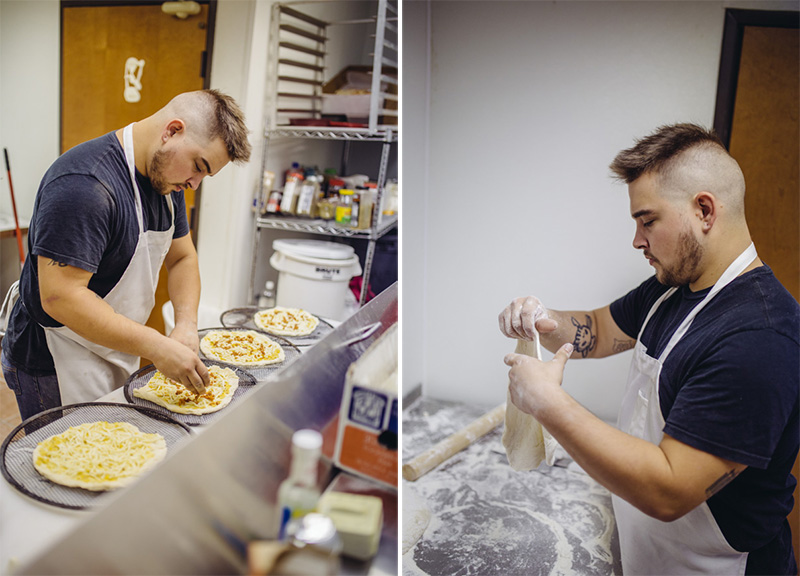 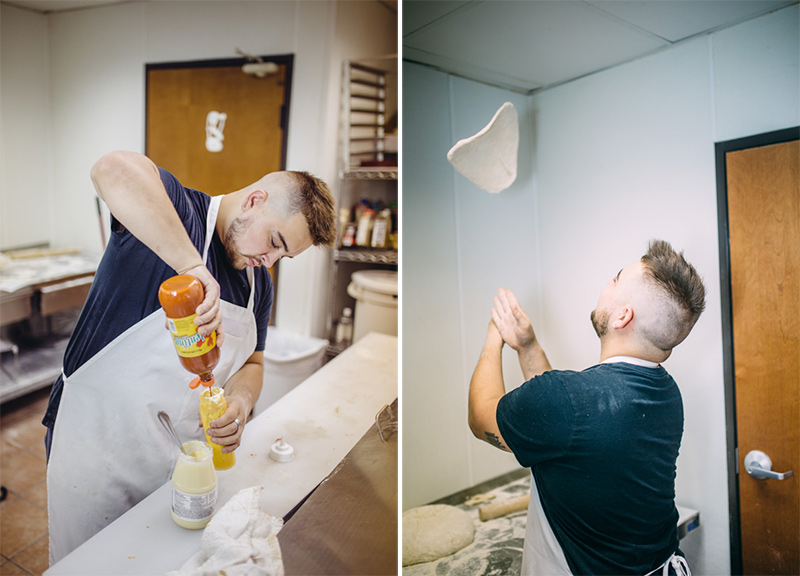 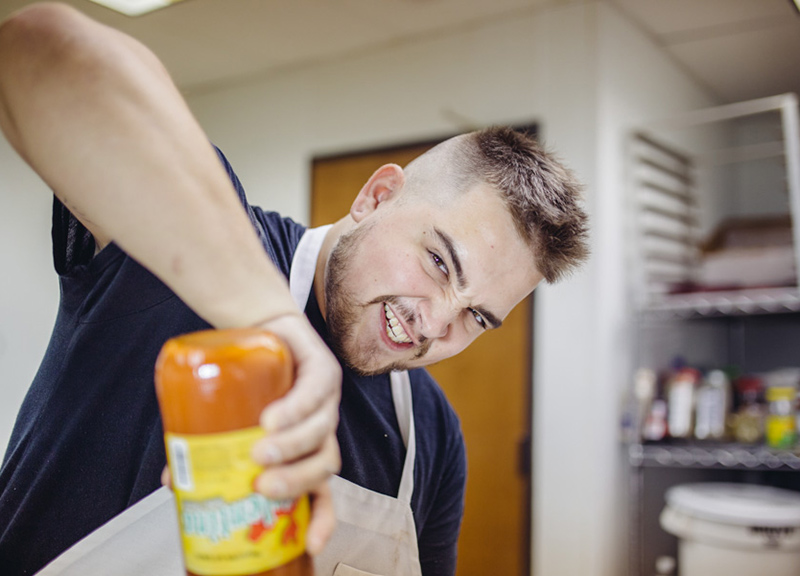 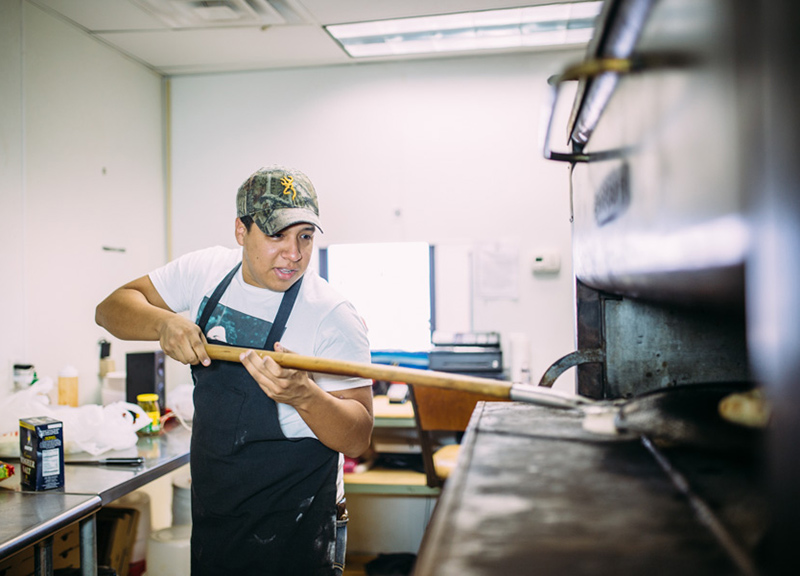 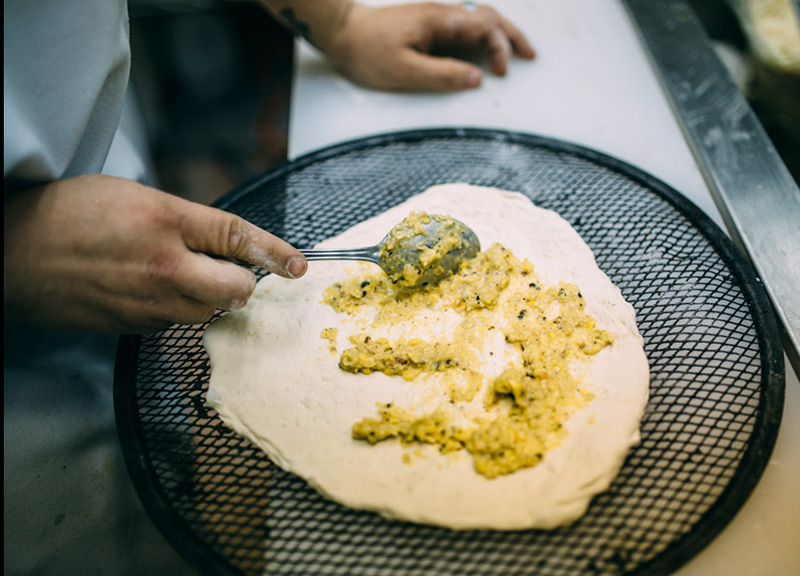 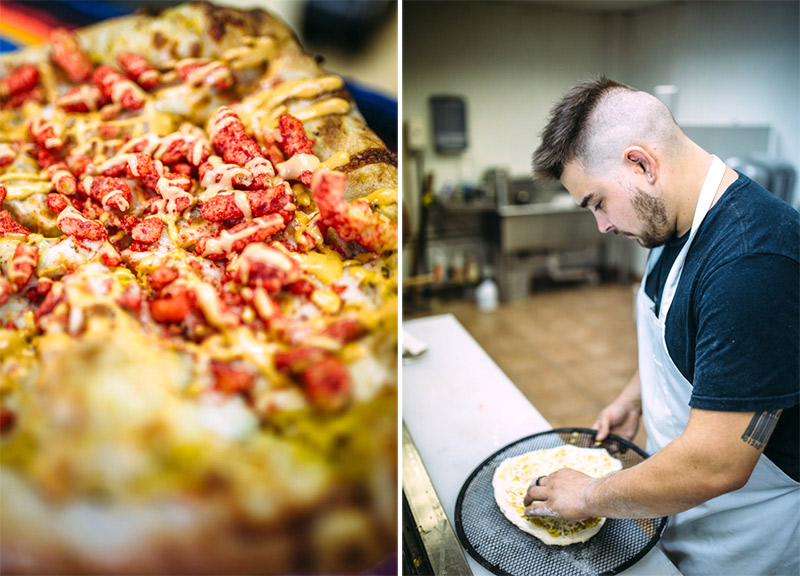 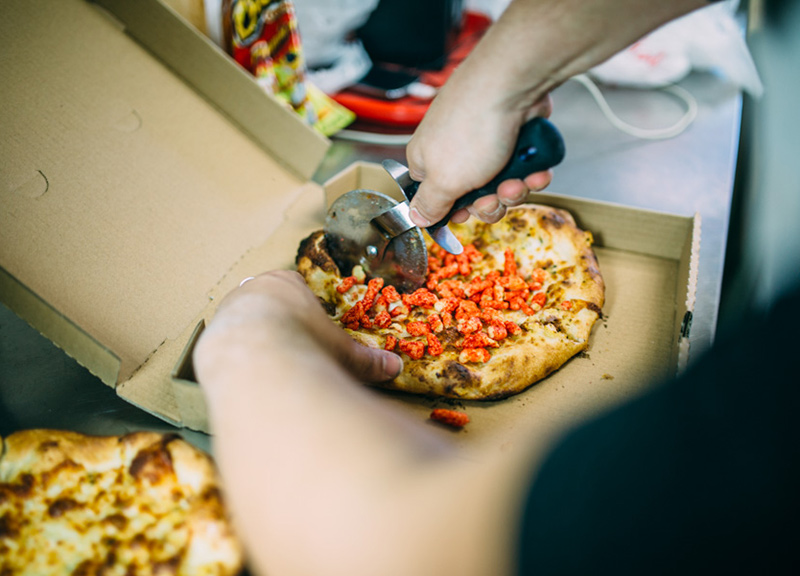 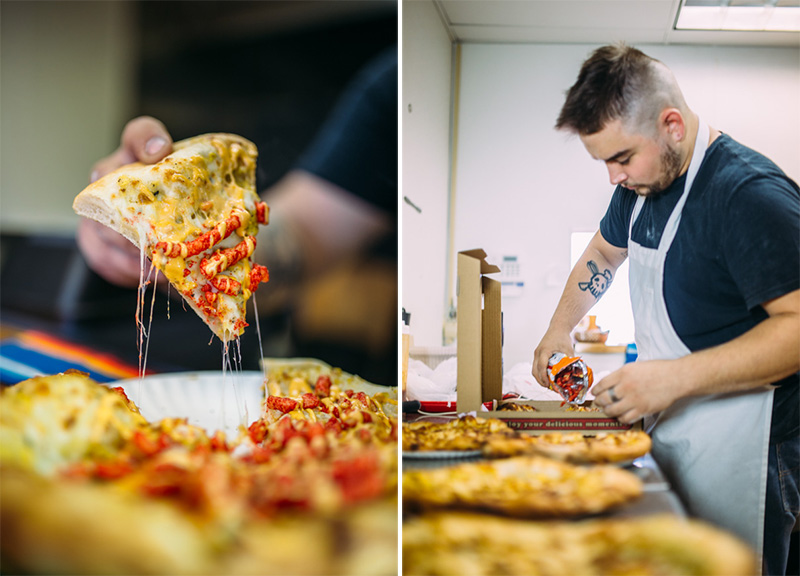 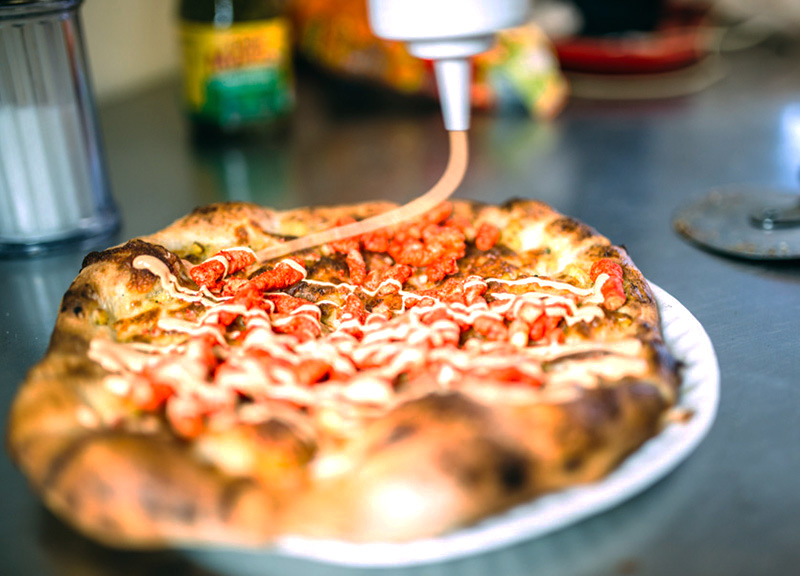 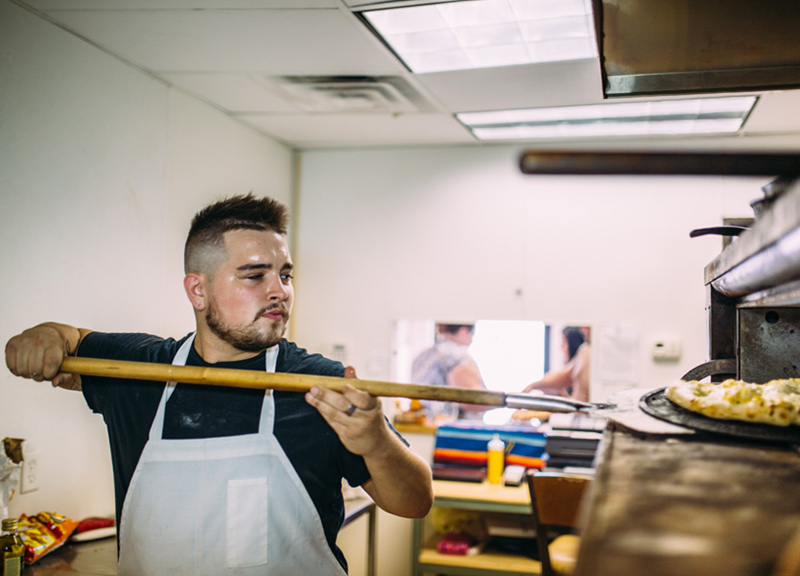 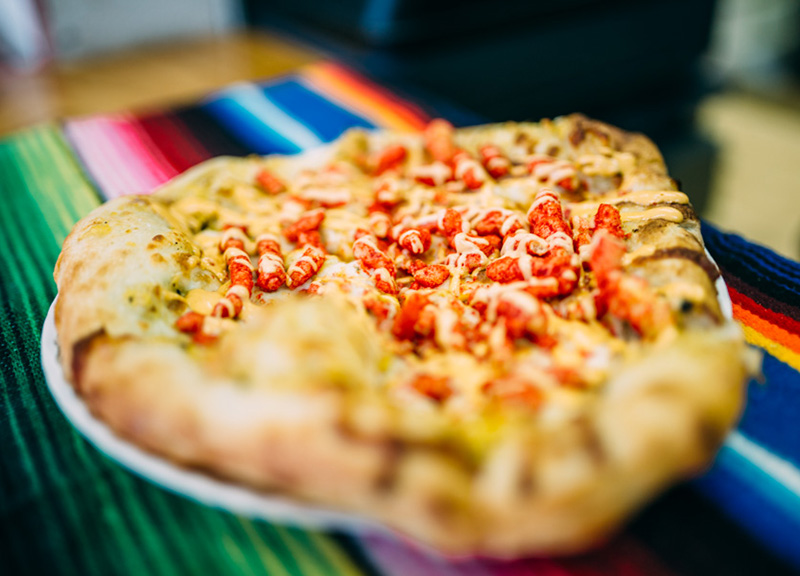 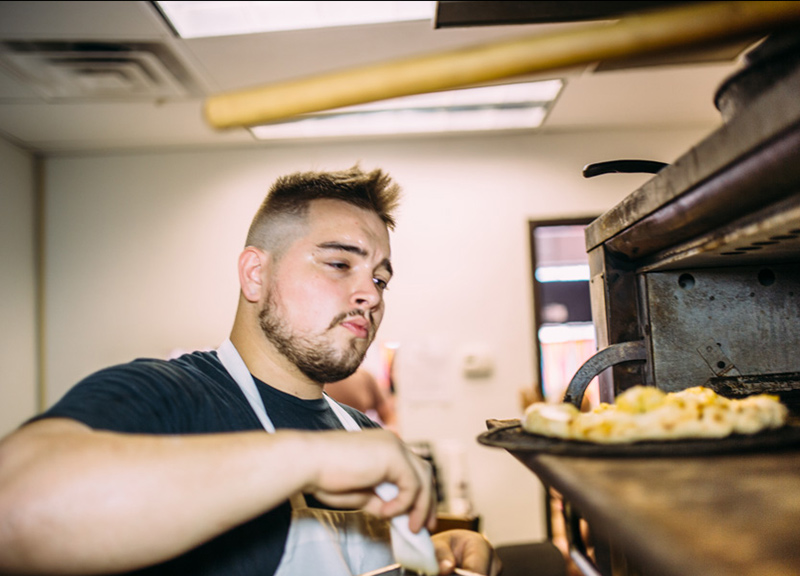 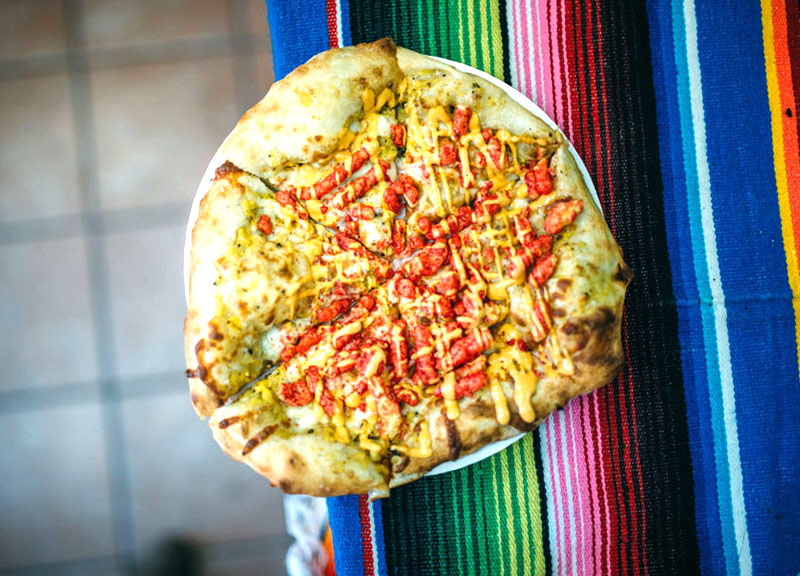