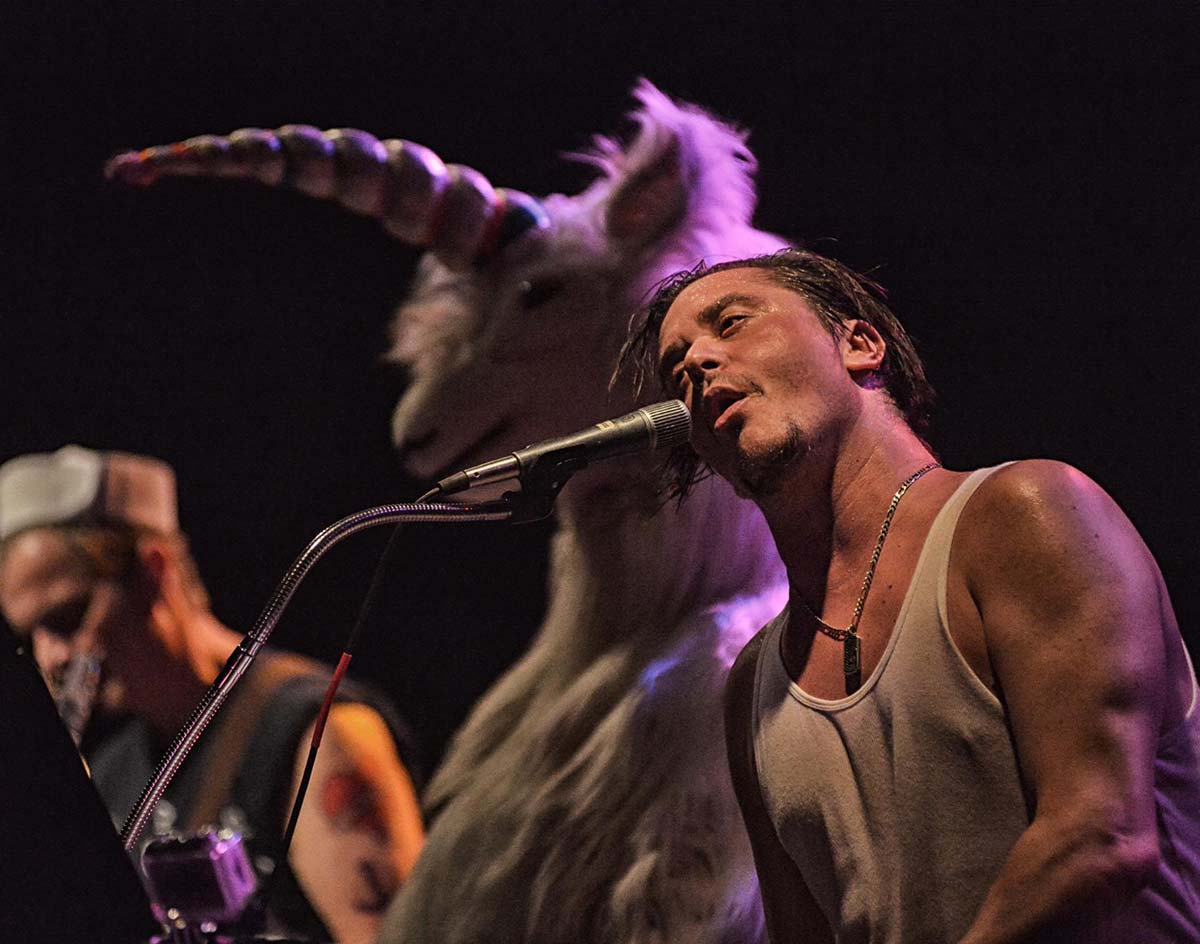 At a February 11 concert in Brooklyn, Mr. Bungle’s set took an interesting turn as fans threw their late friend’s ashes on the stage, according to a MetalSucks report. The remains of those fans’ friend, Dakota Young, were wrapped in a pair of his underwear — and, as they hit the stage, they exploded into a cloud of dust.

There has been not yet been any comment from members or representatives of the band on the matter, but something tells us at least part of them felt honored to play this important a role in Young’s life. And, not that we take pleasure in reminding you of your own mortality, but you too will one day need to pay a visit to a notary public, and when the time comes for you to get your will notarized, you’ll need to determine what happens to your remains, too.

If Young’s story gives you any ideas as to how your remains will be dished out, just promise us that you will do your best to live a long, healthy life.

To that point, if you make it out to any of these freshly-announced concerts, please promise us that you won’t do so while being carried in an urn.

John Cusack
Friday, April 10, at Majestic Theatre
On sale Friday, February 21, at 10 a.m.
This year marks the 20th anniversary of the rom-com High Fidelity, in which John Cusack starred alongside names like Jack Black and Lisa Bonet. Whereas Hulu has decided to reboot the franchise into a TV series, Cusack is taking his film adaptation of Nick Hornby’s book on the road, and each screening will be followed by a Q&A session with the man himself.

Purity Ring
Friday, May 8, at Bomb Factory
On sale Friday, February 21, at 10 a.m.
The Canadian synth-pop duo Purity Ring has announced the upcoming release of its third full-length, WOMB, which comes almost a whole decade after the band’s critically-acclaimed debut Shrines.

Primus
Tuesday, May 26, at Toyota Music Factory
On sale Friday, February 21, at 10 a.m.
This particular tour is rather unusual compared to the headline runs we have grown accustomed to. For one, Les Claypool and Co. will be playing Rush’s album A Farewell to Kings in its entirety to pay tribute to the late Neil Peart. Also, there are more heavy hitters this time around than usual, as Wolfmother and The Sword open.

Jessie Reyez
Tuesday, May 26, at House of Blues
On sale Friday, February 21, at 10 a.m.
Jessie Reyez kicked off 2020 as a Grammy-nominated artist in the dogwhistle category of Best Urban Contemporary Album. She is now gearing up for the release of her debut LP Before Love Came to Kill Us.

Landfest
Saturday, May 30, and Sunday, May 31, at the Theatre at Grand Prairie
On sale Friday, February 21 at 10 a.m.
As boring as its name is, this twofer is actually quite stacked. Saturday’s billing consists of Nitty Gritty Dirt Band, Ricky Skaggs, Jerry Jeff Walker and Bradley Walker, while Sunday’s completely blows its counterpart out of the water with Alison-goddamned-Krauss, Steve Earle, Yonder Mountain String Band and Jake Hoot.

Burna Boy
Sunday, June 7, at South Side Ballroom
On sale Friday, February 21, at 10 a.m.
The Nigerian dancehall and afro-fusion artist has collaborated with Fall Out Boy, Jorja Smith, Future, Damian Marley, YG and Jeremih. And those features are just from his fourth studio album African Giant.

Braids
Wednesday, June 24, at Ruins
On sale Thursday, February 20, at 10 a.m.
This Canadian art rock outfit is not to be confused with the emo band Braid or the indie pop duo, Broods. Listen, this is why you don’t give your band a boring, forgettable name, OK?

Marcella Arguello
Thursday, June 25, at Sons of Hermann Hall
On sale now.
Comedian Marcella Arguello has a reputation for taking on hecklers which, in turn, has given her more hecklers. But, like, in a good way.

Stephen Malkmus
Tuesday, July 7, at Granada Theater
On sale Friday, February 21, at 10 a.m.
The Pavement guitarist and former Silver Jews member has been in the studio sans his backing band The Jicks for his upcoming sophomore solo release Traditional Techniques. He released the album’s promotional single, “Xian Man,” back in late January.

Rascal Flatts
Saturday, July 18, at Dickies Arena
On sale Friday, February 21 at 10 a.m.
In the latest “Jesus, I didn’t think anyone cared this much about them” news: Rascal Flatts’ farewell tour has announced a third North Texas stop, as the other two stops at Winstar and Dos Equis Pavilion have been going gangbusters in the sales department. Gene Simmons, if you’re reading this, this is how you do a farewell tour.

Korn + Faith No More
Friday, August 21, at Dos Equis Pavilion
On sale Friday, February 21 at 10 a.m.
Former Ozzfest favorite Korn will take part in an unexpected, but welcome co-headlining tour with metal legends Faith No More. We’re sadly missing out on the leg with Helmet, but Daron Malakian of System of a Down will open along with “blackgaze” band Spotlights –so, hey, that’s nice.

Parkway Drive
Thursday, September 17, at Toyota Music Factory
On sale Friday, February 21, at 10 a.m.
Knocked Loose, Hatebreed and Fit For a King open this show, and while we’re on the subject, how come Hatebreed is billed so low, huh? The band is easily one of the most commercially successful metalcore outfits of all time. Without Hatebreed, Parkway Drive and Knocked Loose would probably not even exist.

Front 242
Friday, October 2, at Canton Hall
On sale now.
If you missed Front 242’s show at Granada back in September 2017, fate has presented you a mulligan.

Cover photo of Faith No More’s Mike Patton and the lamented Goaticorn by Mike Brooks.