The Legend of The Goaticorn. 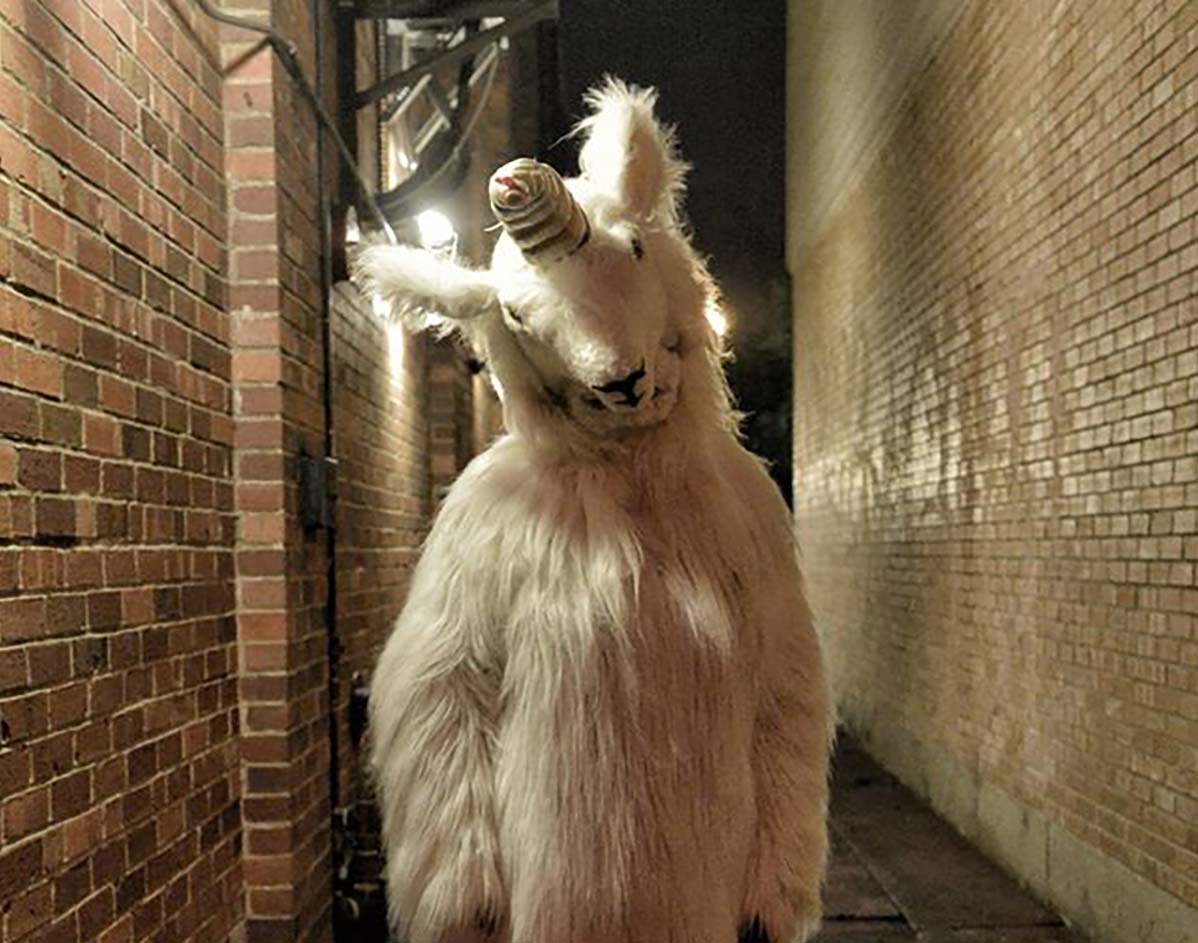 An Anonymous, Costumed Music Fan Is Taking Over Our City.

On Halloween night, a magical thing happened at the Granada Theater.

As part of the venue’s costume contest, which went down in conjunction with the venue’s hosting of a performance from Mike Patton’s Tomahawk outfit, a young woman showed up wearing something more than a costume. She was wearing what would soon become a legend.

It was, as it would later be deemed by the Granada Theater staff, a “Goaticorn” costume. And, immediately, this mythical beast was embraced by everyone who saw it.

She was lauded on the Granada Theater’s Twitter wall. She was invited to join Patton and his bandmates on stage during their performance. She posed for pictures with the band, too. And, not at all surprisingly, she won that night’s costume contest.

But the story doesn’t end there. All month long, the Goaticorn has been making surprise appearances around town alongside the Granada Theater staff. She showed at D Magazine‘s Election Night party at the venue. She joined the staff on stage at the House of Blues when the venue accepted its Dallas Observer Music Award for Best Venue.

And, as both the theater staff and the woman in the costume promise, she will be appearing many, many times again in the future if all goes according to plan.

Recently, after some Facebook sleuthing, we were able to determine the identity of the woman in the costume. And, after agreeing to her requests that we keep her identity a secret, we spoke with her about the genesis of her creation, her surprise at the citywide embracing of the Goaticorn and her plans for keeping the Goaticorn alive in the future.

First of all: You are the Goaticorn, yes?
Yep. I’m ambivalent about my real name being used though. Although it’s not a total secret, I do enjoy the anonymity.

Do you own the costume? Please tell me you do and that you don’t rent it.
I did rent it — something I get to kick myself in the arse for on a daily basis now, especially since I am a sculptor! But, being a professor, Halloween is always one of the busiest times of the year for me and, for many years, I would run out of time trying to make a costume and end up miserable and costumeless. I started renting a few years ago, and now Halloweens are a blast again. Of course, if I’d known what would happen this year…

I will somehow remedy this and have me my own Goaticorn suit soon. Hitch No. 1 there: The rental place has yet to be convinced to sell it to me. Hitch No. 2: If I can convince them, it sounds like it will be way beyond my price range, or rather, price-universe.

But I saw recently that the Granada is now making Goaticorn T-shirts to help me buy the suit! They’re so awesome. If all else fails, I’ll make my own Goaticorn this winter break.

And if I end up living in a wonderful world filled with Goaticorn doppelgangers, I mean, how bad can that be?

OK, so how’d this all come about? First time I heard about you was your appearance at the Tomahawk show at the Granada on Halloween. Our photographer caught you on camera a couple of times. Was it just your costume for the night? Did you ever anticipate being invited on stage? What was that like when that happened? Were you able to meet the guys in Tomahawk at all? It seemed like they were into you!
I had rented the suit to wear to my art classes on Halloween. I thought it would be funny to wear it to Tomahawk but figured it was a stupid idea. I was sure the crowd would rip off my head and beat me with it. But my friend Kacey told me I was underestimating the awesomeness of the Goaticorn. So I took it along anyway and when we got in the parking lot, I decided “To hell with it!” My boyfriend saw what I was putting on and, referring more to potential mosh-pits than musicians, said, “Baby, you can’t wear that tonight! Metal kills unicorns.”

But, as soon as I got the head on and started walking past the tour bus toward the venue, the Tomahawk band and crew started pouring out of the bus, laughing and in awe and asking to get a picture! It was awesome and they were extremely polite and friendly.

The audience was also unbelievable that night. I got about a hundred hugs and hundreds of photos with everyone, and was christened “The Goaticorn” by Granada’s big Twitter screen.

When Tomahawk sent someone to ask me to come onstage, I said I would but warned him that I couldn’t dance. He said, “That’s OK, you just have to dance around some on the front of the stage.” When I got up there, Mike Patton showed me quickly what he wanted me to do, but in addition to being born with a dance deficiency, I couldn’t see or hear half of what he said in that suit. I could barely move without stumbling on stuff!

So that was pretty funny.

After the song and after he hugged me, he grabbed me and I’m almost sure he said, “You really need to learn to dance!”

It was pretty much the most awesome moment ever.

Were you surprised when the Granada team took such a shining to you? How’d it come to be that you were asked to join them at the Dallas Observer Music Awards?
After the Tomahawk concert, Chris McDonald from the Granada contacted me about the free tickets I’d won and we were still in touch about that. Then I noticed their post on the Granada Facebook page pleading with me to come to the election party! I still had my costume, so I went.

It was a very different crowd — all photos, very few hugs — but was still a lot of fun. Same story with the DOMAs.

I really love being their mascot. It’s always been one of my favorite venues. They’re a fun group, and have been so sweet to me!

What is a Goaticorn? What are its powers? What is its message?
Goaticorn is just a delight in randomness.

How does your real-life personality compare or differ to that of the costumed you?
As far as I can tell, we’re the same — shy, aloof, super-nice, ironic and playful. It’s especially funny for me to see videos of The Goaticorn because there’s so much going on around me to which I’m oblivious. People ask me things I don’t hear, pose for pictures sometimes without me knowing and even hug me without me really being sure what just happened.

For a shy girl, it’s a nice little cocoon.

Why do this?
Because now I see how much I was underestimating the awesomeness of the Goaticorn. It has the power to inspire so many reactions. When I was a kid, I imagined a flying unicorn would pick me up in front of the school and take me to a fantasy land in the clouds, transcending all my little-kid predicaments and anxieties.

I like being able to share that memory with strangers just by appearing somewhere unexpected and reminding them of a time when fantasy ruled their minds.

But that’s not the only thing the Goaticorn communicates, and I enjoy its polysemy as well. Some people find it hilariously random and absurd, and I have fun laughing at myself with them. Some people are horrified, and I like giving people a fluffy monster to fear.

No matter how they react, it takes them out of their own head for a moment and makes them contemplate something they’re not used to having to contemplate.

Where can we see the Goaticorn next?
The Granada, of course! When? We’ll see when I can buy that suit!