How The Round-Up Became A Dallas Favorite Of Celebrities. 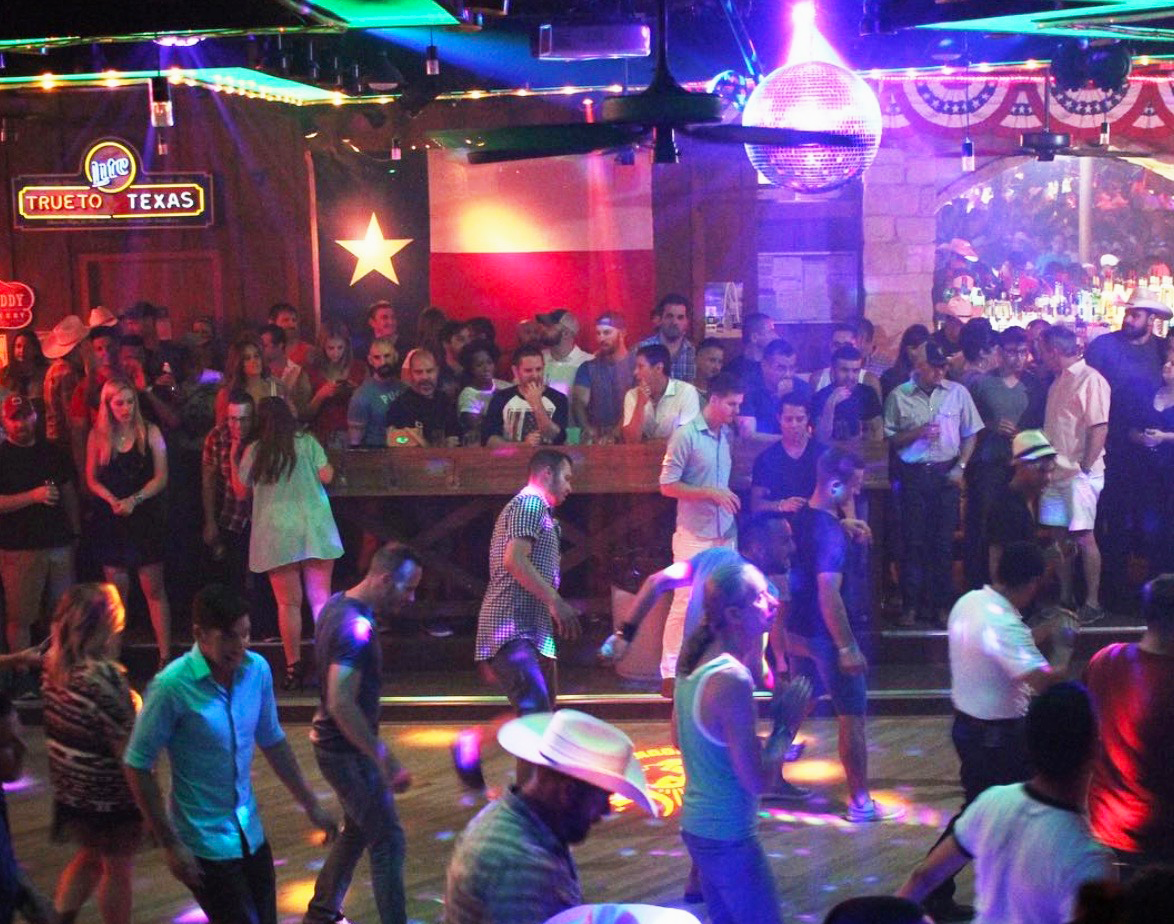 The Round-Up Has Become A Premier Destination Spot For Both Dallasites And Visiting Public Figures, Including Lady Gaga, Robyn And Even Willie Nelson.

You never know what you’re in for on a Tuesday night at the Round-Up Saloon in Oak Lawn. You might find a few folks throwing it back on the large hardwood dance floor, or even a couple dozen spectators with single dollar bills ready for a weekly drag show.

You might just as easily find an international pop star.

Such was the case when, just recently, synth-pop queen Robyn — known for bittersweet songs like “Dancing on My Own” and “Call Your Girlfriend” — dropped by the bar after the Dallas leg of her “Honey” Tour at Toyota Music Factory. The Swedish hitmaker wanted to celebrate the end of her tour by putting on a free DJ set, and she knew The Round-Up was exactly where she wanted to step into the booth.

Seeing Robyn’s head bob back and forth from the sweaty, overflowing dance floor felt like time-traveling back to a half-remembered ’90s club kid fantasia. Even as exciting as it was to watch a figure beloved by the queer community mingle with her dedicated audience, it’s not an uncommon sight at the Round-Up.

Over the past decade particularly, several other pop musicians with large LGBTQ fan-bases have either performed at the Round-Up after their Dallas gigs, just hung out there as an unofficial afterparty of sorts.

The most famous example is far and away Lady Gaga, who has been known to perform there after multiple of her Dallas dates. The club’s co-owner, Alan Pierce, vividly remembers the first time she strutted onto the bar’s dance floor in 2008.

“[Gaga’s team] called about a young singer who would like to perform at a gay club… I had never heard of Lady Gaga,” Pierce says. “But, turns out some of the customers on the street had heard of her or read of her, because the crowd the night she came in the first time showed up from across the street. Younger kids — mostly millennials.”

Many of the big-names who have ducked into the bar when in Dallas have also become familiar faces, including Gaga.

“She came back three or four times all together,” Pierce says. “She even walked in one time unannounced and said ‘I brought my dancers, we’re gonna’ perform on your dance floor,’ and they did ‘Born This Way.’ Full dance team. Rolling Stone was here and photographed her on our dance floor. You can’t buy that kind of advertising.”

More recently, alt-pop purveyor Charli XCX swung by the Round-Up after her performance at the House of Blues in September. It wasn’t some shallow attempt to seem accessible in ways that many of her contemporaries aren’t, either. In between selfies with fans, the British singer-songwriter indulged in a little bit of Karaoke, resulting in probably the only tolerable version of Hoobastank’s “The Reason.”

Just two weeks later, burgeoning genderqueer pop artist King Princess would hang out at the Round-Up after her own House of Blues show before tweeting, “I love Dallas. Roundup is my SPOT. Those Jell-O shots is dinner.”

I love Dallas. Roundup is my SPOT. Those Jell-O shots is dinner.

It’s not just pop stars who flock to the Round-Up, however. Pierce says plenty of actors have dropped in; From Harry Potter’s Emma Watson to Jesse Tyler Ferguson, known from ABC’s Modern Family, it’s nearly a celebrity run-in lottery.

Noteworthy local figures such as The Real Housewives of Dallas also have a history of frequenting the spot, but the less said about their relation to the bar, the better.

“The Dallas Summer Musicals… we always have groups from [touring] musicals that come in and do Broadway Cares fundraisers,” Pierce says. “Cathy Rigby [came] a few years ago [when] she was doing Cat in the Hat.”

Leslie Jordan, the character actor best known for his role in Will & Grace, is a regular as well.

“He was just here two or three weeks ago,” Pierce says. “He’s a funny, funny man. He told a lot of stories locally about his drinking days when he used to get in a lot of trouble, talked about getting thrown out of the Round-Up and he laughs about it now.”

In a fitting move for a western-themed bar, several big-names in country music have also shown the venue love over the years.

Texas country legend Willie Nelson enlisted the Round-Up to help him shoot a video for the delightfully-titled song, “Cowboys Are Secretly, Frequently Fond Of Each Other.”

“He wasn’t here personally, but the dancers were here for several weeks rehearsing and filming it,” Pierce recalls. “Then he took the dancers to his ranch in Central Texas and filmed the rest of it there. They used our local dancers. We play it occasionally on the dance floor.”

The Round-Up also turned out to be a hotspot for a then-upcoming country singer working his way out of the closet named Ty Herndon.

“When Ty Herndon was just young and starting out, he was not out in those days,” Pierce says. “He used to come to the Round-Up a lot. We’d kinda joke because sometimes he’d come incognito. And he’s been back and we’ve become friends over these years.”

The Beginning Of The Rope

To fully understand how the Round-Up came to be the go-to for so many famous faces is to note its lengthy history in Dallas.

The Round-Up opened on July 11, 1980 on Cedar Springs Road, where it still remains to this day. From day one, the venue was intended as a country & western bar with a hardwood dance floor on which gay and straight people alike can enjoy Texas traditions such as the two-step.

Of course, opening an establishment that catered to a queer audience in a time when public attitudes toward the LGBTQ community were not as evolved as they are today was no easy hurdle.

In an essay for D Magazine, Willard Spiegelman, a professor at SMU, described the neighborhood as being “grimmer and grimier” prior to The Round-Up’s opening. To put that into perspective, it’s not hard to believe the rainbow crosswalks coming to the strip in 2020 would’ve been unimaginable in this “more dangerous” chapter of the neighborhood’s history.

The Round-Up was even destroyed in 1989, due to arson started at the AIDS Resource Center next door to cover up a burglary. That wasn’t the extent of legal issues the owners have to overcome, either. In addition to criminal activity in neighborhood, The Round-Up and other bars of the era also faced challenges from Dallas police.

“[Round-Up co-owner] Gary and I are in our 70s, so we remember when gay bars would be raided quite often by police, ” Pierce says. “And same-sex dancing was illegal, so they had coping mechanisms when the police came in in those days during dance time: they would just turn off the music and everyone would sit down on the dance-floor until the police left.”

In the 30 years since then, the bar has been rebuilt with additions and improvements, but it still retains its reputation as a mainstay in Dallas’ queer culture.

“The city has changed drastically now,” Pierce says. “From openly-gay police offers and openly-gay city councillors — the world is a much better place, at least locally.”

If nothing else, it’s the bar’s resiliency that has ultimately bestowed The Round-Up Saloon a badge of premier recognition from countless mainstream creatives, especially that of artists who freely embrace their queer followings.

The visits from out-of-town public figures don’t lend The Round-Up any legitimacy or validation, though. The venue has already earned that in its storied journey of being a safe space for members of the LGBTQ community.

These happenings are a testament to the reach of Dallas’s gay community as a whole. Venues like The Round-Up, as well as those that no longer exist, have fostered a scene that makes people all over the world — LGBTQ or not — take notice of a queer safe haven in perhaps one of the most unlikely regions in the U.S.

Cover photo via The Round-Up Saloon.