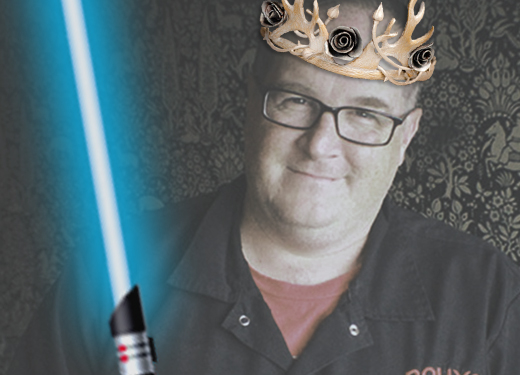 What you're reading here isn't real, you big dumb-dumb. It's fan fiction — or, more specifically, Dallas food-oriented fan fiction, hence the name “Food Fic.” Now, this doesn't mean what you're seeing here couldn't happen — the idea is that these things very much could, actually — but just that we have no proof that it actually did. Anyway, it's all meant in good fun, so take it as such. Stop being a tight-ass all the time.

The complete collection of Star Wars action figures is perched above the fire on the mantel, standing in order of chronological appearance in each film (obviously in release date order and not in chronological story order because even if a prequel is good, it still owes mad forever-respect to the originals), and including every single figure ever made — even Kylo Ren trapped in Captain Phasma's box, which Jerrier appreciates not only for the rarity, but also for the vagina joke.

The walls around the room are adorned with commissioned artworks. Each piece features some version of a scene from Star Wars, only with Jerrier's face featured in the place of the original actor's face. You bet your ass there's a classic Han-Solo-in-carbonite painting with Jay Jerrier instead of Harrison Ford. There's also one with Jerrier mid-scream as Lava Moment Anakin. Slave Leia too, but Jerrier-ed.

Surrounded by it all, Jerrier sits in a $30,000 Iron Throne replica, which he realizes isn't from Star Wars, but “it's fuckin' cool, so shut up.” He takes another swig of mimosa from his Darth Vader sippy cup and yells to no one in particular, “Hashtag opulence!”

It's New Year's Eve, and Jay Jerrier is way drunk. But not only is he drunk-drunk, he's also Star Wars drunk. As everyone knows, he's seen Star Wars: The Force Awakens an average of three times per day since its release.

“It would be more,” the mastermind behind Cane Rosso and Zoli's NY Pizza Tavern says aloud whenever he can get anyone to listen. “But I have a small bladder. SPOILER ALERT: Every time it gets to the part where Hands Rolo pees on Chewbacca's sister in the first-ever Star Wars sex part of the new movie, I gotta go. Turns out, screen-pee is contagious just like yawning.”

In this moment, there's no one around to raise an eyebrow at any of these claims. But Jerrier prefers to be alone when he's working, as he is right now. It's why he bought the Iron Throne in the first place; it's there to remind him who's boss — which, yep, still him, just him. He only sits in it when he's working (or when he's watching youth lacrosse broadcasts on the extensive cable package he bought for that sole purpose, because “soccer is for stupids”).

In this moment, he's working on a list of New Year's Resolutions.

“Well, it's actually more like goals for the new year,” he clarifies to the empty room. “Like, I have this one where I wanna hide in the trunk of Kent Rathbun's yellow Porsche. And then, when he arrives at, like, George W. Bush's Scandal watching party or Emmitt Smith's Scandal watching party or whatever fancy event he's headed to, I pop out like a trunk ninja and I'm all, 'HOSPITALITY: ONE STAR, RATHBUN.' And then I walk away. Spoiler alert: I crapped in the trunk. Second spoiler alert: Star Wars isn't real.”

He gets up from the throne and saunters over the bar in the corner, an exact replica of Mos Eisley Cantina. He claims he's making himself “another mimosa,” but he really just pours himself about a Route 44's worth of orange juice. Then he takes a long pull from the Vader sippy cup straw, nods and continues his monologue.

“My other favorite resolution is that right now, I'm getting an oven made in Italy for Pizza Hut that says, 'Suck my dongboli' and I'm dropping it on their roof. Spoiler alert: That's an incredible waste of money. Spoiler alert: Papa John is my homeboy. Spoiler alert: Voldemort showing up to yell at all those Star Wars bitches was the best, but I'm not sure why he didn't ask Gollum to get him that mood ring real quick. Spoiler alert: Khal Drogo was my favorite. Spoiler alert: He's wearing Vera Wang.”

At this point, Jerrier falls into a crazy loop of “spoiler alerting” that somehow continues to devolve until it's just him singing the lyrics of Train's 2001 hit, “Drops of Jupiter.”

In the morning, he awakens to his beloved fleet of dogs licking him out of a pile of his own orange juice vomit.

Spoiler alert: As it turns out, Jerrier still hasn't seen the new Star Wars movie. He just keeps acting like he has so that he can cover up the fact that he has seen Sisters over 100 times. The stress of keeping the secret is responsible for his current state of unrest.