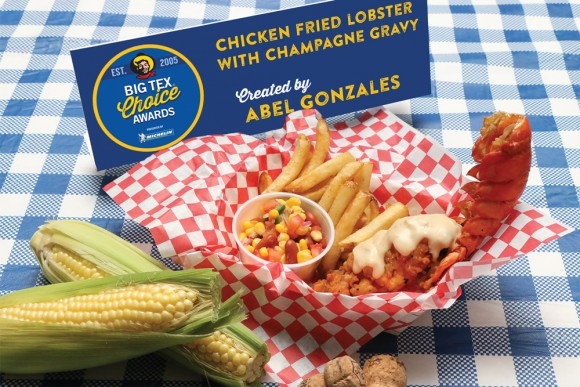 Last month, the Texas Parks & Wildlife department pulled a 10-foot alligator from the Trinity River. Those beasts, they reasoned, are hazardous to swimming and tubing conditions.

Apparently, tough, they also make for some good eatin'! This morning, the State Fair of Texas announced the finalists for its annual Big Tex Choice Awards and, in an ever-so-topical fashion, one of the eight dishes vying to be named this year's top dish — which will be decided by a panel of celebrity judges on August 30 — is a nest of deep-fried gator meat mixed with a blend of cheeses, jalapenos, onions and garlic and served on a bed of fries.

It's just one of the game-y options on this year's menu, perhaps as a nod to this year's “Passport to Texas” theme. Other wild animals being quartered, battered and fried include buffalo, pork, chicken and… most Texas-y of all… lobster? OK, then! Still, if Abel Conzales' fried lobster dish looks anything like this one, he should have no trouble hocking them at all, even if they are expected to be the single most expensive item on the Midway this fall.

But, wait, there more! Check out the below list of this year's fare, complete with photos and descriptions, courtesy of the State Fair itself.

Chicken Fried Lobster with Champagne Gravy. “For the first time in Big Tex Choice Awards history, lobster has made its way on the menu. Adding a flair of fair to a traditionally sophisticated dish, this seafood spread includes an entire lobster tail, breaded and deep fried to perfection. Served with a rich sauce combining lemon butter and champagne gravy, the Chicken Fried Lobster is not your typical carnival concoction. With the lavishness of a lobster dinner and the fried factor of a traditional fair food, this dish will satisfy both a fondness for fanciness and a craving for the classics.”

Cowboy Corn Crunch. “In a state known for its cowboy culture, this creation captures the quintessential taste of Texas — all in one bite. A kickin' mixture of sweet corn, minced jalapeño, rich cream cheese and a hint of smoky bacon, the Cowboy Corn Crunch is the perfect blend of savory and spice. This flavorful tot is fried to a golden, crispy brown and served in a unique palm leaf cone, proving especially convenient when walking while snacking around the fairgrounds. Get your taste buds ready, the first bite will knock your boots off!”

Deep Fried Alligator's Egg Nest. “Also making its Big Tex Choice Awards debut this year, alligator throws a whole new flavor into the mix. Giving fairgoers the true Cajun experience without having to travel all the way to the swamplands, the Deep Fried Alligator's Egg Nest blends rich alligator meat with Monterey Jack cheese, chopped jalapeños, onions and garlic. This flavorful mixture is then rolled in bread crumbs and deep fried to the perfect golden brown. Served atop a “nest” of shoestring potatoes and drizzled with a chipotle sauce, this dish will make you feel like a real ragin' Cajun!”

Fernie's Holy Moly Carrot Cake Roly. “Taking a unique spin on a traditional dessert, this sweet treat turns carrot cake into a heaven-filled roll. Golden-baked bread swirled with cinnamon has been flattened and filled with moist carrot cake, plump raisins and crunchy julienned carrots. Rolled with a light coating of cream cheese and then breaded in a mixture of panko, graham crackers, cinnamon and nutmeg — holy moly this is far from your typical dessert! Drizzled with cream cheese frosting and lightly dusted with powdered sugar, this divine confection is served with extra caramel on the side as well as a caramel macchiato cream sauce.”

Fried Beer-Battered Buffalo. “Sweeter and richer than the highest quality cut of beef, buffalo meat is another “first” on the Big Tex Choice Awards' list this year. This dish takes lean ground buffalo and gives it the Texas treatment — flavored with a Mesquite smoke and rolled in Pequin chili pepper, known as our state's official native pepper. The meat is then crusted in crushed Corn Nuts® and dipped in a batter made from Shiner Bock Beer®, also native to the Lone Star State. Lightly dusted with bacon bits and served with a chipotle cream sauce, the Fried Beer-Battered Buffalo is a tiny taste of Texas.”

Lone Star Pork Handle. “Meat lovers are in for a treat with this hearty helping of deliciousness. The Lone Star Pork Handle takes a hand-cut bone-in pork chop, marinates it with a rich pork rub, then dips it in batter made from Texas' own Lone Star Beer®. The seasoned pork chop is then smothered in toasted bread crumbs and deep fried to a crisp, golden brown. Finished off with a coat of bourbon barbeque glaze, this savory dish will leave you nothing short of satisfied. As defined in its name, the bone serves as a handle, making this item convenient and easy to carry!”

Pretzel-Crusted Pollo Queso. “With a hint of Tex-Mex in both its name and its flavor, the Pretzel-Crusted Pollo Queso is just the right amount of spice. Shredded chicken is combined with a rich blend of cream cheese, Monterey Jack cheese, bacon, cilantro and Sriracha sauce. Rolled into a ball and crusted with a crispy pretzel breading, this item is then deep fried to golden perfection. Served with a jalapeño ranch dipping sauce for an extra kick, this dish is crunchy on the outside while keeping its center perfectly soft and gooey for the ultimate savory experience.”

Smoky Bacon Margarita. “An unconventional pairing of flavors adds a subtle smoky taste to a traditionally tangy drink. The Smoky Bacon Margarita takes the smokiness of freshly-cooked bacon and infuses it into a frozen lime margarita. With just a hint of smoke, this drink still captures the zesty citrus flavor of a traditional margarita. Finished off with a pinch of bacon crumbles on top, this thirst-quenching drink is served in a collectible souvenir cup for an added funky flair. Sip on this refreshing beverage and cool off from the Texas heat! Contains alcohol — must be 21 years of age.”

Oh, also? You can taste all of these things before anyone else, so long as you hurry up and snag some of the limited tickets to the final round of voting, which takes places Sunday, August 30.

After that, you'll have to wait until The State Fair of Texas' official run, September 25 through October 18. 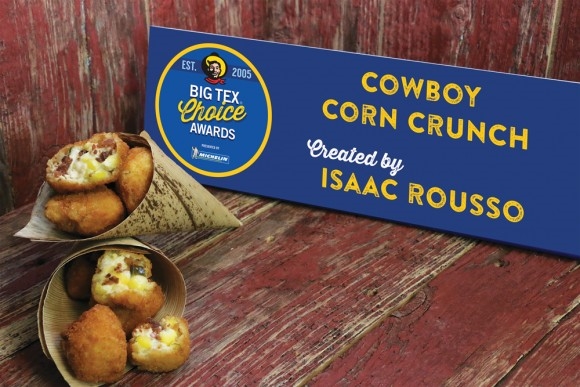 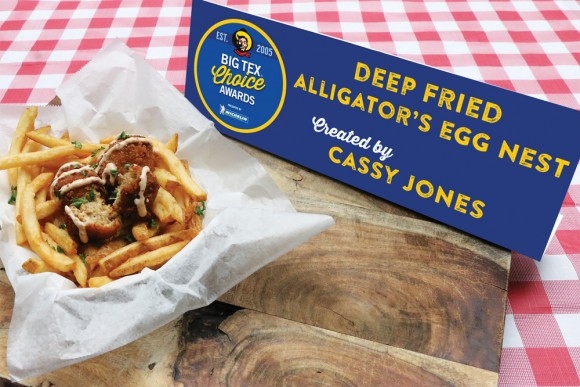 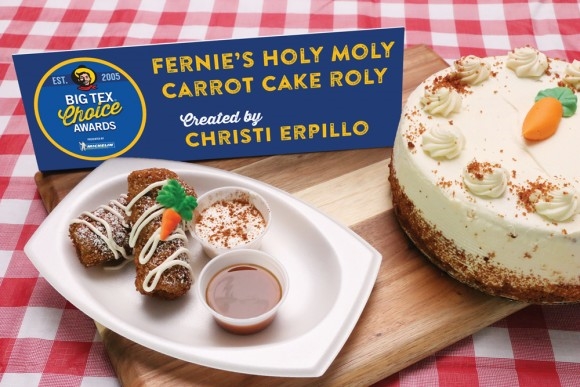 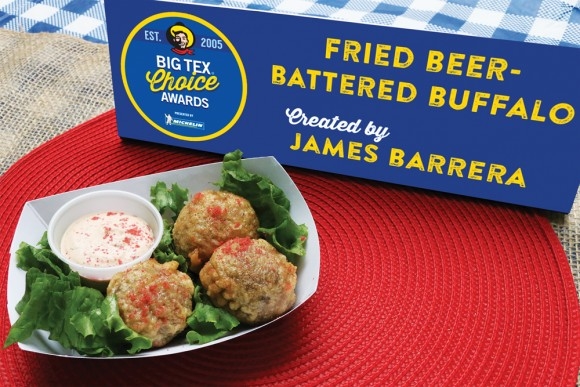 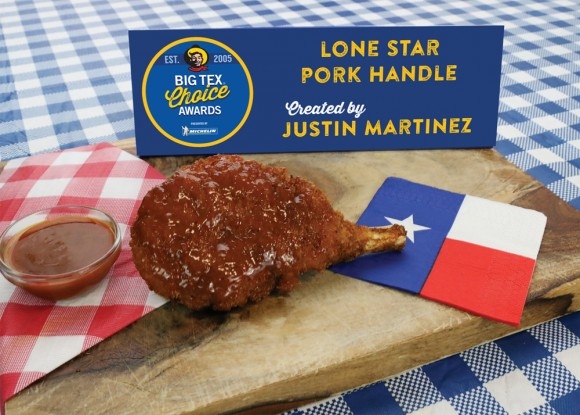 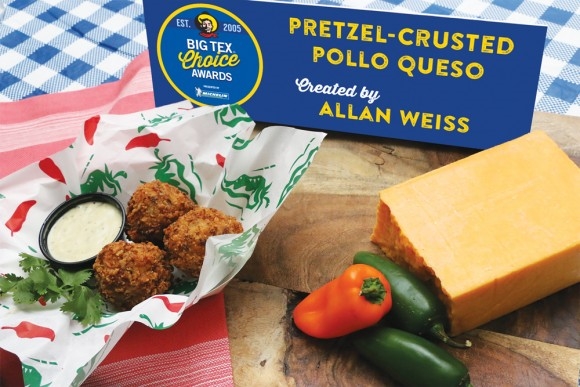 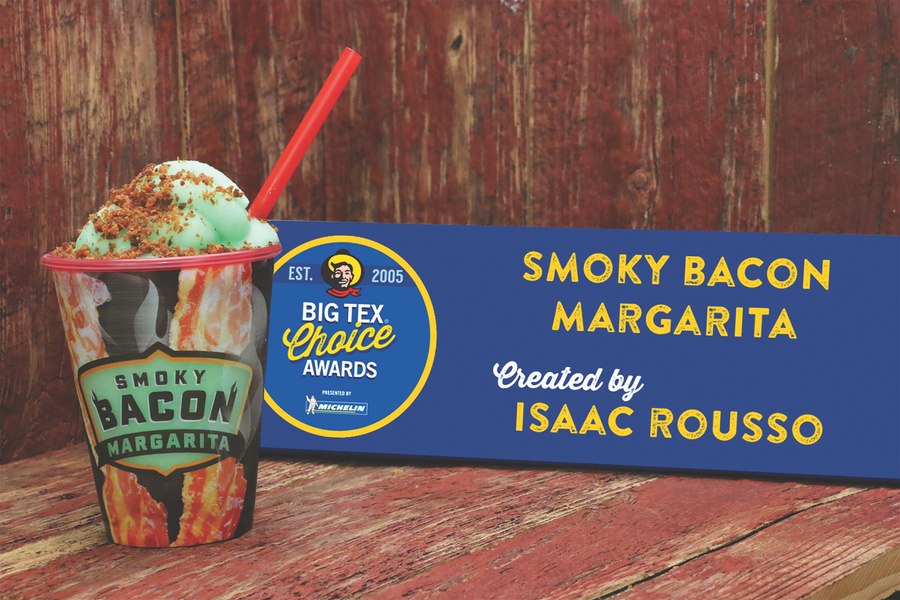