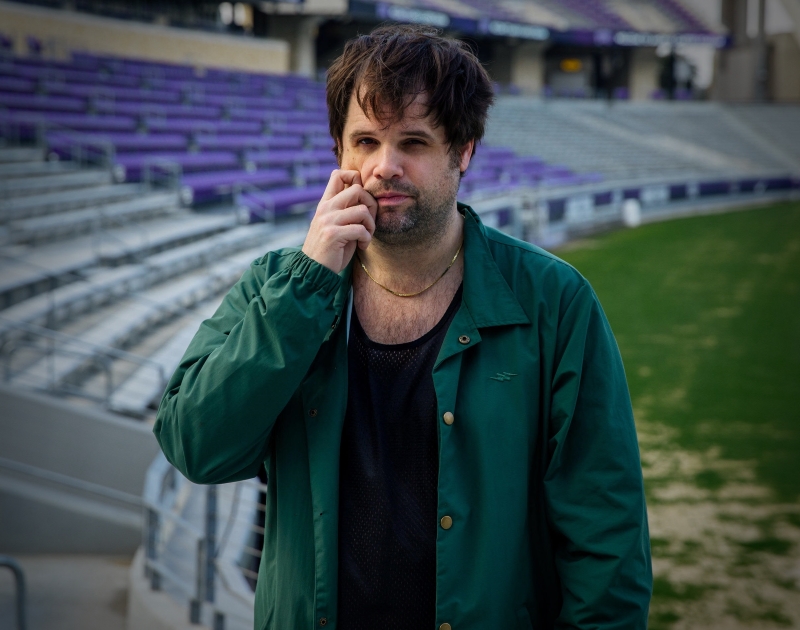 Check Out SoS’ Slimy New Clip, And Gear Up For The Band’s First New EP In Five Years.

Son of Stan – “Deez Daze.”
RIYL: When the summers never end.
What else you should know: It doesn’t matter what the weather outside is like right now or that it’s currently February, the first sign of summer is already upon us. That’s word that Son of Stan has a new EP called Diamond Cuts due out on March 9, preceded by the world premiere of a new music video below.

Shot by LA-based Kilby Rodell and Max Loeb, who’ve done the last few Son of Stan videos, the video for “Deez Daze” finds SoS mastermind Jordan Richardson playing a slimy chef a la Barth from You Can’t Do That on Television.

While the rest of the EP is made up of songs about “doing heartbreak stuff and getting heartburn and shitty apartment parties and weird North Texas homeschooled people that are driving in all of the cars next to us ,” the lead single is semi-political, says Richardson.

“It’s kind of a Trump song,” he says. “Everyone has to write their confused tune about the orange Cheeto faux-leader man, though I didn’t want the video to represent that in any literal sense or even seem familiar or appear political. The song speaks for itself and I think the video does too.”

How is Diamond Cuts different from your first two Son of Stan records?
This one is a “band” EP. The band is called Son of Stan & the Boat Club Band. The two previous releases were primarily just me (and producer Adam Lasus) and more of just a “solo” type sitch. It’s not a new thing for me to produce a rock band, but honestly it’s sort of a new thing for me to produce a rock band that I am in and write the songs for — or at least something I haven’t done in this manner in about 10 years…I’ve been working on it off and on for a couple years now, so it actually includes an array of people that have been in or remain in the live band…which includes myself (playing guitar and drums and vocals), and current members Steve Steward (Oil Boom, Epic Ruins), Michael Doty (Duell, House Harkonnen), Austin Green (The Cush) and Justin Pate (The Orbans, as well as my old bandmate from the Ben Harper/Ringo Starr days). Samantha Villavert (Sealion) was our old keys player so she’s all over the EP, too.

Georgia came out five years ago — what all has SoS been up to since then? Seems like you’ve done a lot more producing and mixing of late.
It’s outrageous how fast five years goes. Honestly there hasn’t been an official release but I’ve never gone dormant. We’ve been playing shows the whole time. I made a record (then scrapped that record) and have been chipping away at this EP for a while. There is also a new full-length solo Son of Stan record that’s about halfway finished and I hope to release that next fall or early in 2020. Which sounds so futuristic and cool actually. It’s a really weird album and like nothing I’ve done before. I’ve never been more excited about anything else when it comes to Son of Stan. I’ve had the wildest and best and stormiest and worst couple of years that I’ve ever had so I’m still chasing what all of that means exactly. But as I figure that out a bit more, I inch a little closer to finishing that record. That record doesn’t have a title yet but it sounds like the inside of an anxiety casino. In a good way. In an OK way.

Stan aside, what else is going on with your label, Wizardvizion?
Wizardvizion is going pretty well. Pretty excited about the new Steve Gnash record that will be coming out pretty soon. Also one of our favorite bands we have worked with, Hxxs (from KC by way of CA) just got signed to Captured Tracks and have a new record coming soon. We’ll be throwing Summerthon again this summer. Fuck winter.