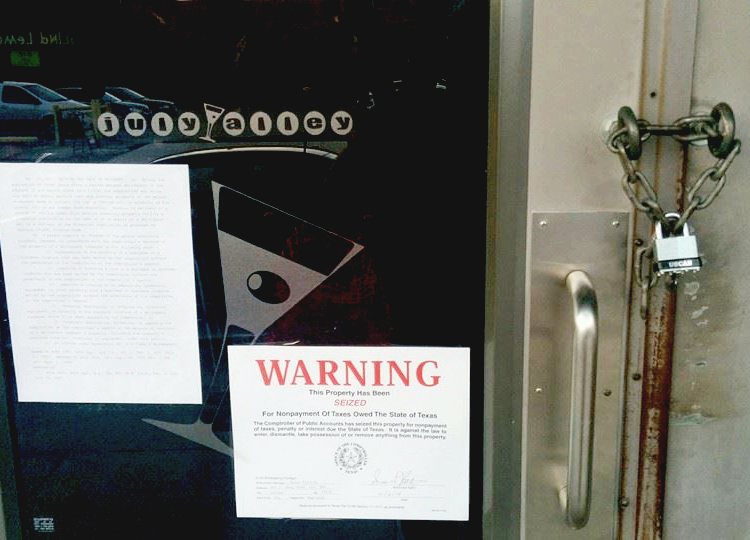 No, For Real This Time: July Alley Is Likely Closing Soon.

Update on October 2, 2014: After another month of hanging on by a thread and showing good face, July Alley has now, one hundred percent for sure, closed. Locks have barred the Deep Ellum spot from the outside and a sign posted on the door announces that the “property has been seized for nonpayment of taxes owed the State of Texas,” just as the below story from September 3 foretold.

Back on July 2, employees at Deep Ellum's July Alley posted an update to the bar's Facebook page, urging regulars to come have one last drink at the bar that night — before it closed its doors for good.

The following day, though, as the spot's Facebook page began to fill with messages from regulars eulogizing the venerable Deep Ellum watering hole, July Alley opened up once again for business, and seemingly as usual — save for a few rumors of the place's still-impending close.

Now, though, an employee who spoke with Central Track on the condition of anonymity tells us that it was another former employee responsible for those initial Facebook posts that spawned the public rumors of July Alley's forthcoming closure. It should be noted: Those Facebook posts — as well as every other post on the July Alley Facebook page after October 27, 2013 — have since been deleted.

“We have been trying to keep everything under wraps, as we had a Hail Mary pass last minute that was supposed to keep us open,” the source tells us. “However, that has since fallen through. The comptroller has one more cash seizure they will do before closing us down. A previous employee was running the [July Alley] Facebook page, which started the public rumor of us closing. Unfortunately, it made us appear that we were crying wolf. We do not have a date — but it will happen. The owner is expecting [the bar's last night] to be next Thursday, but we are hoping we still have a few weeks.”

As was the case when July Alley was temporarily shuttered back in 2011, the employee tells us that the issue this time around also centers around owner Frank Edwards' failure to pay state taxes.

“The comptroller has already seized the bank account, forcing us to [be] cash-only the last month,” the source says. “They have also done on-premise cash seizures. Following their protocol — and our past experience with this same issue — there is one more seizure and then they will take the bar. That's what we are waiting on.”

While Edwards expects that final seizure to occur on September 11, there's still the chance that it comes a few weeks down the road. There's also the possibility that, like in 2011, the State Comptroller of Public Accounts will reach a settlement with July Alley that'll allow it to stave off execution for a while longer or reopen at some point down the road.

While our source says they hope that's the case, they're also not putting much stock in either of those scenarios, either.

“The only hope is that they will work with us on a settlement like they did after our seizure in 2011,” says the source. “But it's much worse this time around — and the owner doesn't know if he can keep it open.”

For the time being at least, these appear to be the final days for July Alley – although, once again, we've certainly been down this road before.

Just in case, though: You might want to hurry over with a handful of cash for one last cheap ass drink while you've got the chance. And, yes, we'll keep you posted when more concrete information becomes available.

SEE ALSO: DIGGING DEEP. // New Businesses Are Flocking To Deep Ellum These Days. Here's A Primer On The Whole Lot Of Them.