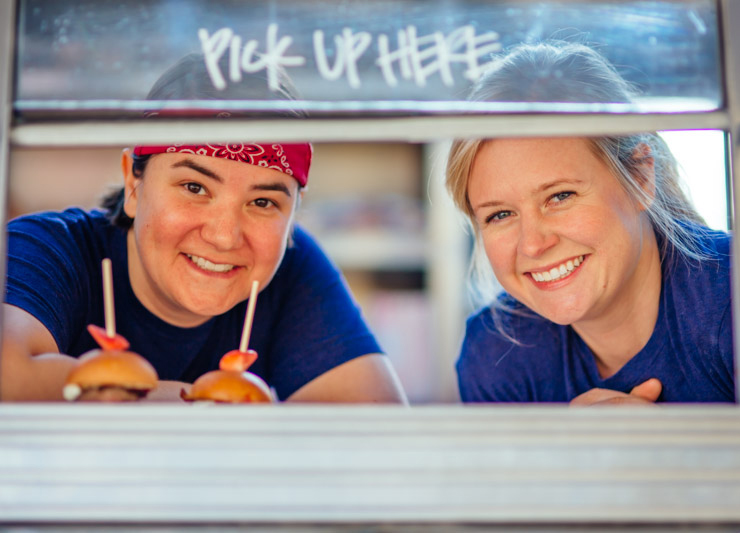 It’s no secret: We’ve got a soft spot in our hearts for the Easy Slider Truck gang.

It helps that they’ve parked their truck outside of our parties in the past. It also helps that, whenever our food-to-booze ratio feels off at the Double Wide’s Thursday night Good Luck Karaoke affairs, they’re usually parked out front, ready to help us remedy the situation. And, let’s face it, it helps too that we kind of see them parked everywhere, even if that’s not physically possible.

But the move also raises some interesting questions — namely about what this means for Easy Slider’s future and what this says about the Dallas-Fort Worth food truck scene as a whole — so, as the company moves forward with its expansion and plans for its one-year anniversary celebration in January, we figured it high time we dropped Perini and Holmes a line and asked them couple of questions about the state of their food-trucking ways.

As the tireless twosome tends to do, they answered our queries in tandem.

First of all, congratulations on the expansion! Business must be pretty good! How long have you been planning this?
We’ll never forget the date: March 31. We turned down triple the number of events that we actually worked that day. That’s when we started thinking about another truck. But, since we were only three months into the food truck business, we were a little gun-shy. Then our private event business really took off shortly after that with all the weddings and graduations and such. It was a blessing and a curse because we were forced to cancel our regular stops around town that we’d worked so hard to establish. That was incredibly frustrating. So we decided there’s only one way to be in two places at once!

What was the main decision in going for the expansion? I imagine, as you say, being two places at once was a tough prospect to pass up. Does this mean you will be expanding your reach, too? As in more Fort Worth gigs, more Denton events, and the like?
Absolutely! Expanding our reach was also a big part of the decision.

What does this mean for your team? Will you two have to man your own trucks now instead of rolling together as a super-duo?
You’ll still see both of us rolling super-duo style pretty often. Occasionally, we’ll be split up, but that won’t be the norm. We are lucky to have a stellar team that’s as passionate about Easy Slider as we are, so you’ll have the same experience that you’ve always had.

When deciding to go for a second truck, did the idea of opening up a storefront location come up? How do you guys feel about that idea down the road? Have you considered it?
Of course we’ve considered it. We are constantly talking about the next step. We’d love to have a venue that really embodies Easy Slider’s style — live music, fun people, good food, lots of booze. And food trucks will probably always be a part of anything we do.

What does this move say about Dallas-Fort Worth’s embracing of food truck culture overall? Gotta be a strong indicator that things are good at the moment, right?
It’s important for us to make sure this isn’t a fad. So, every day, we set out to educate the community about truck food culture. Why would anyone not embrace an industry that offers high-quality, inexpensive food options and [makes them] more accessible? It’s proven that food trucks have a positive impact on a city’s social and economic vitality, so we hope Dallas gets on board — and stays on board.

Awesome. And agreed. Last question, guys: Can I marry the Sweet & Lowdown?
Get in line.

Cover photos by Scott Mitchell. Check out Easy Slider’s Facebook Page to stay up-to-date on their locations and updates.