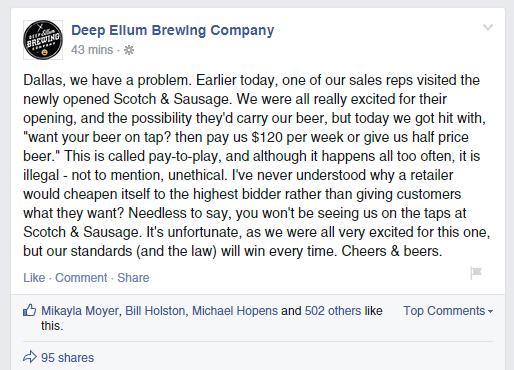 New Oak Lawn spot Scotch & Sausage has only been open for about a month now, and while there's really no arguing that the place's name leaves a little to be desired (try saying it five times fast!), at least one local brewing company is today trying to make the case that the place's business practices could use an upgrade, too.

Just about an hour ago, the folks behind Deep Ellum Brewery Company posted the following to its Facebook page, calling out the Scotch and Sausage team for what it believes to be shady business practices that are aimed at taking advantage of small breweries.

A manager at Scotch & Sausage confirms that a sales representative from Deep Ellum Brewing Company was in the restaurant today for a meeting with co-owner Dylan Elchami. As for what exactly happened at that meeting, she wasn't sure. Representatives at Scotch & Sausage did, however, pass along the following brief statement in an email: “It's an unfortunate misunderstanding,” the email reads. “We are trying to contact Deep Ellum to resolve.”

Update at 6:30 p.m.: Scotch & Sausage co-owner Rami Rassas has taken to the DEBC Facebook posts comments to defend itself. You can click the above embed to read those comments in full. The gist of it: “We knew about Deep Ellum Brewing, we just don’t think they are good enough to carry in our restaurant… we were not interested… I am disappointed about how an established company like [DEBC] took to social media to bash the new kid on the block, but I will promise you Scotch & Sausage will always be the Better Business.” Later, in another comment, he adds: “The salesman has been trying to get us to carry the beer for months now but we refuse to carry something that does not support our concept in any way. We find the comments and bashing by DEBC extremely foul and unprofessional but we will not stoop to there [sic] level.”

“Our purpose of that obviously wasn't to gain their account,” he says with a laugh.

Rather, Reardon says, the idea behind the post was to make a larger point about businesses taking advantages of small brewing companies like his own: “You hear about this sort of thing all the time. It's happened to us a few times this week, even. But asking for $120 a week, that's not even business. It's asinine. And it's something we just couldn't comprehend. It just should be known: Our brewery, with our standards, we can't do that.”

So Reardon decided, today “was just the right time to take a stand.” And the Facebook post, he says, was a way to do so.

What he hasn't done, he admits, is contact the Texas Alcoholic Beverage Commission to file a complaint.

“You could send a little email to TABC,” Reardon says, “but that only goes so far.”

Plus, Reardon says, his concerns are greater than a debate over a single tap at Scotch & Sausage.

“We're not Ben E. Keith,” Reardon says of DEBC. “We're not Andrews [Distributing]. We're a small company. We can't stand for this.”

The playing field, he says, needs to be leveled. And this update, he hopes, is a first step toward that.

Says Reardon: “If we're all playing by the same rules, in a free market with good beer, we all win.” 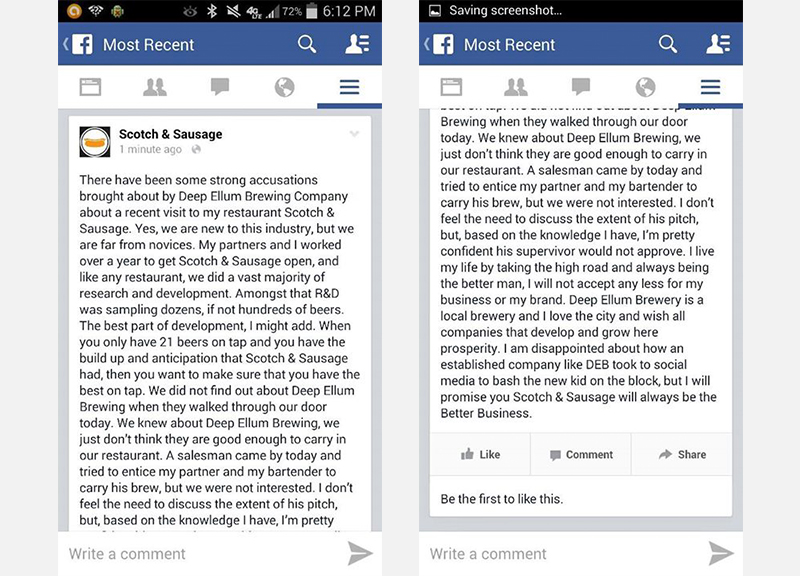