Don’t Be The Person Who Wears Flip-Flops To The Bar. 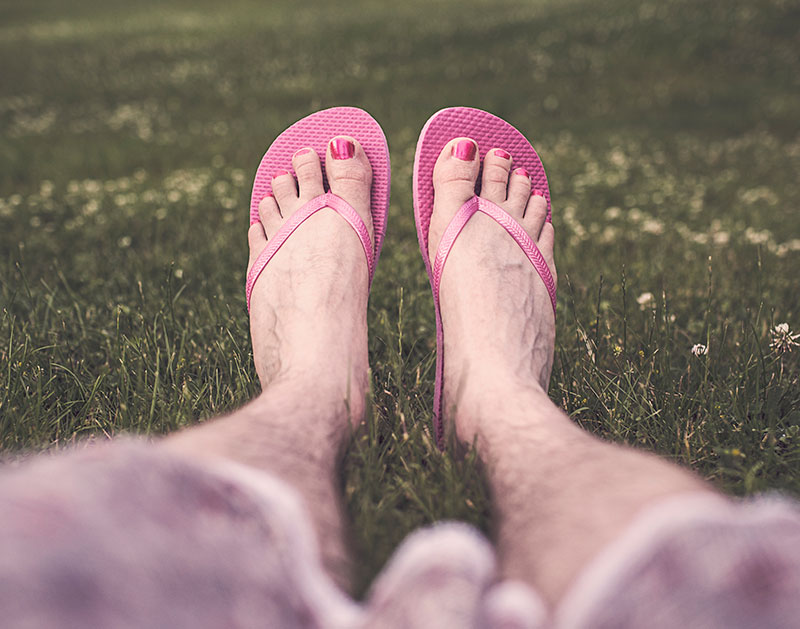 Save The Flip-Flops For The Beach, You Neanderthal.

How’ve you been, bro? Pretty well, we’d imagine, seeing as how generally oblivious you are to, well, everything and everyone else around you. Given that, we’ve got a bit of a bone to pick with you about the inappropriate attire you sport absolutely everywhere.

Now, normally this is the type of thing we would say to your face. It’s not our intention to publicly shame you here — OK, maybe it is a little — but, honestly, your disgusting feet are so fucking disgusting, we just couldn’t bear to come any closer.

Really: They. Are. Disgusting.

Don’t you know this is uncouth? For years now, it’s been an unwritten rule that civilized, evolved adults don’t wear flip-flops to bars.

Maybe you’re too dense to pick up on the subtleties of implied decorum, though. So we’ll do you a solid here and spell it out: Don’t wear flip-flops to the bar. Please. And thank you.

We’re not even kidding: Nothing makes us want to spew quicker than taking a big gulp of beer and then catching a glimpse of your hairy ass Cro Magnon toes from across the bar. It really needs to stop.

If not for our sake, then you should really do it for your own health.

Research has been done on the feet of people who wear flip-flops — studies that show that as many as a million microorganisms per square inch can grow on the feet of people who go in public in flip-flops. We’re talking things like the fungus Candida, which is not only responsible for causing yeast infections, but is one of the most likely fungi to cause hospitalization. Meanwhile, there’s Propionibacterium (the one that makes your feet smell like you’ve been stomping barefoot through a barn) and other types of fungi are responsible for athlete’s feet.

And keep in mind: Folks who are picking up those bad boys are wearing their flip-flops to seemingly sanitary spots — places like the beach and not the cesspool that is most bar floors.

It gets worse: Those same studies show that, after three months of wearing the same pair of sandals — or, y’know, the length of the average summer — 93 percent of all flip-flops will be rife with fecal bacteria. Another 20 percent will have E. coli. Most disturbing of all, though? The fact that flip-flops are ideal breeding grounds for a potentially fatal germ called Staphylococcus aureus. Ever had a cut or bruise on your foot or handled your flip-flops with your hands? Congrats! You’re most at risk!

But, hey, maybe you don’t put too much stock into science. We won’t blame you for that — we did just use several big words. So let’s put it in terms that might be easier for you to understand: You know that phenomenon where everyone you’re hitting on looks a lot more attractive in a dimly lit bar? That same theory applies to the bar’s floor. And that floor already looks pretty putrid even in the most ideal lighting circumstances.

Gross, right? Well, not even pitch blackness would make up for how filthy your own feet are, you obliviously rancid bar patron.

Sorry if it sounds like we’re picking on you here.

To be fair, it’s not just you. Nobody dresses up for anything anymore. There was a time when even the slobbiest Americans wore their Sunday best if they were planning on getting on an airplane — or doing pretty much anything else in public for that matter. These days, though, wearing yoga pants to the grocery store is, sadly, becoming more the norm than the exception. Hell, a couple years back, President Obama became the first-ever president to be photographed in public wearing flip-flops. Granted, he was on a beach in Hawaii while vacationing with his family, not alone in the corner of a crowded bar, dancing to a Brooks & Dunn song on the jukebox like you.

And, needless to say, you are not the leader of the free world. Nor are you at the freaking beach. You’re just one of the least dignified individuals we’ve ever had the displeasure of sharing oxygen with.

Have some respect for yourself, pal. And maybe a little courtesy and compassion for your fellow man.

Smell ya later,
Cory Graves and the rest of the Central Track Staff.