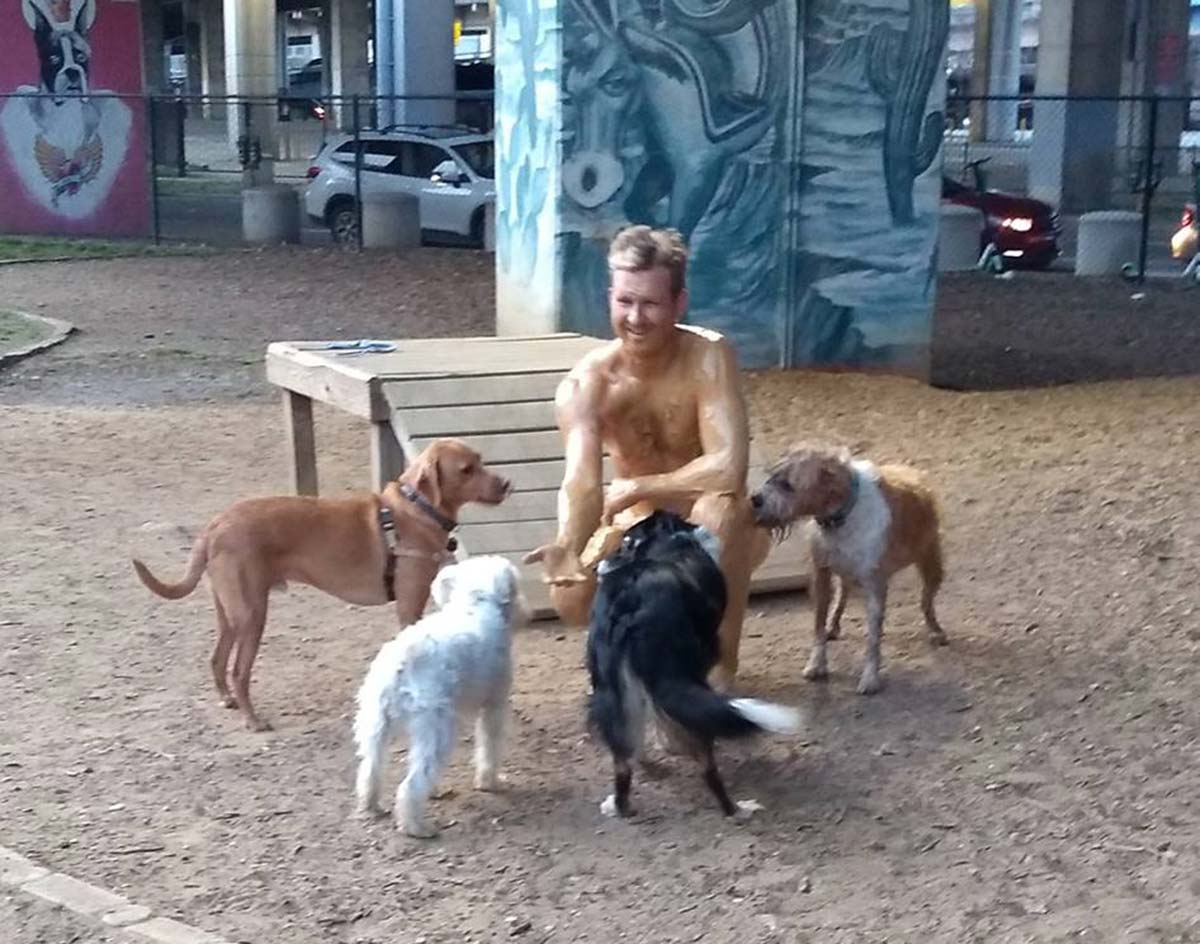 A North Texas Fantasy Football League Forced Its Last-Place Finisher To Cover Himself In Peanut Butter And Visit The Dogs At Deep Ellum’s Bark Park Central.

Wednesday was a pretty normal day for Clinton Butler — until it wasn’t.

After wrapping up the work day at his nearby place of employment, he took his one-year-old mixed breed pup Kier to a dog park in the Deep Ellum neighborhood of Dallas — officially known as Bark Park Central — just as he so often does. But this visit to the park included something Butler’d not seen before as a different beast entirely entered the fenced-in dog playground.

“I was turned around talking to a friend,” Butler says. “[Then I noticed] that the other people facing the opposite direction had strange looks on their face.”

What he saw upon turning around took him off guard, too. As Butler described it on his Facebook feed, a man had entered the park, covered head to toe in creamy peanut butter and wearing nothing but gold lamé skivvies.

It was a lot to process — the dogs and dog-owners in the park at the time were alike instantly riled up over the presence of this mysterious visitor — but unique enough that Butler did what most anyone would in this social media climate we live in: As the dogs in the park began curiously approaching and investigating the scene, Butler pulled out his cell phone and snapped a photo of what he saw.

“I would’ve got a better pic or a video if I wasn’t so flabbergasted,” Butler says. “It all happened pretty quickly.” 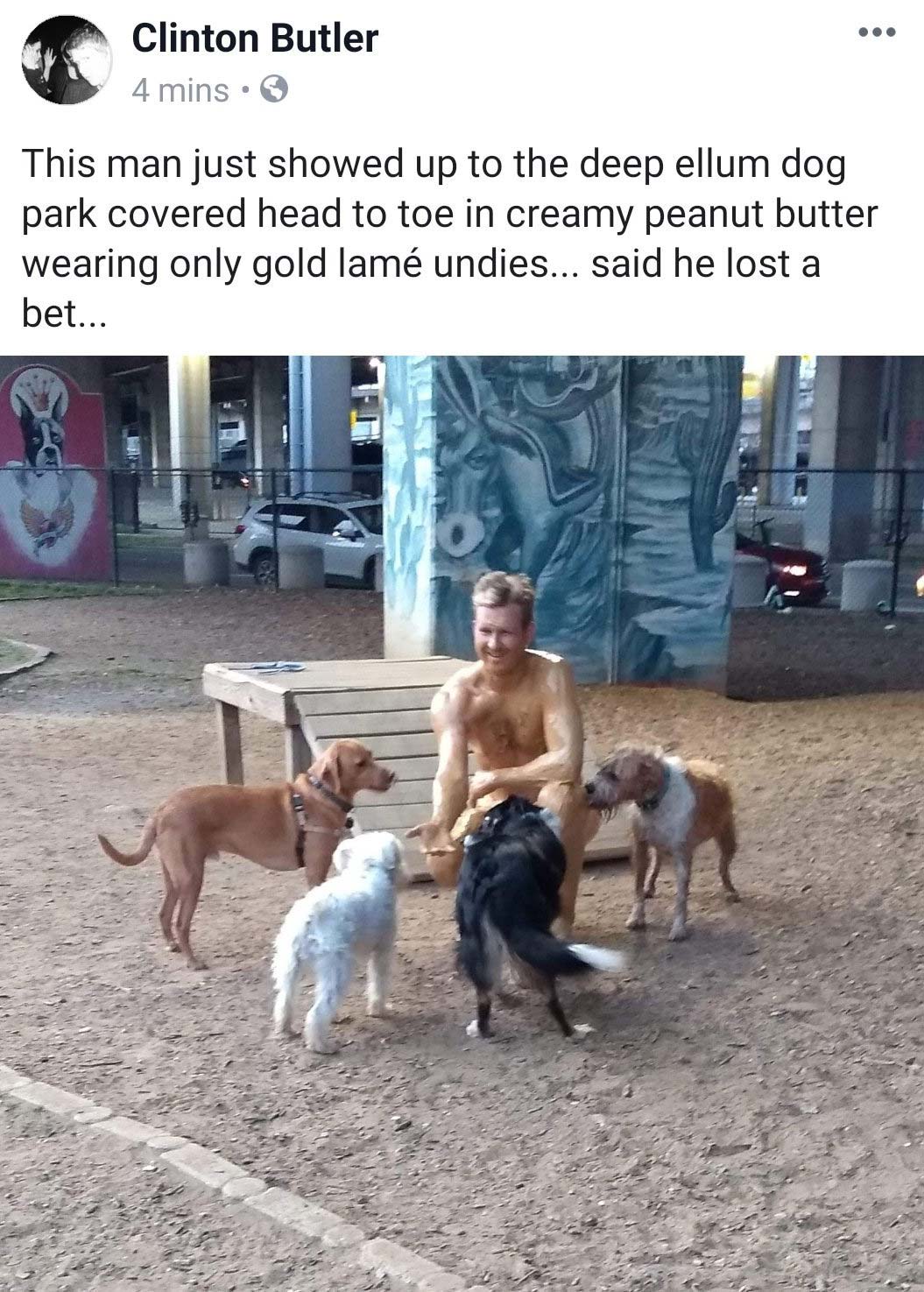 Within a few hours of posting the photo to social media, Butler’s image began to go viral. Two days later, it boasts around 1,000 Facebook shares of people alternately finding humor in the situation and being creeped out by the potential motives behind the man in the photo.

Butler, for his part, says he pretty quickly found himself in the former camp. So, too, did the handful of people who were in the park with him as it all went down, with their own immediate concerns quickly assuaged by the friendly demeanor of the Peanut Butter Bro, who seemed to understand the awkwardness of the situation he was putting the dog owners into and who explained himself to all within earshot by saying that the stunt was the payoff for a Super Bowl bet he’d lost.

“Before I realized what was going on, I was definitely confused and a bit unsure of dude’s intentions, but that quickly changed,” Butler says. “He was a genuinely nice person from my estimation. He had a kind attitude and seemed to be a good sport about it. Everyone was a bit horrified at first, trying to get an idea of what the fuck was happening, but after his proclamation of it being a bet, it did start to click and everyone started smiling more and giggling. He was honestly really nice. He felt bad for freaking people and dogs out. He just kinda chilled for a few minutes, tried to make sure the dogs got to get close if they wanted to and tried to calm the ones that were freaked out.”

Thing is, it wasn’t a Super Bowl bet that the man had lost. But, well, it was close enough: The stunt was his punishment for coming in last place in a local fantasy football league.

“My friends and I play fantasy football, and I was the big loser,” says 25-year-old Arlington native Steven Shrout, whom Central Track can now confirm as the identity of the Peanut Butter Bro. “I told the people at the park it was a lost Super Bowl bet because I was really nervous and embarrassed at the time. [It was] extremely humiliating, but the people at the park were really nice about it.”

Shrout’s league is a 12-team one that some high school friends formed in 2009. For the league’s tenth year — and Shrout’s first within it or, for that matter, any fantasy football league at all — the players decided to “up the stakes” by charging all players a $250 buy-in, and forcing the last-place finisher to either pay an additional $250 to the winner or to perform a humiliating stunt the remaining players in the league all agreed upon.

SEE ALSO: CLASS INTERFERENCE. // A Dallas Guy Got Last Place In His Fantasy Football League. His Punishment? He Had To Take The SAT.

After watching his team’s season go up in flames as his No. 1 overall pick, the Pittsburgh Steelers running back Le’Veon Bell, chose to dispute his real-life contract by sitting out the entirety of the National Football League season, Shrout — who insists he has “a solid career” — chose the punishment over the added payment. Armed with that decision, the league — apparently inspired by a YouTube prank one of its players had seen — decided it would force Shrout to spend 10 minutes in a dog park while covered in peanut butter and wearing nothing else but a Speedo. And so Shrout purchased a gold Chubbies-brand bathing suit and a jar of creamy Jif-brand peanut butter and headed off to the Deep Ellum dog park on Wednesday afternoon. Because, as he puts it, “Deep Ellum has nice people in it from what I have experienced before, and that park seemed perfect.”

“There was no sort of twisted pleasure behind it, like some people on the wild web think,” Shrout adds. “It was meant to be comical.”

It was received as such at Bark Park Central, too.

“[At one point] he kinda squeegeed some [peanut butter] off his arms and flung it to the ground, which my dog in particular was all about,” Butler says with a laugh. “Then he took off, said thanks and ran to a truck where he had a towel in the bed and started cleaning himself off.”

A fellow league member named Austin Durham, who was on hand to document the payoff and provided Central Track with the above-embedded video of Shrout entering the park, says the league is satisfied with how the bit played out.

“I’d say everyone is pretty pleased,” Durham says, “especially with how it’s taken off on social media.”

Shrout, for his part, is fairly pleased, too.

“Everyone that knows me thinks it’s the funniest thing ever,” he says. “But this may be my first and last year playing with these guys.”