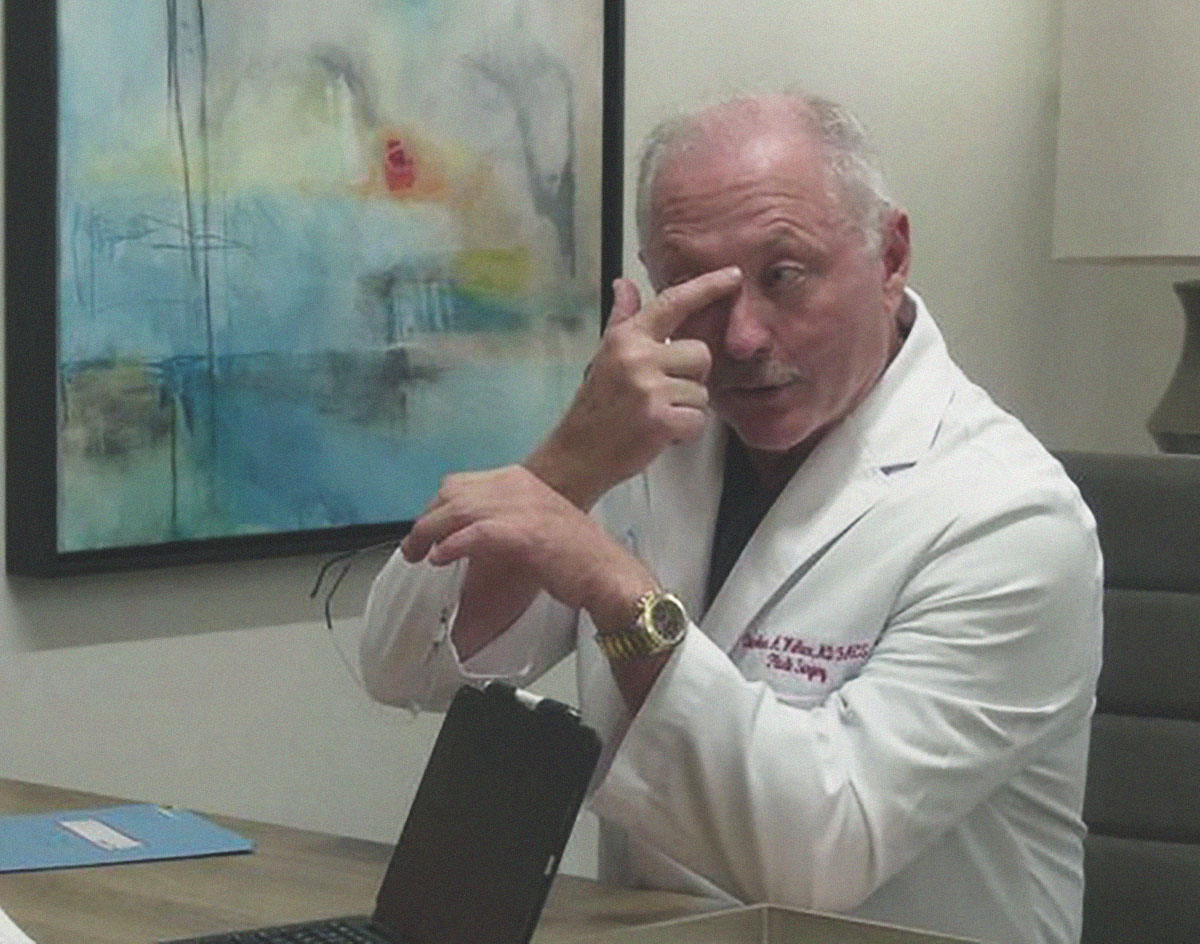 Dr. Charles Wallace On His Portrayal In Sacha Baron Cohen’s Latest: ‘I Was Flat Lied To And Taken Advantage Of With All The Tools Of Hollywood.’

For 31 years now, Dr. Charles Wallace has worked as a private-practice plastic surgeon in his native Dallas area, and his ties around the region run fairly deep, really. According to his Beauty By Design bio, Wallace attended Richardson High School, the University of Texas at Austin and Dallas’ UT Southwestern Medical School, and then served as a general surgery resident at the Baylor University Medical Center in Dallas.

So when the 63-year-old Navy Reserve commander — along with a few other notable locals — made a cringey appearance in Sacha Baron Cohen’s October 23-released Borat Subsequent Moviefilm: Delivery of Prodigious Bribe to American Regime for Make Benefit Once Glorious Nation of Kazakhstan, yeah, he got some phone calls.

“I first thought, ‘What on earth is this about?'” Wallace says this week, recalling how his phone started repeatedly buzzing early on during the day of the film’s release. “Then someone showed me the clip, and I said, ‘Ohhhhh! That’s what this is about!'”

A year earlier in September 2019, Wallace had given an out-of-office plastic surgery consultation to what he was told was a pair of “very wealthy Middle Easterners with an odd way of communicating” who were in the area and looking for information on rhinoplasty and breast implant surgeries. Portions of that meeting, which Wallace says was filmed and recorded without his being aware, found their way into the Borat 2 final cut. They arrive as part of a minutes-long scene in which the titular character and his 15-year-old daughter Tutar inquire about ways to make the latter more attractive to American men of power.

At best, the scene reads as uniquely awkward; at worst, it’s wholly offensive. Wallace is seen speaking stone-faced about the possibility of performing surgery on the girl. He is heard saying he would consider sleeping with the girl “if [her] father was not here” in the meeting with them. Along with Cohen’s satirical character, Wallace also willingly engages in gross stereotypes about Jewish noses, even using his finger to exaggeratingly trace how long and how “bad” they can be.

Upon seeing the way his scene was cut, no, Wallace was not surprised at the volume of calls and messages his office was receiving about what he now says was his “unusual” appearance in the film.

Still, he was quite surprised at how the meeting was portrayed.

“Over 31 years, I have taken care of my share of VIPs,” Wallace says.

And this meeting didn’t really strike him as too far out of the norm — not in the moment, anyway. After receiving a “social briefing” and being “advised on how not to offend” his new clients, he was asked to sign a confidentiality agreement — one that, he now admits, he didn’t read too closely. The more than hour-long meeting that followed included more paperwork, some photography and an extended question-and-answer session — all usual standards of medical care in Wallace’s experience. While he says the consultation featured the “odd, questionably appropriate sense of humor” that he’d prepared for, Wallace was most struck by how often some of the more bizarre questions were repeated — although that too seemed to line up with what he’d been told to expect.

“Western civilization is not the only civilization,” Wallace says. “Hell, there’s people from East Texas that come in wearing overalls and the muddiest boots you’ve ever seen — but they’ve got cold, hard cash, so you try not to offend. You just try your best not to offend. And I had been prepared for it, so I was mostly able to keep my stiff upper lip — although I think you can even see in the scene that there are moments where I’m trying to hold myself together.”

Following the meeting, Wallace was paid his usual $500 consultation fee. Aside from the fact that he never again heard from these curious clients, whom he’d quoted some $20,000 worth of procedures, he says he didn’t really harbor any thoughts about the meeting after the fact.

Then the movie was released.

Once it became clear what was going on, Wallace’s office staff gave him a briefing on Sacha Baron Cohen. The plastic surgeon, who says he much prefers outdoor activities like skiing to Hollywood entertainment, claims to have never previously heard of the comedian, his Borat character or the acclaimed 2007 film that entered the character into the zeitgeist.

“We found out, basically, that I’d been duped,” says Wallace, who also claims to have not yet seen the entirety of the film in which he cameos. “How they picked me, I don’t know. Maybe they interviewed others. Maybe I was the best show pony. It’s proof, I guess, of Hollywood people who can play dress-up and perform — and clearly hide cameras and microphones, because you can tell they used at least three cameras in the scene.”

Wallace is adamant that he is not as “lecherous” as he says the scene is “designed and calculated” to make him appear.

He “categorically” denies that he would ever joke about having sex with a client with whom he was “having a professional relationship and having boundaries.” He says his answer about having sex with the Tutar character if her father wasn’t around was actually a response to another question entirely, and that it was simply placed where it was as a act of “clever editing.”

He points out that the office worker that the film’s main characters engage with after his scene has no affiliation with his practice whatsoever. He doesn’t recognize the woman, whose scene is clearly shot with better-quality cameras and equipment than his own was. He certainly did not direct the woman to tell Borat and Tutar that he would not use potatoes as breast implants — although, naturally, he never would use any such foreign object as part of a surgery.

Furthermore, he says he was unaware that one of the people with whom he was meeting was supposed to be a 15-year-old girl; given his decades of experience as a doctor, he says, he could tell she was well older than that. (In reality, actress Maria Bakalova, who played the role of Borat’s daughter, would have been 23 years old at the time of her meeting with Wallace.)

Lastly, he waves off concerns about the Jewish nose stereotypes he engaged in on camera.

“I don’t know what [Cohen] was trying to make a point of there,” Wallace says. “I have done hundreds of rhinoplasties for Jewish clients over the years; they come to me to fix their Jewish noses. I guess it’s OK for a Jew to say it, but not a gentile. But these are fairly common terms in the industry — Roman noses, Asian noses, African noses, Jewish noses. I certainly didn’t intend to offend any of my Jewish friends and patients.”

Wallace says it is he who deserves to be offended in this scenario.

“To entrap people is unethical, but I guess Hollywood doesn’t have a code of ethics,” he says. “I’m aggravated. I was flat lied to and taken advantage of with all the tools of Hollywood. But what’s [Cohen] trying to say? Is this a beatdown of a white man? Is this a beatdown of plastic surgery? I understand he identifies as a social justice warrior. But what social justice is this? I don’t get it. There’s a lot of slapstick humor that doesn’t humor me, but I don’t see anything funny about this.”

Despite everything, Wallace says his unwitting participation in Borat 2 hasn’t yet negatively affected his career in the slightest.

“If anything,” he says, “it’s been great for business.”

He says a few former clients of his have called him to schedule surgeries after having seen him in the movie. He says the appearance apparently jogged their memories of his services. The real tricky thing, he says, is finding the time to accommodate them. Business has been booming ever since the still-ongoing coronavirus pandemic took root stateside in the spring. Due to travel restrictions, Wallace says his clients have more disposable income and more recovery time on their hands. This pandemic, he says, has been “a great time to get surgery.”

A few weeks removed from the movie’s release, Wallace says this “weirdest chapter in [his] practice’s history” has “already kind of boiled over.” The dozens of daily calls, messages and emails his office at first received due to his cameo have since dwindled to a handful of random contacts every few days.

“We get an occasional stoner calling in the middle of the night,” Wallace says with a chuckle. “They leave messages like, “Dude, can I get some potato titties?'”

Laughs aside, Wallace says he’s hopeful such phone calls will soon stop altogether. Ultimately, he says he’d prefer to move on and to leave the entire incident in his past.

“Well, fretting over Borat is not the plan,” Wallace says. “They misrepresented everything about me.”