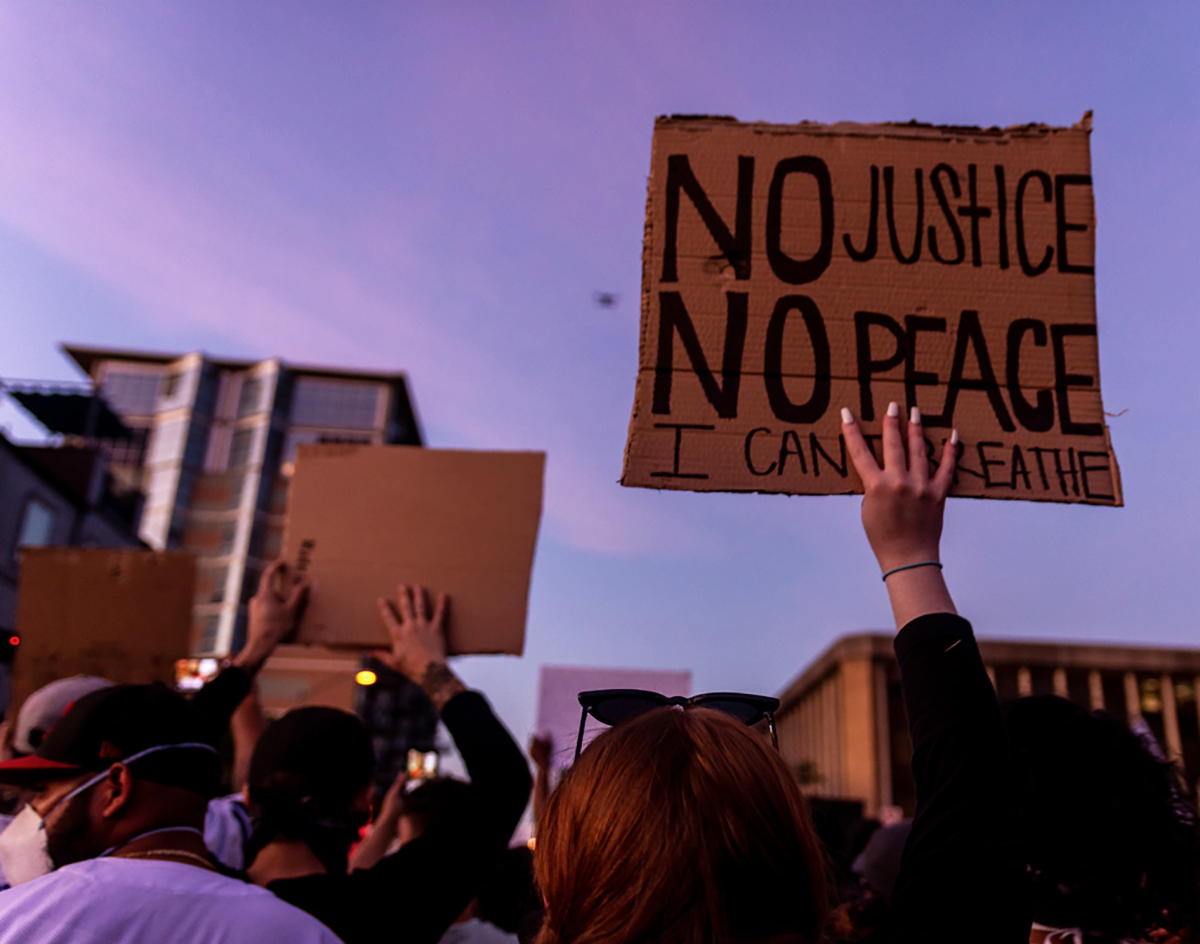 We Asked Some Of Dallas’ Most Noted DJs About Their Personal Favorite Soundtracks To The Defining Moments We’re Living Through.

The death of George Floyd at the hands of four Minneapolis police officers ignited protests across the country like wildfire. As protesters rally for change once again, we remember the countless struggles throughout our nation’s history and the soundtracks that accompanied those calls for change. From “Strange Fruit” recorded by Billy Holiday in the ’30s to protest lynchings, to “We Shall Overcome” in the ’60s at the height of the Civil Rights Movement, to “Fuck the Police” in the late ’80s in response to police brutality, there are many iconic tracks that remind us of the injustices people of color have faced in this country. Even our own hometown hero Leon Bridges recently dropped his own protest song called “Sweeter.”

Unfortunately, not much has changed as history once again repeats itself long after Rodney King and the L.A. Riots. As such, a new crop of contemporary protest songs have been recorded in response to the repeated acts of police brutality and racist murder cases resulting in the deaths of Black Americans like Ahmaud Arbery and Trayvon Martin.

Protest music in the United States stretches back as far as the Civil War, and will continue as long as oppressions leaves fractures in our society. So, as DFW residents continue to take to the streets, we thought we’d ask local DJs about their favorite protests songs for a soundtrack to the movement.

“This song was inspired by the events in 2014 in Ferguson, Missouri following the shooting of Michael Brown, an 18-year-old unarmed man who certainly didn’t deserve to die at the hands of those who are supposed to protect us. In this song, every single line speaks relevant, powerful truth. Lauryn Hill sings ‘Black Rage is founded on two-thirds a person/Rapings and beatings and suffering that worsens/Black human packages tied up in strings/Black rage can come from all these kinds of things. Black Rage is founded on blatant denial squeezing economics/Subsistence survival, deafening silence and social control/Black rage is founded on wounds in the soul.’ We are still facing these same issues today and have for as long as I can remember, with police brutality. At the beginning of the protests following George Floyd’s death, there were a few days of actual rioting and looting, which I don’t condone in any way. But being a black woman, I walked into a business simply to pick up some food I ordered, and was asked by a white man why all of this was happening. My response was a simple one, but if I could go back, I would encourage him to listen to this song. It represents our cries of demanding change. We as a race, are tired of senselessly losing people and loved ones simply because of the color of their skin. We should not have to worry every time our mother or father, sister, brother, cousin or friends leave the house in fear of them possibly not coming back. We should not have to worry and fear the worst every single time we get pulled over for a simple traffic violation. It has now become a “thing” to record arrests being made because we aren’t allowed to help in the act of witnessing the unjust and violent actions the police tend to use against us. This song explains our ‘why’ and this is why I chose this as my favorite protest song. Not to mention when Lauryn Hill opens her mouth, I am immediately drawn in, and she makes you want to listen to her. Black lives matter. We matter.”

Eddie Palmieri – “Everything Is Everything”

“Everything is everything” by Eddie Palmieri off his 1969 album Justicia, which is a concept album revolving around social justice. It’s a driving, soulful jazz tune and the lyrics are basically, “society tells us ‘everything is everything’ about justice.” Meaning, it is what it is. But if you ask a Black or Latino person about justice they’ll tell you it’s not so. It was true in 1969 and sadly it still rings true now. Palmieri says the idea of justice is so simple and beautiful, if only the world would realize it. “Everything will be everything… with real justice.”

“This song resonates deeply with me on many levels. The title is what I see as the battle cry for my generation in terms of social justice issues. I’m hoping that through this all, the literal and figurative meaning of this battle cry doesn’t get lost in translation. H.E.R. poses meaningful, direct and poignant questions that deserve answers of reform on every level. I just really like the intricate balance of depth, raw emotion, timeliness and artistry of this song.”

Rage Against The Machine – “Killing In The Name”

“This song came out in 1992, and it addresses an ongoing issue that’s affected Black people for hundreds of years, and unfortunately it’s still as relevant today as ever. The misuse of power, money, corruption and racism of Law Enforcement has got to cease. Defund the police.”

“I’m stuck at a crossroads of which song to pick. “Song 33” by Noname was my first reaction because it’s a black woman’s commentary on what we have to deal with everyday — fighting for people who won’t fight for us. The other one is Get Up, Stand Up by Bob Marley because I’m admittedly a new fan and heard this song for the first time a day before Breonna Taylor died. It made me feel like the fight should continue and then 24 hours later, reality settled back in. But the struggle will always be there and until it’s not — we have to fight.”

Style Council – “Walls Come Tumblin’ Down”
“Walls Come Tumbling Down has everything a great modern protest song needs: A direct, clear message, an uplifting energy and a chant-style hook that makes you feel empowered when you sing it. Lyrics like “Governments crack and systems fall, cuz unity is powerful,” with that horn section, and that 4/4 snare banging away is absolute perfection. I’ve never listened to this song less than twice in a row. And although it’s a wonderful jam musically — it’s a fun sing-along vocal — there is no mistake that Paul is singing about uniting and rising up against the system.”

“There’s a lot going on in the world, but people’s eyes are finally beginning to open.  “Alright” by Kendrick Lamar is like the perfect protest song. All this change we are experiencing has not been in vain, and I’m really hopeful that some way, at some point down the line, we are actually ‘gon be alright.”

“Picking a favorite protest song is difficult. My favorite protest song varies and is a reflection of how I am feeling in that moment. Sometimes I feel hopeful and sometimes I feel anger with everything in between. At the moment, the one song that has been playing over and over in my head is Lil Baby’s recent release , ”The Bigger Picture.” To see one of hip-hop’ s youngest stars use their platform to speak to their generation and others gives me hope.”

“This tune was created in the wake of the killing of George Floyd.”

KRS One – “Sound of da Police”

“This song outlines how the police system still does unethical, racist shit in the most raw way, and on a crazy beat.”

“Detroit has a long tradition of revolution through music from Punk Rock with the MC5, to the renegade techno of Underground Resistance. This modern classic from Detroit Techno vets Scan 7 is a perfect calling card to join the fight against oppression. The opening line says it all: ‘If you can hear this you are part of the resistance.’ Check out the Blixaboy 214 Recode.”

Cover photo by Carly May.
No more articles