This week, we chowed down on Heim Barbecue .

Overview.
Heim Barbecue has been making a name for itself in the Fort Worth barbecue scene for little over a year now, initially serving food from a truck, and just opening its first brick and mortar restaurant on West Magnolia Avenue this month. This family-owned barbecue joint may be young, but they smoke a brisket like the old pros.

“We take what we do really seriously and hopefully that shows in the food,” says Travis Heim, co-owner and pitmaster of Heim Barbecue.

This hip barbecue joint is dedicated to quality and the people can’t get enough. Heim is usually sold out by 4 p.m., so get there before the lunch rush inevitably wipes them out.

Some History.
Heim Barbecue started in the backyard, but it was Travis’ passion for barbecue that brought Heim out of the backyard and on to the table.

“He always had a thing for barbecue,” says Emma Heim, co-owner, business manager and Travis’s better half.

Travis and Emma received a little Weber grill as a wedding gift and they put it to good use pretty quickly. Travis started cooking briskets on it, and soon realized that the little Weber wasn’t enough and set out to get a smoker of his own. It just so happened that his uncle had one he was willing to part with and just gave it to him. But the smoker was so large they couldn’t park it at their house, much less cook just for themselves on it. So the Heims started smoking for friends and family, at parties, and pop-up events they called Meat Club. This got so popular they started having Meat Club at least once a month.

“In the back of our mind we have always kind of wanted to do a restaurant,” Emma says.

So that’s just what they did. The Heims soon found a food truck for lease online and put everything they had in to it.

“We ended up using all of our money to pay for the deposit for the truck,” Emma says.

On February 21, 2015, Heim Barbecue opened. The food truck they leased had a permanent home at the Republic Street Bar and they were only open on Wednesdays. At first they were make just enough to cover the expenses, but they were selling more and more each day, so they started opening more days. After receiving their first big review, however, business exploded. Emma quit her job, and a little over a year later, the Heims opened their first brick-and-mortar location.

The Pitmaster and His ‘Cue.
Travis Heim has been into barbecue for a long time — since before he could drive, even.
“Since I was 12 or 13, I’ve been cooking for fun,” he says.

When he was younger Travis and his grandfather would cook out on the grill a lot and it was around this time he came up the recipe for the barbecue sauce that use in the restaurant today. But barbecue wasn’t what he set out to do in life, however, one day after losing his job, Travis realized that it was something he had a passion for.

“It’s kind of like you don’t really think you care about it, and then you just wake up one day and you’re like, ‘Oh, I’ve been doing this my whole life,'” he says.

It wasn’t until the Heims started Meat Club that the Idea of a restaurant really began to form. After that, Travis and Emma strived to prefect their barbecue. At that time, they say, it was all about experimenting and constantly improving things.

It was during a Meat Club event dubbed “There Will Be Bacon” where they inadvertently crafted one of their best selling items the menu, the bacon burnt ends. Theses bite-sized bits of smoked pork are coated in a rub that has a perfect balance between spicy and sweet.

By the time Travis and Emma opened the new Heim Barbecue they had done some traveling around the country learning about good barbecue.

“Every single aspect of what we do we have planned out,” Travis says of their farm-to-smoker approach.

Every cut of meat they get is farm-raised and hormone free, and that shows in the quality of the brisket. The bark is full of flavor, the smoke ring is perfect and every bite is juicy. All the sides are made daily and are either a family recipe or one of Emma and Travis’ original ideas. It wasn’t until after opening did the Heims finds out that their surname means “home.” It’s something they’ve since taken to heart.

“We try to take a more enlightened approach to hospitality,” Travis says. “Barbecue is very much a communal thing.”

And the community loves Heim Barbecue. They smoke over 1,000 pounds of barbecue a day, and it’s typically all gone by mid-afternoon. You’ve got to get there pretty early to snag some of those bacon burnt ends, or any of the other offerings from Fort Worth’s best barbecue joint. 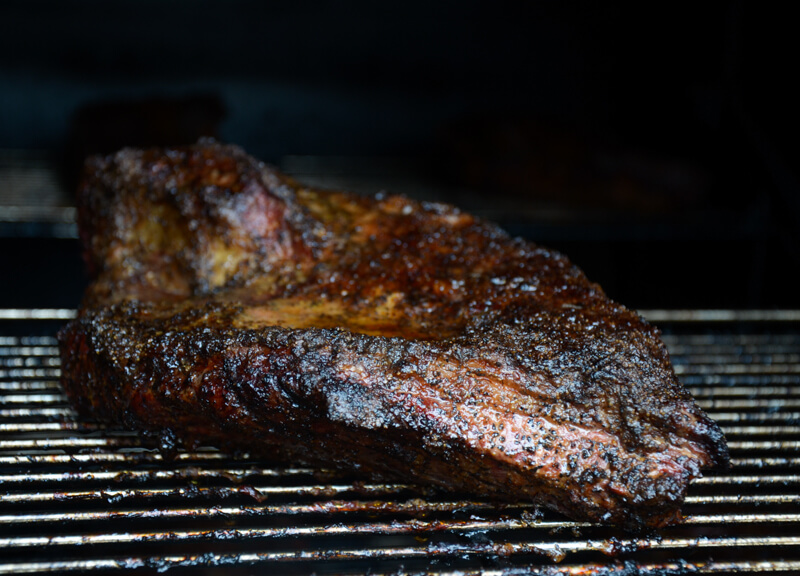 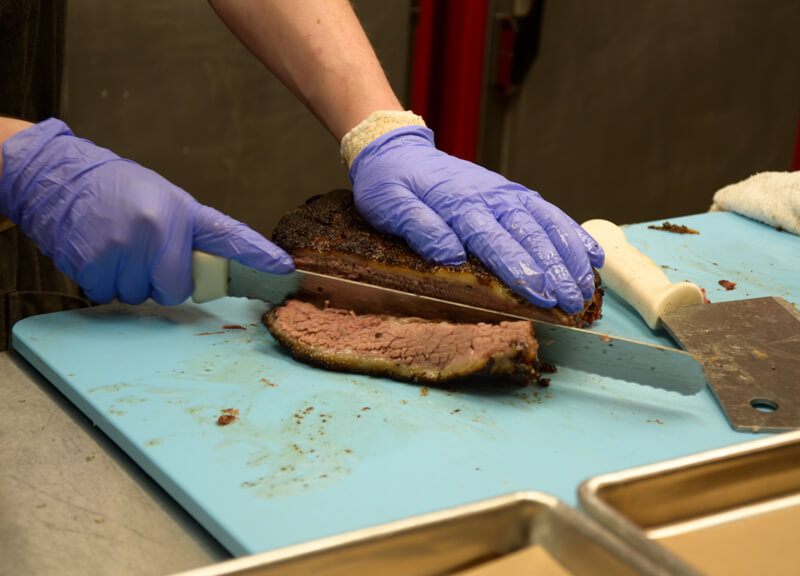 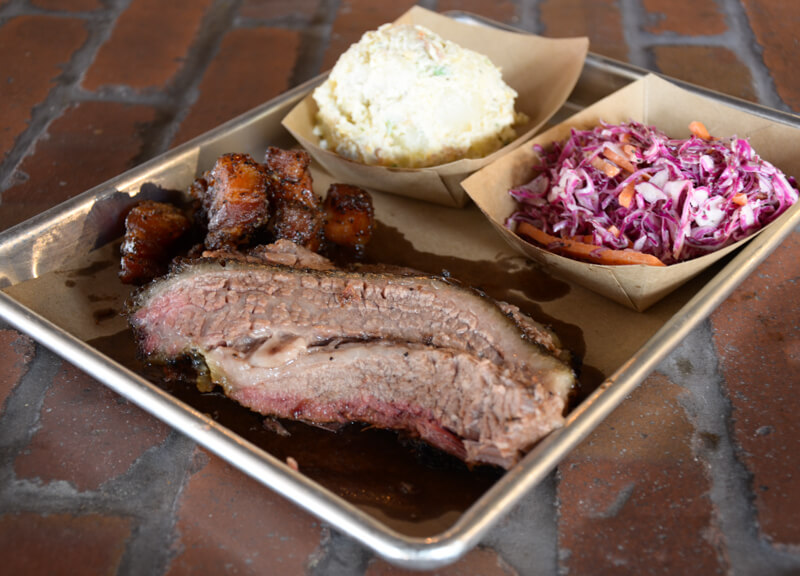 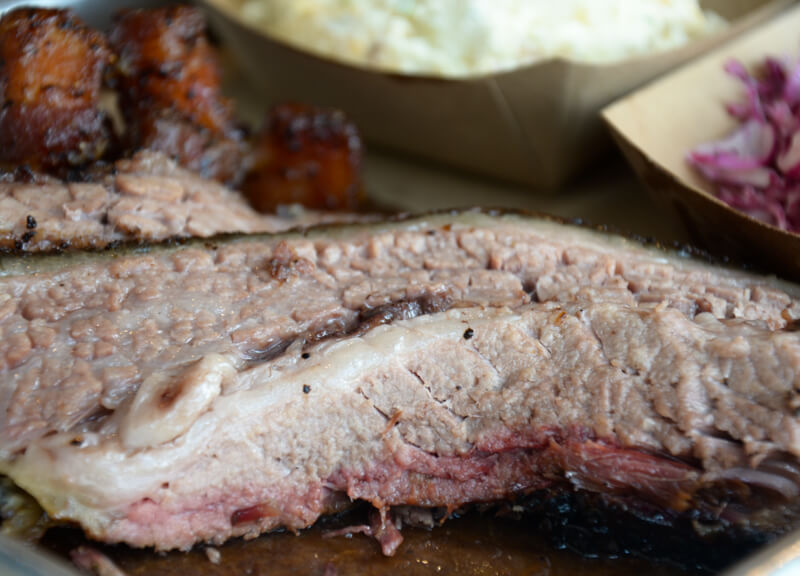 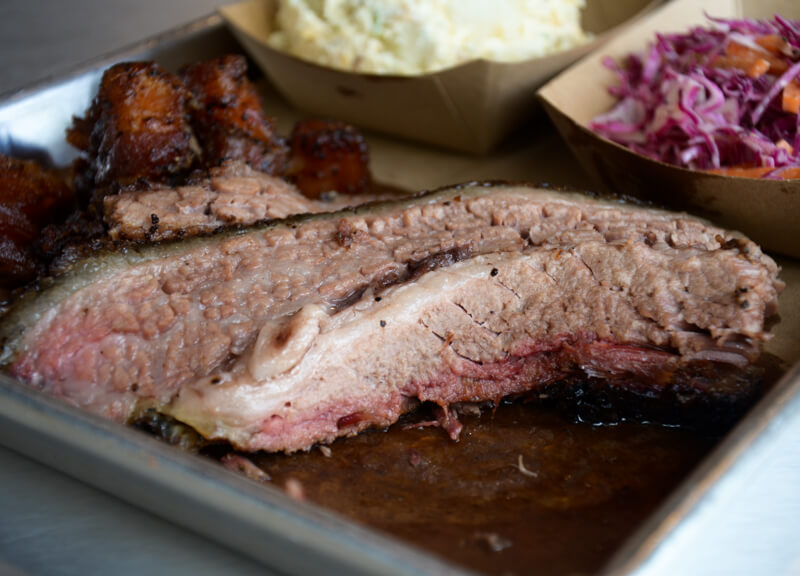