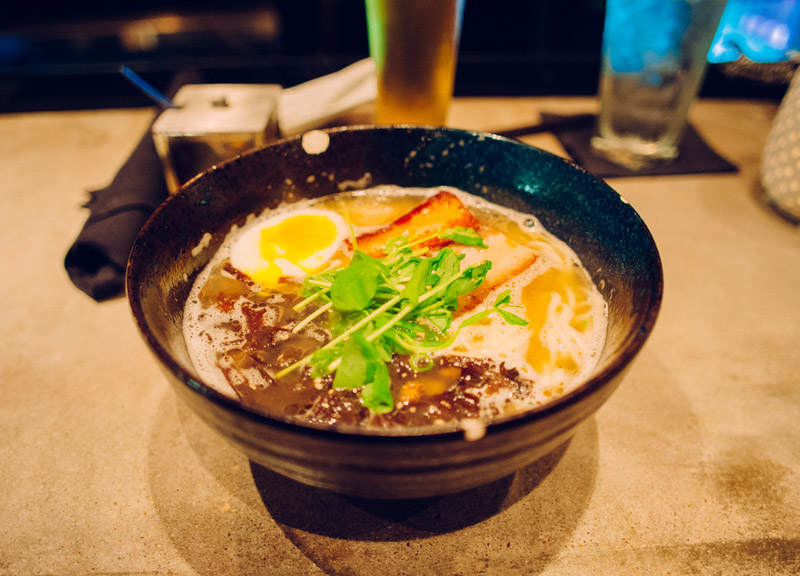 It's great that ramen has finally begun to have it's moment in the sun.

Sure, there have been a handful of Japanese restaurants in town where you've always been able to get some — and, absolutely, it pops up as an occasional special here and there — but, all in all, this isn't much of a town for finding yourself face first in a bowl slurping noodles.

Tanoshii Ramen opened up about two months ago, though, hoping to change that. And, to date, the spot has been incredibly well-received. In the restaurant's first two weeks of operation, people waited upwards of two hours just to get their first tastes of Tanoshii's offerings.

And, to be sure, Tanoshii rocks on more than a few fronts. The food looks amazing, the service is great and the restaurant does a great job making the place look cool.

The problem is that Tanoshii just doesn't stack up when it comes to its ramen bowls' authenticity and quality.

There's no need to recite some boring laborious history of the style of the food here, but suffice it to say that Tanoshii just does a mediocre to poor job of filling its bowls with broth and noodles.

The Tonkotsu broth — usually a pale, opaque, milky color — is very shallow in flavor and lacks the richness and snooze-inducing fattiness of the real deal. The Shoyu broth — a soy- and meat broth-based soup — doesn't boast the proper yin and yang of salty and tangy flavors.

See, there's a difference between a deep, salty, fermented flavor and just using too much salt in your broth. As a result, you'll find yourself needing to use Tanoshii's provided condiments in order to fix up your bowl proper.

But here's the worst part: The noodles, which are the most integral part to a good bowl of ramen are made in-house daily at Tanoshii, are just sorely lacking. They don't have the chew and heft that ramen noodles are expected to have.

Traditional ramen noodles are served very al dente and highly alkaline, boasting a very specific color and texture. They are crafted to work with both the broth and the ingredients in a given dish.

But the noodles that come with Tanoshii bowls are frail and pale.

Itâ€™s good that people are enjoying it, sure. Ramen is, on the whole, pretty great.

But hopefully the success of Tanoshii will open the doors for other ramen shops to open in these parts in the future. And hopefully some of them will focus a little more on the quality of the bowls they are producing.