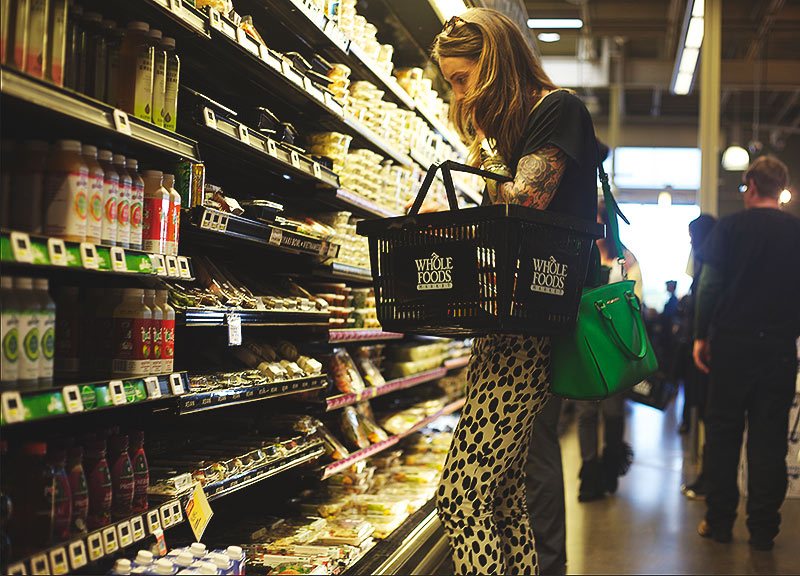 Once upon a time, a simple out-loud aside — “I can’t decide what kind of ice cream to
get!” — actually sparked a short romance between me and a fellow shopper in the frozen foods aisle at the Kroger off of University Drive in Denton.

Crazy, right? I mean, who knew that grocery stores could be such a prime setting for finding love?

Well, it makes sense, actually. If anything, people show their true selves at the super market. What they put into their basket, what they wear, how they act — it’s all pretty real, if only because, hey, everyone buys toilet paper.

But there are other benefits — like, namely, how to average grocery shopper probably isn’t falling-over drunk like they might be should you find them at a bar or a nightclub. Plus, a shopper in cycling spandex and walking around with a basket full of green produce is just more likely to catch your eye more than someone wearing jeans and a t-shirt while sulking over a bar counter.

Also? It’s easier than you think it might be to strike up a conversation in this food-shopping setting.

“Oh! Yeah! I’ve been hit on at least three times in the produce section — guys asking for my number and stuff,” admits Audrey, a Plano Public Librarian who lives and shops in Dallas. “In my experience, grocery stores can have a lot of potential for meeting dudes.”

Is it a little awkward? Maybe. But what setting isn’t? Here, at least things can’t get too creepy. It’s too well-lit for that. Also? Most grocery stores, you might notice, boast security guards or cops at the ready at all times, all but guaranteeing that the real creeps are kept at bay.

Still, we managed to do some creeping ourselves in recent weeks. And now we present our thoughts on the area grocery stores most worth a second glance.

If you can navigate your way around the expecting mothers and mothers already with children, there seems to be a nice mix of young business professionals at this Whole Foods location in Lakewood. And maybe even some single dads roaming the store, too.

At first, it’s mostly overwhelming to see just how many parents with children there are here. But, honestly, that’s probably on us; our stop-by time was prime dinner hour, and most of these mothers seemed to have just picked up their kids from daycare or after-school programs.

But, after some shopping and browsing, other seemingly single people came into view. These folks were, to a T, business professionals. Men and women alike, most likely stopping by on the way home to visit the salad bar for a quick meal, still donned their day workplace attire. Guys were dressed in slacks and blazers. Women were dressed in skirts and blouses. Still, some bared tattoos — even full sleeves — that would catch anyone‘s wandering eye.

Higher populated areas of the store included the salad bar and neighboring pre-cooked meal section, as well as the wine bar and breakfast cereal isle. I guess everyone — especially a single person working 9 to 5 — needs an easy meal.

My suggestion? Catch up with someone at the shelves of sushi and spark up a conversation about if store-bought sushi is actually any good.

Time of Visit: Noon on a Tuesday.
Average Customer Age (estimated): 30.
Average Customer Sex: Healthy mix.
Average Car in Parking Lot: All of the Toyota Priuses.
Overheard Phone Conversation Topics (included but not limited to): what kind of wine to buy, business calls.

Ah, the Park Lane Whole Foods and its bustling lunch crowd. If people at this spot didn’t always seem in such a hurry to get back to work, would may be one of the best places in town — of any type — to talk up a cute stranger.

Just look around: The salad bar, the juice bar and the pizza, sandwich and sushi stations are each always teeming with healthy people getting their lunch on. And most are pretty receptive to the free sampling station set up right in the middle of it all, too. Good news, as that’s about as great an opportunity for grocery store small talk as any.

“Why, yes,” you might say to that cute stranger nearby, “that locally brewed kombucha is delicious.” Or maybe “I think that sample lady is checking you out!” because, here at this spot, it sometimes happens to be true.

More proof that the folks here are single: The large amount of solo shoppers it the checkout lanes, and especially the express one. Long story short, it’s not a bad place to be stuck standing in line — if you don’t mind your conversation being cut short because the boss really wants that proposal on his desk by 3.

Young and friendly, the still-new Trader Joe’s spot on Lower Greenville has some of the best shoppers and employees in town. Seriously: Everyone here is happy.

Is it the low-priced and delicious private-label food on the shelves? Is it the neighborhood feel? Does it matter? Happiness is attractive. And it’s everywhere in this store.

Plus, the store layout isn’t the largest. Meaning? Bumping into someone — someone in a good mood, no less — can be a recurring thing here.

Also: Bonus points for the very queer-friendly conversation between two patrons and a cashier. “You two are the cutest couple,” the cashier said. And she was right.

Time of Visit: 9:30 p.m. on a Monday.
Average Customer Age (estimated): 35.
Average Customer Sex: Female.
Average Car in Parking Lot: Totally random, but nothing too fancy.
Overheard Phone Conversation Topics (included but not limited to): Absolutely nobody was on their phone here. Not a soul.

If you need beer and everything else is closed around the Lower Greenville area for the night, hit up Sprouts. As opposed to most other stores in the area, which tend to shutter their doors nightly at 9 p.m., this one doesn’t close until 10.

So no surprise: Beer’s probably the top purchase at 9:30 on a Monday. And most of the shoppers at this hour are in the beer section, indecisively staring at the selection for a considerable amount of time.

Another popular area of purchase at this Sprouts? The produce section. In fact, it’s so popular that showing up at the checkout line with frozen meals could be downright embarrassing when the person behind you shows up with a basket full of greens.

So don’t do that. Not here, where the patrons actually cook their own dinners rather than seek out a half-priced meal deal at a restaurant nearby. Instead, appreciate that gold. I mean, what’s nicer than someone who would take the time to save money, go to the grocery store, buy produce and cook dinner?

Located right next to L.A. Fitness, this Kroger on Haskell can be quite the hotspot. Sometimes literally, too. About 90 percent of the customer base is dressed in athletic apparel and still steaming from a just-finished workout.

Like the athletic type? This is spot is basically made for you — and especially if you’re a Single Lady looking for a Single Dude.

I mean, really: Nothing screams “Single Dude!” louder than a grocery cart full of dog food, soda (diet) and chips (baked). Dudes shopping together? This place has those, too. And, sure, bros that work out together and shop together may also be bros who live together, but they’re also probably bros who wing men for each other.

And they’re all over the place. There’s no particularly popular part of this store, but the craft beer section sure generates a lot of foot traffic.

So, grab one of those L.A. Fitness “free three days of work out” vouchers from the front of the store, then get to creeping.

Business was rather slow at the corner of McKinney and Lemmon at 6:30 p.m. on a Tuesday, but, of the handful of shoppers on hand, the ratio of attractive to ordinary-looking people was absurdly high. Just pulling into the parking lot, more than one well-dressed (albeit casually) male could be spotted. Indoors, more females mixed in, and, real talk, they were all model-worthy.

It should be noted that this spot features an incredibly refreshing mix of people. Queer, genderqueer, straight — they all abound. Surely, this location, just south of “The Gayborhood,” makes it a prime spot for a little more than your average heterosexual mom shopping for fruit snacks with her kids. But, seriously, all types were represented, including the token elderly man in the toiletries isle who was mumbling to himself about which toilet paper brand to purchase. Also, for whatever it’s worth, there were more dads shopping with kids than there were moms.

No, Albertson’s has no wine bar like its Whole Foods competition does. But it has a Starbucks that works well as a conversation spark-up spot, and most of the many solo patrons shopping here has at least one bottle of wine packed into their carts. I even saw one guy buying a bottle of red wine and about six packs of organic chicken breast — and that’s it.

Talk about a store where the customer knows what it wants. 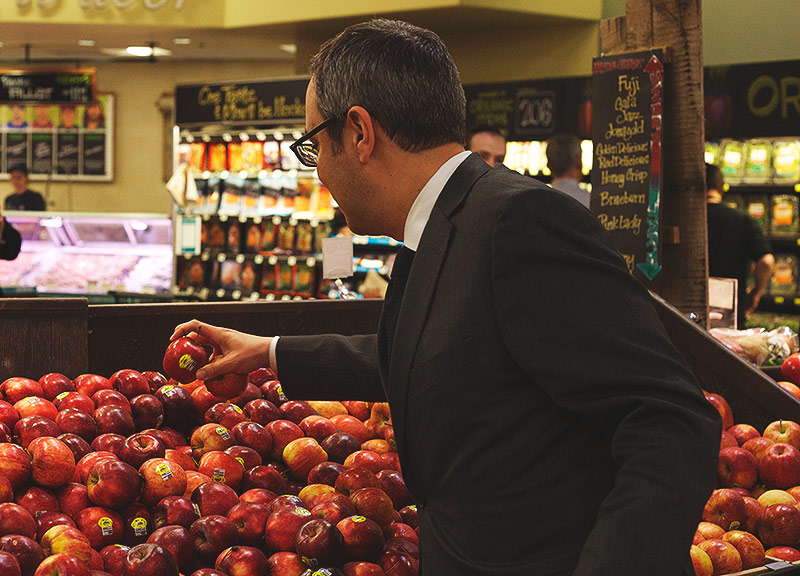 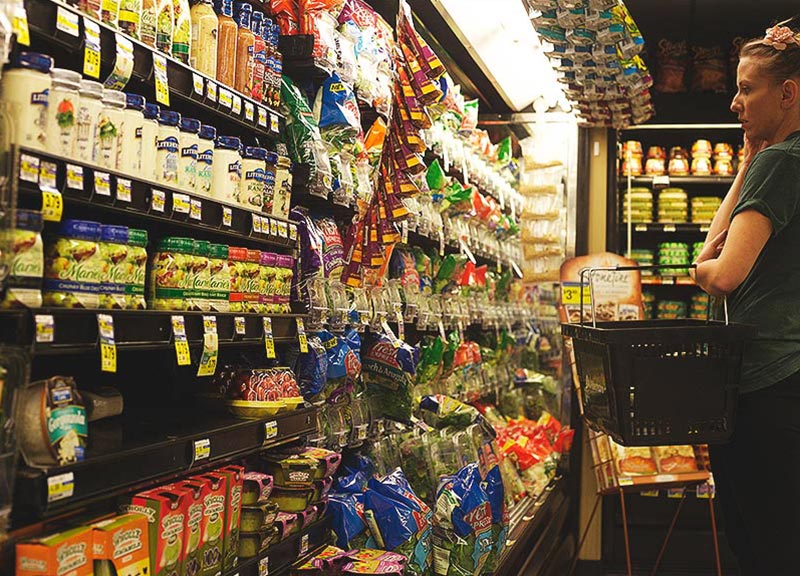 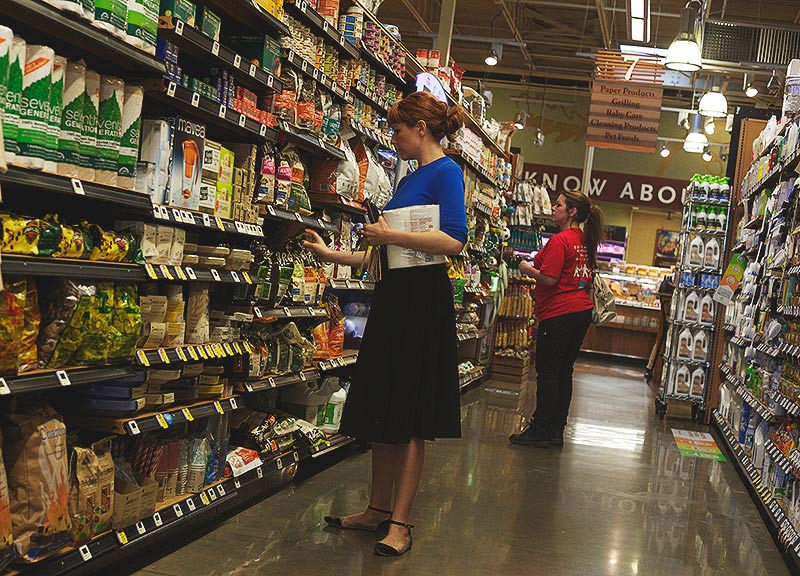 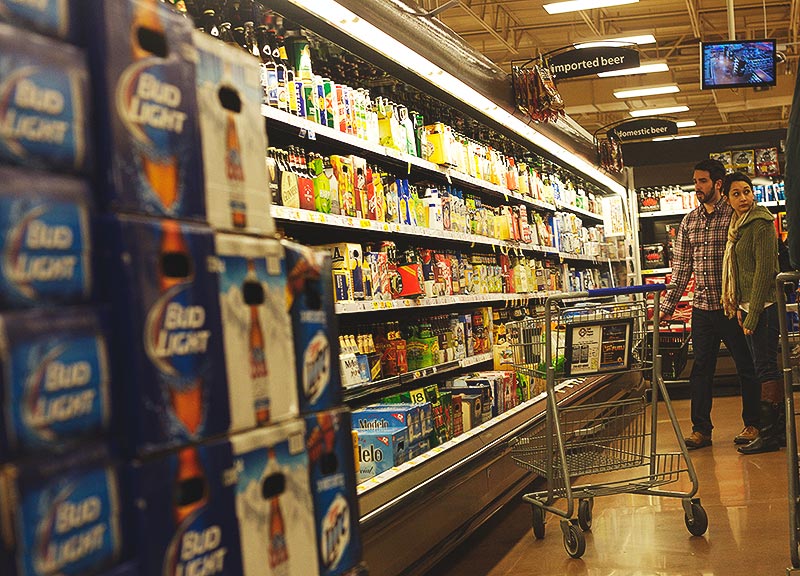 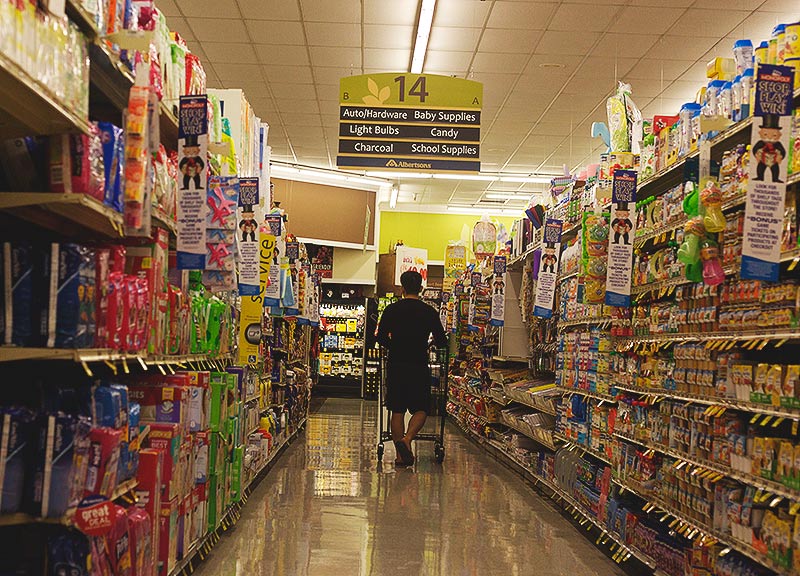