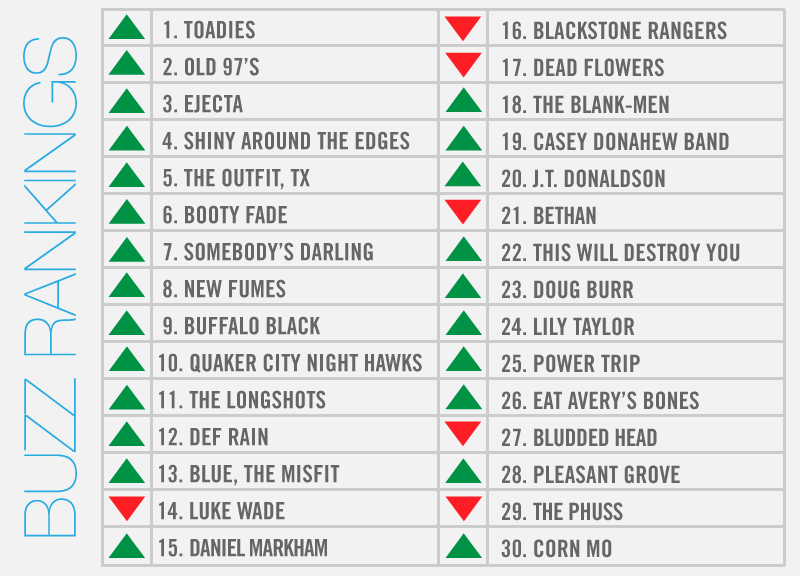 This Week, It Was All The Toadies, All Dia.

A quick perusal of our archives would tell us that we've mentioned the Toadies in something like 70 articles thus far in 2014. That's as good an indicator as any as to the monster year the band has experienced as it's been celebrating, among other things, the 20th anniversary of its seminal Rubberneck album.

And all of that build up has been leading up to this weekend, too, as the band hosts its 7th annual Dia de los Toadies festival that'll see the band performing a mostly acoustic set on Friday night and then, for the last time this year at least, playing Rubberneck front-to-back on Saturday.

With that Panther Island Pavilion-hosted affair on the docket, there was little doubt that Toadies would top our local music power rankings this week for its fifth time overall.

Appearances at that festival also helped the Old 97's, The Longshots, Pleasant Grove, Somebody's Darling, Quaker City Night Hawks, Doug Burr and The Blank-Men land spots in the Rankings as well. Additionally, the 97's were helped out by frontman Rhett Miller's performances at Monday's Do It For Durrett benefit, at tonight's birthday bash at Twilite Lounge and at the festival's Friday night acoustic show.

Other performers also earned top spots thanks to big shows coming this weekend. To that end, North Texas expat Ejecta will perform at Friday night's Gorilla vs Bear IV showcase, and The Outfit, TX, Blue, The Misfit and Buffalo Black will all help open up tonight's Red Bull Sound Select showcase at Trees.

The big stories from the week, meanwhile, also included New Fumes and Def Rain's involvement in the Flaming Lips' upcoming Beatles tribute album, Shiny Around the Edges frontman Michael Seman's discussion on local music scenes' role in a city's economic development with the Washington Post and The Phuss' new video.