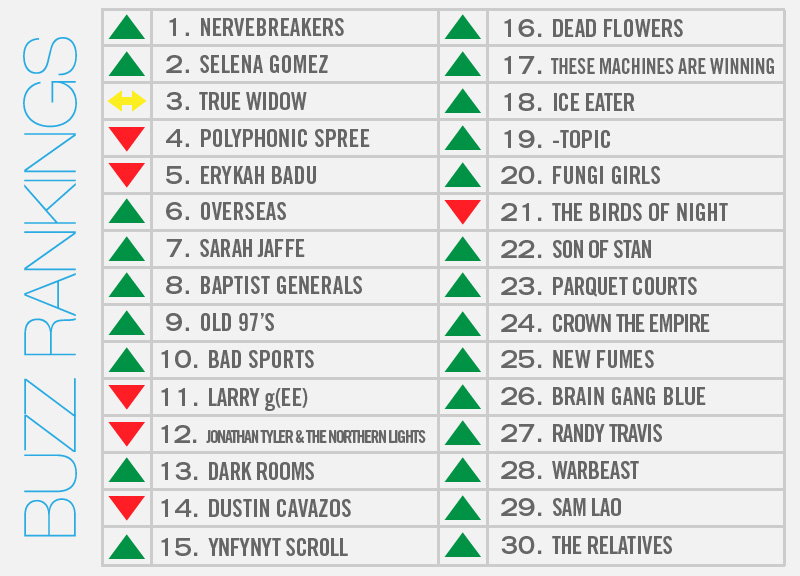 Last weekend, the legendary Dallas punk outfit The Nervebreakers reunited for a show at Dada. Unlike previous reunion shows that have happened since the band ended its initial run in 1980, last weekend's performance featured all five original band members.

Even better? It's looking like it may not have just been a one-off thing after all. Get Hip Recordings — the Pittsburgh label that recently re-issued a collection of the band's singles, first LP, and b-sides as a compilation called Hijack The Radio — has announced the band is back in the studio these days working on a batch of never-before-recorded material. And while the band has opened for bands like The Clash, Sex Pistols, and Ramones in their past, they did manage at least one new accomplishment this week: topping our weekly Buzz Rankings.

A close second this week was Grand Prairie native Selena Gomez, who accomplished quite a feat of her own this week. When Gomez's new Stars Dance album knocked Jay-Z's Magna Carta Holy Grail out of the top spot on the Billboard 200 this week, she became the first female solo artist to top the chart this year. According to Yahoo!'s Chart Watch blog, this is the latest in the year we've gone without a female solo artist topping the chart since 1992, when Whitney Houston's The Bodyguard didn't top the chart until December. Coincidentally, as Yahoo! was also astute enough to point out, that's the same year Gomez was born.

Also doing quite well for herself once again this week was Erykah Badu, who has had something of a hot month as far as the Rankings are concerned. A big part of her streak can be attributed to her involvement in Dallas' inaugural Red Bull SoundSelect event. And, to her credit, Badu put on a rather inspired performance over the weekend at Prophet Bar. That show's openers, Larry g(EE) and Dustin Cavazos, earned themselves a little additional shine this week as well.

On that front, These Machines Are Winning, Ice Eater and Son of Stan find themselves on this week's list after having been announced as the performers at the next SoundSelect event, which will come August 15 at Three Links. Other big show announcements this week? Parquet Courts announced they'd be opening for the Pixies at New York's Bowery Ballroom. Also? Dead Flowers and Dark Rooms were added to next month's Untapped: Dallas festival.

Elsewhere, locally-tied indie-rock supergroup Overseas come to town this weekend for a pair of shows, Bad Sports released the first single from their upcoming third LP via Pitchfork, The Relatives were named “Best Music Act” in D Magazine's “Best of Big D” issue and Jonathan Tyler and the Northern Lights played a secret show at Double Wide.