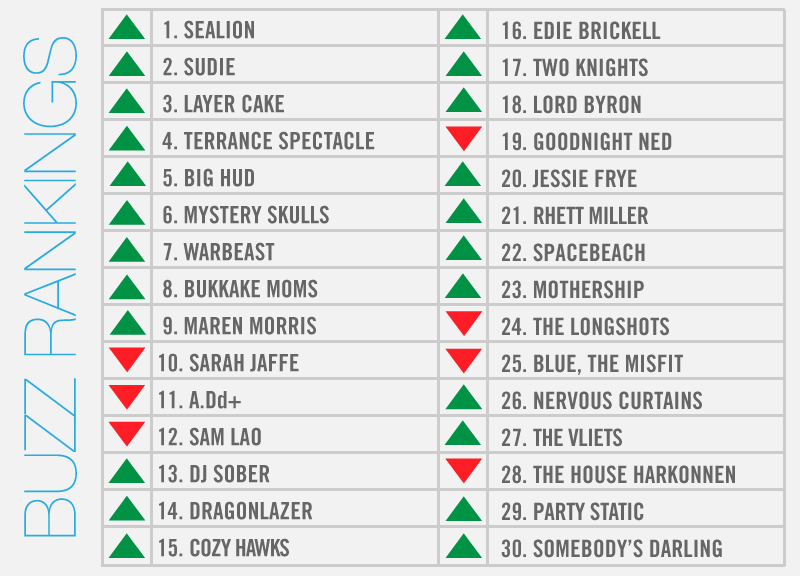 This Week, Sealion Got A Fizzy Lift.

We recently wrote that after four years of peppering Deep Ellum with its stickers — not to mention its increasingly blistering live shows — Sealion's brand of margarita punk has become “one of the neighborhood's most stabilizing forces.”

It's somewhat remarkable, then, that the quartet has somehow never managed to top our Buzz Rankings in over two-and-a-half years of our keeping track.

By all accounts, though, Sealion had a hell of a week: The band released its much anticipated third album, Heavy Fizz; it stole the show at last Wednesday's Sound Select show; and it even headed out on tour.

We aren't the only ones that think Sealion had reached new heights this week, either. In its own review of that Sound Select show, the Dallas Observer's H. Drew Blackburn wrote that “as mighty and as badass as JEFF the Brotherhood is, the champions of the evening were Sealion, a Dallas-based surf-punk-garage outfit. They completely tore the roof off of the place with their youthful, melodic and agile set. It's almost like they were having more fun than the crowd, but this cannot be the case, because a 10-year old hopped on stage and danced around and sang. Eventually, he made his way around the room crowd surfing. As a rule of thumb, when a 10-year old crowd surfs at a rock show on a summer night, it is a momentous occasion.”

Also? In his review of Heavy Fizz, the Star-Telegram's Preston Jones “one of the year's best.”

It was nearly just as big a week for Dallas' Sudie. The singer and producer received loads of buzz this week thanks to her performance at D Magazine's “City Under the Influence” event this past Thursday. In their own recap of the event, that magazine's Christopher Mosley wrote that “Sudie is as every bit as talented as has been reported. She has a crowd-pleasing ability to carry a note to improbably soaring heights.” That said, we expect great things from her debut EP, which Sudie also announced this week would drop in August.

Also due out in August is the new one from Terrence Spectacle, who earned himself a feature this week in the Observer. Layer Cake, meanwhile, released its new EP at its farewell show, and earned itself heaps of praise in the process.

Elsewhere: Maren Morris co-wrote a song on Tim McGraw's upcoming record, Edie Brickell is coming home to perform with Steve Martin this weekend and Warbeast is headlining a big one at Gas Monkey Bar & Grill.