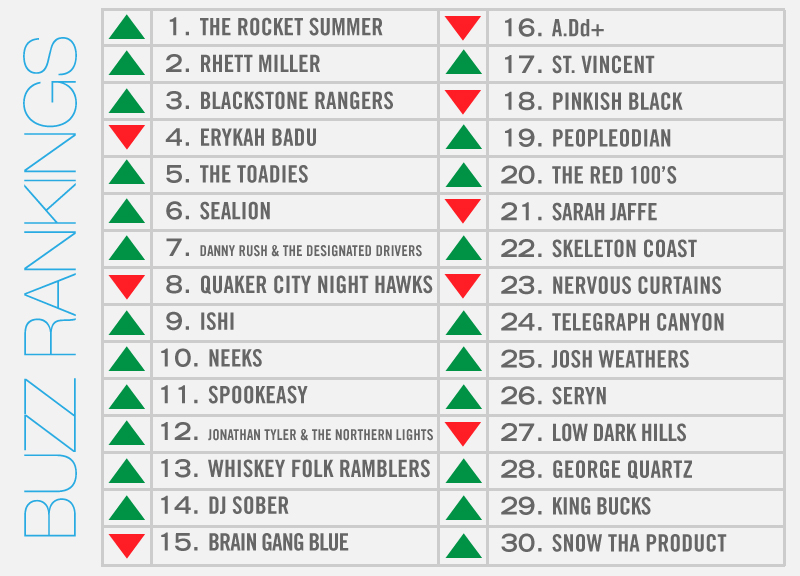 You Got So Much Love For The Rocket Summer.

Last week, Colleyville product Bryce Avary released Life Will Write the Words, the fifth full-length released under his The Rocket Summer moniker since 2003. This weekend, he'll celebrate that album's release locally with a headlining slot over at the Granada. Judging from his rabid base of teen fans the show is sure to be quite the madhouse. So, too, should Rhett Miller's in-store at Good Records later this afternoon in celebration of his own fifth solo studio full-length, The Dreamer.

So it's of little surprise, then, that these two well-known entities top this week's list of buzzing local music acts.

More surprising, perhaps, is the third-place ranking of the Blackstone Rangers, who have been playing all over the place since releasing their debut EP last weekend. But they've been gaining fans all along the way — and plenty of local press coverage to go with it.

The Toadies, whose last in-town performance was in Denton, rank well, too. That's surely because they're headlining The Palladium Ballroom on Saturday along with openers Sealion and The Red 100's, each of which found a spot in this week's rankings. The Solar Powered Music Festival out in Fort Worth is also going down Saturday, helping Ishi, Jonathan Tyler & The Northern Lights and Whiskey Folk Ramblers rank fairly well this week, too.

Lower on the list, Danny Rush and The Designated Drivers make an appearance because of the promotion surrounding their album, which we previewed earlier today. That disc earns its release on Saturday night with a show at Dan's Silverleaf that will also feature Warren Jackson Hearne & Le Leek Electrique and fellow vote-getter New Science Projects.

DJ Sober's set at Beauty Bar next week, which has become part of a Dallas Observer bar crawl event, helped the popular record-spinner make the list yet again.

Meanwhile, the release of the first single from the long-awaited St. Vincent/David Byrne collaboration was released earlier today, along with an announcement on that album's official release date. Had that news come any earlier, there's little doubt that St. Vincent would've ranked even higher this week.