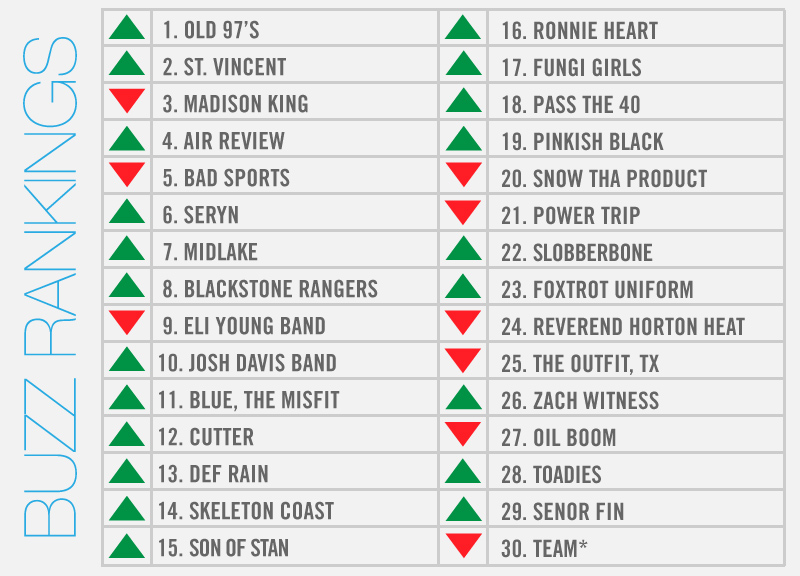 This Week, The Old 97's Messed Around.

In case you've somehow missed the dozens of interviews and feature stories — both local and national — on alt-rock pioneers and Dallas luminaries the Old 97's these past few weeks, just know one thing: In roughly a week and a half, Rhett Miller and Co. will release their tenth studio LP.

For their part, the drunken singalongs that make up Most Messed Up indeed find the band channeling the earliest — and, subsequently, rowdiest — period in its career.

And that's certainly a good thing. Good enough, anyway, to be called “genius” by the likes of The New Yorker a few weeks back.

We'll certainly have some thoughts of our own on the disc in the coming days, but like most songs in the band's catalog, we can't imagine this particular batch of songs sounding any better on disc than they will in a live setting. To that end, the Old 97's will perform the sucker in full at a hometown release show this Saturday night at Strauss Square.

Joining the band on that bill — as well as its sold-out show at Gruene Hall the night before — will be Madison King, who Miller recently called “Dallas' next great talent.”

It'll be a busy weekend for King, too, as she'll pull double duty Saturday with a performance at Good Records' Record Store Day shindig. Come to think of it, Old 97's guitarist Ken Bethea will be DJing at some point during that affair, too.

And the acts appearing in this week's rankings that aren't playing that party? They'll, for the most part, be playing at one area record shop or another's RSD party this weekend.

Also making national headlines this week were St. Vincent and the Josh Davis Band. While the former earned major props for filling Kurt Cobain's shoes and sitting in with the surviving members of Nirvana at its Rock and Roll Hall of Fame induction and post-ceremony club show, the latter earned itself reprimands following a years-long scam in which the band sold hundreds of counterfeit guitars to unsuspecting pawn shops in 18 states . It's safe to say that neither of these events will be quickly forgotten around these parts.