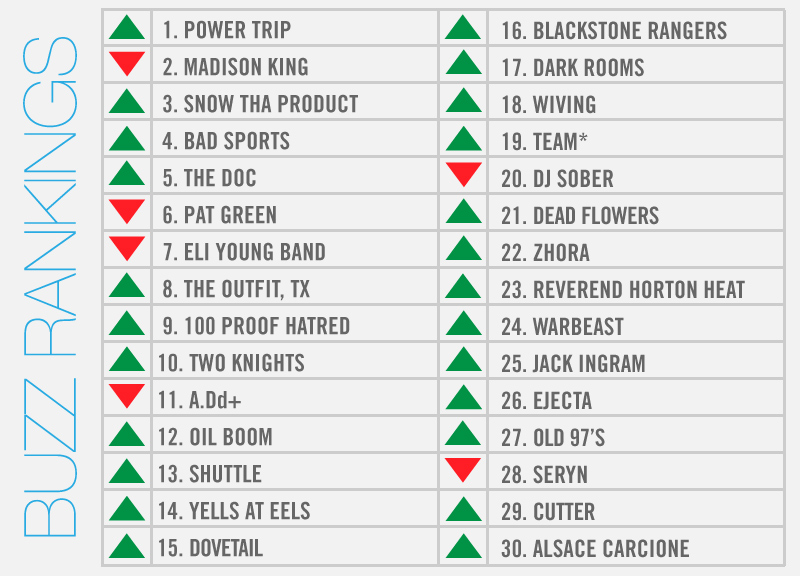 This Week, Power Trip Sold Out.

What's traditionally the most marginalized genre in local music? We've heard arguments from each of the hardcore, country and hip-hop sets in recent years. And, sure, there was probably a time when each of those genres were underrepresented in the local media or discriminated against by a handful of local club owners.

These days, though, that couldn't be further from the truth. Take the top third of the bands in this week's rankings, for instance, where country outfits Madison King and Pat Green, hip-hop acts The D.O.C and Snow tha Product, and hardcore heroes Power Trip represented their genres well.

But how did each those acts earn their spots this week?

Power Trip, who actually didn't show up on any PBS shows this week, have been selling test pressings, out-of-print shirts and other rare merch items via eBay to help its frontman Riley Gale settle some debts so he can move to Chicago in the not-too-distant future. As such, the band's headlining turn tomorrow night at Dada is reportedly one of the band's last — if not the last — before that move comes.

Meanwhile, last week's Buzz champ, Madison King, is still riding high of the release of her latest disc, which has gotten positive reviews from everyone and their dog. And, though it's been somewhat overlooked in the many reviews of Bruce Springsteen's free performance last Sunday, local import Pat Green also performed earlier on that bill.

On the hip-hop front, The D.O.C spoke at the premiere screening of new documentary We From Dallas earlier this week. As part of those remarks, the onetime creative force behind N.W.A. indicated that he believes the Dallas hip-hop scene will one day get its moment in the sun.

And you can look no further than part-time Fort Worth resident Snow tha Product for evidence that said day may come sooner than later. The rapper headlines a show at Trees this weekend.

Speaking of locals headlining Trees this weekend: TEAM* will pull off the feat on Friday. Other headlining acts from this coming weekend include Reverend Horton Heat at Gas Monkey, Bad Sports at Double Wide and Warbeast at Rail Club.

Elsewhere; Two Knights released its debut LP; Ejecta released a new NSFW video; The Slack reunited; and 100 Proof Hatred landed an Observer cover story, if, granted, for all of the wrong reasons.