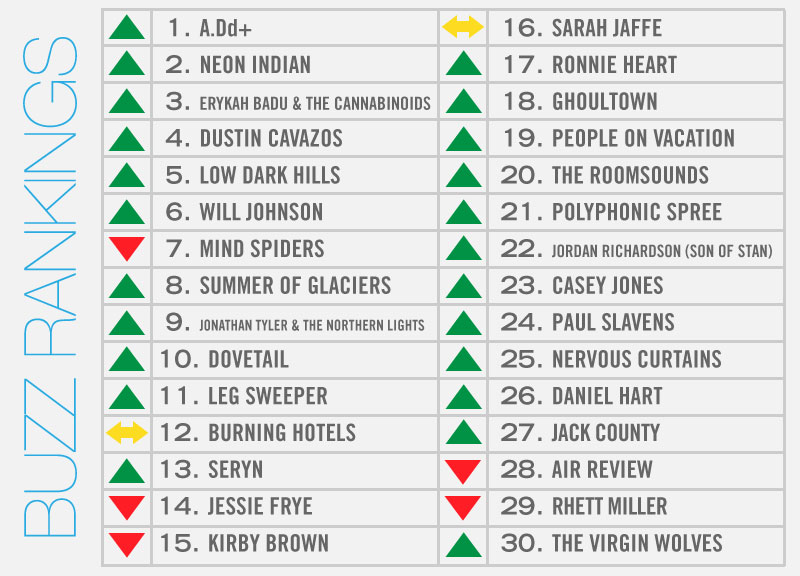 A.Dd+ Just Can't Come Down From The Top of Our List.

Seems like pretty much everyone agrees upon the fact that A.Dd+ is fairly awesome.

And, this week, the Observer's Nic Hernandez expanded on that fact, profiling the adored local duo with a full-page, music section feature.

That kind of attention — coupled with the fact that the duo had their South by Southwest performance called out by the folks at Pitchfork and the fact that the group is back on the road again with Black Milk — rightly bumps A.Dd+'s Peris Pershun and Slim Gravy to the top of this weekly list, and, somewhat surprisingly, for the very first time. It should be noted, however, that they may actually be the buzz rankings' most consistent performers since this series' launch: Only once has the group appeared lower than fourth in our rankings — back on March 8, when they placed sixth.

Following A.Dd+ are some heavy hitters: Neon Indian, who just triumphantly returned to town for a homecoming gig last week, and Erykah Badu and her Cannabinoids, who just released their first beat tape and performed with Nas at SXSW.

Rapper Dustin Cavazos, who the Observer's Daniel Hopkins is pretty sure he likes, shows up the highest he's ever shown on this list, thanks to a string of big-time shows around town.

Low Dark Hills, who play Dada this weekend before releasing their debut EP, show up fifth.

Meanwhile, Will Johnson continues to score well in our rankings, thanks to showing up in a million bands at the moment..

Denton's Summer of Glaciers is receiving some nice attention, too, thanks to a new music video. Kirby Brown and People on Vacation seem to be doing well for that same reason. Mind Spiders (new album),

Paul Slavens pops up for the first time, thanks to performing as part of The Baptist Generals, Salim Nourallah & The Travoltas and, y'know, that whole having his own radio show on KXT thing.

Jordan Richardson makes his debut because of the release of the first single for his latest project, Son of Stan. Same with former Neon Indian guitarist Ronnie Heart. Former American Idol contestant Casey James pops up thanks to a new album. And Ghoultown seems to have made it here solely on the novelty surrounding the fact that lead singer Count Lyle has a novel that's about to be published.

Lastly, both Dovetail and The Roomsounds pop up on this list for the first time, thanks to each band releasing new albums this coming weekend, and Seryn and The Virgin Wolves seemingly pop up here because of their announced participation in the Deep Ellum Arts Festival.