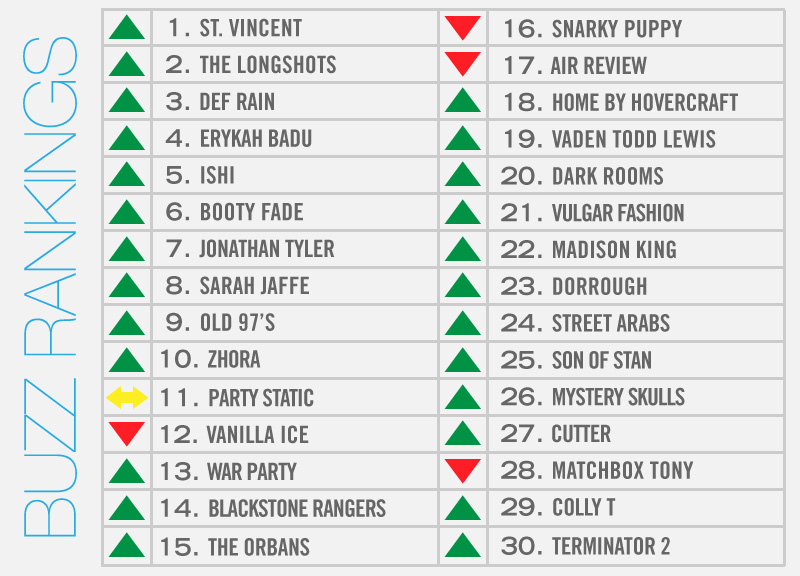 Dallas' own Annie Clark — better known to the rest of the world as St. Vincent — has been everywhere as of late.

That much should come as no surprise: She does have a new, self-titled release to promote, after all.

Also not surprising? How killer Clark's rendition of the album's single, “Birth in Reverse,” was when it was performed live on The Colbert Report earlier this week.

So of course all this this added exposure has helped Clark land atop our local music Buzz Rankings once again.

On the other hand, what is pretty surprising is the fact that, in two-plus years of these rankings, this week marks only the second time St. Vincent has finished in the top spot. More surprising than the fact that she eats peanut butter and jelly sandwiches, at least.

New releases this week also helped The Longshots, The Orbans, Parallel Play, Street Arabs, Blackstone Rangers and Def Rain all score some votes in this week's Rankings, too. The Longshots and Def Rain, in particular, each received praise in Impose magazine and a handful of additional national outlets for their efforts.

As far as the other acts on this week's rankings are concerned, it was live performances that earned most everyone else their places. For his part, Vanilla Ice indeed headed up the biggest party in town this past weekend. That same night, Party Static, Analog Rebellion, Matchbox Tony and Zach Witness helped us celebrate our second anniversary at Dada. Jonathan Tyler, meanwhile, joined Billy Ray Cyrus onstage last weekend, holding down lead guitar and backing vocal duty during “Achy Breaky Heart.”

This coming weekend, meanwhile, will see Ishi and Zhora sharing a stage for the first time since the latter's original members split from the former act to start up a group to call their own back in 2011. Also on that bill at Trees? Home by Hovercraft, which made some news of its own this week thanks to an interesting new project with Austin's Borrisokane.