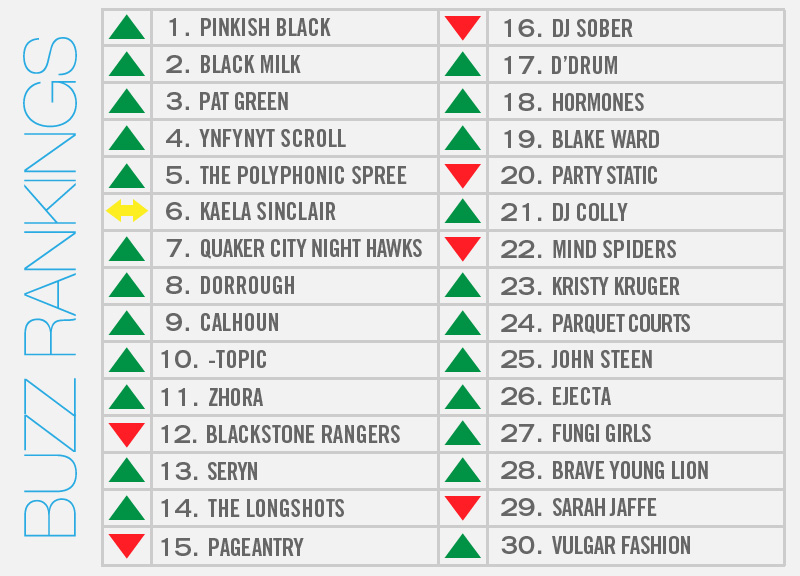 This Week, Pinkish Black Rose To The Top.

Since releasing its much-anticipated sophomore album last month, Fort Worth stoner metal duo Pinkish Black has been on something of a roll. In the past week or so, the band has embarked on a tour with Kylesa and racked up glowing reviews from magazines and websites all over the country. Some of most notable words of praise came from Pitchfork, who spoke well of the “stronger, more confident” Pinkish Black in its review of Razed to the Ground. And while that review expressed a level of surprise that the band could churn out such a strikingly metal effort while eschewing both guitars and anything that might be construed as riffs, it probably shouldn't be all that surprising at just how much the band has been thriving since signing its Century Media deal last year. It should be even less of a bolt from the blue that the band managed to land the No.1 spot in our weekly local music power rankings.

More shocking, perhaps, was the ouster of Ynfynyt Scroll from his short-lived Thursday night residency at Beauty Bar. To that end, he and his replacement DJ Colly T — who'll consequently start up his new VIBE residency at the bar tonight — both found themselves receiving some additional shine this week. So too did Blake Ward's announcement that he was adding yet another residency to his weekly schedule, with his new Uptown venture in the loft space above Pozo Mercado.

On the other hand, press for recently-released albums and/or big album release shows earned votes for a number of artists on the list (read: Kaela Sinclair, Mind Spiders, Party Static, Rodney Parker & 50 Peso Reward, House Harkonnen, John Steen). Dorrough, meanwhile, released a new single, “Our Time,” which the Dallas Cowboys have announced will serve as the team's official theme song this season.

Elsewhere: Pat Green opened a new restaurant/venue in Uptown, Dallas drum ensemble D'Drum will get the documentary treatment, Quaker City Night Hawks are heading back into the studio, and Hormones are leaving town for real this time.