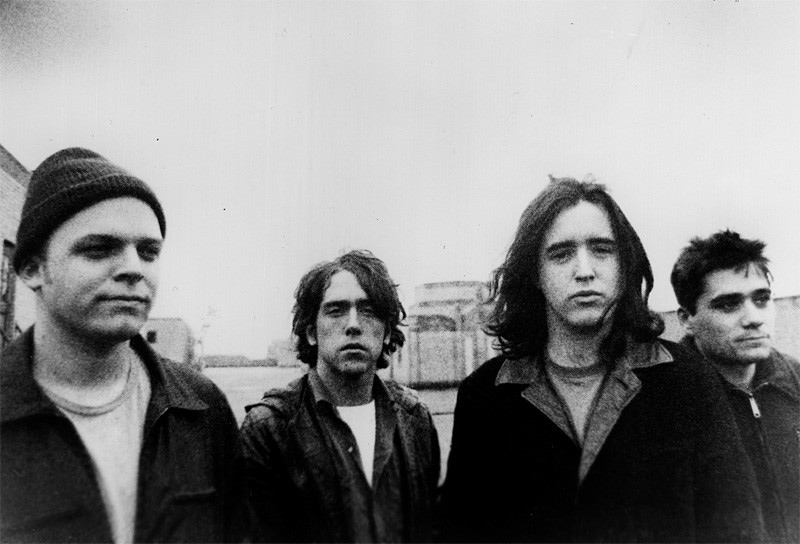 The Buck Pets Were Among The Brightest Stars Of Deep Ellum’s Heyday. Then They Vanished. Why?

The path to rock ‘n’ roll fame and fortune has long been excessively littered with the sad-sack tales of never-weres masquerading as shouldabeens, wouldabeens and couldabeens. We’ve all heard those stories. Many, many times over, in fact, as is the outcome that frankly goes hand in hand with such volume.

Less familiar, perhaps, are the tales of the actually-almost-made-its — the bands that reached high enough to see the top, seemed primed to get over and stay there, and then, for whatever, just didn’t, instead fated to find those final levels just beyond an extended, stretched-out reach that preceded a fast fall.

Arguably the clearest Dallas representative of this second set is a band called The Buck Pets, a group that pretty much had the world by the balls following its come-up in the late ’80s and early ’90s as signees to Island Records.

The brash four-piece alternative rock group basically had it all: Its 1991 single “Libertine” reached as high as No. 25 on the Billboard Modern Rock charts, their videos earned airtime on MTV’s 120 Minutes; they toured alongside and opened for some of the true greats of their time; and, here at home, they were downright revered.

But then, just when things seemed ripe for the band to take the next step, big-time success slipped through the Buck Pets’ fingers: The band watched on as its label home was absorbed by another company; it then frustratingly tried to find its footing with a new record label; and, finally, annoyed by it all and with personal in-band disagreements being exacerbated by the overarching issues at hand, the guys eventually decided to put the whole thing to rest.

For 17 years, at least. In 2010, the band’s final lineup incarnation patched things up and reunited for a what was supposed to be one-off reunion at Trees. Then, just last year, the band did it again, joining their North Texas rock scene successors The Toadies on the bill at the annual Dia de Los Toadies fest.

Now, this coming weekend, the band will go at it once more, performing a gig at the more-intimate Kessler Theater for a show alongside some current and possibly future torchbearers of the scene it helped kickstart. In advance of that performance, we caught up with The Buck Pets’ lead guitarist, Chris Savage, for a talk about why his band is back, where things went wrong the first time and whether a band now 25 years removed from its moment in the sun can still pitch its fastball.

You can read it in full below.

Your band’s story mostly happened well before my time in Dallas, but I’ve always been really fascinated by it: Some Deep Ellum punks form a band, you get some love from the majors who were sniffing around the area at the time, and you get signed; you get to record in the Bahamas; you play with Neil Young, Red Hot Chili Peppers, Jane’s Addiction and The Replacements (with whom you are often compared), and you pal around with the Pixies; the music is great, the acclaim was there and the world looked like your oyster; then, boom, you’re done. I’ve listened to the music. I’ve read the articles. But I still don’t really know where things went wrong — just that things ended on a bad note. Can you help bring some light to that for us?
Well, it just goes to show how quickly things can change. Once Island Records was bought by Polygram, there was a mass purging of bands on the label. We were a casualty of that. We ended up with a deal with Restless, but they didn’t have it together at all. We were still constantly touring, and every place we played people said they couldn’t find the new record anywhere, so there were a lot of things like that. Add to that that the we were all pretty burned out at that point — kind of spent — and we needed a break. The problems with the record companies also created a lot of tension with us as far as the future of the band, and that didn’t help things. I think if we had been able to clear our heads and recharge for a bit, we could have kept going. But, instead, things just sort of fell apart. A lot of that blame, I put on myself. I took a lot of things too personally and was just generally kind of an emotional mess at that time, and it probably wasn’t too easy to be around me then.

Conversely, there have to be some great memories, too, otherwise you wouldn’t be doing this. What are the things you most fondly recall about the band’s first go?
We had some fun and great shows that I remember, and I really loved when we were spending every minute of the day recording and mixing songs. That kind of focus and just working very hard on getting things done is something I miss. But the things that I look back on fondly now are smaller moments, just all four of us being together and maybe throwing a football at three in the morning in front of the bar we had played earlier that night, just drunkenly running around and having fun and laughing together. Those kinds of things are what I remember most.

On a larger scale than with just your own band, can you describe some for us what was special about that era in Deep Ellum? People of my generation hear all the time about how great things were back in the days when the Buck Pets and your contemporaries were coming up, but I’m not sure we necessarily grasp all of it. I’m sure there were a million things that made it great, but is there a somewhat concise way to describe what was so special about that time?
I think it was just a unique place and time where things really came together in a special way. It was the perfect environment for young bands to start. You actually — thanks to the Theatre Gallery and Prophet Bar, initially — had a place to play and watch other bands play. It was the best learning experience musically that we could have had. It was also the only place, for me as a 16-year-old punk rocker, that I felt comfortable being. [It was] somewhere where you felt like you belonged to something bigger, and that you didn’t hate being a part of. In fact, you wanted to be a part of it. That was huge for a lot of us, I think. There were bad times as well a good ones. But, overall, I feel very fortunate to been in that place at that time.

Part of what’s so interesting to me about this Kessler show is that it’s not just a throwback bill at all. You’ve got modern heroes Pinkish Black on there. You’ve also got on there Moon Waves, a band whose members were still about five years from being born when you broke up. Do you have any perspective on how things are now as compared to then that you can share?
I might not be much help there. I’m not sure I had any perspective on it even then. But I do think it’s reassuring that there are young guys and gals giving it a go, and I’m very happy that we could have both Moon Waves and Pinkish Black with us Saturday.

So, I’ve gotta admit: I’d never really listened much to y’all until the Spin article came out in 2009 that named you guys to their list of “The 100 Greatest Bands You’ve (Probably) Never Heard.” Then, pretty much immediately, I got backhanded by people like Robert Wilonsky and Jeffrey Liles for not knowing my shit. So there’s got to be some good that comes from honors like that, even ones that comes so late in the game, since late appreciation is still appreciation. But was that nod at all bittersweet? I imagine it kind of had to have been on some levels — like where was this love when you needed it.
I know what you mean about it possibly being bittersweet, but I honestly haven’t felt like that — at least not in a long time. It does feel good to be recognized in things like the Spin list, but I think all of us take that kind of thing fully in stride. I mean, we’ve heard it all before, like “They’re the greatest!” and “They absolutely suck!” You learn not to put much stock in either.

In 2010, not long after that article came out, you guys reunited for a show at Trees — and, at the time, 17 years after breaking up, that show was sort of billed as a final hurrah. It wasn’t, though: You played Dia de Los Toadies last year and now you’ve got this show this weekend. Why keep playing? Do you think you’ll continue to do so?
I really don’t know if we’ll do it again, but I’m pretty open to the idea. At this point, I guess every show could be our last, so I’m just enjoying the moment. Why keep playing? Well, for me, I just love playing with those guys. The rehearsals, the shows, all of it. People use the term “brother” a lot, but that’s what we are to one another. We spent a lot of our lives together growing up and doing some fairly amazing things, and I will get together with them to make some noise any chance I get. The thing that’s special about playing now is that it’s all for the love of playing the songs and being together. We’re doing it simply because we want to, and we have been given the chance to. I’m very grateful for that.

At the 2010 reunion, you released a collection of rarities and demos. Any chance there’s new music on the way?
I hope so. I had a song I was working on recently and I thought, “Man, I’d much rather hear Andy [Thompson] sing this than me,” and Ricky [Pearson] and Ian [Beach] are the best, so that would be exciting. Dang, you’ve got me really thinking about that now!

I really do enjoy y’all’s music, but I just wasn’t able to make the last few shows, and I imagine there are others like me who are curious in advance of this next show what you guys sounds like now. So, please, even if it’s a lie, just tell me you guys still play loudly and that you’ve still got your fastball.
Thanks, Pete. And no need to lie: We are every bit as loud as ever, and the fastball is about the only pitch we know. So…

The Buck Pets perform with Pinkish Black and Moon Waves at the Kessler Theater on Saturday, January 30. Get tickets and more information here.