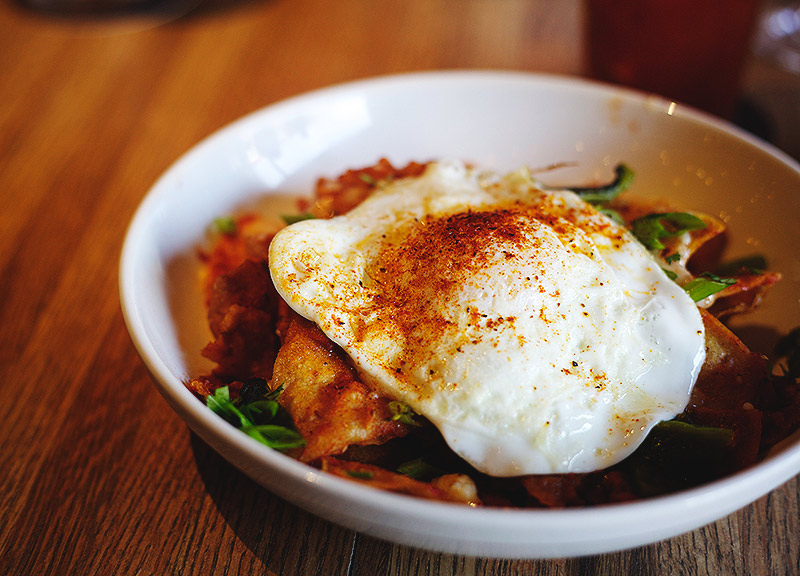 At These Seven Killer Spots, The Best Meal of The Week Doesn't Start So Late.

The best part about brunch is that it's the meal during which it's most acceptable to get stupid drunk. The second best part, far as the meal itself goes, is that you can make it breakfast, you can make it lunch or you can mix it up and do both at the same time.

But there is a downside to brunch, too.

Here's the worst part about Dallas' favorite meal: If you wake up too early, you'll have to wait a couple of hours before anyone starts serving it.

It's a problem. God forbid you wake up before, say, 10 o'clock on the weekend. You're still more than two hours away from bunch service starting, which doesn't happen until noon at most establishments. And, OK, let's just be real honest here: There's nothing worse than waking up next to a partner and not having anything to do or any food around to eat to keep the energy alive and the good vibes rolling.

Fortunately, there are, indeed, a few saviors out there — legit awesome brunch spots that cater to the restless-early-rising set by serving brunch before the traditional noon hour.

Here, we take a closer look at just such establishments.

Sure, some of the ones listed in this post start serving just a mere hour before high noon — but they're still worth the wait, even when you're awake and hungry at 8 o'clock in the morning. On the other hand, some of these places start their service as early as 7 a.m., with others open 24 hours.

Either way, early risers, this one's for you.

Jonathon's is located right next to Spiral Diner out in Oak Cliff, but if you're not looking, you could miss it, as the spot operates out of what could easily be mistaken as the cutest house on the block. But the patio is awesome and the food is well worth the table wait times almost always forced upon potential eaters upon arrival. The way around that? Get to Jonathon's early enough and there's usually not much of a wait at all. Also? Your sleepover date will be impressed. Order the chicken and waffles, for sure; the chicken is boneless and the waffle is as big as the plate it's served on. And, if you're a vegetarian, that's OK, too. Just order the peanut butter-stuffed waffles instead. Also? Order a drink. The D.I.Y Bloody Mary bar is amazing.

Yes, even people on gluten-free diets sometimes enjoy a hefty appetite for pancakes the morning after a night out. Company Cafe is ready for them, too, with their natural and organic menu offerings. Every order can be made gluten-free, and all the eggs and meats served at this company's two spots are either cage-free or free-range. To top it off, the cafe buys its fare as locally as possible. We highly recommend the Veggie RX to any vegetarians on the prowl; the vegetables are ridiculously fresh and cooked just right. Those “going hard” or those who got “suckered in” to eating at a vegan/vegetarian/gluten-free cafe, might prefer the Deep Bowl, with its grass-fed beef and sweet potato hash, all topped with avocado and two cage-free served eggs any style. Point is, no matter what you order, you won't have to feel guilty about the consumption. And, if you're at the Katy Trail location, you can run or ride your bike back home. Healthy, bro.

Jo24 only opened in August, replacing Jack's Southern Comfort Food, but it's already receiving great praise from the locals. And here are four reasons why: B.Y.O.B. Yep. Go ahead, buy your favorite bottle and bring it on down. Jo24 will provide you with the glasses and the juice and let you pour up your own mimosas (or, really, whatever cocktail concoction you've decided to help your brain out the morning after) to your heart's content. They'll even ice the bottle or refrigerate it for you. And you can bring your own juice, too, if you're really craving pulp or whatever. Beyond boozing, though, you can enjoy some seriously tasty and good ol' southern-styled breakfast here. Bacon, eggs, sausage and biscuits, chicken and waffles, pancakes — all the usuals. Except, here, “the usual” is legit good, and comes at an affordable price, too. Even better, all of the meat and produce is sourced locally as much as possible.

HG Sply Co. recently kicked off its Sunday brunch recently and will be continuing this brunch offering every Sunday henceforth, starting at 11 a.m. Moving on, there are many great things to say about this young new “Hunter and Gatherer” Lower Greenville restaurant. For starters, the HG crew is set on creating everything by hand (hence their name). The hand-crafted goodness doesn't stop with the drinks. Let's face it: Everyone has craft drinks anyway, and HG has already taken that further with hand-crafted ice, perfected in variety to pair perfectly with each beverage served. But that care is also evident in the food. Take, for example, the chocolate cake. The recipe for this insanely pleasing dessert took the staff five weeks to prepare. Why? It's that whole innovative hand-crafitness thing. The cake recipe was made sans flour and sugar. We're talking a gluten-free, fudge-like cake that pairs ridiculously well with the fresh fruit plate. It's a meal by itself. But, for those looking for more of a protein-based entree, the Chilaquiles or the Steak and Eggs is what to order. The spinach on the plate of the Steak and Eggs looks so fresh, it's like it's still alive or just hand-picked from a nearby outdoor garden. The plate is colorful with the sweet potato hash, too. As for the steak, even a non-red-meat-eater would chow down on this cut. HG is maybe the one brunch place where one could chow down — over-chow, even — and still have enough energy and feel-goodness to go on with his or her day.

For one thing, opening at 10:30 in the morning tops opening at 11 a.m., which tops opening at noon. For another, a brunch with an organic Italian twist is a nice change from the norm. And the lively Italian trattoria Villa-O certainly makes its mark in that regard, offering interesting brunch items in big portions. Get the Portobello Mushroom Fries to start out (although they do also offer complimentary artisan bread for munching), then maybe go for the Beau Nash Pizza (smoked salmon, organic dill cream cheese, red onions and capers) or the Ricotta Cheese Blueberry Pancakes. The chicken and waffles isn't too shabby, either. And Villa-O isn't a bad place to grab a drink-filled brunch either. Take note: The bottomless Bloody Marys and Mimosas only cost $10. Have two and they start to pay for themselves.

If you're on the tail end of waking up early, this is the brunch for you. And, let's face it, showing up for a drink at 11 a.m. probably looks better than asking for the drink menu at 8 a.m., anyway. I digress. A carafe of the Blood Orange Mimosas is a must-order here. Beyond that, the Sundown brunch menu is like a weird relative of the Sundown lunch and dinner menus; the ever-loved Free Bird sandwich is still available at brunch, and the Buddha Wrap (quinoa, avocado, spinach, eggs, feta, drunken mushrooms, chipotle cream and basil) is like the breakfast version of the Vegetative State. For the even hungrier, there is also the Buddha Burger — a humongous, vegetarian, drool-worthy spectacle with sliced avocado and the whole nine yards (including sweet potato fries on the side). Feeling adventurous? Try the Pop Rock Creme Brulee French Toast, which features whipped cream, strawberry sauce, blueberries, and strawberry pop rocks on top of sweet and delicious French toast. Then maybe schedule yourself an afternoon nap.

Hattie's is like the fancy diner you take your first date on, because, hey, it looks nice, but you can still afford it. So, wake up the person laying in bed next to you and treat them to some breakfast in the Bishop Arts District. Make sure you have a reservation, though, as Hattie's is a small, albeit beautiful, space. Also? Make sure you throw on more than sweatpants. The Hattie's crowd tends to be posh-casual. Then get ready to eat. The chef at Hattie's specializes in “Low Country” cuisine, meaning southeast, coastal-inspired dishes that center around traditional recipes with a modern twist. Take, for example, the Fried Green Tomato Sandwich, the Low Country Shrimp & Cheddar Grits or the Chicken and Waffles — each of which has been perfected to a high standard of both taste and presentation. Hattie's also gets extra points from its meat-lover entrees such as its Home-Style Bacon-Wrapped Meatloaf.

All photos of HG Sply Co. 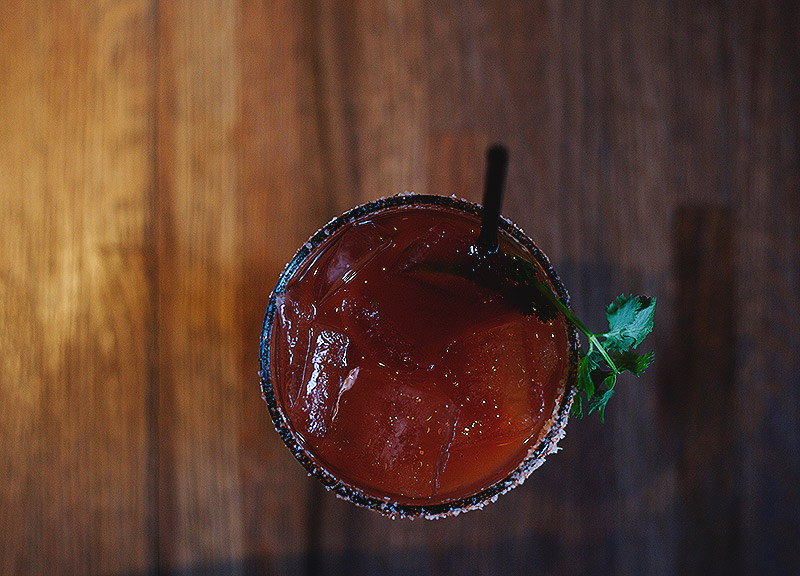 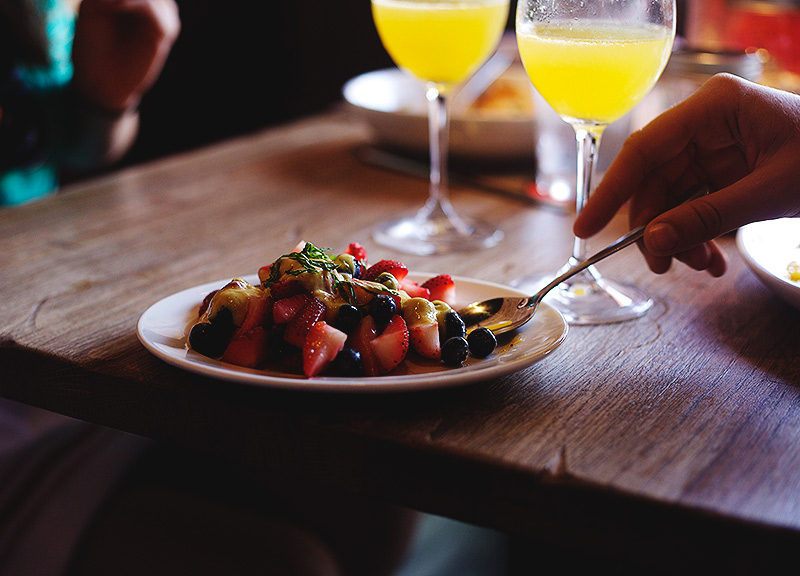